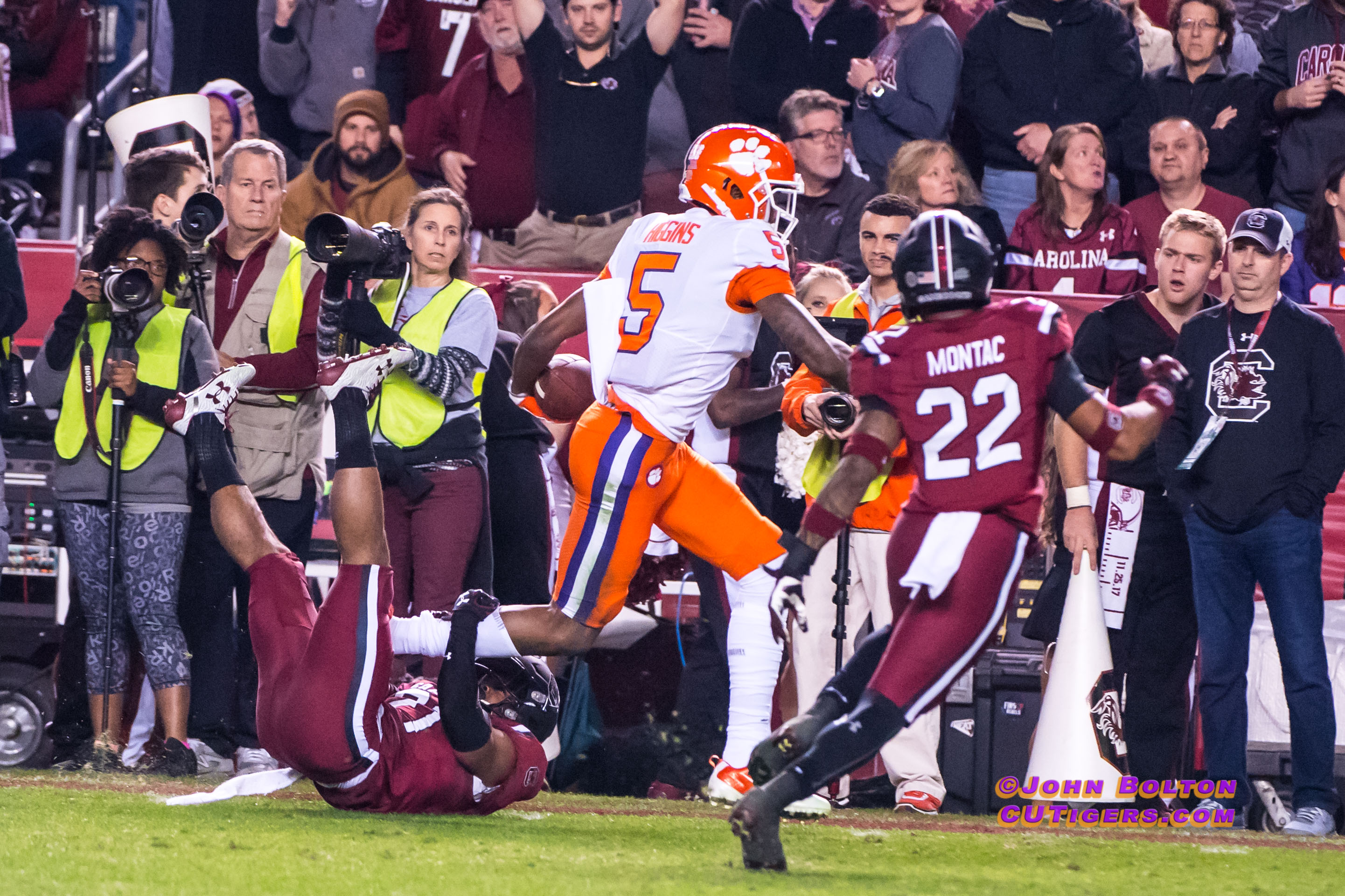 
WHAT WE ARE HEARING: PREVIEW & PREDICTION FOR NO.3 CLEMSON AT SOUTH CAROLINA

Welcome to the Palmetto Bowl edition of What We Are Hearing!

It’s hard to believe, but here we are in the final game of the regular season already, and the Tigers are looking to wrap up their second consecutive perfect regular season with a sixth straight win over the Gamecocks, who have clinched a losing season and will not be going bowling for the first time since 2015. But that means they will be selling out and putting everything on the line in the hopes of ruining the Tigers’ 26-game win streak, the longest in the nation and tied with Alabama for the longest since….. Despite the unusual bye for both teams last week, it wouldn’t be rivalry without a healthy dose of trash-talking, and the Gamecocks’ radio commentator Todd Ellis provided just that, saying that Dabo and the Tigers provoked Gamecock fans’ low-class behavior when they threw bottles at the Tigers during the Walk of Champions two years ago. Dabo was asked about the remarks, and he correctly said they were ridiculous. The Tigers have been doing the Walk of Champions as a part of their pre-game routine every game for the last 20 years, and the only fans that have ever thrown things at the Tigers are those in Columbia. Of course, Gamecock fans have not withheld their childish antics for the Tigers alone. They threw things on the field in anger during the Florida game in response to a pass interference call they didn’t agree with. Apparently, not only will the more mature Gamecock fans neglect to self-police the childish, low-class ones, but the South Carolina administration won’t reign in their own either. It’s safe to say there will probably be even worse behavior on Saturday as a result of all the attention it has received, and I will probably have to wear a helmet or at least bring an umbrella with me down to the field before kickoff.

Let’s just hope the Tigers can maintain their composure as they have always done so well under Dabo and take the moral high road. The Gamecocks were able to sucker the Tigers into a bench-clearing brawl in 2004, and that is the only reason the Tigers don’t have the third-longest bowl streak in the nation right now, as they opted to skip the bowl game in 2004 as an act of self-discipline. That was Dabo’s second year on the staff as WR Coach.

On to the game!

As mentioned, the Gamecocks have already clinched a losing record at 4-7 coming into the game, so they know they won’t go bowling this year—though that might be better than their 28-0 loss to UVA in the Belk Bowl last year. Muschamp’s seat is starting to heat up to the point of necessitating votes of confidence from his Athletic Director and President. For the Tigers, a bye might have been a detriment if anything, as they had been playing better than any team in the country for the last 6 weeks, but the bye came at a perfect time for the Gamecocks, who are limping into the Palmetto Bowl, both literally and figuratively. They have suffered a multitude of injuries this season, beginning with losing 4-year starting QB Jake Bentley in the season-opening loss to UNC, and most recently All-SEC WR Bryan Edwards, who has the school record for TD receptions—more than Alshon Jefferey and Sterling Sharpe. Edwards had his knee scoped to repair his meniscus and did not play in their 30-6 loss at Texas A&M two weeks ago. He played hurt in their loss to App State. It’s still unknown whether he will play in the Palmetto Bowl, and Muschamp said he is questionable on Tuesday. I’m sure Edwards would love to try to beat Clemson in his final game as a Gamecock, but he may decide to make a business decision and avoid the risk of injury with millions of dollars on the line. Clemson grad transfer Tavien Feaster is probable for the Palmetto Bowl after missing the last two games after injuring his hamstring against Vandy. The Gamecocks’ other leading running back, Rico Dowdle, injured his knee against Florida and missed the Vandy game, but he should be ready Saturday. Third-string Mon Denson has also been battling a neck injury but is expected to play on Saturday. As if that’s not enough, WR OrTre Smith missed the last game but is probable for Saturday, WR Shi Smith has been battling a hamstring and they lost DT Keir Thomas, who will take a medical redshirt this season, but he has played the last two games and will likely play Saturday as well. TE Nick Muse, brother of Clemson senior starting safety Tanner Muse, tore his ACL a few weeks ago and will obviously not have a chance to play against his brother to the dismay of the Tanner family. Those are just some of the more notable injuries that have plagued the Gamecocks this season. They will also be down 3 more receivers in Davis, Dawkins and Vann as well as a couple offensive linemen.

Freshman QB Ryan Hilinski has played admirably at times but has also looked like a freshman at others. He was thrown into the fire early when 4-year starter Jake Bentley was injured at the end of the opener against UNC, and Hilinski has been the starter ever since, periodically being spelled by dual-thread QB Dakereon Joyner. Clemson recruited Joyner as an athlete, but he wanted to try to play the quarterback position at South Carolina. Joyner actually had to finish the game in Athens when the Gamecocks upset UGA in double-overtime. Hilinski has completed just 58% of his passes this season for 2,252 yards, 11 touchdowns and 4 interceptions. He has rushed 31 times for -42 net yards and one touchdown.

Feaster leads the team with 5 rushing touchdowns and averages 5.6 yards per carry, a couple yards per carry less than his career average at Clemson. Dowdle has 4 rush TD’s, and QB Dakereon Joyner has one. Bryan Edwards, obviously, leads the team with 6 TD receptions, followed by Smith and TE Kyle Markway with 2 each. Freshman WR Xavier Legette has just 9 receptions this season, but he has good size and could have a coming-out game if Byran Edwards doesn’t play.

On the defensive side, senior DT Javon Kinlaw (#3) is the most talented player the Gamecocks have and is a potential NFL first-rounder. At 6’6, 310 pounds, he leads the team with 6 sacks and is a disruptive force in the trenches. On the back end, look out for sophomore Israel Mukwamu (#24). He is a very physical corner and has unusual size for the position at 6’4 and 205 pounds. You may recall his huge game in the upset win at UGA, recording 3 interceptions of Jake Fromm, including a pick-six. Should be a great matchup between him and Tee Higgins and/or Justyn Ross in the boundary. In the middle, the Gamecocks are led by linebackers Earnest Jones (#53) and senior T.J. Brunson from Columbia. Jones leads the team with 53 solo tackles to match his number and has a sack, and interception and a forced fumble. Brunson is second on the team in tackles and also has an interception and a fumble recovery.

Junior kicker Parker White from Mt. Pleasant has had a good season. He’s 21-25 with a long of 50 yards. He is 1-4 over 50 yards but 6-6 from 40 to 49 this season. Joseph Charlton might be the second-best punter in the SEC behind reigning Ray Guy Award winner Braden Mann. Charlton averages 48 yards per punt with a long of 66.