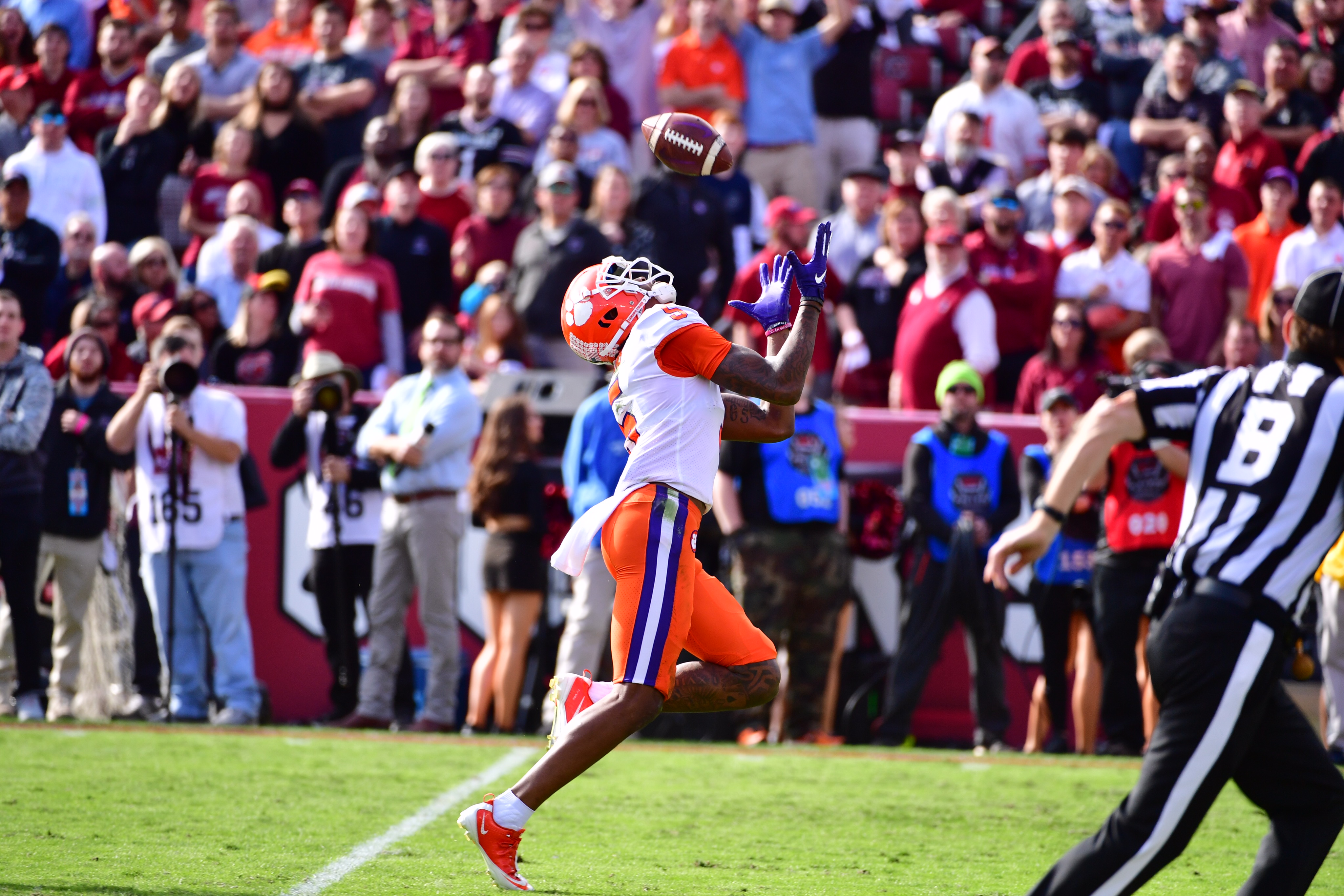 COLUMBIA, SC – Apparently the bye week did not disrupt the Tigers’ momentum or focus whatsoever because they dominated the Gamecocks from start to finish the same way they had each of the previous six opponents. It was the third time the Gamecocks had an opportunity at home to spoil a perfect season for their in-state nemesis, but the Tigers were having none of it and walked out of Columbia with a 38-3 win. They have beaten the Gamecocks six straight years—the longest streak for either school since the Tigers won six in a row in the 1930’s—and they have outscored the Gamecocks 184-55 in the last four meetings. The Gamecocks have scored single digits in three of the last four.

The game did not start slowly, as the Tigers marched right down the field on their opening possession, but the Gamecocks came up with a goal line stand, stopping the Tigers on four plays inside the 5-yard line to force a turnover on downs. However, the Tigers would quickly seize momentum back when SC native Derion Kendrick intercepted freshman quarterback Ryan Hilinski and returned it to the Gamecock 23. This time, the Tigers capitalized on their opportunity and Trevor Lawrence threw a beautiful touchdown pass to Tee Higgins in the corner of the end zone on 3rd and 9. Higgins would also score the Tigers’ next touchdown on another perfect pass from Trevor down the seam, and with that Higgins became the first player for “WRU” to post 10 TD receptions in consecutive seasons. It’s just remarkable how many program and ACC records this team has broken. Higgins had just three catches in the game, but they went for 101 yards and two touchdowns. He nearly made a spectacular catch early for a big gain, but the DB was able to knock the ball out at the last second. Justyn Ross also had a big game with 9 catches for 111 yards and a touchdown, his 7th of the season.

Sir Lawrence continued his regal play both through the air and on the ground, going 26-36 for 295 yards and 3 touchdowns with no interceptions. It was his 7th straight game with at least 3 TD passes, extending his Clemson record. He also rushed for 66 yards, a new career high, on 8 carries. Two of the runs were big 3rd down conversions. To me, that is probably the biggest difference between the offense this year and last. Trevor’s running has really become a weapon, and he has shown the ability to score and extend drives with his legs when the receivers are all covered. Teams are going to have to start accounting for it with a spy, and that will make it even harder to cover all these receivers, backs and tight ends.

Travis Etienne did not have the production we’d seen over the previous six games, rushing for over 100 yards in each, but he did score two touchdowns to break James Conner’s ACC career TD records, both for rush TD’s and all-purpose TD’s. He finished with 51 yards on 3.4 yard per carry, and that is a result of the Gamecocks loading the box to stop the run. The Tigers exploited that scheme with the big passing plays. Lyn-J Dixon continued his steady production with 60 yards on 12 carries. 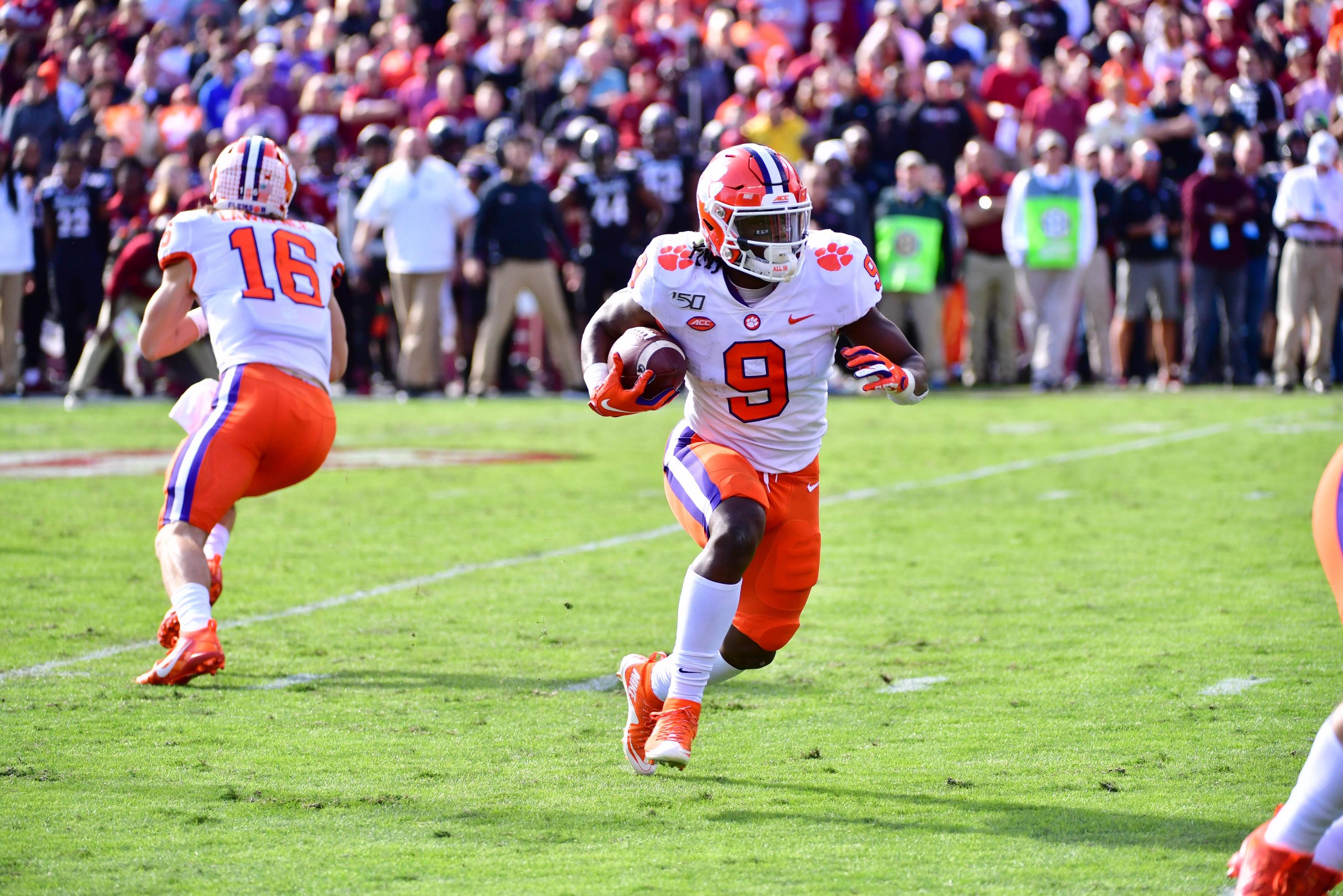 The story of the game, though, and really the season was the defense. They allowed just 174 total yards and 3 points. The 105 passing yards put the Tigers back ahead of Ohio State for the No.1 pass defense in the nation after a one-week hiatus at No.2. The Tigers have held all 12 opponents under 300 yards this season, and that’s the first time any team has done that since at least 1996 according to retired SID Tim Bourret. Even the reserves were able to come in and keep the Gamecocks off the scoreboard. LB Mike Jones made a terrific pass breakup to force a turnover on downs, and his teammates celebrated the play like it was the biggest of the season.

The Tigers played a clean game on both sides of the ball, not turning the ball over and winning the turnover margin. Will Spiers had perhaps his best career game, pinning the Gamecocks inside their 10-yard line on both of his punts and averaging 47 yards per. The only real disappointment of the game was Potter’s missed 32-yard field goal. For whatever reason, he continues to struggle on the close ones from the right hash. Perhaps Dabo will give Sawicki another opportunity on the short field goals.

The Tigers are 12-0 for the second straight season, the third time in five years and the fourth time in program history. They extended their win streak to 27 games, which is the longest streak since FSU won 29 from 2012 to 2014. If the Tigers go on to win their second straight national title, they will break that mark! Next up is the ACC Championship Game against UVA, which will certainly be ranked this week and is the 5th different opponent the Tigers will face in 5 years at the ACC Championship. Astoundingly, all 7 teams in the Coastal Division have now won the division over the last 7 years. That will never happen again, folks, maybe in any sport. If the Tigers win their 5th straight ACC Championship Game to lock up a 5th straight College Football Playoff, Clemson will be the first school ever to win 5 consecutive conference championship games. Clemson and Florida are the only schools to have won 4 in a row. If the Tigers take care of business and beat the Wahoos, Clemson and Alabama will be the only to programs to have made five consecutive trips to the College Football Playoff! After losing at Auburn yesterday, Alabama will not be making a sixth trip, so there will be no Clemson vs. Alabama V this year.

I’ll have the ACC Championship Teleconference with Dabo and Bronco Mendenhall posted for you on Sunday evening, so stay tuned!