CHARLOTTE, NC – As I expected and predicted, the ACC Championship Game was just more of the same dominance we’ve seen from the Tigers since their one close game of the season at UNC in late September. It was a shaky start for the defense on the opening possession, as UVA hit a big pass play just like UNC did on its opening possession, but Nolan Turner came up with an interception in the back of the end zone—his second pick of the season—and that turned the early momentum in the Tigers’ favor. It didn’t take them long to capitalize on the turnover, either. 5 plays, 80 yards and 1:34 later, Tee Higgins streaked into the end zone to put the Defending Champs up 7-0. 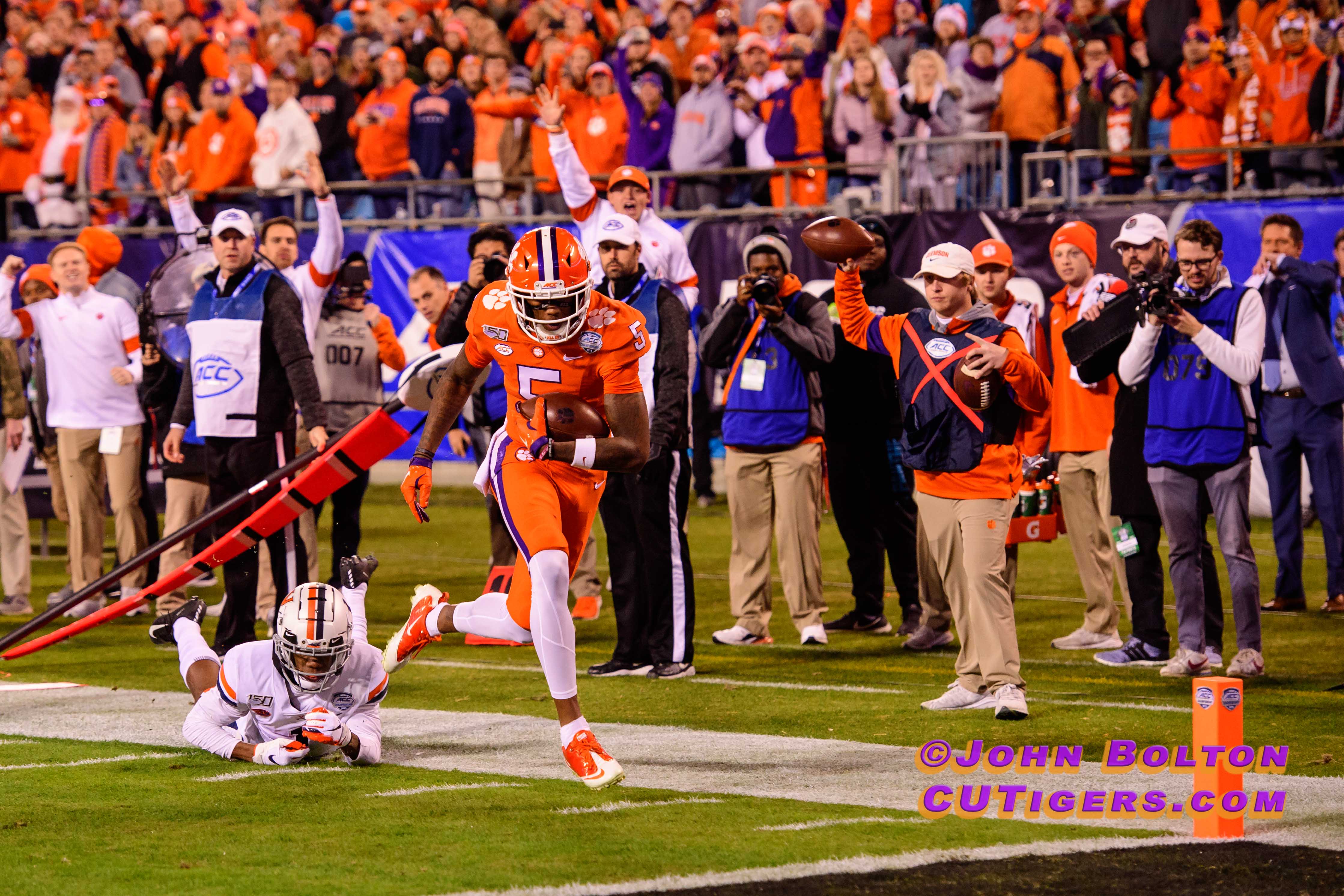 The Wahoos didn’t fold, though. With All-ACC receiver and return weapon Joe Reed out with an injury, I knew they would rely heavily on Hasise Dubois, and that’s exactly what they did. He made the big catch on their opening drive and then made another for a 20-yard touchdown to tie the game 7-7. However, the Tigers’ offense was just too much for the ‘Hoos. They marched right down the field again—this time in 4 plays for 75 yards in 1:36—to go ahead for good. This time, it was Trevor Lawrence to Justyn Ross for a 59-yard touchdown, which was the second-longest pass play in ACC Championship Game history. 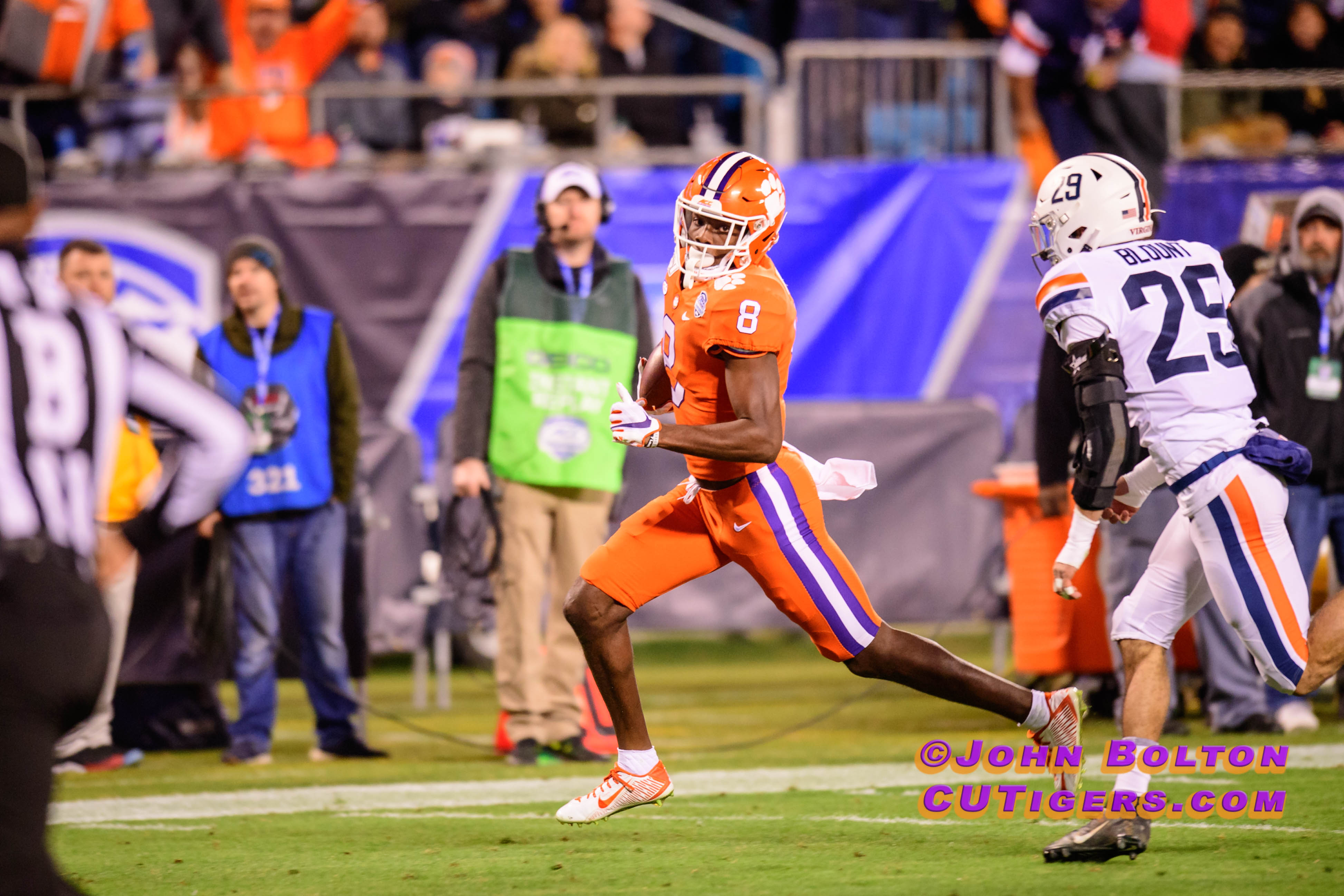 It would be a record-setting night for the Tigers, as seemingly every game has been over the last month. Tee Higgins finished with 182 yards and 4 TD’s and Trevor Lawrence threw 4 TD passes—all ACC Championship records. The 62 points scored by the Tigers also broke the previous ACC Championship record of 45, held by both Clemson and FSU. Higgins made three unbelievable circus catches in the first half, and he was named MVP. He also tied Nuk Hopkins and Sammy Watkins for most career TD catches (27) in Clemson history. That’s some pretty lofty company at “WRU!” Higgins now has 13 TD’s on the season. 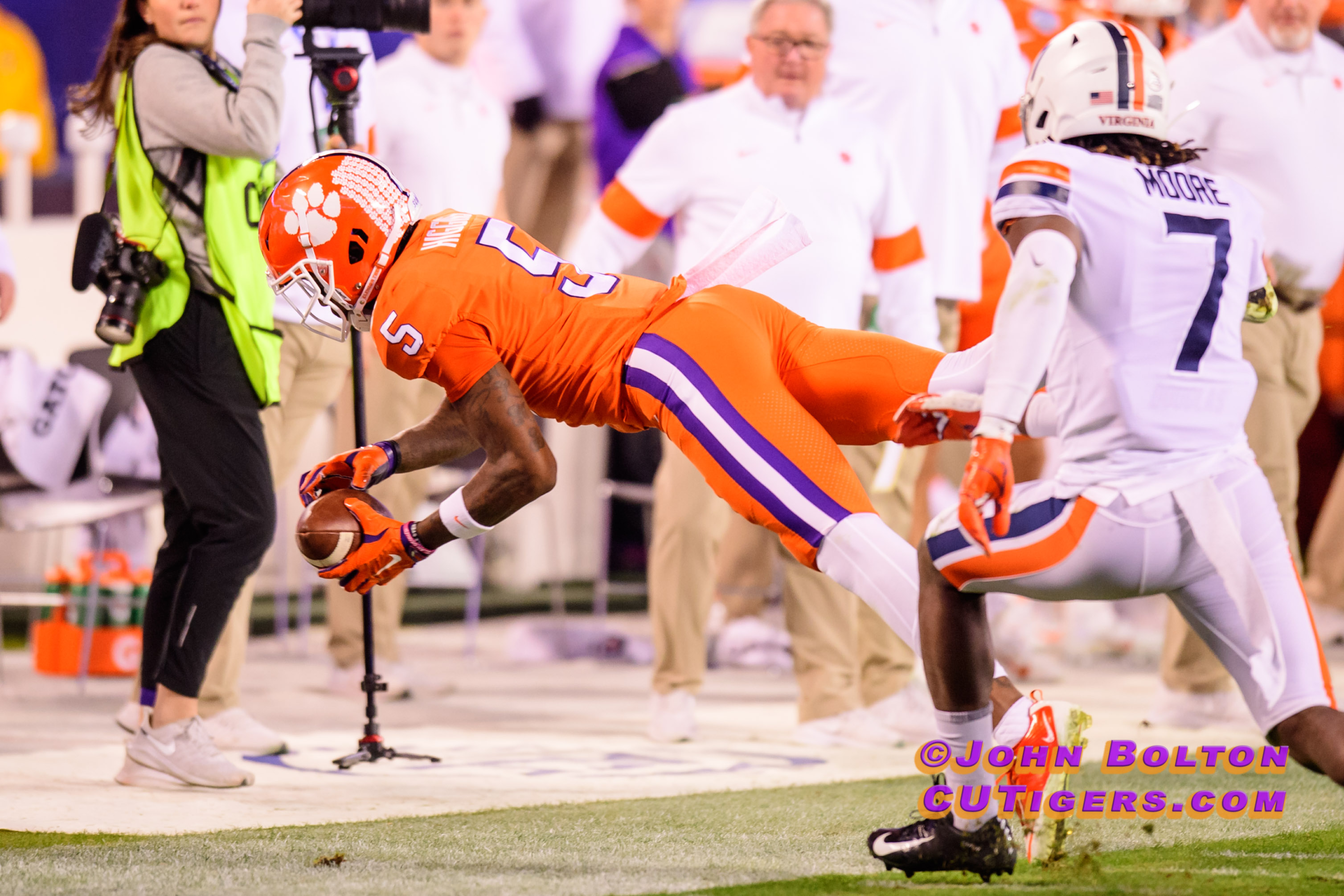 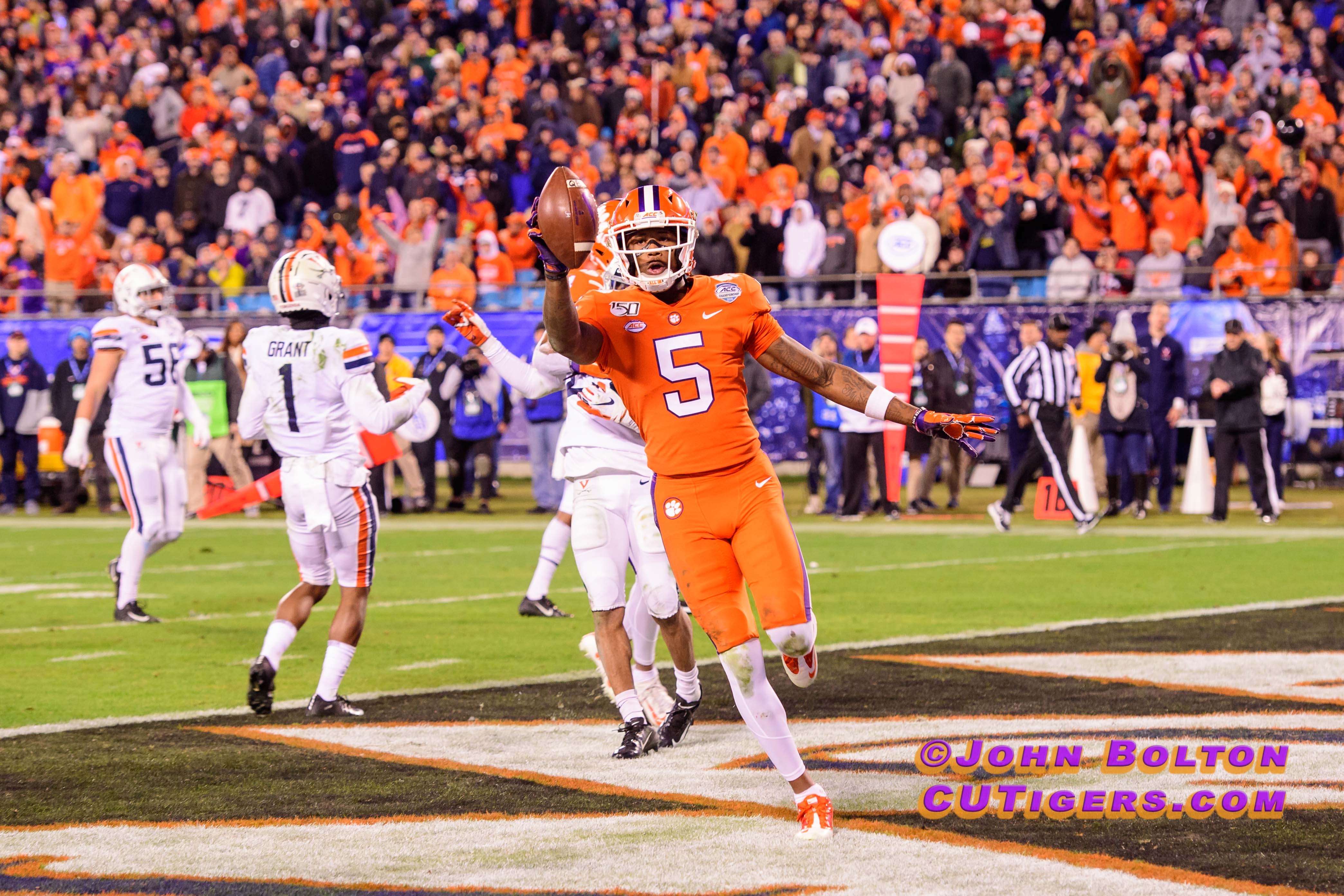 Trevor Lawrence continued his astounding efficiency, going 16-22 for 302 yards with 4 TD’s and no interceptions. He’s now thrown 20 touchdowns without an interception over the past several games. He extended his Clemson record to 8 straight games with at least 3 TD passes. Trevor didn’t run much, but he made a couple big plays with his legs, as he has done with regularity this season.

Travis had a productive game like he normally does, rushing for 114 yards and a touchdown, extending his ACC career record. He did have a bad drop on a wheel route, which would have added about 50 yards to Trevor’s pass total. That is something we haven’t seen from Travis all season—he’s been a very reliable pass-catcher unlike his first two seasons. 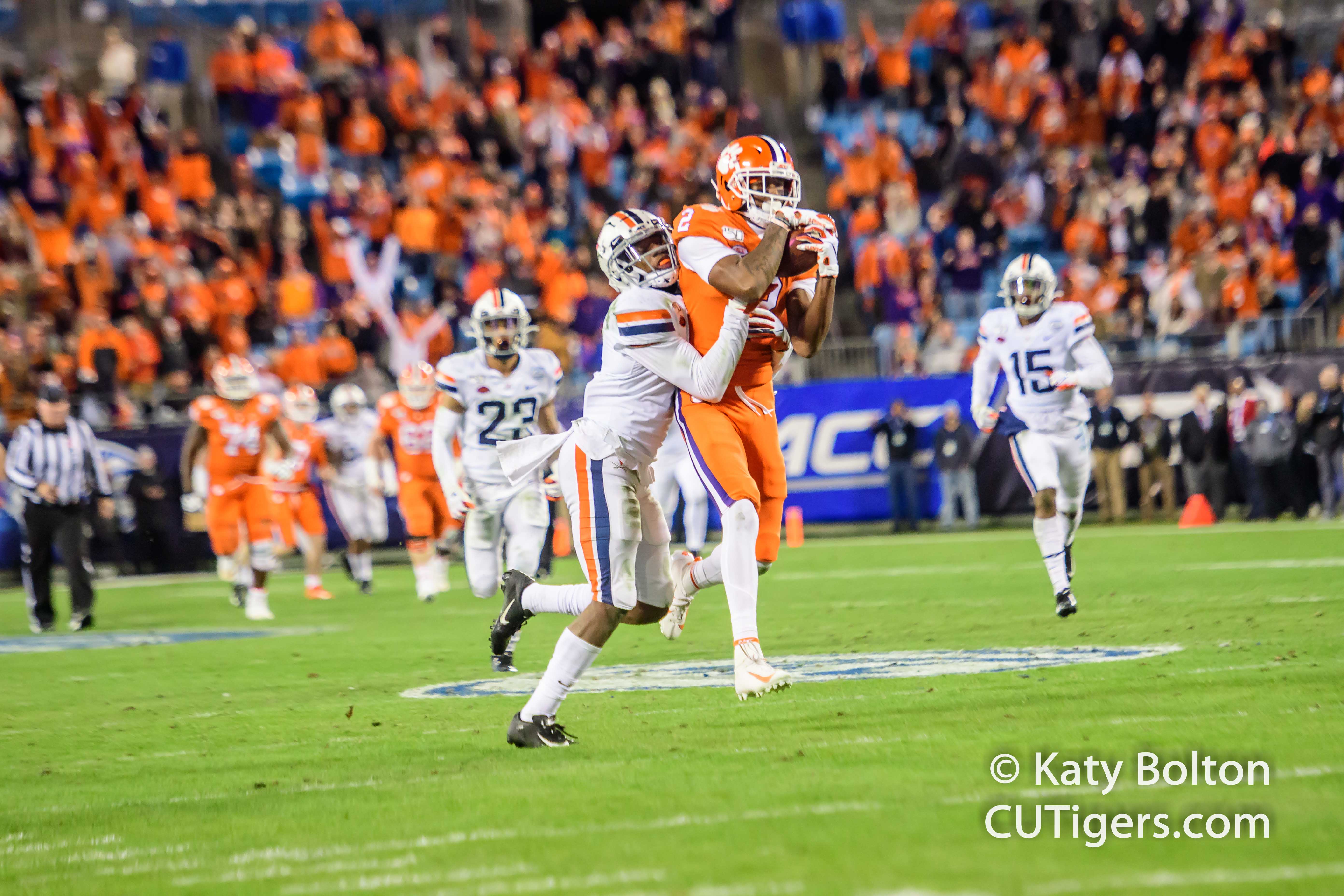 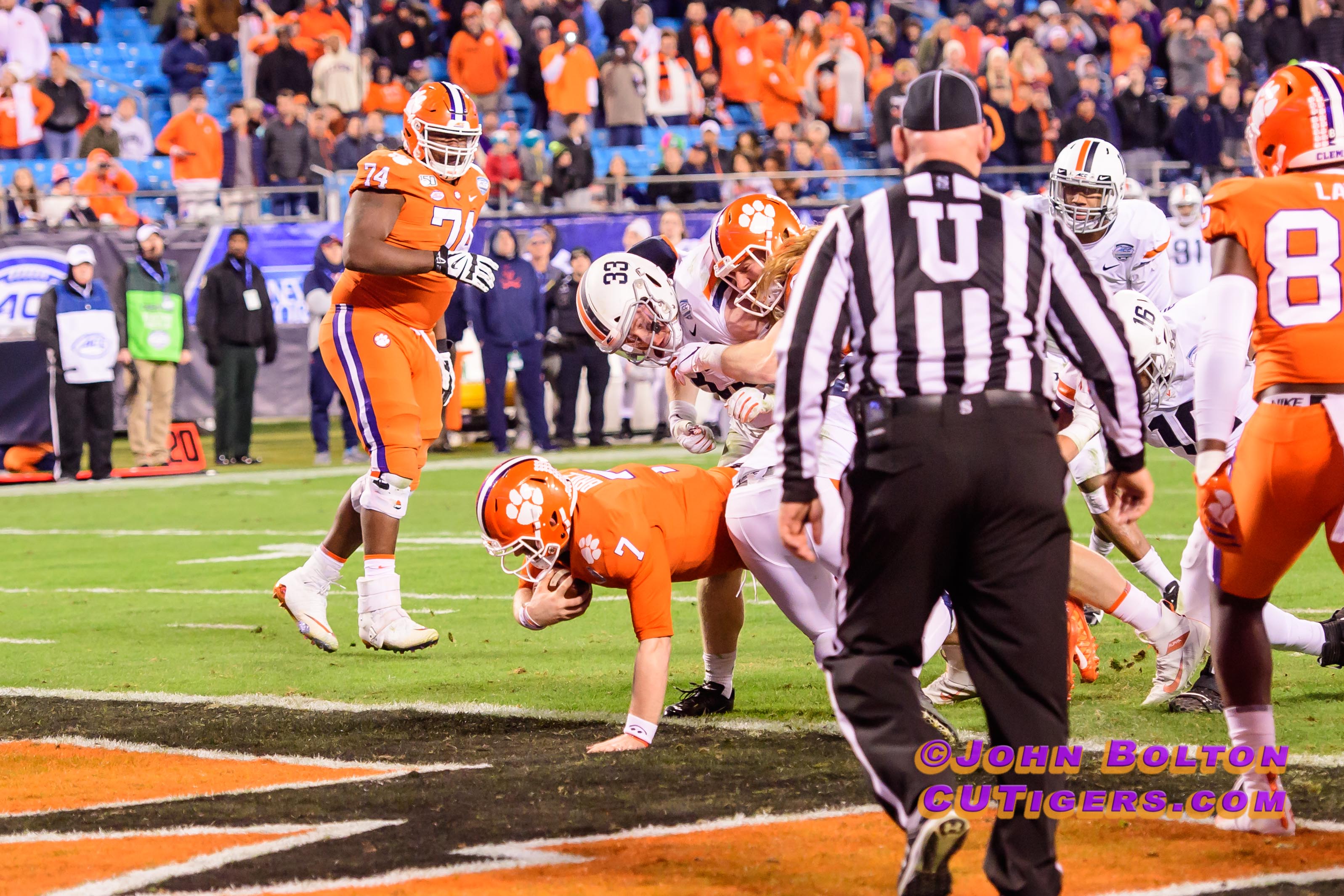 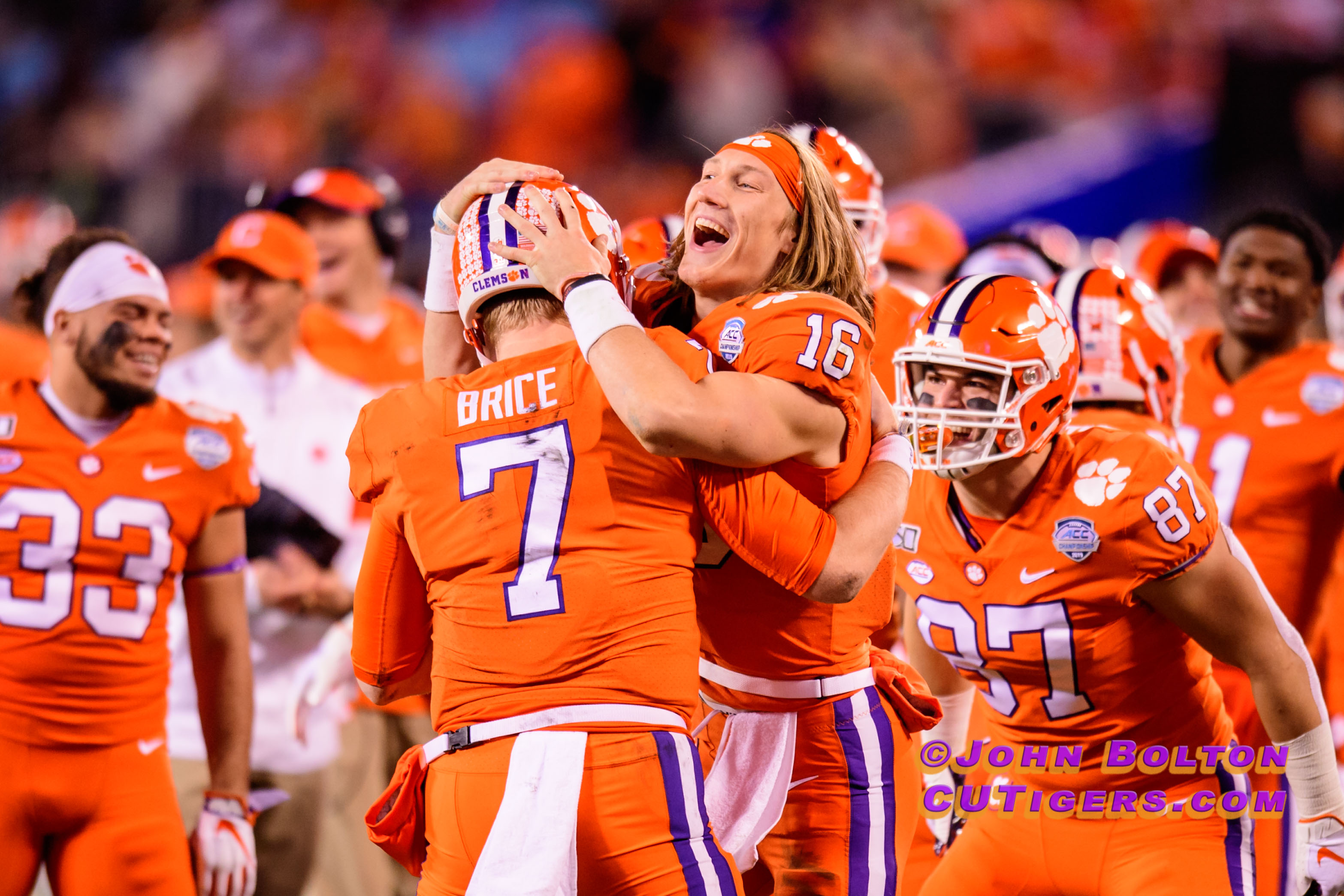 The offense didn't stop in the second half when the starters came out of the game. Chase Brice made a great 57-yard pass to Frank Ladson, which set up Brices' first career rush TD. Freshman RB Chez Mellusi would also find the end zone in the waning minutes.

The only disappointment, if there was one, was that the defense’s remarkable streak of 12 games holding the opponent to less than 300 yards came to an end, as UVA finished with 387 total yards. Those first couple drives were the difference. After that, the Tigers really settled in and stifled the ‘Hoos, who had the second-best offense in the ACC behind the Tigers. UVA was 10-18 on 3rd down, which is much better than the Tigers usually allow, and Dabo told me after the game that there will plenty on tape for the team to learn from and improve upon. He said this game will make them better, and they will have almost 3 weeks to prepare for their next game in the College Football Playoff. The Tigers still have the No.1 scoring defense and No.1 pass defense, and they created 3 turnovers without giving the ball up, making them +14 in the turnover margin, which is by far the best Dabo’s ever had. The versatility of Butkus Award Finalist Isaiah Simmons was on full display, as he was all over the field on Saturday night and recorded his second interception of the season. You could make the argument that he is the best defensive player in the nation. 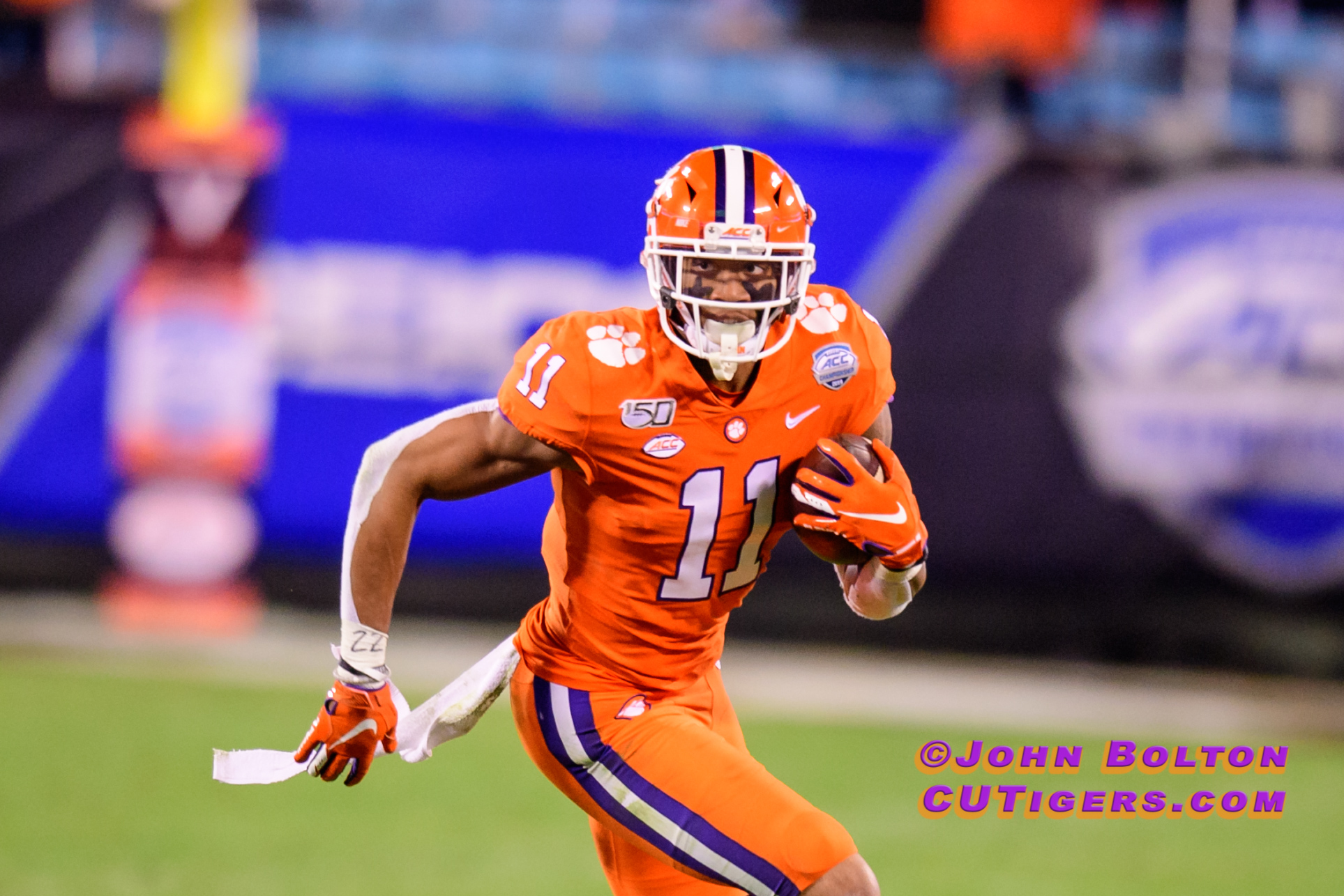 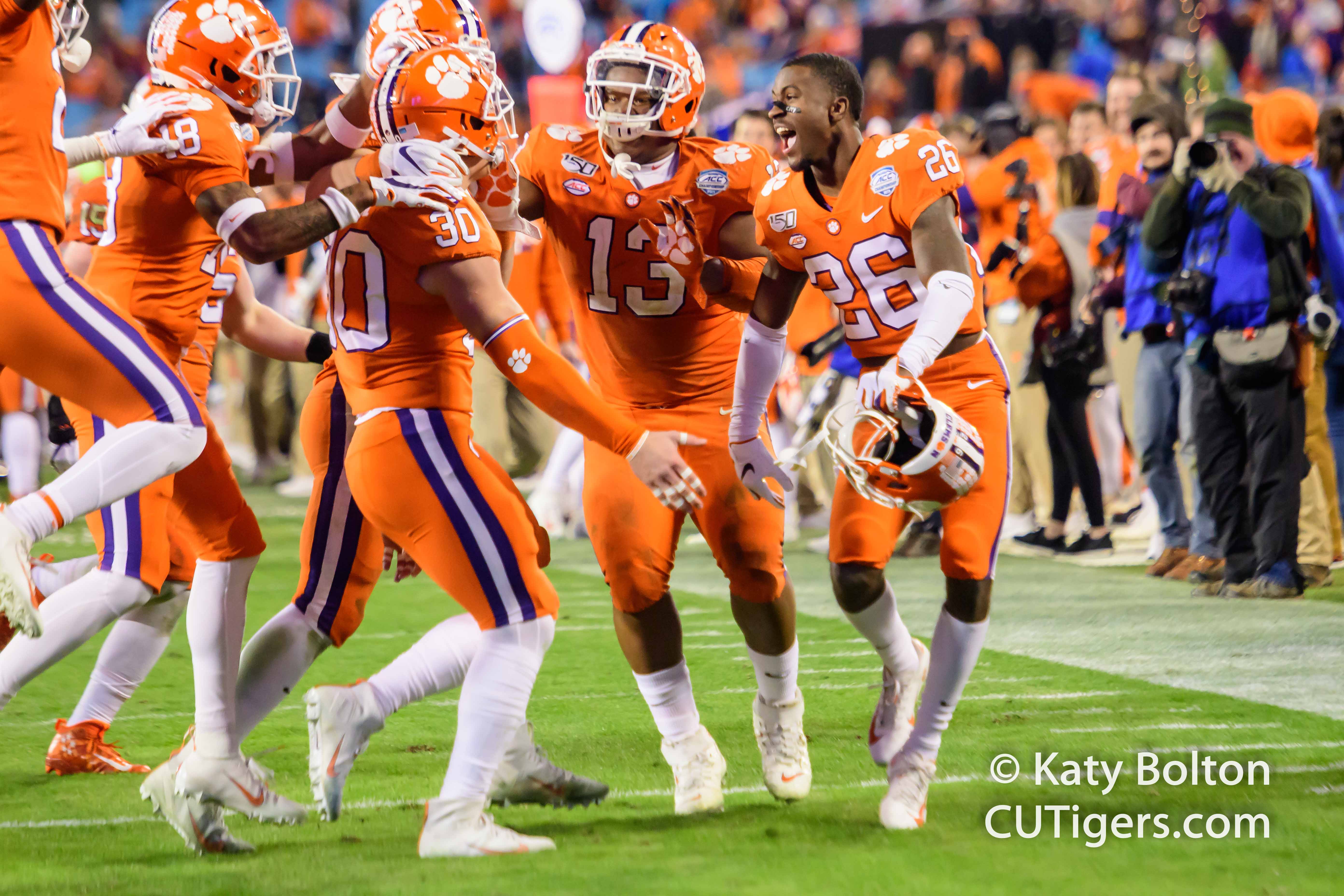 Potter was 2-2 on field goals, including a 47-yarder, but Dabo bailed him out with a last-second timeout call before he missed from 52. Potter missed a second time from 52 but was bailed out again by an offsides call. The third time was the charm, as he made it from 47 yards.

Clemson is the first school in history to win 5 consecutive conference championship games. Oklahoma won its 5th straight Big 12 conference title but has not won 5 straight title games like the Tigers. Clemson is now tied with West Virginia for 14th on the all-time win list, and the Tigers have won 8 straight games by 30 points or more, which is the longest streak since at least WWI! The nation-long 28-game win streak is the longest since FSU won 29 straight from 2012-2014, and the Tigers are 71-4 in their last 75 games, losing twice to Alabama in that stretch. 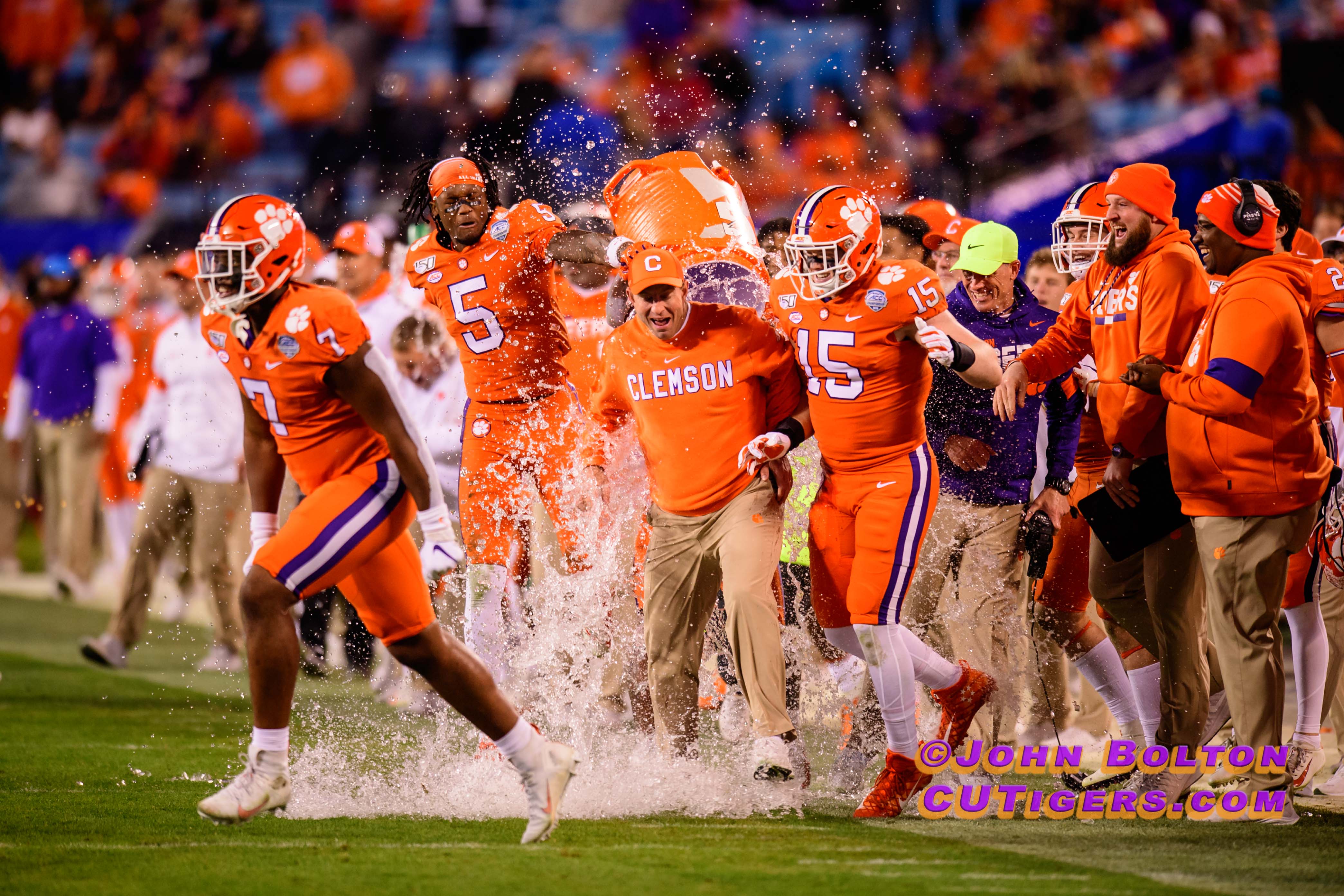 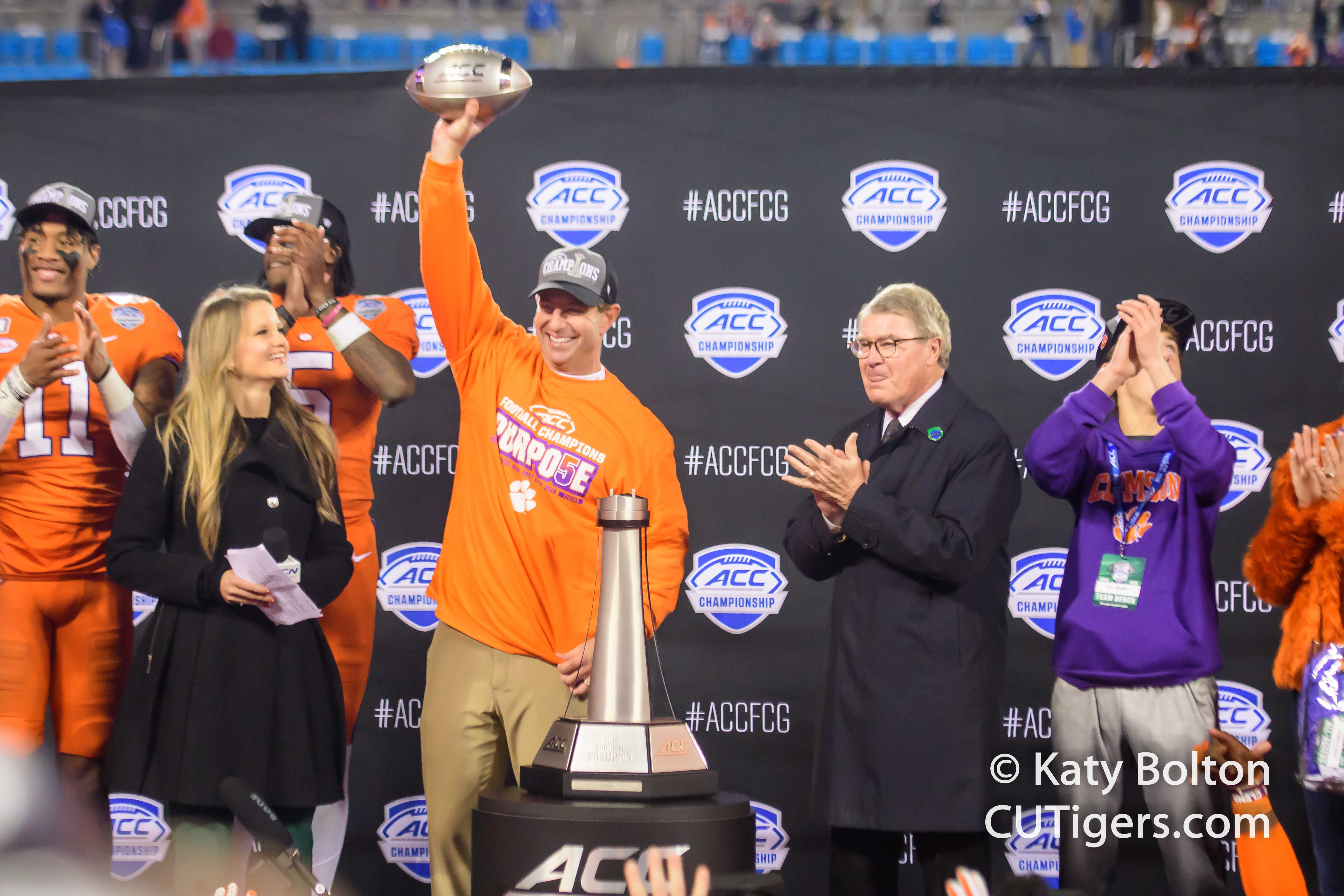 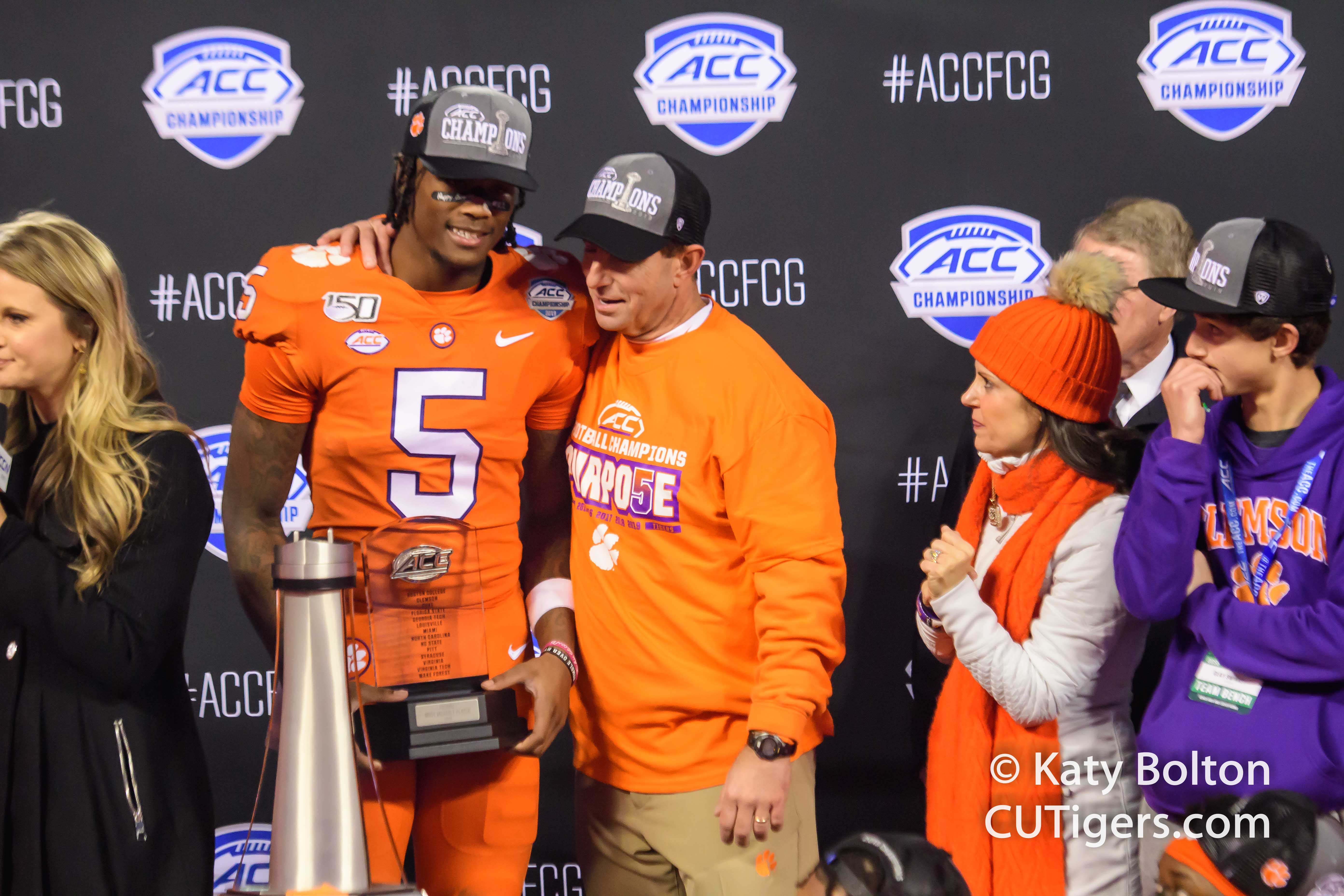 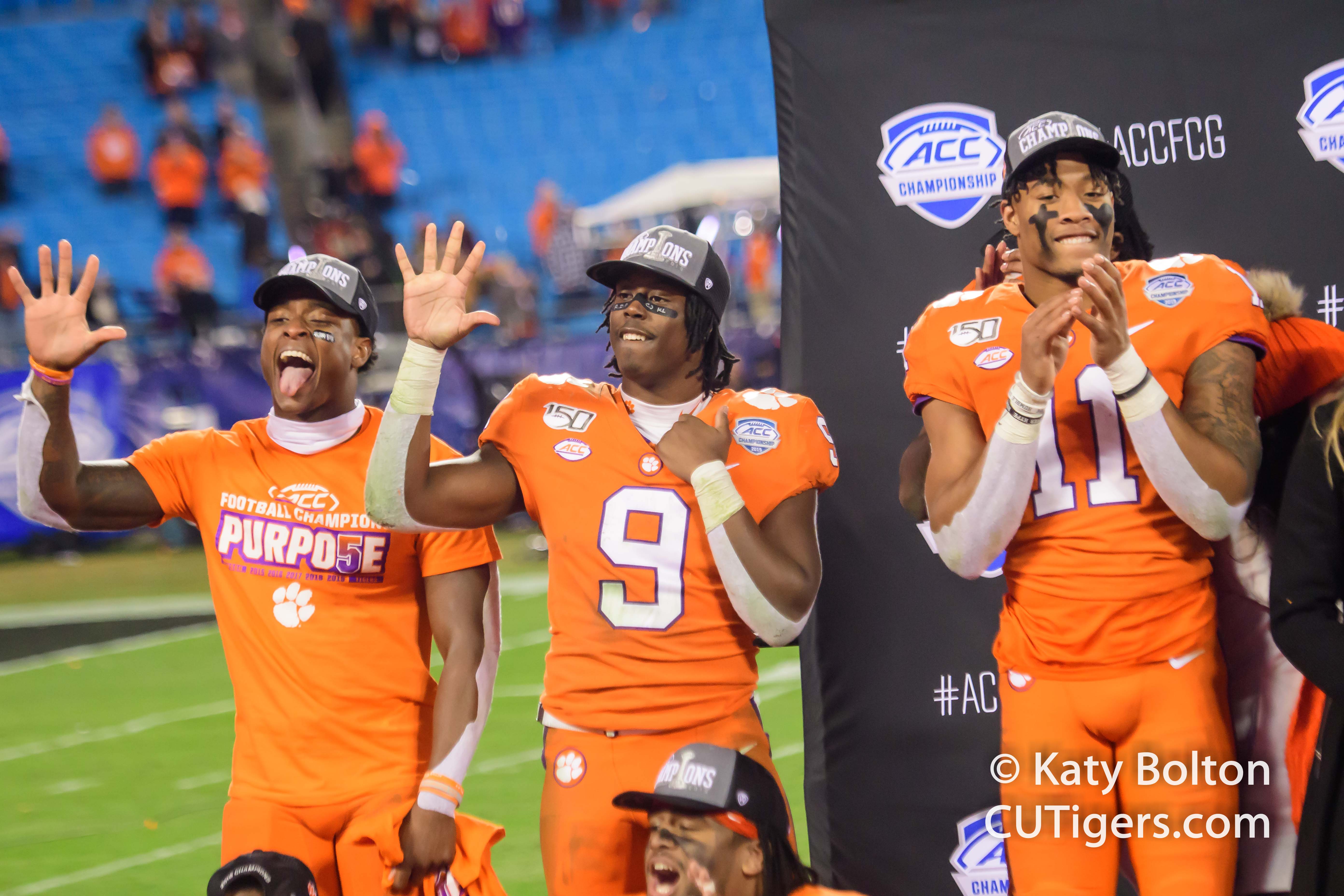 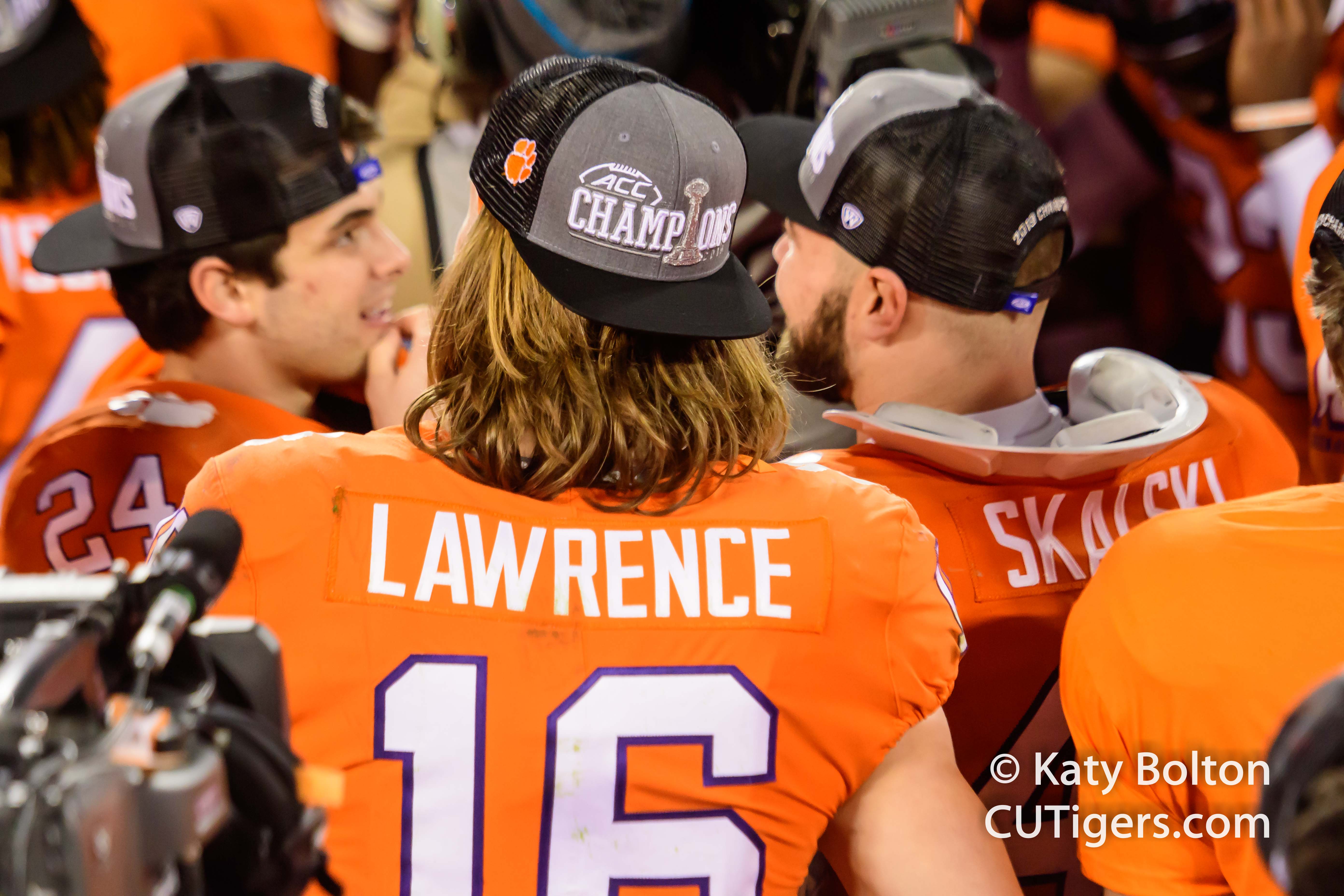 On Sunday, Clemson will join Alabama as the only schools to make 5 College Football Playoff appearances, and both have made 5 consecutive trips. I expect LSU to jump Ohio State for No.1, unfortunately, which means the Tigers will once again have to travel to the desert to play Ohio State instead of nearby Atlanta, just like 2016 when the Tigers beat the Buckeyes 31-0 en route to the national title.

Be sure to check back on Sunday evening for our Fiesta Bowl Teleconference with Dabo and Ohio State Head Coach Ryan Day!