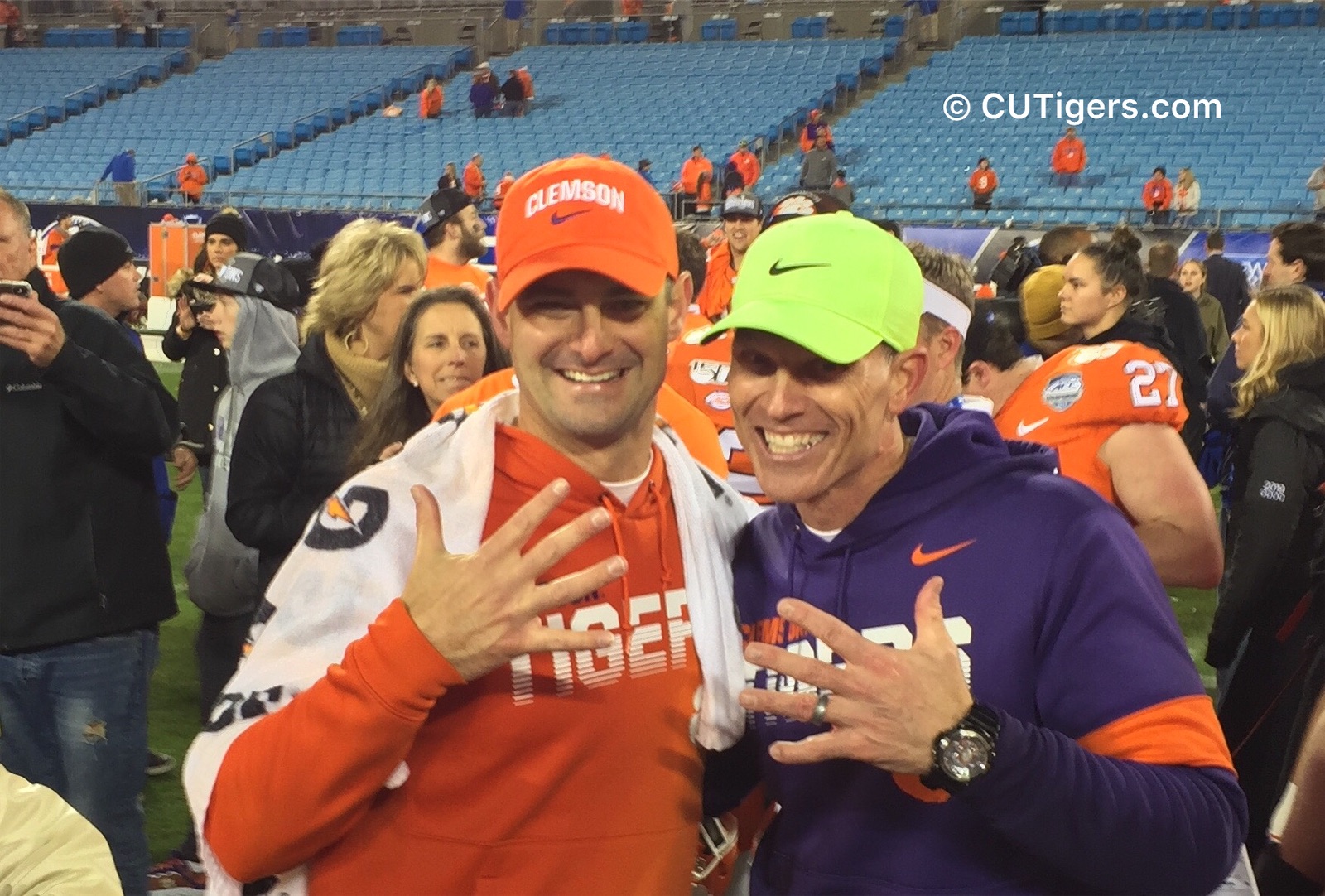 CLEMSON, SC - After monitoring the Jeff Scott situation for the last 48 hours, I can tell you it's finally official: the Co-Founder of "WRU" will leave his alma mater to become Head Coach at USF. Dabo was Jeff Scott's position coach at Clemson under Tommy Bowden, and in addition to WR Coach and Co-Offensive Coordinator, Scott was Recruiting Coordinator for several years before handing that job over to Brandon Streeter. Scott has produced more NFL wide receivers than any other during his tenure, and he has many ties to the state of Florida through his father Brad's tenure as FSU Offensive Coordinator and his time recruiting the state for Clemson, bringing in players like Sammy Watkins, Deon Cain, Ray Ray McCloud and Frank Ladson from the state of Florida. Ironically, USF has beaten both Clemson (2010) and South Carolina (2016) in bowl games during this decade.
STATEMENT FROM DABO:
"I first want to thank Jeff Scott for a wonderful 12 years. I'm happy for him and his wife, Sara, and his daughter, Savannah, and I’m so appreciative of all their family has meant to us over the last 12 years. We're going to miss them tremendously.
Operationally, Jeff will be serving as the head coach at USF for the next week before rejoining us the latter part of next week and remaining with us for the duration of our College Football Playoff run. Our team is excited that he'll have the opportunity to finish our 2019 season with us.
Jeff has been with me since day one when I became interim. He's somebody I trust immensely and he's extremely loyal. He's been patient for the right opportunity, and I think this is that right opportunity. He’s got a great AD in Michael Kelly. It's a great fit for Jeff and I know that he's well-prepared to take this next step and has all the tools he needs to be a great head coach.
It's been a real joy to watch Jeff grow and develop and work side-by-side with him. He's done an amazing job representing Clemson, representing the program, coaching our wide receivers and coordinating our offense. His leadership has been a big part of our success, and we will always appreciate his contribution to our program."
Statement from Jeff Scott:
"I have great respect for the USF football program and what has been accomplished in a very short time and can't wait to get to work building on that foundation to produce a championship program. It is difficult to leave my alma mater and the great program we have built at Clemson, but I believe we can do great things at USF. I am thankful to Coach (Dabo) Swinney and all the Clemson players and staff for the great experiences and lessons that have prepared me to lead USF football."
Statement from South Florida AD Michael Kelly:
"Jeff is a very bright, enthusiastic and driven leader for our program and we are thrilled to welcome him to USF and back to Florida, where he was born and where he has recruited so well for Clemson for many years. He is a young and extremely gifted offensive mind, a developer of high-level talent and an elite national recruiter who brings the experience of having played an integral role from the beginning in helping to build one of the most successful programs in college football."
Scott will coach Clemson through the playoff, and my hunch is that QB Coach and Recruiting Coordinator Brandon Streeter will replace Scott as Co-Offensive Coordinator. Former Clemson OC Chad Morris is still unemployed, and as I noted when he was fired last month by Arkansas, perhaps he will return to Clemson at some point down the road. More to come!
CLEMSON ACC CHAMPIONSHIP & CFP COVERAGE HERE