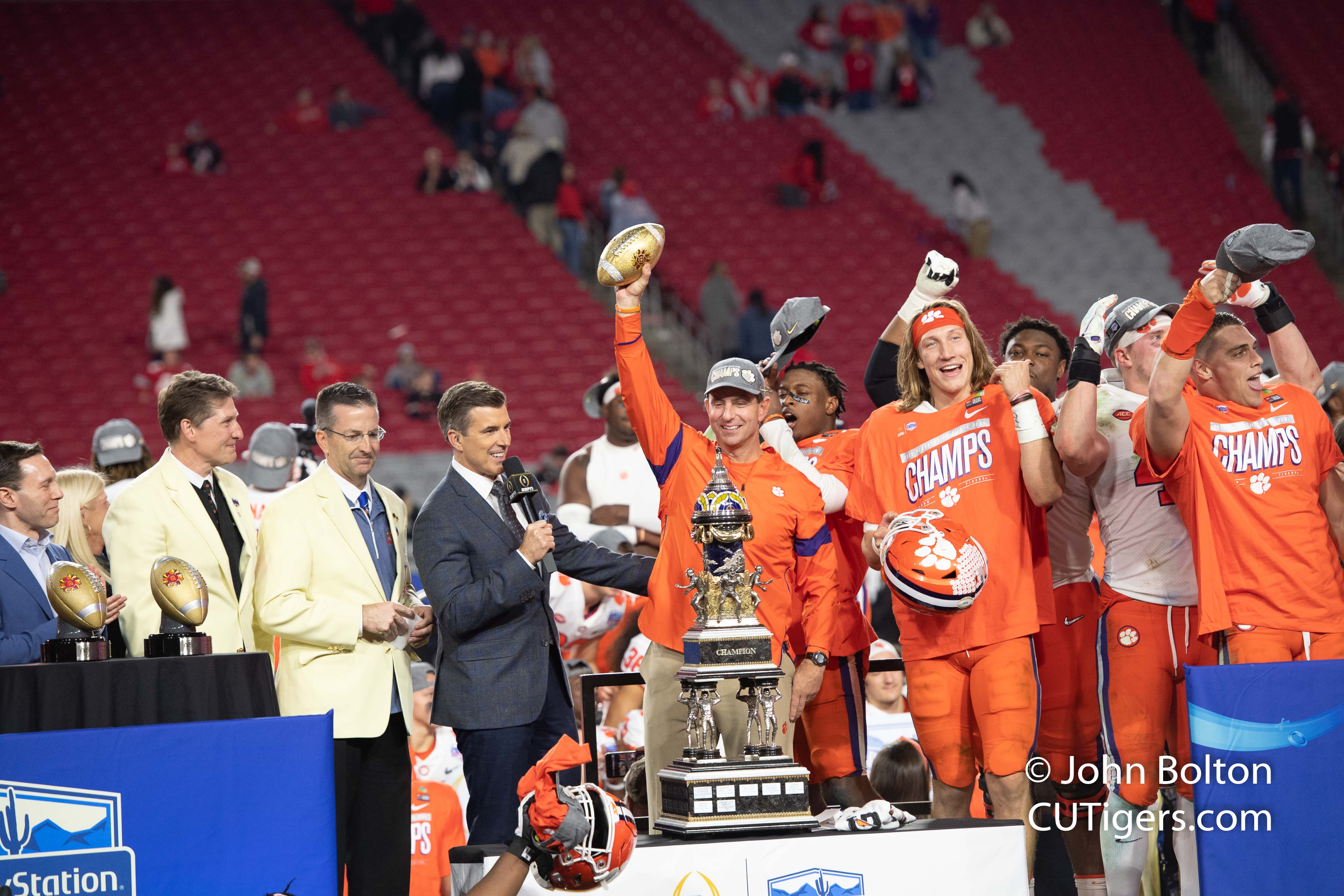 Photo by John Bolton CUTigers.com
GLENDALE, AZ - Well, that was one for the ages. I said to someone on the way down to the field at the end of the 4th quarter that it felt like Tampa in 2016, and it really was a similar feeling. When I got to the field from the press box, the Tigers had the ball with 94 yards to go, 3 minutes left and down 2 points. I felt pretty confident that Trevor would at least get them in field goal range for the win, but instead, they went right down the field and scored on Etienne's 3rd touchdown of the game! Higgins made his best play of the game with a 2-point conversion catch after missing most of the first half with a head injury. I said to someone that they might have scored with too much time left, nearly 2 minutes, but I still felt confident that the defense would somehow, some way, keep Ohio State out of the end zone. Just like they did against UNC and so many other times before. Sure enough, Nolan Turner comes up with an INT in the end zone to seal the game! What a great moment of redemption for the guy after having probably the worst game in his career! He missed a big open-field tackle on 3rd down and also was burnt on the 4th and one touchdown pass. His dad was in Heaven smiling at the end, though! You can't spell NOLAN without NOLA, and the Tigers will be heading there in a couple weeks for a shot at history and their 3rd national title in 4 years! 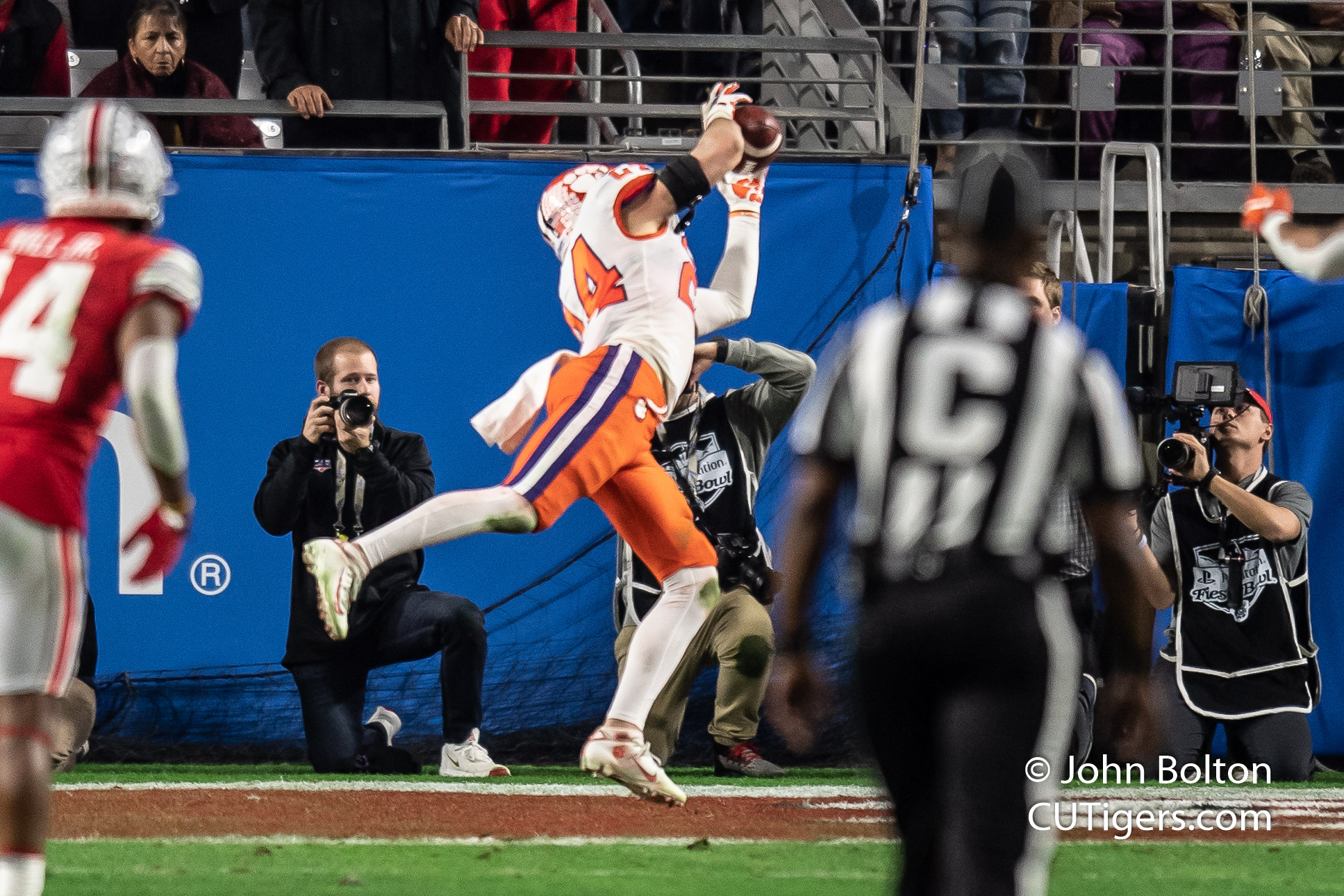 The Tigers got off to a rocky start--very similar to their only close game of the season in Chapel Hill--but this one felt even worse. Tee Higgins made a big catch on the second play of the game, but a few plays later he left the game after losing his helmet and taking a blow to the head. Higgins was probably the hottest receiver in the nation coming into the game, posting 8 touchdowns in the last 3 games, and his absence was a big part of the Tigers' struggles through the first 20 minutes of the game. Higgins would return in the second half, but you could tell he wasn't himself, and he dropped a couple balls that he would normally catch. However, with a 16-0 score--their largest deficit of the season--Trevor Lawrence put the team on his back. After taking a blow to the head and shoulder that resulted in an enormous targeting call, instead of a punt on 4th down, the Tigers were able to score their first touchdown thanks to an incredible touchdown run by Etienne after a toss sweep, again on 3rd down. Etienne would not be denied, and it really swung momentum in the stadium that had completely belonged to the lopsided Buckeye crowd previously. 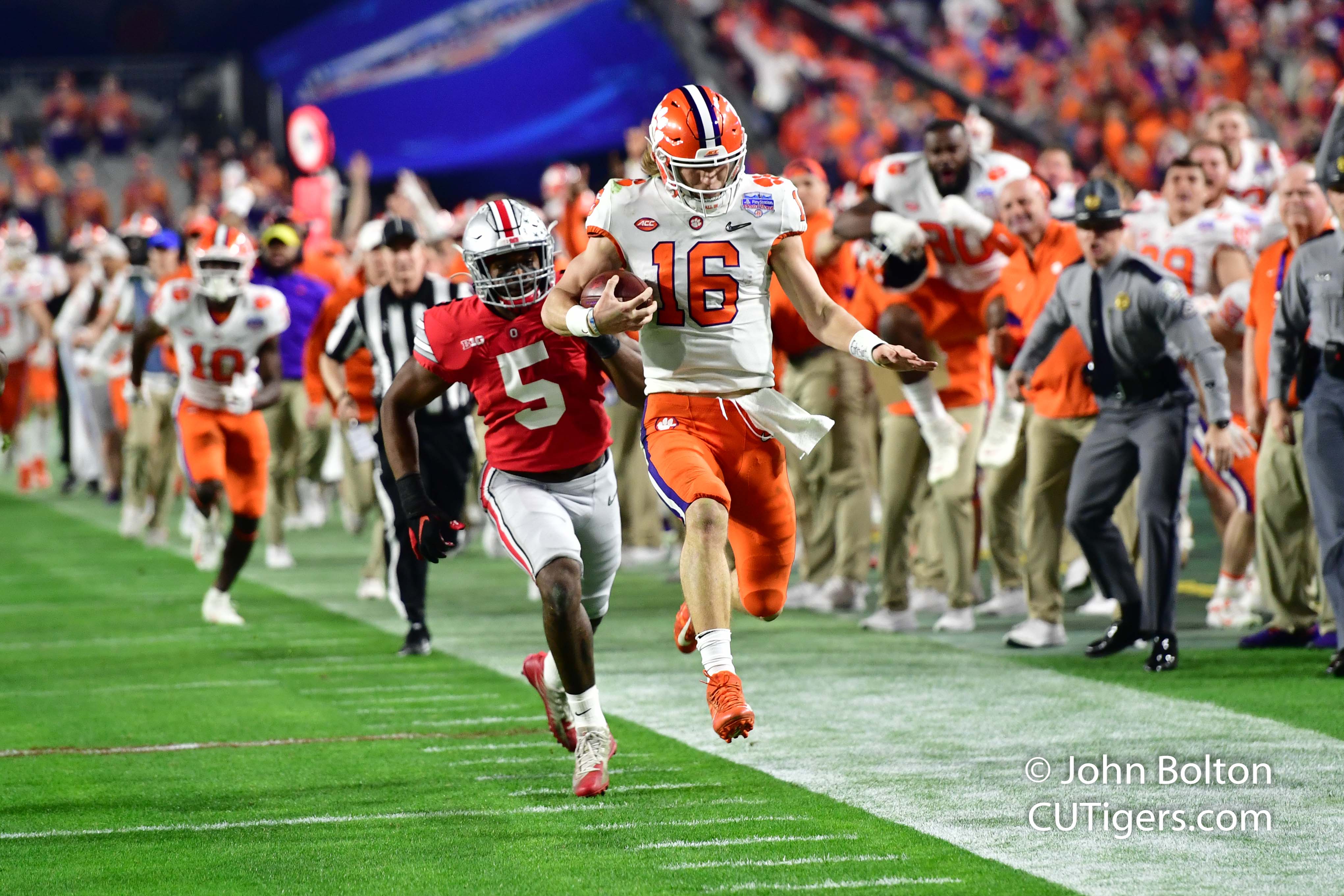 Trevor would add to that momentum in a big way on the very next possession after a 3-and-out by the defense. He juked two Ohio State defenders and outran the rest on his way to a 67-yard touchdown run, the longest run of his career. That made the score 16-14, and momentum was firmly with the Tigers and the sea of orange in the stands.
As I expected, Brent Venables and the defense were tested like they haven't been all season. Dobbins broke a couple of huge runs, and Fields played like a Heisman Finalist despite his knee injury. Though they gave up a lot of yards, the defense was outstanding in the red zone. It was very similar to the National Championship against Alabama last season in terms of getting big stops in the red zone. And don't overlook that touchdown-saving tackle by Tanner Muse on the long run by Dobbins! That saved the Tigers 4 points, so if not for that, the Buckeyes would have had an easy field goal attempt to win the game. The old safety came out in All-American Isaiah Simmons. The Butkus Award winner showed why he's the most versatile player in the nation on a fantastic interception in the second half, coming out of nowhere for the pick. Heisman Finalist Justin Fields threw just one interception all season, but the Tigers came up with two of them on Saturday night, giving them 19 on the season. They were No.4 nationally in interceptions coming into the game and No.5 in turnover margin at +14, now +16. 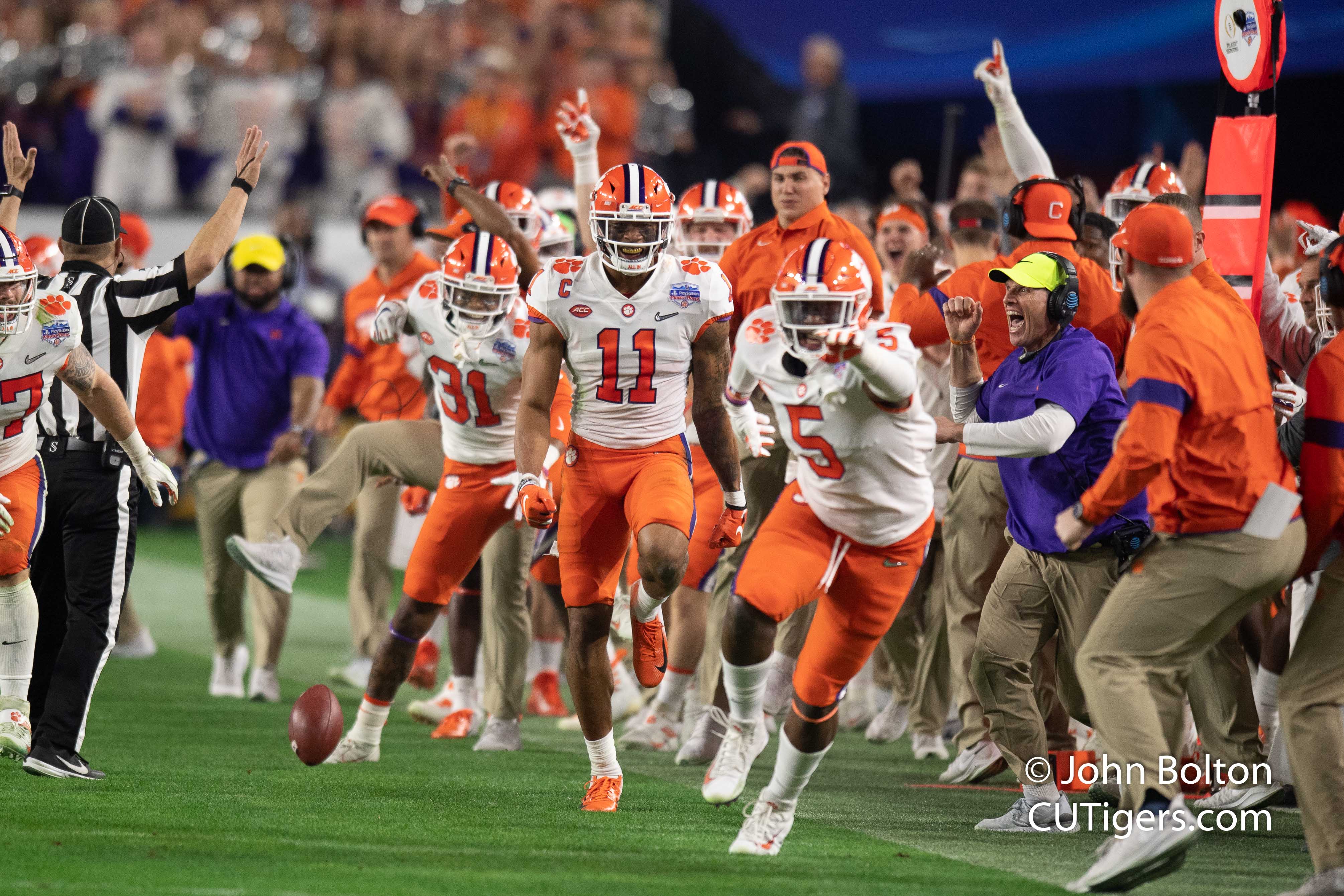 Sir Lawrence rushed for over 100 yards for the first time in his career and demonstrated that he has moves in the open field combined with breakaway speed. I've been talking about that all season, but the rest of the nation knows it now. Ironically, Etienne made his bones in the passing games with over 100 yards receiving and scored 3 of the Tigers' 4 touchdowns. The Tigers surely missed Higgins offensively, and Ross also hurt his shoulder at one point, but they found a way to win like they invariably do. They fittingly scored 29 points in their 29th straight win, which is the longest win streak since FSU won 30 with Jameis Winston from 2013-14. 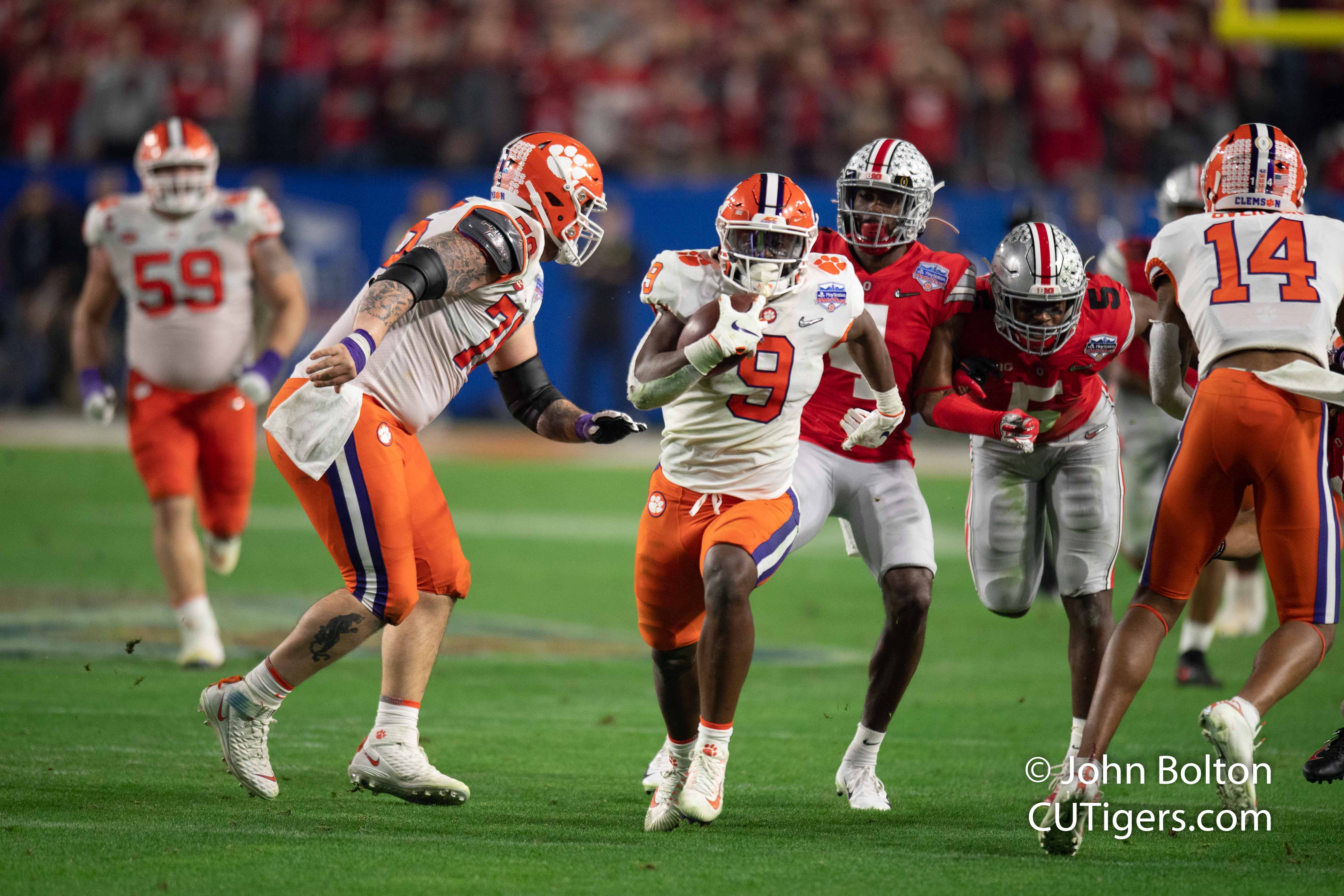 The Tigers will go for history now with a chance for back-to-back 15-0 seasons after no team had done it since the 1800's. They have a chance to join Notre Dame and Alabama as the only programs to win 3 national titles in 4 years. Of course, the road will be as difficult as possible for them, just like last year, as they will have to play a red-hot 14-0 LSU team in a virtual road game in New Orleans. The Tigers have now won 43 straight Saturday games and are 22-0 against undefeated teams since 2015. They are a remarkable 100-2 when entering the 4th quarter with a lead. What a way to finish the greatest decade in 124 years of Clemson Football! 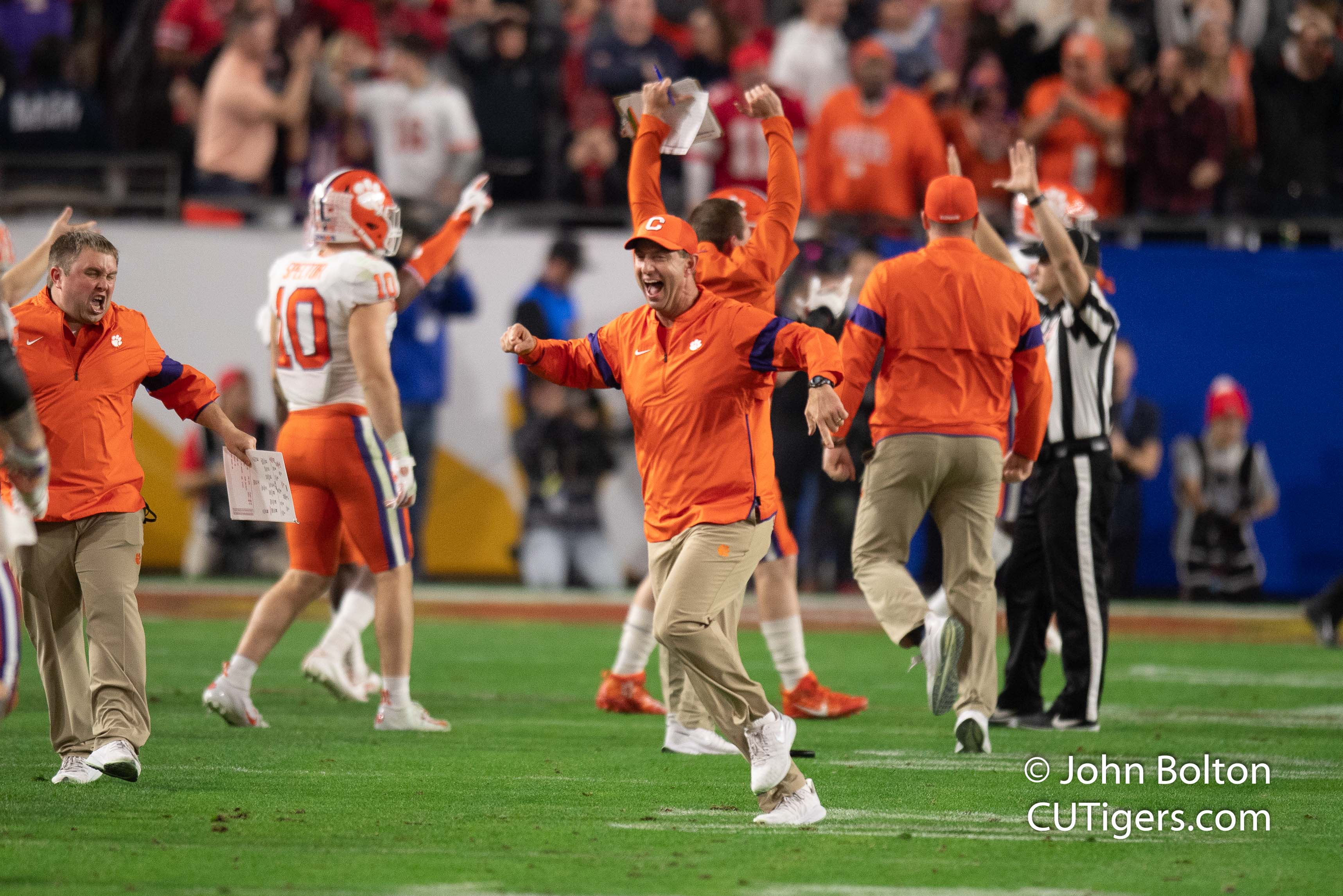