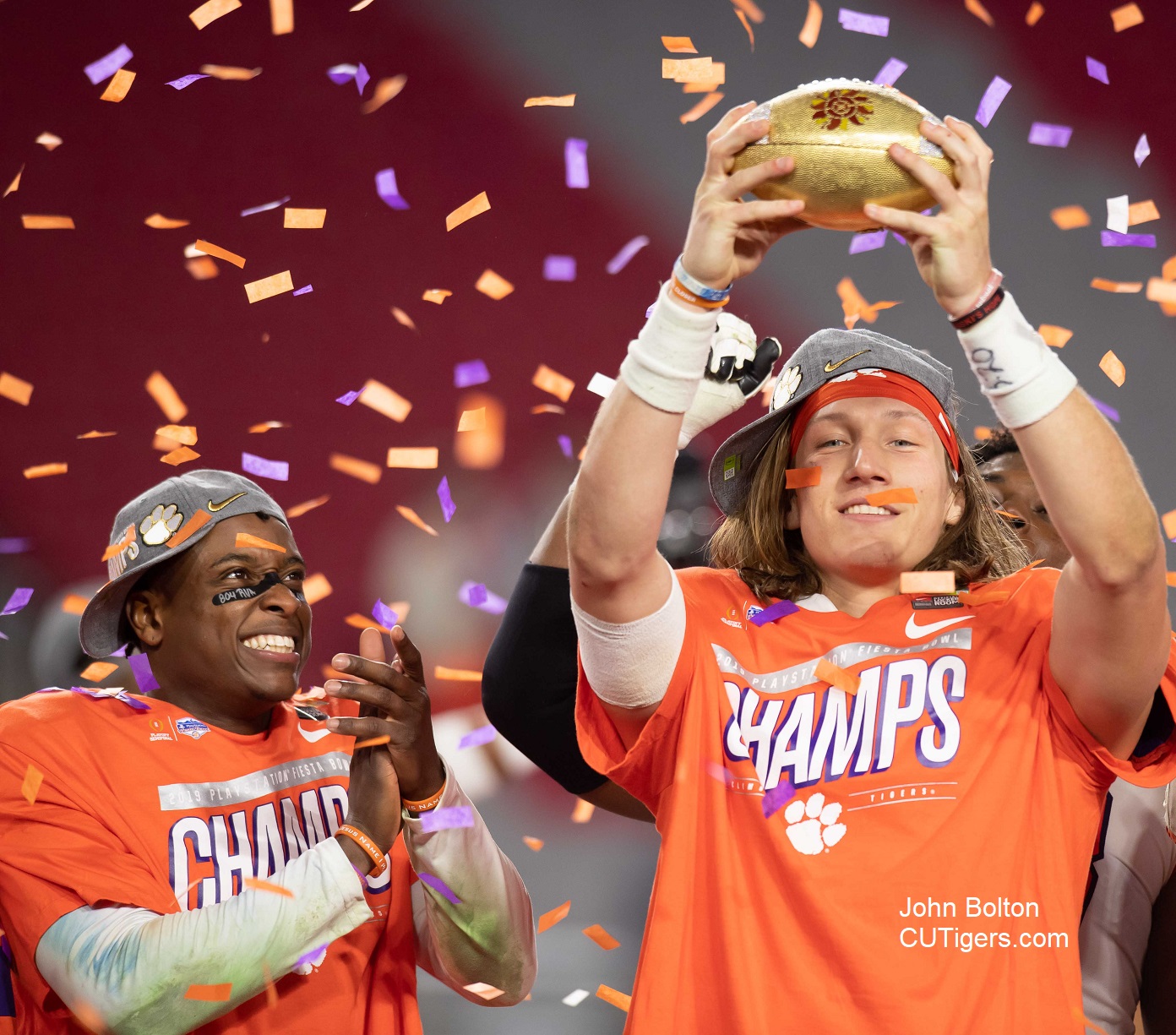 
FROM UNSUNG RECRUIT TO NATIONAL CHAMPION: K'VON WALLACE WILL LEAVE CLEMSON A WINNER

People mainly look at the statistics. They look at the plays athletes make. They look at the points that players put up, or the points that they prevent from happening. People glance at the scores to little games and study the scores to big ones. They let these numbers, plays, points and final scores define a player. The people on the outside do not care what type of person a player is when the stadium lights aren’t on as long as they are playing well. Clemson’s football program is different, and anyone who gets to experience the culture that Dabo Swinney has created will see that. One of Clemson’s biggest philosophies of its football program is to serve its players’ hearts and not their talent, but everyone within the Clemson football program has seen that K’Von Wallace has even more heart than talent, which says a lot because he is extremely talented. Before his final game in Death Valley, senior K’Von Wallace reminisced on his time in a Tiger uniform: “This is special. Just being at Death Valley and winning…A lot of great things happened on that field – it’s something special.” K’Von also said that the family he has built at Clemson is what he will walk away the most grateful for. “The brotherhood will last a lifetime,” he said. “The people in this program have helped me become a man, and they know I love them.” As much as K’Von likes to emphasize the mark that Clemson and the people in it have left on him while serving his heart and his talent, he has more than left his mark on Clemson while the stadium lights were on and while they were off.

Before he got to Clemson, K’Von was a standout in high school even though he did not start until his senior year. Many of the plays he made in high school were on the opposite side of the ball than they’ve been at Clemson, though. K’Von was named first-team all-state both as a defensive back and a wide receiver. He helped lead Highland Springs High School to its first state championship since 1961 with five catches and two touchdowns on offense and an interception on defense. During this same season, he had 718 receiving yards as well as 376 rushing yards – some of which even came from K’Von playing quarterback. During his junior year, K’Von recorded 17 catches for 450 yards with 4 touchdowns and 166 yards rushing on offense and one interception with 27 tackles on defense.

After his senior season, K’Von posted an updated Hudl highlight video on Twitter. After his highlights were shared and retweeted all over the popular social media app, his offers started piling up. K’Von received offers from University of Pittsburgh, Texas State, Coastal Carolina, Arizona, Maryland, Clemson, Ohio State, and Michigan State all within 19 days of his tweet. Leading up to National Signing Day, some of these coaches visited him for a whole entire month. Although K’Von was committed to Cincinnati, his dream school was Ohio State. And although K’Von’s dream school was Ohio State, in February of 2016, K’Von signed to play football at Clemson University. He enrolled at the school in June of 2016.

“I can’t explain it, but this is it. It just feels right.” This is how K’Von told his mother that he knew he was at the right place when visiting Clemson. He got to the school feeling lonely knowing nobody, but K’Von still knew he was where he needed to be. K’Von had no friends at Clemson prior to his enrollment at the school. Since K’Von did not have a vehicle when he got to Clemson, he had to reach out and ask for rides from his teammates. This allowed him to become close friends with his defensive lineman: Christian Wilkins, Austin Bryant, Clelin Ferrell, Dexter Lawrence and Albert Huggins. Although he had to get used to stepping out of his comfort zone on campus, he quickly showed his comfort on the football field.

Since he has been at Clemson, K’Von has put on a show as a Tiger. Although he was not a big-time recruit, K’Von quickly let people know who he was. As a true freshman, he played in all 15 games that led up to the 2016 National Championship. As a sophomore, he played all 15 and started 6 games that led up to the 2017  Sugar Bowl. As a junior, he played and started all 15 games that led up to the 2018 National Championship. At the end of the regular 2019 season, K’Von had 159 tackles in his career as a Tiger, including 20 pass break-ups, 5 interceptions that included one pick-6, 1 sack, and 2 forced fumbles. Just in the 526 snaps and all 13 games that he started in, K’Von had 62 tackles, 8 pass break-ups, 1 sack, and 2 interceptions (one of these was his pick-6). He was awarded third-team All-ACC, as co-defensive player of the week and ACC Defensive Back of the Week against Texas A&M, and defensive player of the game against South Carolina.

K’Von Wallace came to Clemson with a chip on his shoulder. He is from Richmond, Virginia and attended Highland Springs High School. He was ranked the number 4 player in Richmond, while his high school’s team was ranked 43 in the nation and number 1 in the state of Virginia. Although the college coaches attended his senior-season games, K’Von was never offered by a Virginia school. In the ACC Championship, K’Von “couldn’t wait” to play the University of Virginia. It was the last Virginia school that K’Von was looking forward to playing after already beating Virginia Tech during his sophomore year. “What does playing Virginia mean to you?” was a question aimed at K’Von when Clemson found out that they would be facing Virginia for the ACC Championship. “You know my story. You know how I feel about Virginia teams…I’m fixing to put my best 60 minutes on display. I’m fixing to lead and be the team player that my teammates want me to be. ” K’Von did exactly that. He went from three tackles in 25 snaps against Virginia Tech during the 2017 season, to nine tackles and two pass break-ups against Virginia to aid in the win of Clemson’s fifth ACC Championship in a row.

In an interview during regular season, K’Von said, “I play my best when the lights are shining.” Four ACC Championships. Five Bowl-Game wins with 6 tackles, two pass breakups and an 11-yard sack in the most recent one. Three National Championship appearances with two National Championship titles. In this same interview, he said, “It is what it is. I am where I’m supposed to be.” These words are set in concrete as K’Von plays for his third National Championship Title since he has been at Clemson, which is also the last game he will every play as a Clemson Tiger. Knowing he will be playing his last game in a Clemson uniform, he uses his emotion to channel who he is as a person and who he is as a player. “It’s a way to humble you - to know that someday it’s going to end for you.” It brings you back to the realization that it took a lot of hard work to get here…The more I go through this process, the more humble I become.”

“I got a lot of kids back home looking up to me for some hope and I play for them. I got a lot of family members that aren’t here – they’re in Heaven or jail. Everything I do – I do for them.” K’Von never thinks about himself. When he steps on the field, everything that he does is in honor or in memory of someone else. He wants to play in the NFL and has every ounce of talent and potential in his body to do so. Dabo Swinney said, “He brings a lot. And he’s smart…And he’s a winner. All he’s done is win since he’s been here. So he’s going to bring that mind-set to wherever he goes.” But even when thinking about making it as big as the NFL, K’Von only hopes to make an impact on other people’s lives around him. “I truly believe that a long career in the NFL would not just benefit my life, but my family’s life and the youth’s life in my area and bring hope to my community. All kids need is hope. They need faith, they need belief. Any time you can give that kid that one inch of belief, it changes their life.” Whether he realizes it or not, the impact that K’Von thinks he’s going to make on other people’s lives in the future – has already started. While the stadium lights were on and while the stadium lights were off.