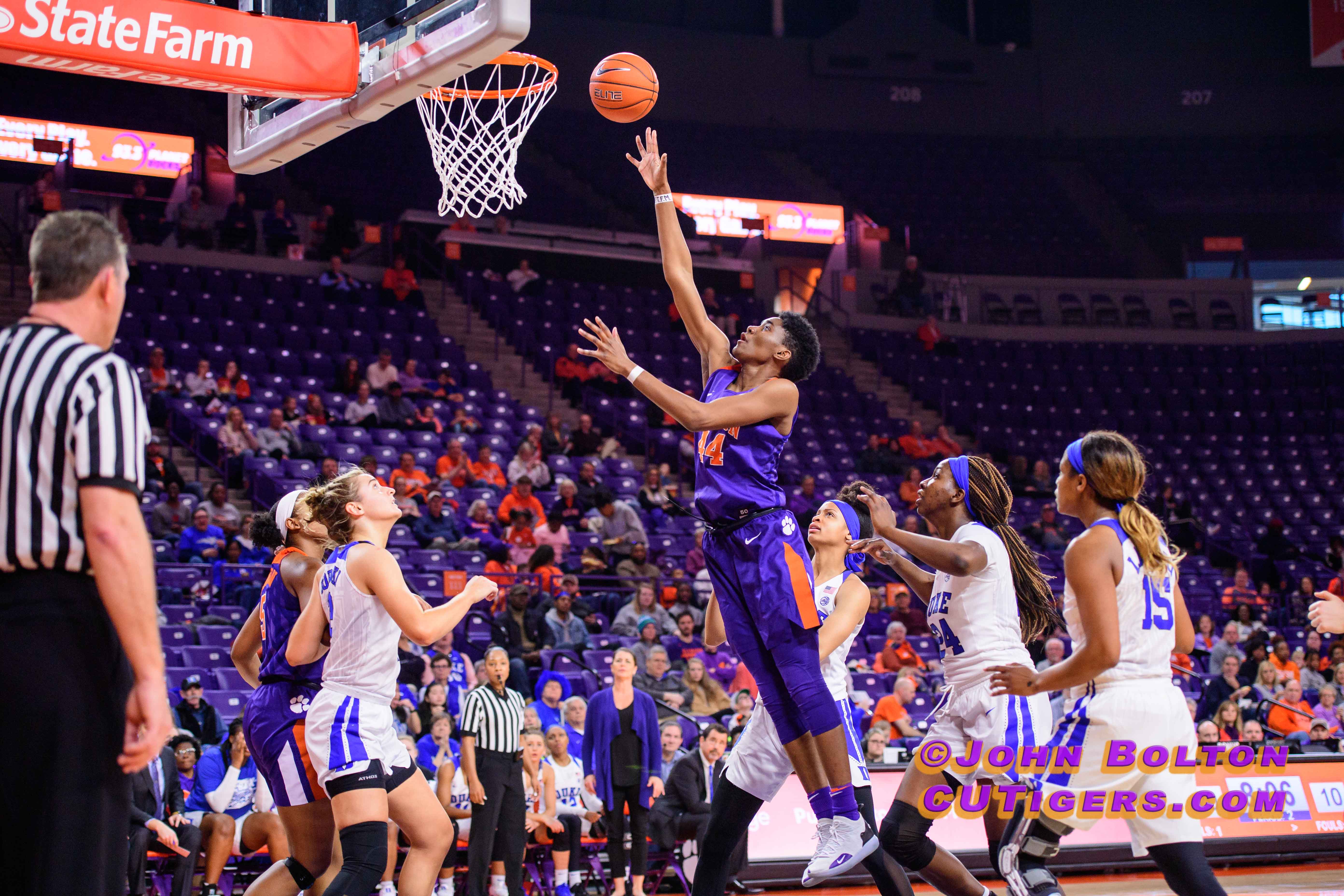 CLEMSON, SC - It's been an auspicious 2020 for Clemson Basketball, as just days after the men knocked off No.3 Duke to cap a 3-game win streak over Tobacco Road, the women's team followed suit and beat the Blue Devils for the first time in 20 years, 62-58. Duke's women's team is not having the Final Four season they are accustomed to, but that doesn't minimize the importance of the win for Amanda Butler in her second season as Head Coach at Clemson. "I'm happy for our kids to have that sense of pride," Butler said. "That how hard they're working us is getting us the results that we want."
Kendall Spray led the way with a double-double, 16 points and 12 rebounds. Amari Robinson scored 16 as well and added 9 boards. Kobi Thornton scored 14, and the trio combined for 46 of the Tigers' 62 points.
AMANDA BUTLER:
"We definitely made the plays we needed to win. We had a tremendous start to the game. We couldn't have played any better in the first half. There was a whole lot of determination from our team today."
On the keys to the game:
"Duke was really locked in on Kendall and tried to put pressure on her. We played a little bit outside and couldn't really trust our sets to get shots. So we had to do more creating. We just sustained our energy throughout and prevailed. It wasn't pretty, but we don't care. We just want to be us."
On Amari Robinson's performance:
"She has a really high basketball IQ and is always trying to make a play for her team. She came up with some big shots today. Those free throws at the end were huge."
On Kendall Spray's performance:
"She went in there and battled for us today. It was a huge part of creating that lead. She took rebounding to heart."
Brad Brownell's 3-game win streak came to an end with a hard-fought 60-54 loss at NC State. The Tigers had beaten the Wolfpack 81-70 just a couple weeks ago in Littlejohn to start a historic win streak over State, UNC and No.3 Duke which moved Brownell past Cliff Ellis for most wins in Clemson history and ended the Tigers' infamous losing streak in Chapel Hill. The Tigers shot 26-31 from the free throw line in the win over State, but free throws would be their undoing in Raleigh, as they were just 9-23 at the stripe. The Tigers showed a lot of heart to get within 3 points after falling behind by 18 in the second half, but in the end, free throws were the difference in the game. They look to bounce back on Tuesday against Wake Forest in Littlejohn.
MORE CLEMSON BASKETBALL AND FOOTBALL COVERAGE HERE