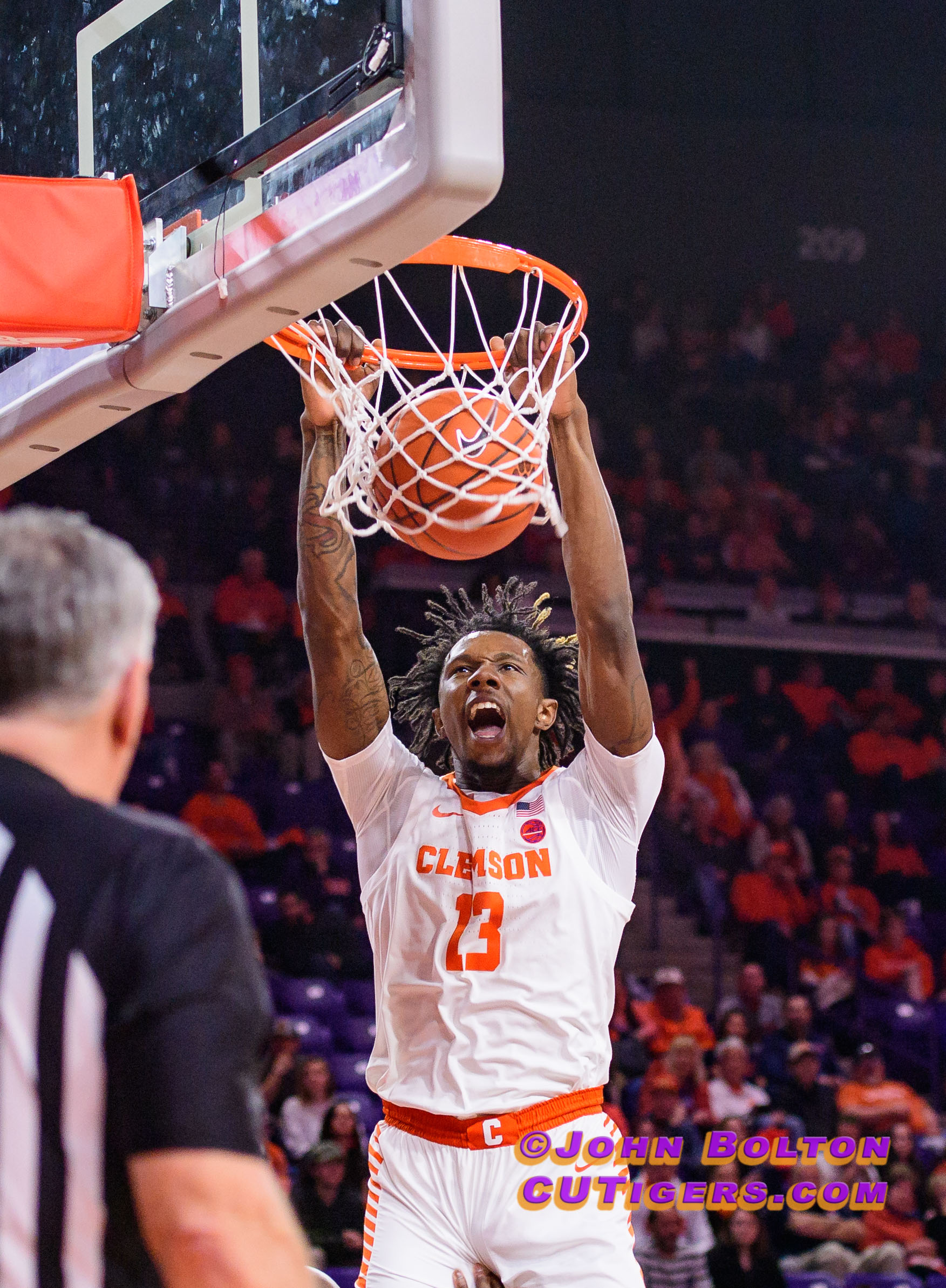 The Tigers are halfway through the ACC regular season schedule, and they are a very respectable 5-5 after going 5-2 in the month of January. It was a bad year for the ACC to go to a new 20-game schedule that required early ACC games, including the season opener against Virginia Tech, for a Clemson team that was dealing with injuries and replacing 4 of 5 starters from last year’s team. After an 0-3 start, however, Clyde Trapp has returned from his ACL surgery, and the Tigers are starting to find some chemistry and confidence. They have beaten all four Tobacco Road teams in the month of January as well as Syracuse, giving them wins over the three winningest coaches of all time in the same month (assuming Roy Williams passes Bob Knight next season).

Now the Tigers turn the page to February and the second half of the ACC slate. It starts at 8:00 on Saturday night with a road game at Wake Forest, a team the Tigers just beat 71-68 less than two weeks ago. Hunter Tyson got his second career start and carried the Tigers with a career-high 21 points in the come-from-behind win. Simms and Mack combined for just 14 points in that game. The Tigers have won 8 straight over the Demon Deacons.

It’s been a tough season for Danny Manning and the Deacs at 2-8 in ACC play. Don’t let the record fool you, though, because they beat No.23 Xavier earlier this season and took UVA to overtime just a week ago. And again, the first matchup in Littlejohn less than two weeks ago was a dog fight in which the Tigers trailed for most of the game. Wake lost its last game at Notre Dame 90-80 on Wednesday night. Point guard Brandon Childress, son of Wake legend Randolph Childress, scored 16 points in the first half and 24 in the game. He is outstanding at attacking the basket off the dribble and can also shoot the three. It was the other guard, however—Adrien White—who had a big game against the Tigers in Littlejohn, scoring 22 points to lead the team. He only averages 9.5 points per game this season.

Wake also has a dominant presence in the paint and a future NBA star in 7-footer Olivier Sarr. He was beset by early foul trouble at Notre Dame but still finished with 18 points, and he averages almost 10 rebounds per game. Sarr is very polished on the low post and also extremely versatile. Don’t be surprised to see him make a 3-pointer or two.

We could see the return of 6’5 junior shooting guard Chaundee Brown on Saturday night. He’s been out with an injury for almost a month but was dressed to play on Wednesday night in South Bend. He could be the x-factor for the Deacs because he was averaging 13.3 points and 6.5 rebounds per game before the injury. In fact, Wake had won 3 straight games, including the upset over No.23 Xavier, before he left the lineup.

Finally, you may recognize a name coming off the Wake bench on Saturday night. Sharone Wright’s son, Sharone, Jr., plays guard for the Deacs sparingly. His father, of course, was a big man for the Tigers from 1990 to 1994, and he was drafted 6th overall by the 76ers.

We just got word that forward Jonathan Baehre re-tore the ACL that he had rehabbed since his surgery last summer. He had played very little this season, but now the Tigers will have to go the rest of the season with a very thin front court and smaller lineup. They've been ridiculously unlucky with injuries this year!

The Tigers are coming off a thrilling 71-70 win over Syracuse thanks to Clyde Trapp’s layup with 2 seconds left. He scored a career-high 17 points with 9 rebounds, and Tevin Mack was sensational, scoring a career-high 32 points with 10 boards. Amazingly, Aamir Simms scored just 2 points, and his lone basket didn’t come until the final minute of the game. On one hand, it’s impressive that the Tigers are able to beat a good team without Simms contributing to the scoring, but I’m sure Brad Brownell would like to see him at least in double figures on Saturday night. Granted, Simms contributed to the Syracuse win in many ways other than his 2 points, and it was a tough matchup for him because of  Cuse’s patented 2-3 zone, but if the Tigers are going to make a run at the NCAA Tournament, they are going to need Simms to be a consistent scorer along with Mack.

It will be interesting to see if Brownell gives Hunter Tyson the start again on Saturday night—perhaps in place of Curan Scott, who did not have a very good game against Syracuse. Again, Tyson scored a career-high 21 points in the first meeting with Wake in just his second career start and really carried the Tigers to the win. It will also be interesting to see how much, if at all, Chase Hunter and Alex Hemenway play. Hunter did not play at all against Syracuse and Hemenway played 4 minutes. They both played for the first time in over a month at Louisville last week and each scored 8 points in the second half.

A big key to the game for the Tigers will be their free throw shooting. They’ve been wildly inconsistent all season but were thankfully 10-12 in the Syracuse win on Tuesday. Let’s hope that trend continues because they were dreadful at NC State a couple weeks ago, going 9-23, and it cost them the game in the 6-point loss. Even in the win over Duke, they shot 11-22 at the line. Conversely, they were 26-31 in their 81-70 home win over NC State. It’s been a Jekyll and Hyde routine, and I doubt they will beat Wake on the road if they shoot less than 60% at the free throw line.

The Tigers need this road win to keep the momentum going into another tough road game at UVA, which is beatable this season but is 6-4 in conference thanks to the aforementioned overtime win over Wake and a come-from-behind upset over FSU last week. They could easily be 4-6. The Tigers are currently tied for 6th in the ACC standings despite being picked 11th preseason by the media. If the Tigers can get past Wake, they’ll have a very good shot at beating UVA and could find themselves as high as 4th in the standings!