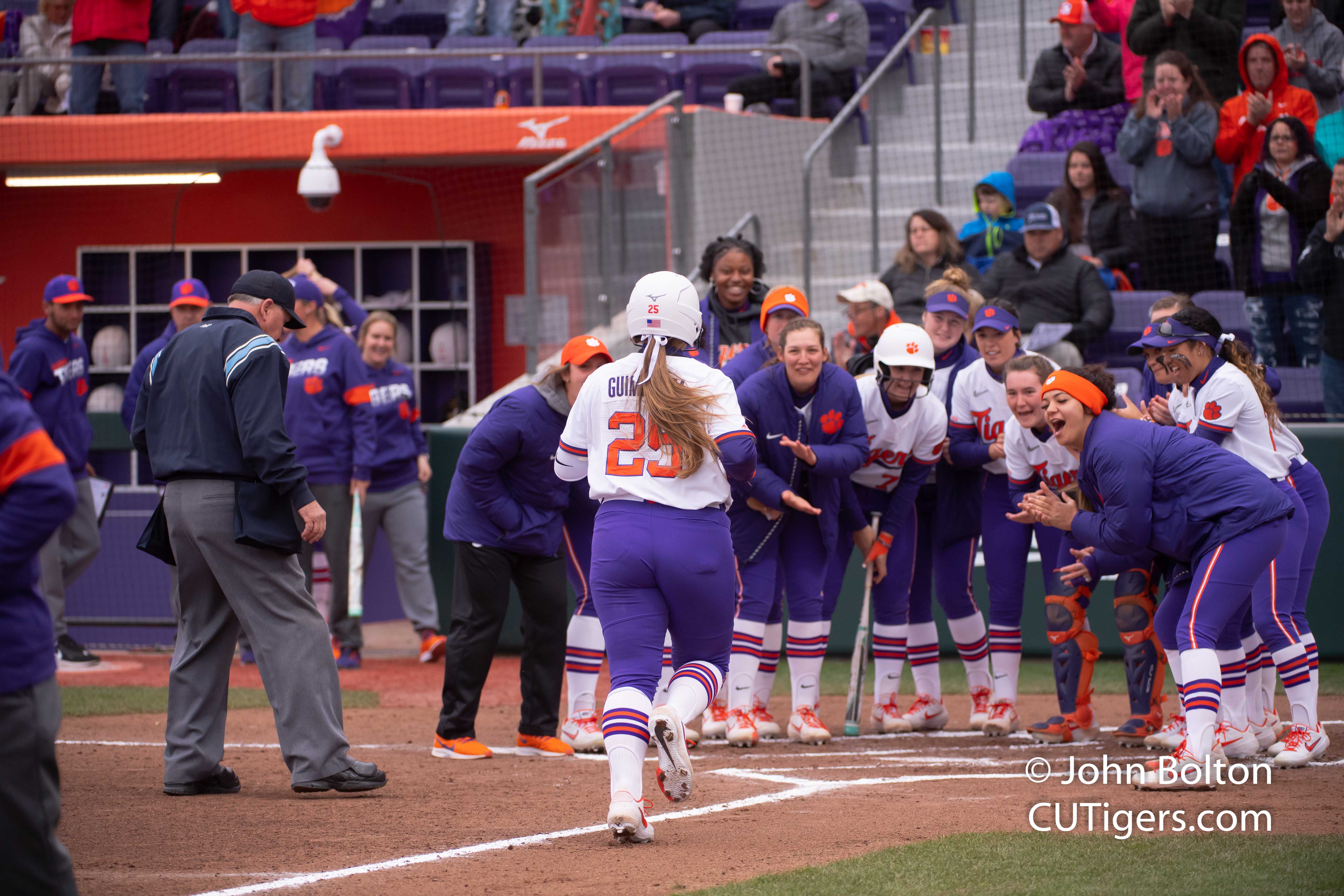 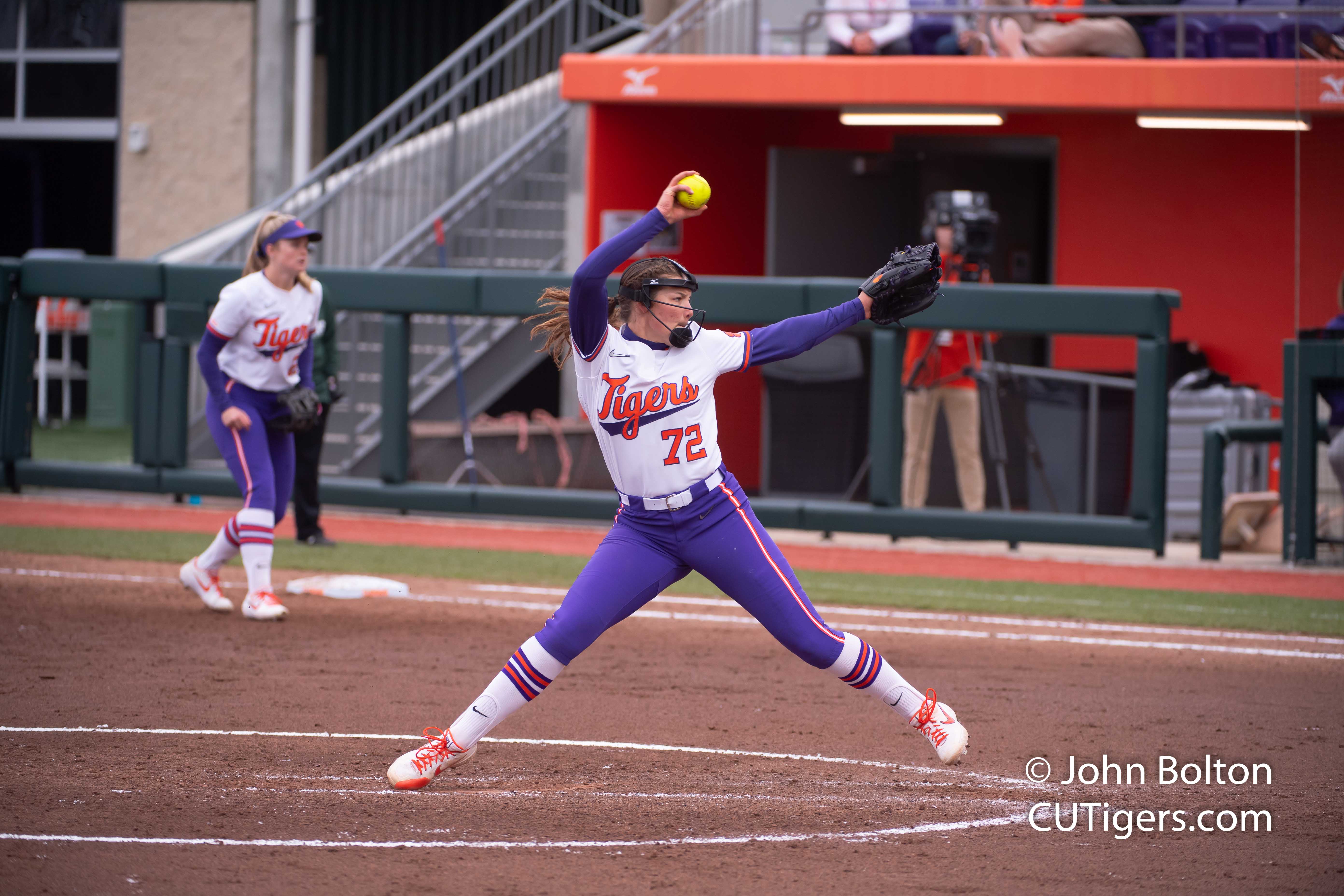 CLEMSON, SC - After the Tigers jumped on top of Michigan State early 4-0, Sparty rallied to make it 4-3 in the 3rd inning. After starting pitcher Valerie Cagle gave up a single and a walk to start the 5th, Head Coach John Rittman turned to his ace Logan Caymol to save it for the Tigers, even though she pitched 10 innings over two games on Saturday. Caymol pitched 3 scoreless innings in the 21-2 win over Maryland and then went a complete 7 innings in the 2-1 win over Michigan State. After striking out her first batter, it appeared as though her arm might have been spent because she hit the next batter on a full count to load the bases and then hit the next on the very next pitch to force in the game-tying run. However, Caymol bounced back with two consecutive strike outs to end the threat and keep the score tied! Perhaps she just wanted to collect another win rather than a save.
The Tigers immediately went back to work offensively and rallied for 4 more runs in the top of the 6th to make it 8-4. The big break came with an error at 1st on a grounder by Bonamy. That scored 2 runs, and then Marissa Guimbarda doubled in 2 more runs. Errors were really the story of the game for both sides. The two teams had 4 errors apiece, and they resulted in several runs for both sides. Caymol closed the book on Sparty, finishing with 6 K's in her 3 innings of work. 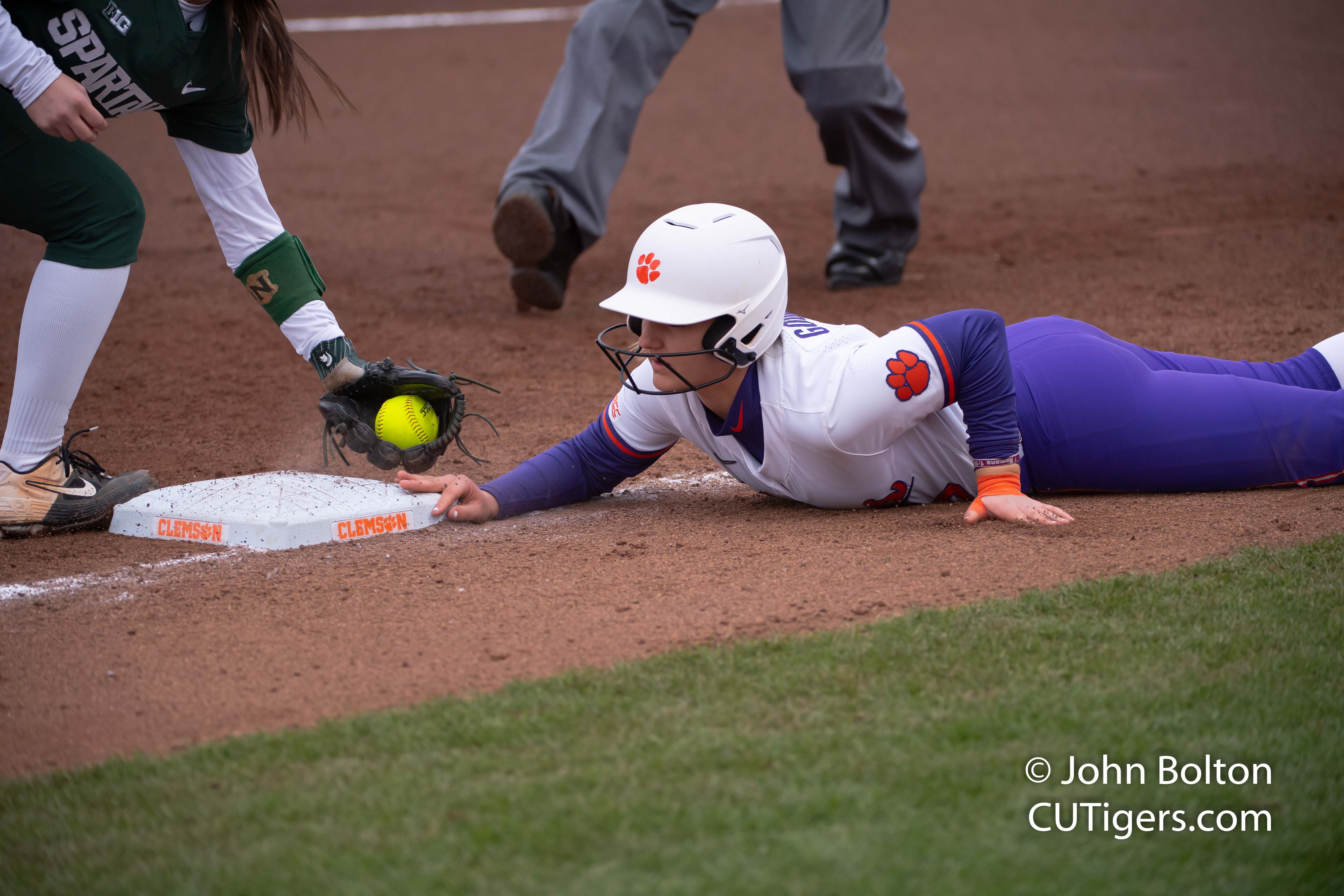 The Tigers swept the Big Ten, beating Maryland twice and Michigan State twice. They have won 5 straight and are now 7-4 on the season. Much of the credit goes to incredible pitching by Caymol, hitting by Guimbarda and both hitting and pitching by Cagle. Guimbarda has homered in 4 straight games. She and Cagle are tied for the team lead with 5 HR's each this season. The Tigers play at UNC Greensboro next on Wednesday at 3:30 and then play in a tournament in Florida. They don't return home until Wednesday 2/26 against Georgia. That will be a big one! 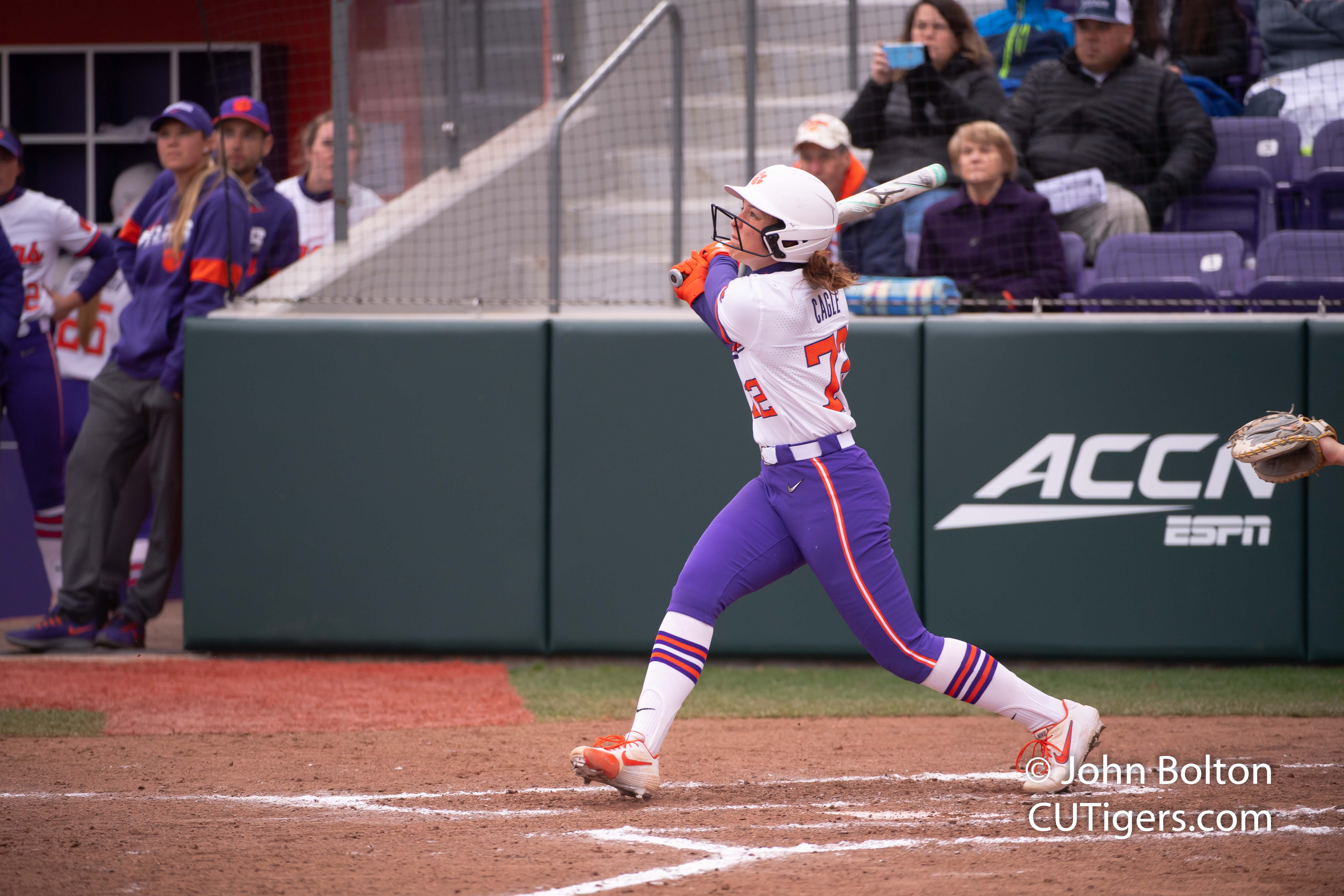 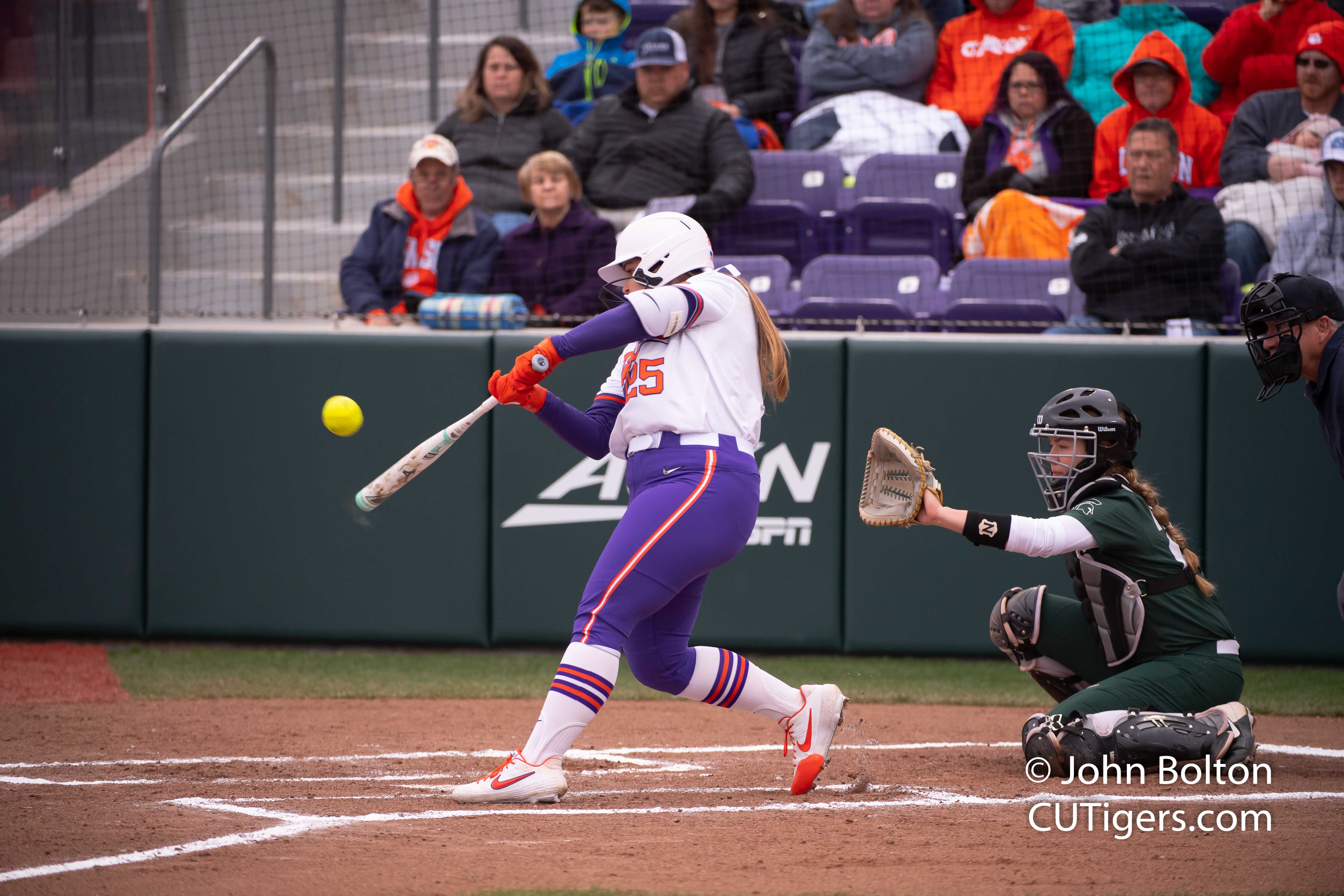