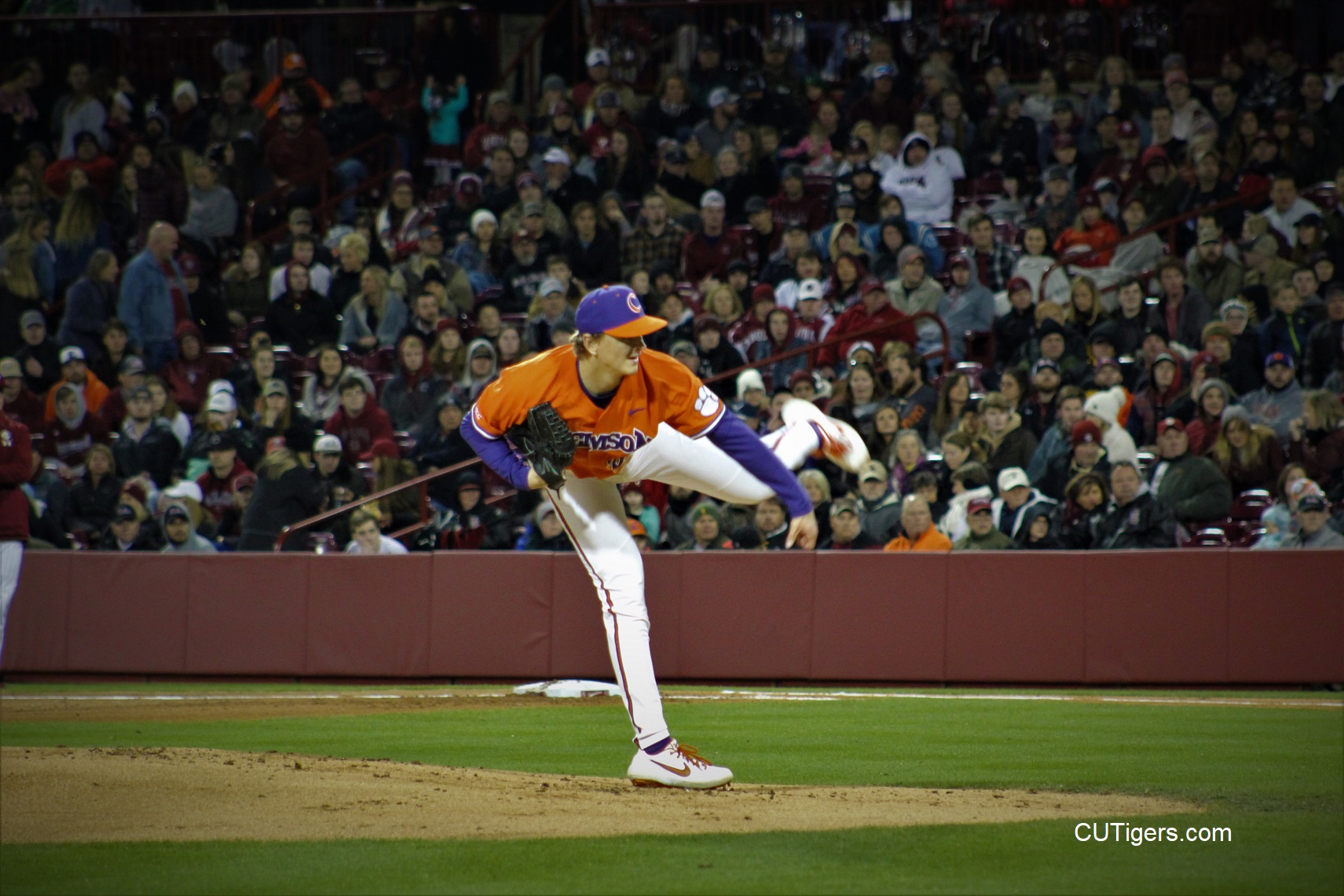 Photo by Trevor Groves CUTigers.com
COLUMBIA, SC - I guess the pitching is legit after all! Weatherly is now No.1 in the nation in K's per 9 after his 11 tonight. He has 33 in 17 innings this season. The Troy pitcher who was ahead of him before tonight had 6 K's in 6 innings against Florida, and Weatherly jumped past him.
We knew the pitching appeared to be great so far, but where did that offense come from? True freshman Dylan Brewer, Davis Sharpe and Kier Meredith each hit his first homer of the season on Friday after the entire team combined for just 2 HR's in the first 8 games. The Tigers were top-10 nationally in HR's each of the last two years, but early this season the offense was severely lacking. Many feared that against a presumably more talented team like the Gamecocks, the Tigers would struggle even more to produce runs. That wasn't the case on Friday. Kier Meredith was 4-5 and was just a triple short of the first-ever Clemson cycle. Brewer had a double in addition to his HR. Even Bo Majkowski finally registered his first hit of the season.
Aside from the surprise home runs, the story of the game was Sam Weatherly. Ironically, former Gamecock Michael Roth threw out the first pitch. He was the ace pitcher from the Gamecock's back-to-back national title run in 2010 and 2011 and the bane of the Clemson Tigers as well. Yet it was the Tigers' starter who stole the show with his 11 K's and no-hit performance through 7 innings. Teo made a diving web gem in center to preserve the no-hit shutout and end the 7th inning, but freshman Geoffrey Gilbert allowed a HR in the 9th for the Gamecocks' only hit. Gilbert would add 4 more K's in his 2 innings, giving the Tigers 15 in all.
It's too bad they couldn't finish the no-hit shutout, but Monte, the Tigers and Clemson fans have to be ecstatic about the performance and optimistic about what it could mean for this season! Tigers are now 8-1, and the pitching--at least two of them--appear to be as good as they seemed. If the hitting starts to come around, rejuvenated with confidence from Friday's explosion, this could be a very tough team to beat. And if they are able to take 2 of 3 in this series or sweep, don't be surprised to see the Tigers jump into next week's rankings. First pitch tomorrow is at 3:00 at Segra Park here in Columbia, and I'll have live coverage again right here.
Post-game interviews are below!
MORE CLEMSON BASEBALL, SOFTBALL, FOOTBALL AND BASKETBALL COVERAGE HERE