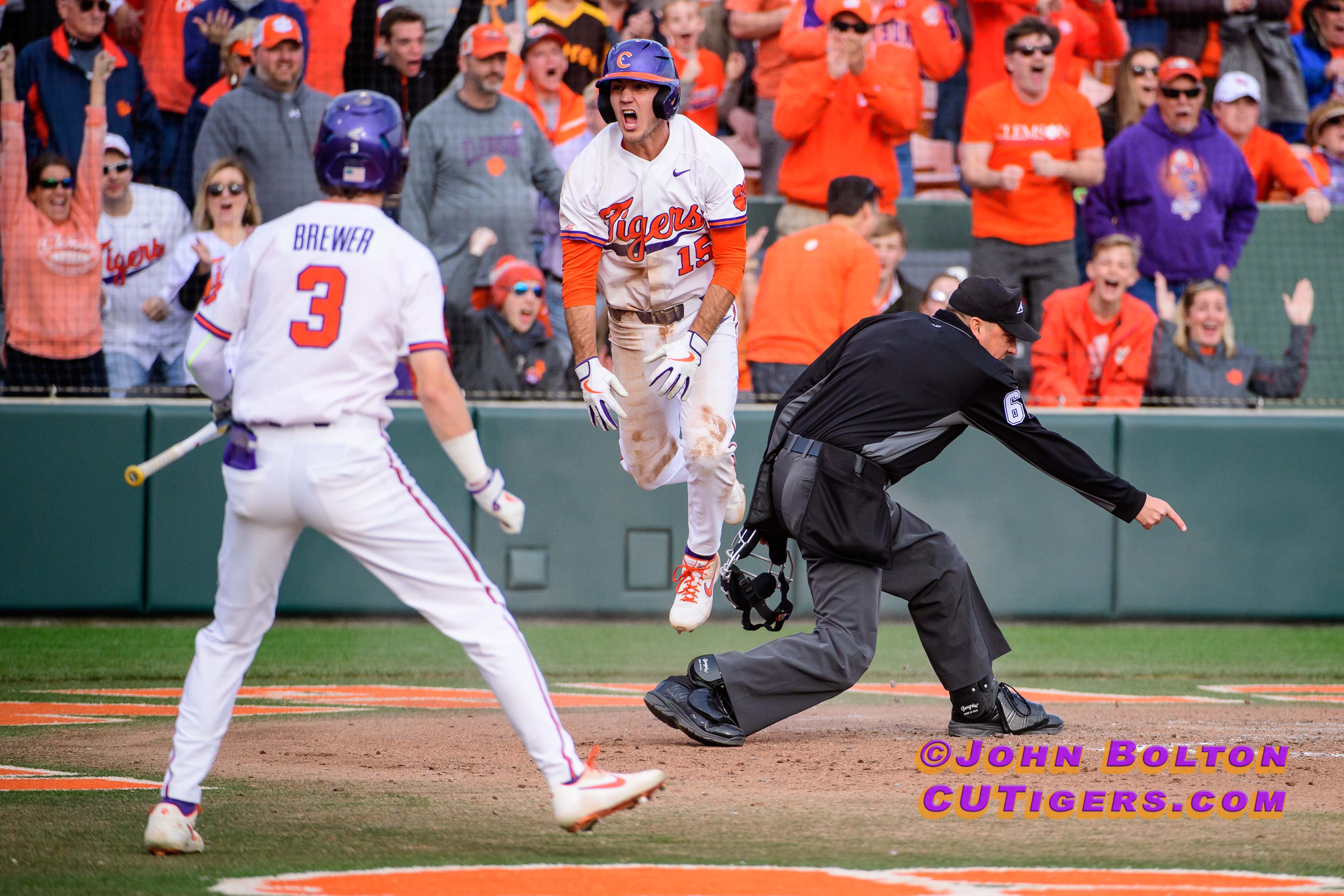 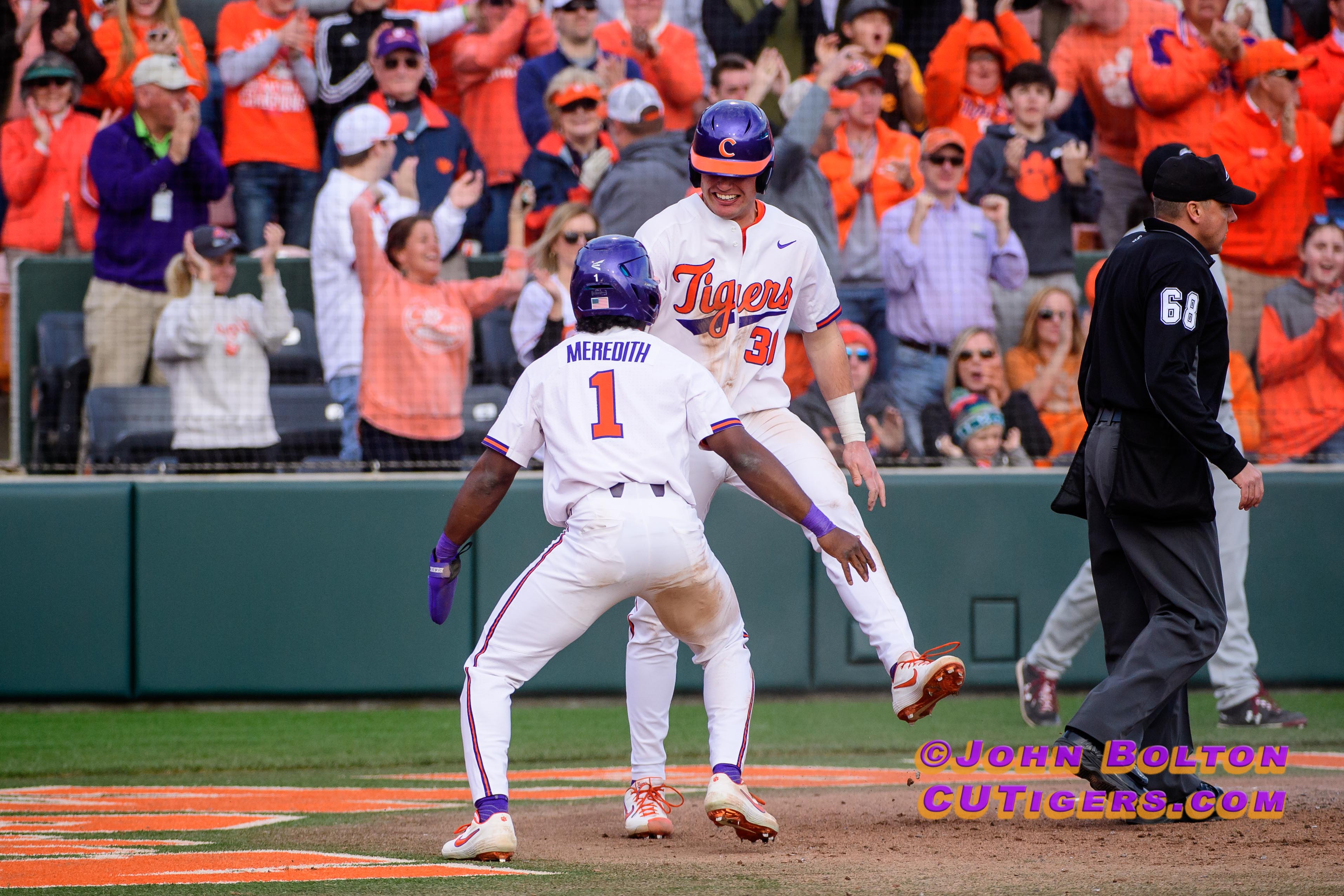 CLEMSON, SC - It was looking dicey there for the Tigers in Sunday's Palmetto Series rubber match in front of 5,655 fans at Doug Kingsmore Stadium. The game actually began much like Saturday's game in Columbia. The Tigers took a 1-0 lead in the 1st, but the Gamecocks responded quickly to take a 2-1 lead in the 2nd. The Tigers missed a golden opportunity for a rally in the 6th inning when they had bases loaded and no outs. Freshman Dylan Brewer flared a dying quail into shallow left field, and the diving Gamecock dropped the ball. As a result, Hawkins got a late start leaving 3rd base and was thrown out at the plate. To make matters worse, South Carolina Coach Mark Kingston requested a review of the play, and Hackenberg and Brewer crossed each other on the base path during the confusion on whether the ball was caught or not, resulting in a second out on the play. Sam Hall would strike out with runners on 2nd and 3rd to end the inning with no runs and the Tigers still trailing 2-1.
However, the Tigers didn't dwell on the bizarre turn of events. They came right back to load the bases again with one out in the 7th, and after Hawkins delivered a sac fly to tie the game, James Parker hit a 2-out double to score two more and put the Tigers up 4-2. Parker would add another insurance run on Hackenberg's 2-out single with an acrobatic head-first slide to avoid the tag at the plate. It shouldn't have been so close, Monte Lee said after the game, because Parker got a late start from 2nd, but he made up for the mistake with the slide! He was 2-3 with the double, a walk, 2 RBI's and the run scored. 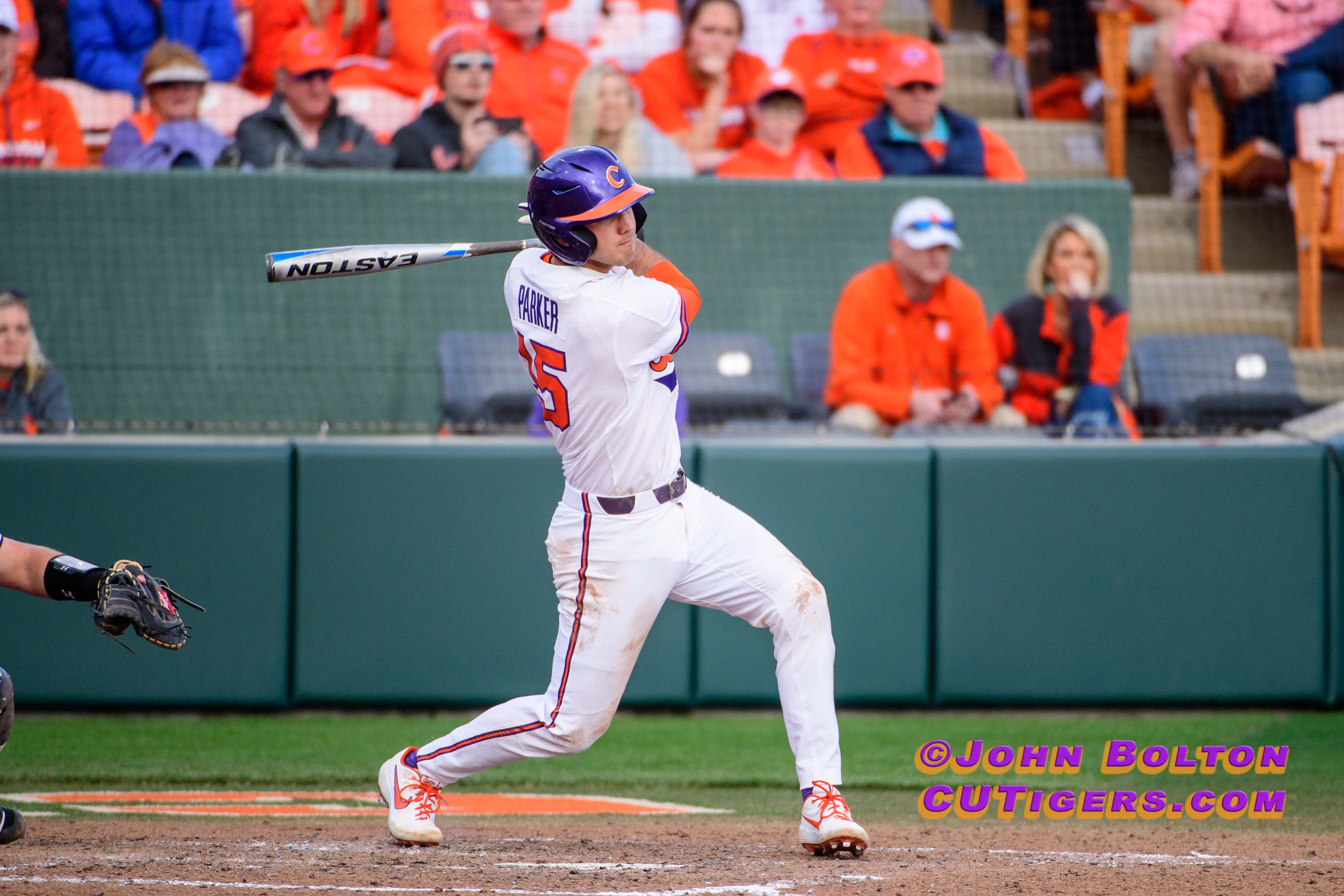 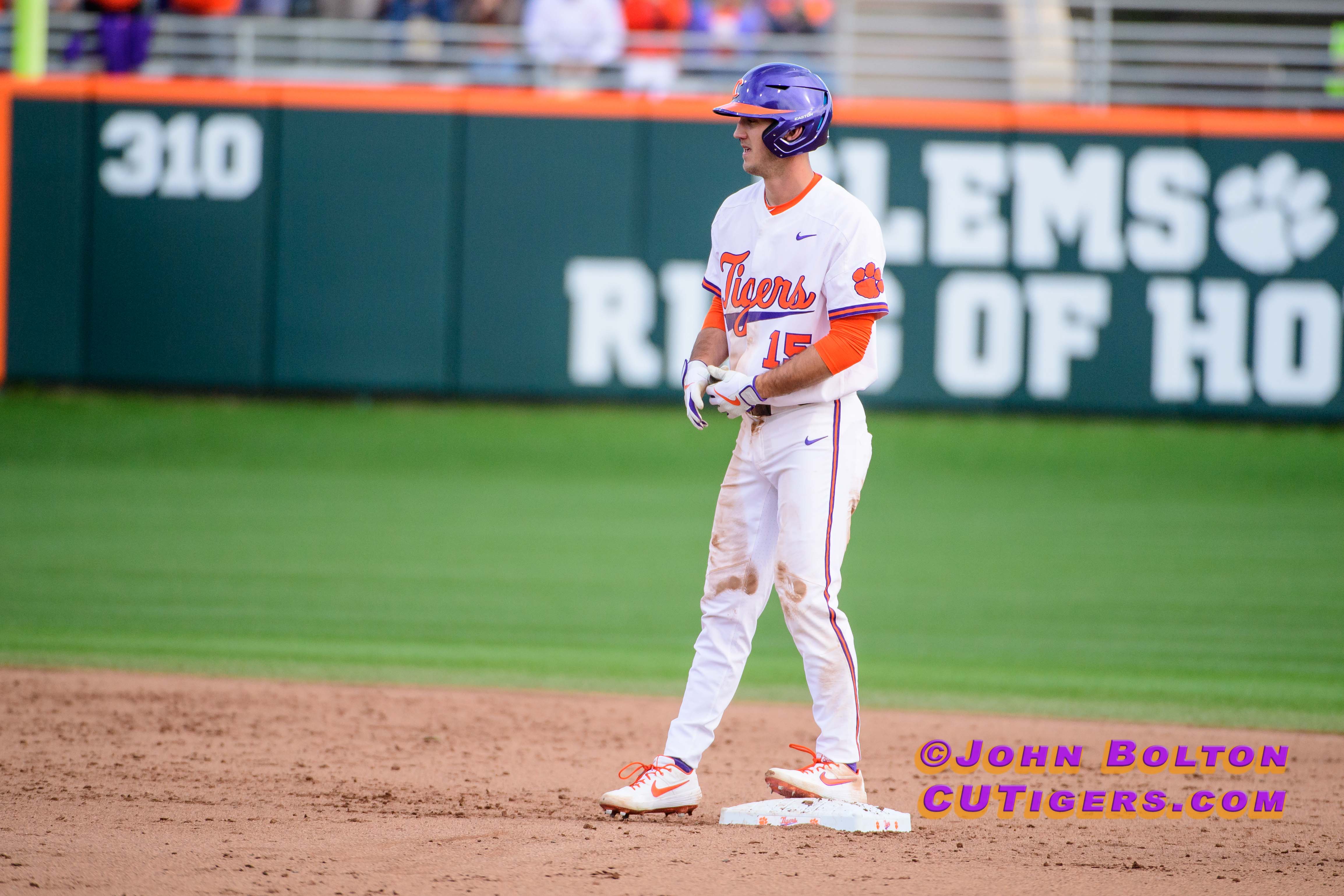 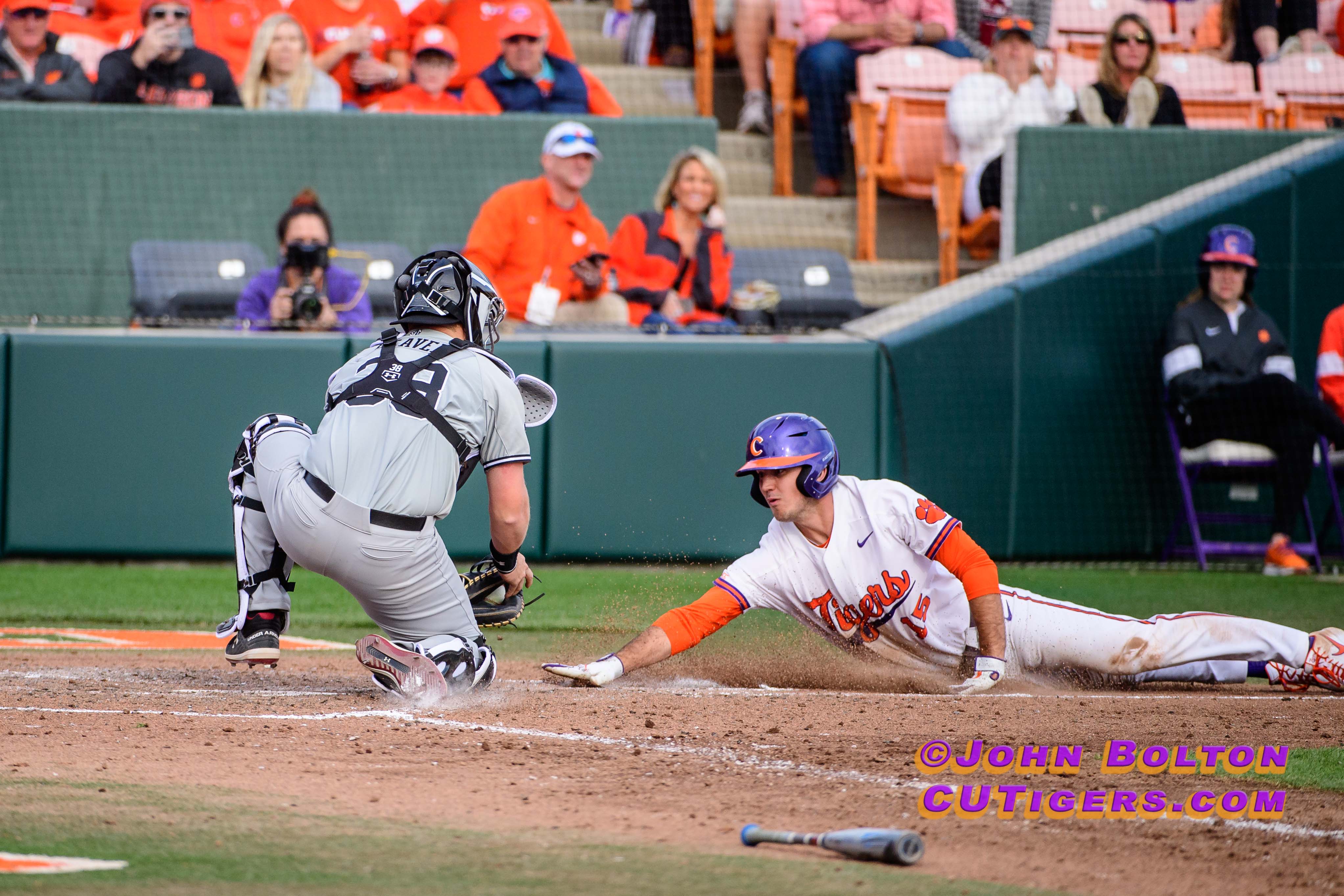 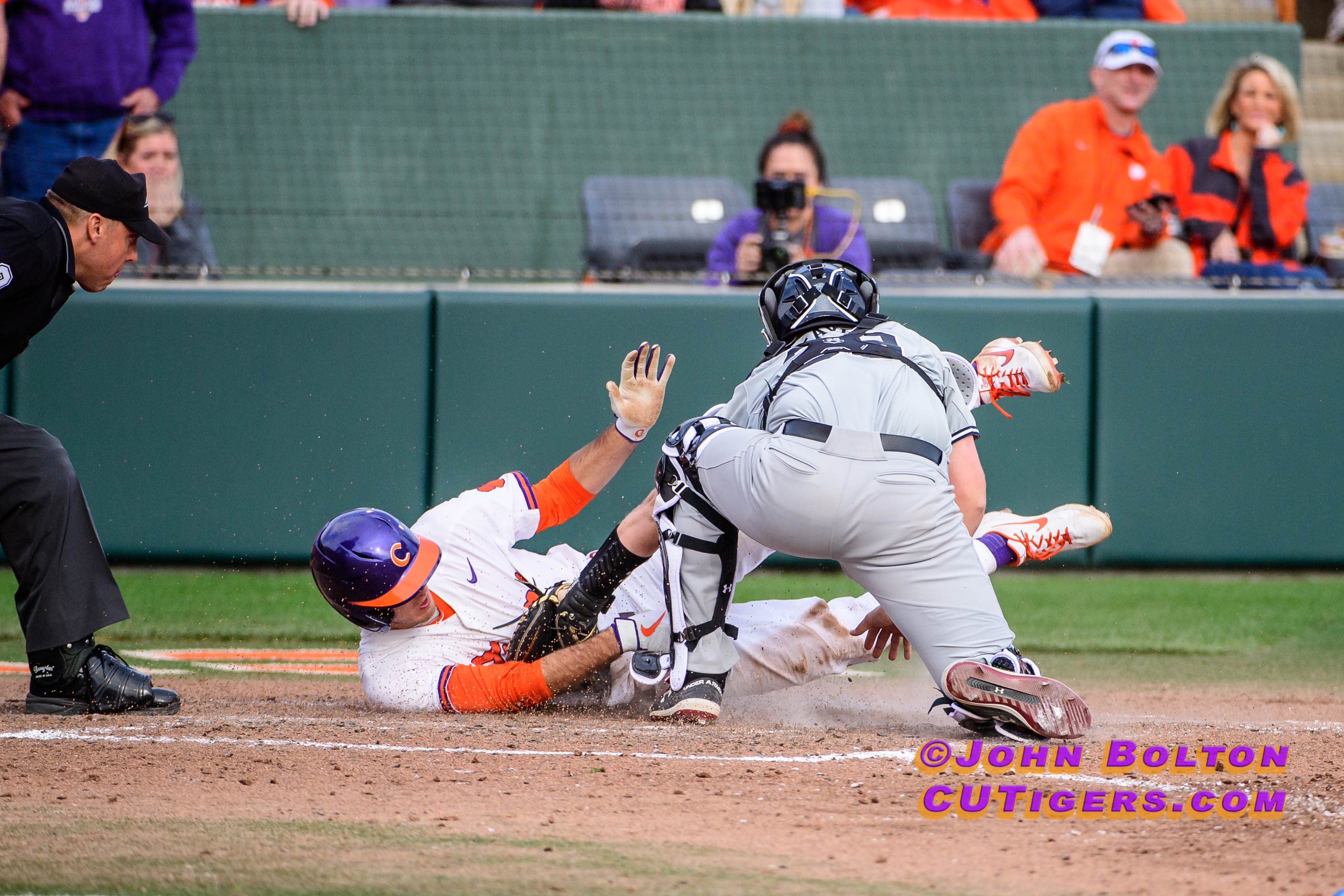 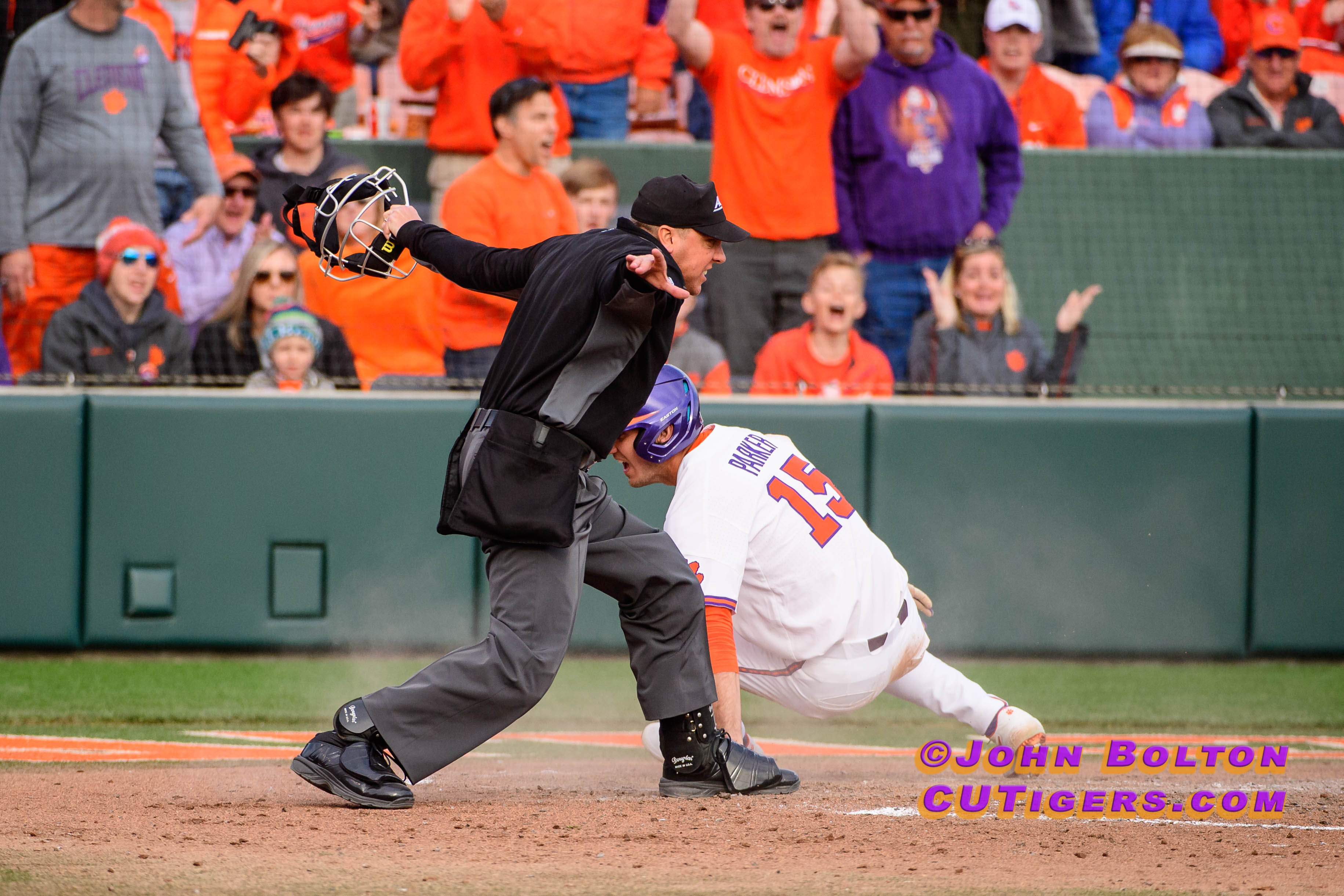 Spencer Strider made his 3rd start and after the rough 2nd inning in which he gave up two singles, a double and two runs all with 2 outs, he settled in and looked good. The team doctors are still holding him to that strict 50-pitch limit for now, though. He only went 4 innings on 49 pitches despite a perfect 4th inning with 2 strike outs. "Second starter" Mat Clark, as Monte Lee calls him, was outstanding out of the bull pen, going 3 innings and allowing just one hit with 4 K's. He is now 2-0 this season out of the pen. Spencer Strider started the 8th to collect his 4th save of the season. 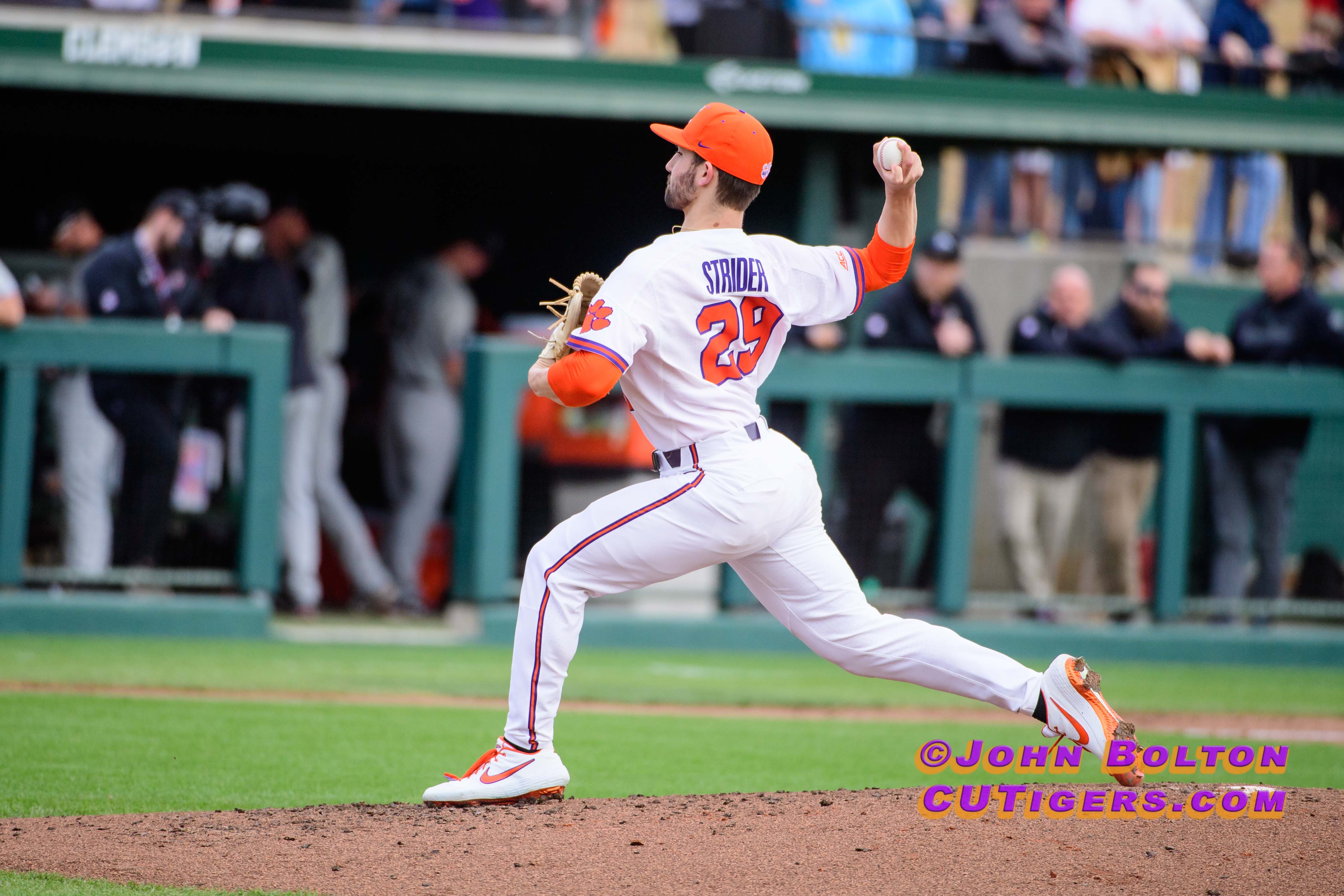 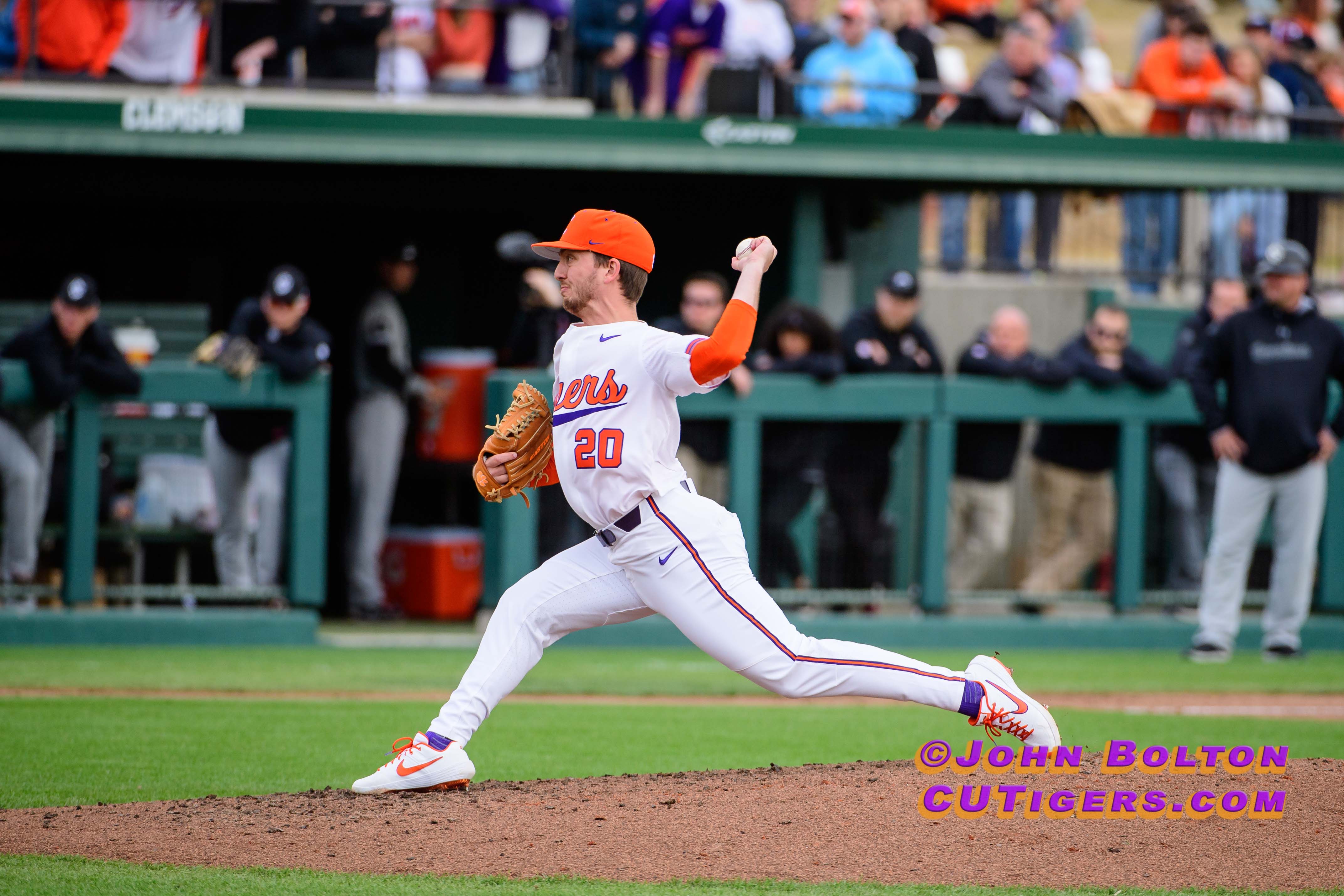 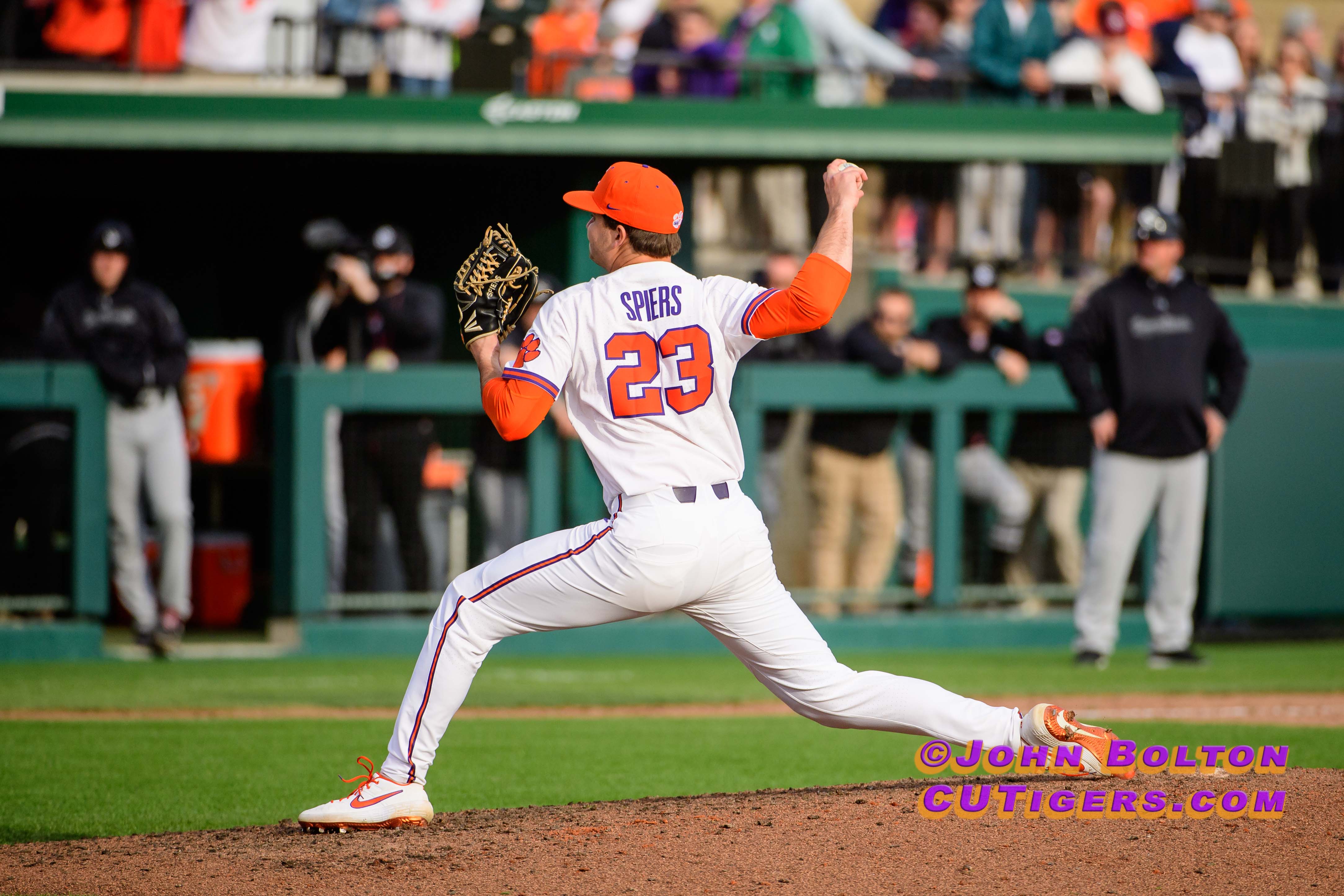 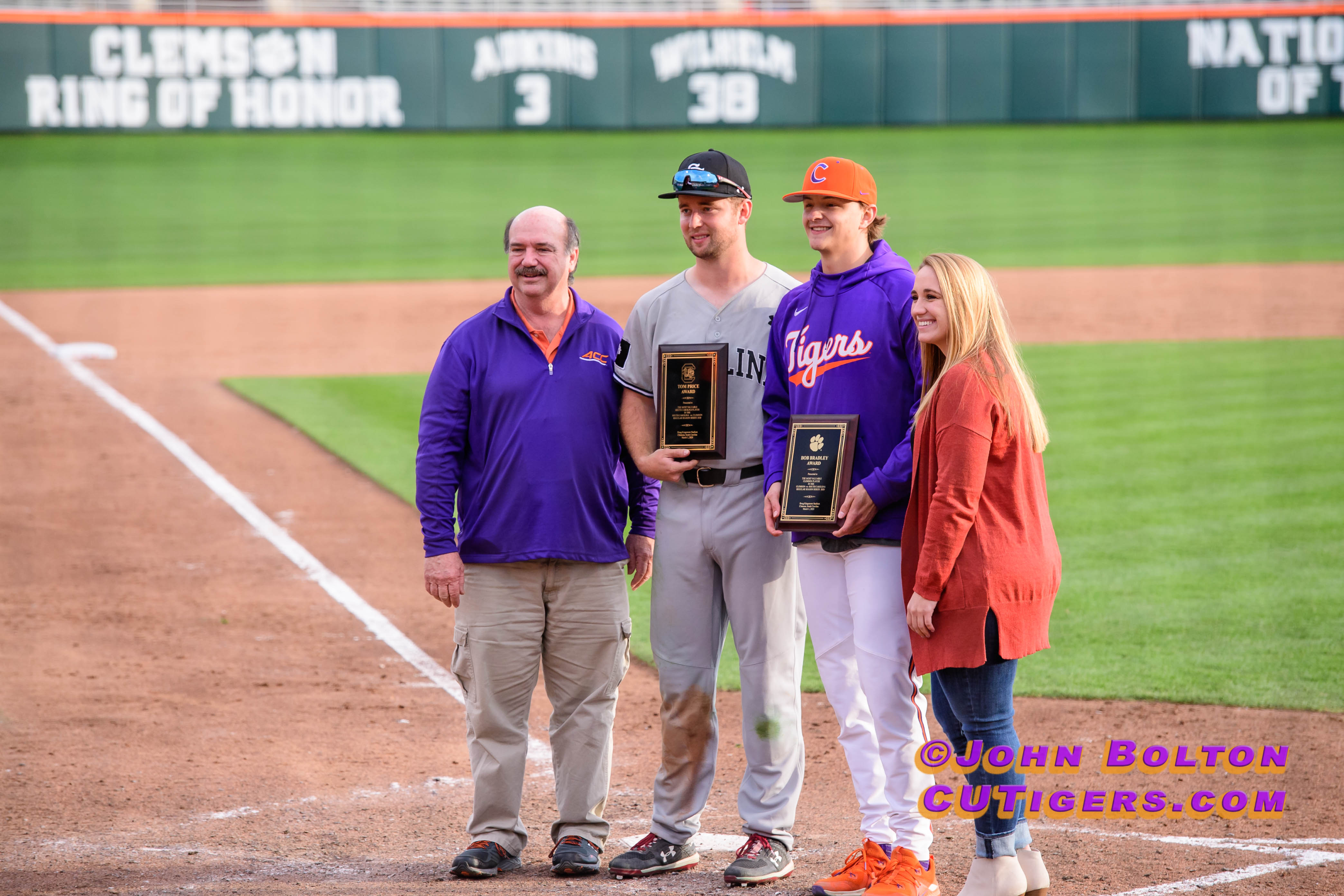 Kier Meredith had a tremendous series, going 7-13 with a HR. Sam Weatherly was named series MVP by the media due to his 7 innings of hitless work with 11 K's on Friday in Columbia.
The Tigers are now 9-2 on the season and have won the Palmetto Series 5 of the last 6 years! It's the 4th time former Gamecock assistant Monte Lee has beaten them in his 5 years as Clemson Head Coach.
Post-game interviews are below!
MORE CLEMSON SOFTBALL, BASEBALL, BASKETBALL & FOOTBALL COVERAGE HERE