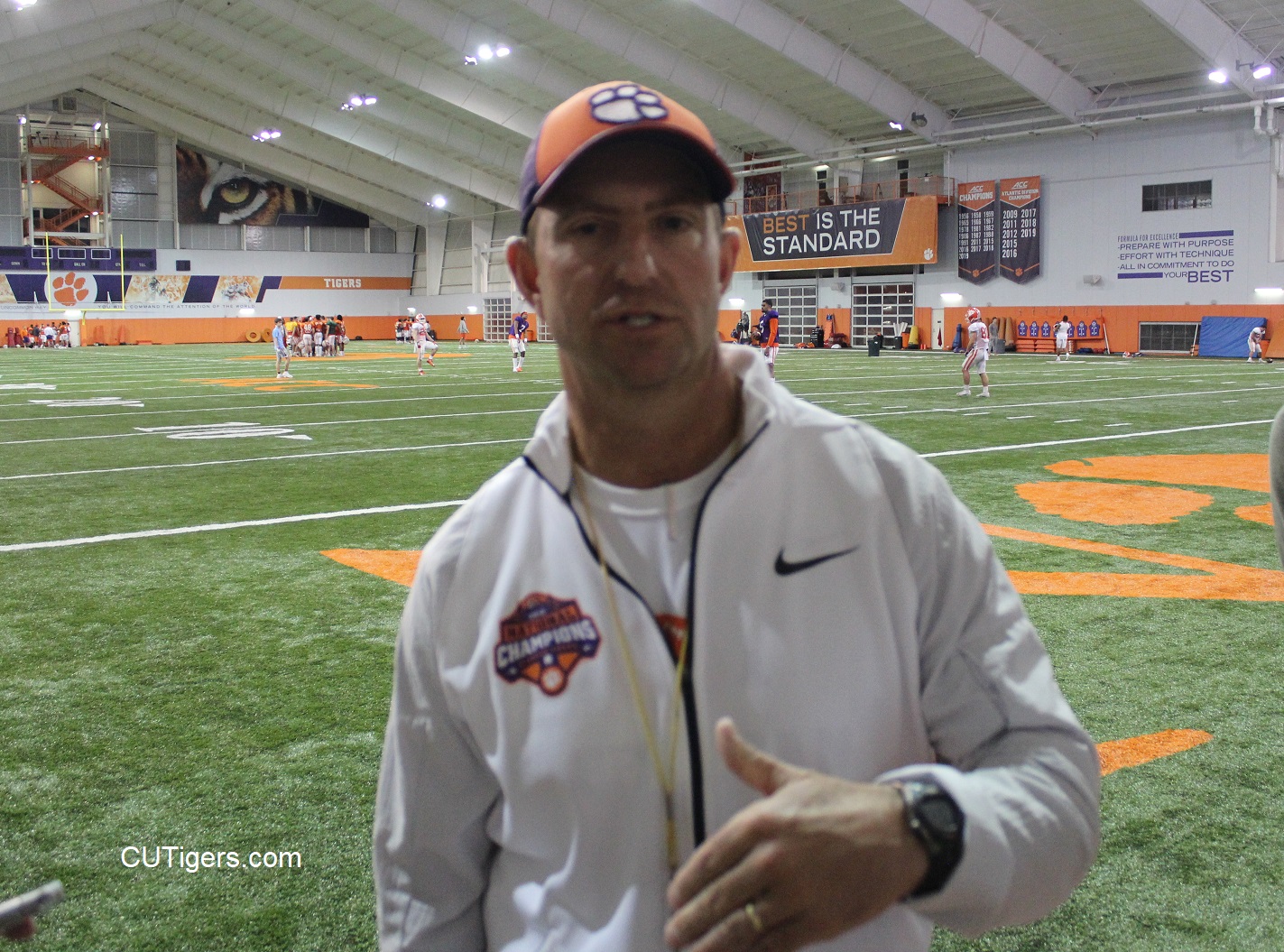 The Tigers went full contact for the first time this spring on Monday, and we spoke to Dabo, Travis Etienne, BT Potter and Will Spiers after practice. Dabo seemed very pleased with the intensity of the team and is excited about the early enrollees--particularly defensive linemen Bryan Bressee, Demonte Capeheart and Myles Murphy. Speaking of the defensive line, Dabo said it's night and day compared to this time last year, when there was virtually no experience on the defensive line after losing all four starters and Huggins. Nolan Turner is out for the spring after undergoing shoulder surgery, so it should be a very interesting competition at safety this spring. With Turner out, none of the top 4 safeties from last season are playing this spring. Dabo is very confident, though, in the talent and experience he has in that group. Landen Zanders, Ray Thornton and Joseph Charleston all saw substantial playing time last year, and Ray Mickens is a very talented freshman on campus now. Dabo also said he was very impressed with true freshman Tyler Venables, who played QB for Daniel High School last fall and is now playing safety for the Tigers. Former Daniel High QB Ben Batson is also in that group.
I asked Dabo about losing freshman kicker and soccer star Tanner Tessmann to the MLS the other day. Dabo laughingly said, "Dadgummit I should have kept my mouth shut!" Dabo referred to Tessmann as the Deshaun Watson or Trevor Lawrence of soccer back in December, and I guess the Dallas MLS folks were listening! Tessmann could still wind up kicking for the Tigers some day after his pro career is overs
Will Spiers is working with the quarterbacks this spring, simply to give them enough passes in drills with Ben Batson having moved to safety, and I talked with him about it after practice. He was a quarterback in high school, and his cousin Carson just picked up his 4th save of the season on Sunday against the Gamecocks. You can watch the interview below!
Finally, I asked Dabo about the depth chart at center, and he said it is very fluid and will continue to be. They've had a good run at centers from Jay Guillermo to Justin Falcinelli to Sean Pollard last year, but this year it is an open audition. Dabo is very optimistic about Cade Stewart, though, and he said Blake Vinson will also play both center and guard. Robbie Caldwell always cross-trains all the guys on the offensive line, so we might see someone else emerge at center before all is said and done.
The interviews are below, and I'll have practice photos for you in a bit!
MORE CLEMSON FOOTBALL, BASEBALL, BASKETBALL AND SOFTBALL COVERAGE HERE