WILL HE STAY OR WILL HE GO: A LOOK BACK AT THE CAREER OF CLEMSON JUNIOR AAMIR SIMMS 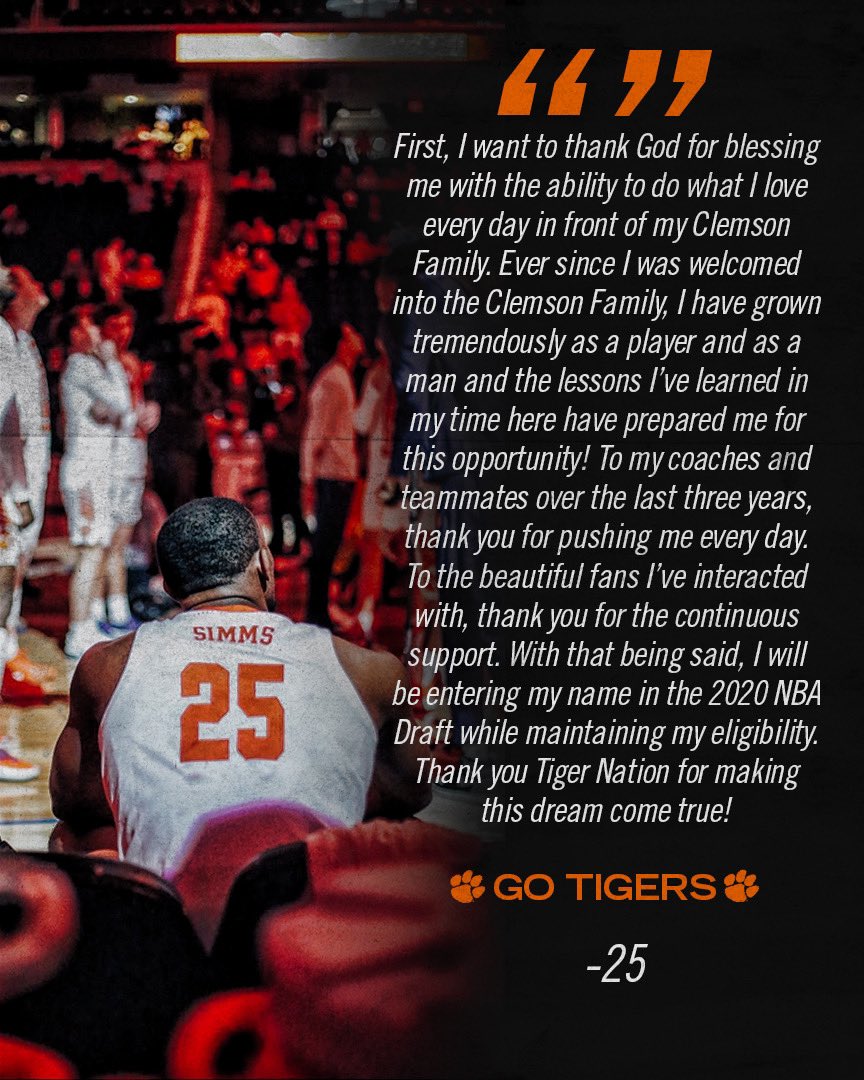 In what came as a surprise to many during the national sports hiatus caused by the Coronavirus, the Tigers’ most veteran player, junior Aamir Simms, announced via Twitter that he would submit his name for the NBA Draft. He has not hired an agent, so unlike football and baseball players, Simms will have the option of returning to Clemson for his final year after the draft is held. Since we may have seen Simms play his last game in a Clemson uniform, we thought it would be a good time to take a look back at his career. 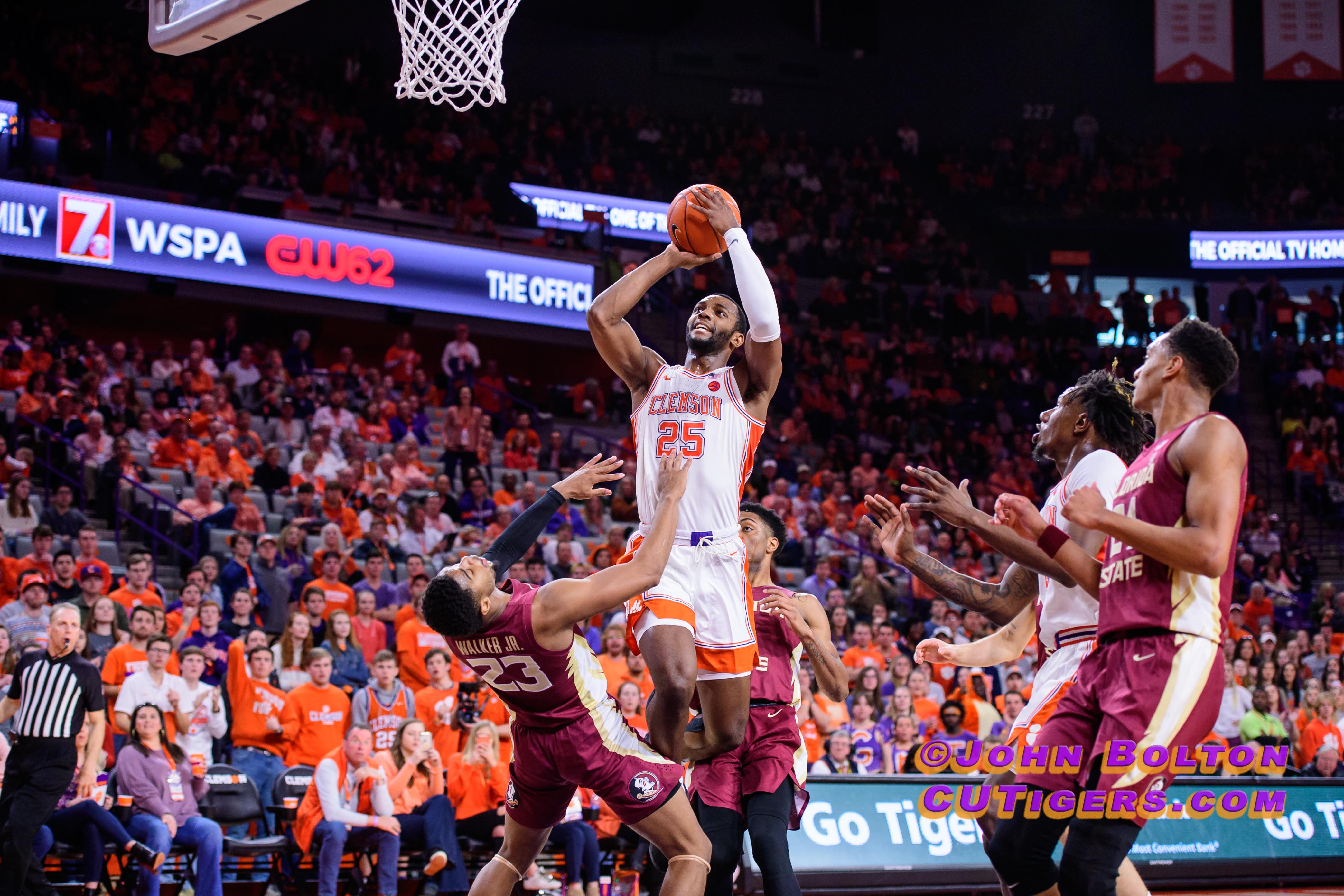 In January of 2018, senior starting forward Donte Grantham went down on the court in Littlejohn Coliseum against Notre Dame. Grantham suffered an ACL tear that ended his senior season early. Freshman Aamir Simms out of Palmyra, Virginia was snatched off the bench and given a starting spot in place of Grantham for the remainder of the season. He responded to the challenge immediately, hitting a much-needed three-pointer against Notre Dame in a thrilling victory for the Tigers. Before that, Simms hadn’t played much as a freshman, averaging just 15 minutes per game. After his insertion into the starting lineup for Grantham, Simms averaged 21 minutes in the next 16 games, starting in 12 of them. In the 34 games in which he played as a freshman, Simms finished with 135 points, 29 blocks and 100 rebounds. In the first game of the ACC Tournament, Simms posted 9 points and 9 rebounds against Boston College. He scored double digits in 3 games and was 4-4 from the field in the first game of the NCAA Tournament against New Mexico. The Tigers went on to make it all the way to the Sweet 16, barely losing to Kansas in Omaha with a partisan crowd, thanks in large part to the contribution from Simms. He put up respectable numbers as a freshman, but after finishing his junior season, his stats and accomplishments look much different.

Simms came to Clemson as one of the more heralded prospects recruited by Brad Brownell. According to ESPN, Simms was a 4-star prospect overall, the number 3 prospect in Virginia and the number 27 national prospect at the power forward spot. As a high school junior, he was second-team All-VISAA Division II selection. As a senior at Blue Ridge High School in Virginia, Simms was the Central Virginia Boys Player of the Year after leading his high school to its second state championship in three years, where he scored 16 points with 6 rebounds and 3 blocks. Also as a senior, Simms was named first-team All-VISAA Division II, second-team All-State by USA Today, team MVP, Bullis Holiday Classic MVP, Joe Miller Invitational MVP and Central Virginia All-Star Game MVP. He managed to earn all of these while juggling track and field throughout his four years, as well as baseball for one of those years.

As a junior in 2019-20, Simms’s season highs include: 25 points, 42 minutes played in a game, 10 field goals made, 11 defensive rebounds, 4 offensive rebounds, 7 assists, 4 blocks and 3 steals. Before his junior season came to an abrupt end literally as he was getting ready to take the floor against FSU at the ACC Tournament, Simms scored 391 points with 217 rebounds, 78 assists, 31 steals and 23 blocks. In the Tigers’ first-round ACC tournament win over Miami, Simms scored 14 points with 10 rebounds and 4 assists. Simms missed just one game when he had the flu, and the Tigers lost by 4 points to Notre Dame that night. After being asked how hard it was to watch his teammates out on the court while he had to sit home and recover, Simms stated, “I don’t really get sick, so actually getting sick and not being able to play was heartbreaking to me. Usually I would do everything that I could to get out there and play but I couldn’t in that condition, so not being able to play was really challenging. Seeing plays that I know I would have made if I was out there was also challenging, but I’m still proud of how my teammates performed and fought to the end. Even though they came up short, they still fought pretty hard even in my absence.”

It is natural to assume that to earn all of the awards and recognitions that he has and to play as well as he does, Simms had to start playing basketball at an early age, but you’d be wrong. Simms started playing basketball around 7th grade. He also started playing AAU (travel) basketball during his 7th grade year, which he continued through his senior year of high school. Learning the game during these years led Simms to winning two state championships in high school. The second title came in his senior year, and that turned out to be his favorite memory from high school basketball after losing the state championship during his junior year. His many years of playing also led to him earning 16 basketball offers from top schools across the country including Clemson, Pittsburgh, Miami, Virginia Tech, Notre Dame, Kansas State, Penn State, Central Florida, Providence, and Georgetown. Simms stated that his top three schools in the ACC were Miami, Notre Dame and Virginia Tech at one point.

In the end, however, the 4-star, third-ranked player in Virginia chose Clemson over everybody. When asked what the decision came down to, Simms answered, “The family atmosphere that everyone knows it for. My mom really loved the coaching staff, and they kind of gave me an image or some type of idea of where I wanted to be by my senior year or junior year, and from what they said – everything’s been following that course. The coaching staff and family atmosphere definitely helped me make my decision easier.”

Simms’s transition from Palmyra, Virginia to Clemson was not a difficult one. He believed that the areas right outside of Clemson are just like his hometown, so “transitioning from the country to the country” did not affect him at all. As he settled into his new home in South Carolina, he quickly became comfortable with the town and all of the people in it. When asked what he loves most about Clemson, Simms stated, “My favorite thing about Clemson is the support from everybody no matter what sport it is. Anything you go to, you’re going to see a lot of people there. No matter the record or how the teams are playing currently, people come out to support and I think that’s what makes Clemson very special.”

Since he has been at Clemson, Simms has been able to be a part of a lot of special things within Clemson Basketball. One of these special things was winning a gold medal in the World University Games in Italy during the summer of 2019. The Clemson team that won the gold medal had not even practiced together as a whole until they got to Italy. Simms noted that star graduate-transfer Tevin Mack had not even become a part of the team until a week or two before the games. When asked about his experience at the World University Games, Simms stated, “There was four of us to a room, so it felt like AAU in a sense – bonding with your brothers and getting to know them since we all didn’t know each other.” Clemson beat Ukraine by a score of 85-63 to bring home the gold medal after going 6-0 in the tournament and winning 4 games by 3 points or less. Simms scored 12 points in the final game after a monster semifinal in which he carried the Tigers to a close win over Israel.

Although it may seem small compared to winning a gold medal in an international tournament, Simms’s favorite college basketball memory so far is beating North Carolina in January of 2020. Simms remarked, “Just taking that boulder off of my coach’s back and the whole university’s – people can let that go finally.” Just three days later – one day after Clemson’s football team lost a heartbreaking National Championship in New Orleans – Clemson’s basketball team came out and beat No.3 Duke by 7 points. In response to how he felt after beating college basketball’s notably two most popular powerhouses, Simms stated, “That was a great experience. I was very happy to see my guys out there playing hard and playing together. No matter what our record was at the time, we just went out there and played hard - It just shows that grit that we have within our culture. It was just a great thing to do since it hasn’t been done since the 1990’s in our program.”

Everyone in the world has a “why.” Why we wake up every day and continue to do what we do despite the circumstances and why we push to be better people every day. For Simms, his “why” is his parents. Simms stated, “My mom is a very diligent worker. My dad is in construction, so I already got that ‘wake up early and grind all day’ kind of attitude. My inspiration comes from my parents.” The inspiration that he gets from his parents goes far beyond the basketball court, though. Simms is a Non-Profit Leadership minor at Clemson. Although basketball is most definitely in his future after college, Aamir believes that, “Once the ball stops bouncing – or while it’s still bouncing – I plan to give to nonprofits, tackling third world country issues and trying to help the bigger pictures and do things for the greater good.” So, although we do not know which parent he got his athleticism from, we at least know that both of his parents helped to put a good head on his shoulders. With that being said, although we are ecstatic to watch Simms grow as a leader on the basketball court, we are even more excited to watch him grow as a leader off of the basketball court. And whether Simms decides to take his talent to the professional ranks or return to Clemson next year, his future is very bright on the court. 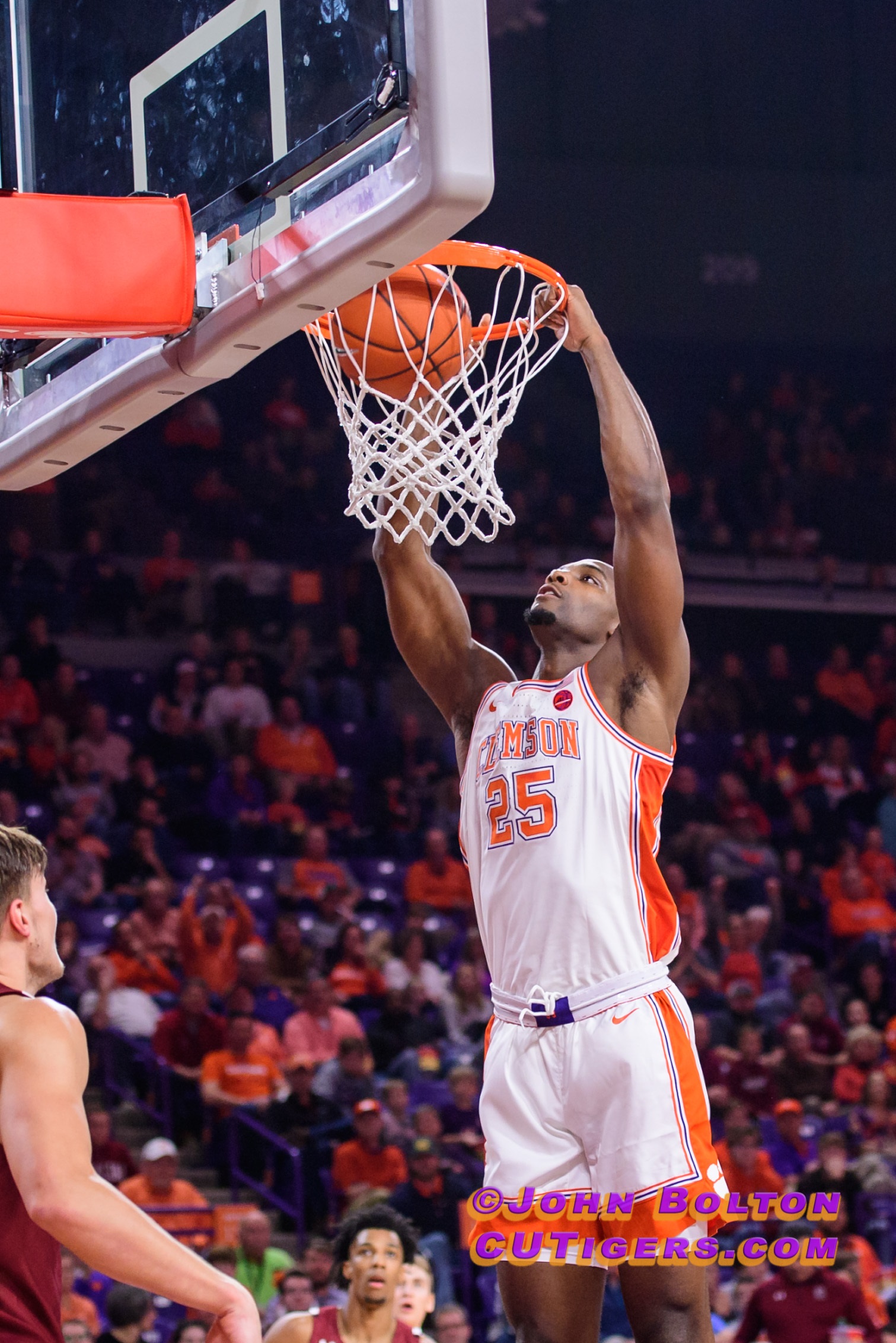