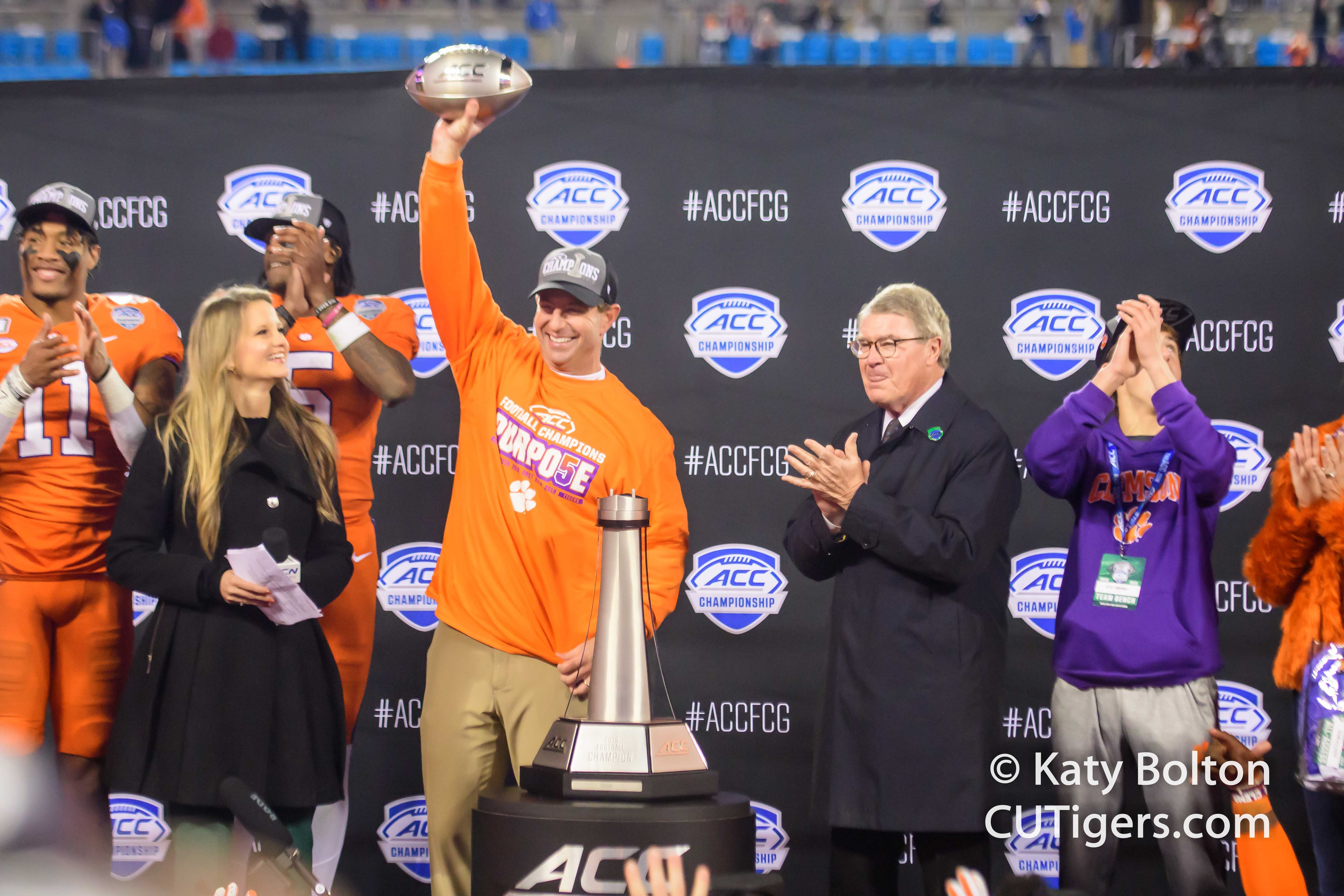 The ACC has just announced its decision for the 2020 season! The Tigers will play 10 ACC games, plus the Palmetto Bowl with the Gamecocks, keeping the longest continuous rivalry in the south alive. They still play at Notre Dame, which will play a full ACC schedule and be eligible for the ACC Championship Game, and add a road game at VT and home games with Miami & Pitt. The ACC Championship Game in Charlotte will be on December 12th or 19th, and the Tigers may have to play Notre Dame twice! There will be no divisions, so it's the two teams with the best winning percentage meeting in Charlotte, much like the Big 12 format.
When the Big Ten and Pac 12 announced that they were playing conference-only schedules, eliminating 3 games for Notre Dame, I proposed that ACC Commissioner John Swofford should use the opportunity to force Notre Dame into finally joining the ACC permanently for football. If the ACC went conference-only and excluded Notre Dame, it would have left the Irish with just 3 games--only one of them Power Five--and effectively ended their season, costing them tens of millions of dollars with no bowl game. Well, apparently Swofford let Notre Dame off the hook unless there was some secret agreement, and the Irish will be allowed to participate as a member of the ACC for this one season only. Clemson and the ACC will benefit by sharing Notre Dame's TV revenue from its NBC contract for the 2020 season, but I would have forced Notre Dame to join permanently. Perhaps this is a step toward that end, and only time will tell, but it seems to me that if Notre Dame refused to permanently join in this unprecedented situation that it never will. Look out for that Notre Dame game at UNC, by the way. That wasn't on the original schedule, and I think the Heels could pull the upset. Their game at Pitt will be no walk in the park either. 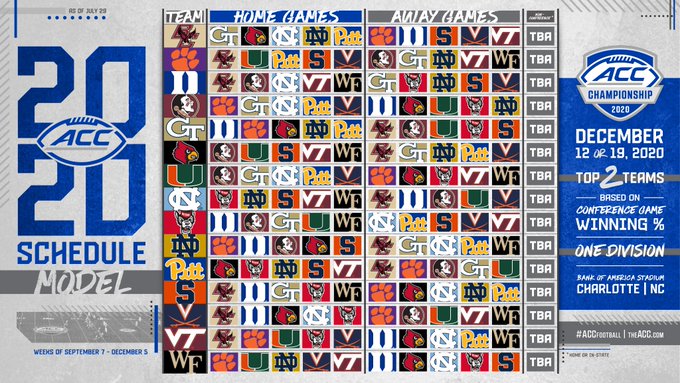 The season opener was supposed to be Thursday 9/3 at Tech in Atlanta, but that is no longer the case. The first game will be the week of September 7-12, but that is all we know at this time as far as dates.
Click on the link below for daily updates!
MORE CLEMSON FOOTBALL COVERAGE HERE
GREENSBORO, N.C. (theACC.com) – The Atlantic Coast Conference recognizes the uncertain and challenging environment all areas of our society are facing during the COVID-19 pandemic. Intercollegiate athletics is just one area that we must address as we work to return to our campuses, bring back students and faculty when possible, and pursue our academic missions and goals as part of higher education. The health, safety and well-being of all our campus constituents is at the forefront of all decisions.
With this in mind, the ACC Board of Directors announced that if public health guidance allows, all seven ACC sponsored fall sports will begin competition during the week of Sept. 7-12. The announcement follows several months of discussion and scenario planning among the league membership and Medical Advisory Group. Each decision is based on the best available medical guidelines and coincides with our universities’ academic missions.
“As we look ahead to the fall, the safety of our students, staff and overall campus community continues to be our top priority,” said Kent Syverud, Chancellor of Syracuse University and the Chair of the ACC Board of Directors. “Today’s announcement outlines a specific path for ACC fall sports to return to intercollegiate athletic competition using comprehensive protocols put forward by our ACC Medical Advisory Group. As a league, we understand the need to stay flexible and be prepared to adjust as medical information evolves in conjunction with local and state health guidelines.”
“Today’s decision was made after months of thoughtful planning by numerous individuals throughout the conference,” said ACC Commissioner John Swofford. “The Board’s decision presents a path, if public health guidance allows, to move forward with competition. Our institutions are committed to taking the necessary measures to facilitate the return in a safe and responsible manner. We recognize that we may need to be nimble and make adjustments in the future. We will be as prepared as possible should that need arise.”
The ACC’s Medical Advisory Group, which has been meeting weekly since the spring to share information on the impact of COVID-19 on ACC campuses and intercollegiate athletics, has recommended minimum standards for each campus to follow as fall sports return. Among those recommendations are weekly testing for close contact sports, standards for reporting positive test results, and protocols for cleaning and sanitizing competition areas. The full report is available on theACC.com.
Information specific to 2020 competition for both football and the league’s Olympic Sports is included below. The league’s leadership, and its medical advisory group, will continue to meet on a weekly basis to share information and discuss medical issues related to the ACC’s return to play. Should any future adjustments be necessary, the ACC Board of Directors will do so at the appropriate time.
ACC Football:
ACC Fall Olympic Sports:
ACC Winter and Spring Olympic Sports:
CLEMSON, S.C. — The ACC Board of Governors announced on Wednesday Clemson's revised 2020 schedule format and opponents due to the COVID-19 pandemic. The 2020 schedule features a 10+1 format, where each ACC team plays 10 games against ACC opponents and one non-conference contest. There are no divisions for ACC football in 2020.
Dates for the 11 games and Clemson's non-conference opponent will be announced at a later date. Clemson's first game is slated for the week of Sept. 7-12, while the last game of the regular season is scheduled for the week of Nov. 30 - Dec. 5.
Notre Dame is playing a 10-game ACC schedule in 2020 and is eligible for the ACC Championship Game, slated for either Dec. 12 or Dec. 19.
More information on stadium capacity and other operational details on parking and ticketing will be communicated in the coming weeks.
Clemson's Home ACC Opponents
Boston College
Miami (Fla.)
Pittsburgh
Syracuse
Virginia
Clemson's Road ACC Opponents
Florida State
Georgia Tech
Notre Dame
Virginia Tech
Wake Forest