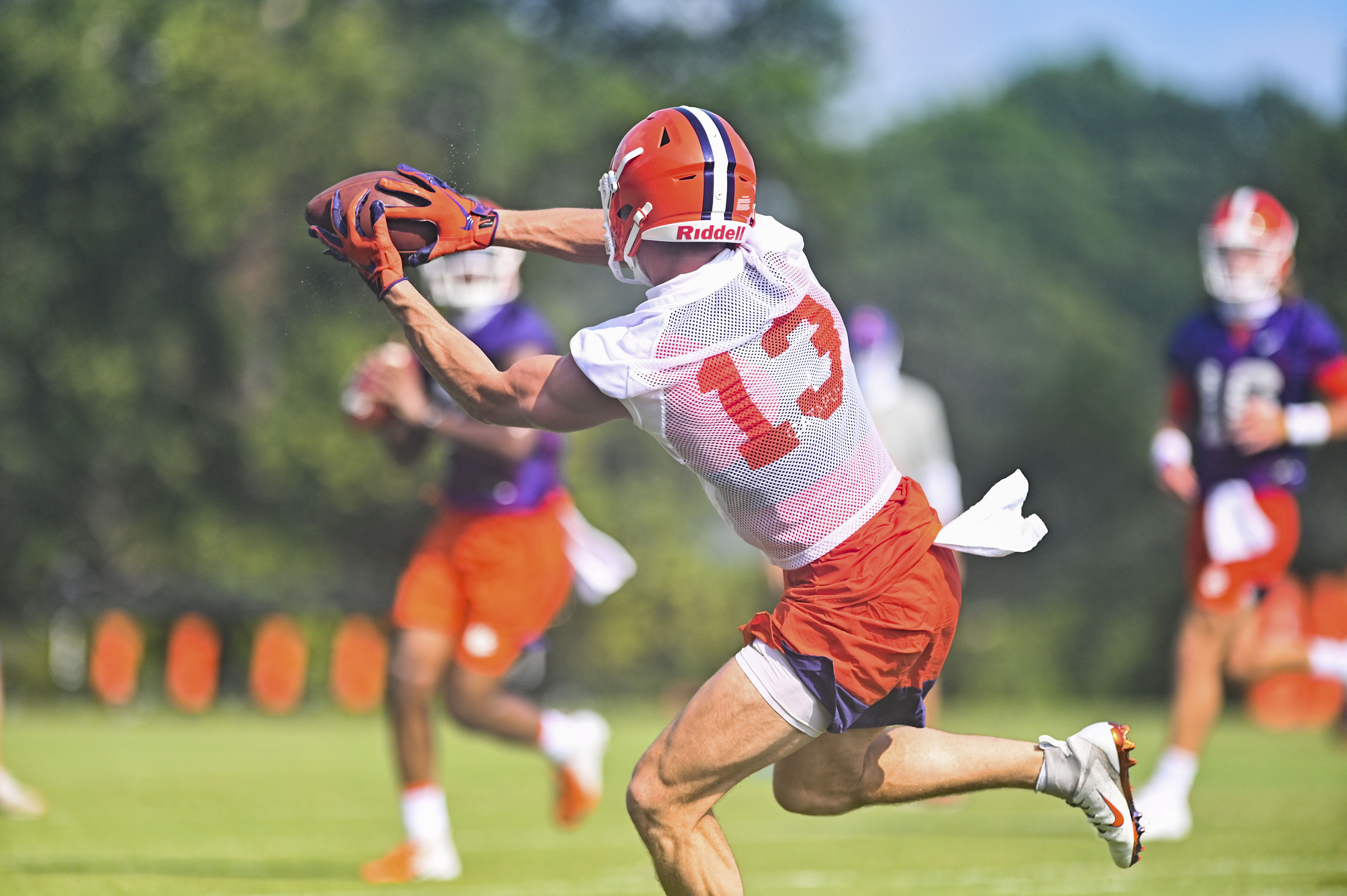 CLEMSON, SC - In the eyes of the Clemson fan base, wearing #13 at the WR position for the Tigers might be somewhat akin to being the new starting quarterback for Notre Dame. Being a freshman in that role might be all the more daunting, but Brannon Spector has the talent and confidence to embrace the role with vigor. After red-shirting last season as a true freshman, Spector will don the same number as one of the most beloved Tigers of all time, Hunter Renfrow. And before Renfrow wore the number for four seasons, setting a national record for College Football Playoff TD catches, #13 graced the jerseys of current NFL veteran Adam Humphries and current Clemson WR Coach Tyler Grisham, so the Tigers have had quite the run of 13's under former WR Dabo Swinney's watch.
Spector certainly comes in with more name recognition than former walk-on Hunter Renfrow. He's the younger brother of Clemson starting linebacker Baylon Spector and was a solid 3-star recruit in high school. At 6'1 and 197 pounds, he also has a considerable size advantage over Renfrow and also has better top-end speed. However, Renfrow had amazing hands, quickness and savviness that few players have, and those attributes led him to a remarkable college career, two national titles and a draft pick by the Las Vegas Raiders. It remains to be seen if Spector can match or even exceed Renfrow in those other areas, but Dabo is already convinced that the freshman will become a superstar for the Tigers and said that he was so good last year as a true freshman that they almost didn't red shirt him. Offensive Coordinator Tony Elliott is also very impressed with the young slot receiver. After the Tigers' first stadium scrimmage of August Camp, I asked Elliott to compare Spector to Renfrow: "He looks a lot like him in that 13, but he's bigger, just as quick if not quicker...he's pushing that 6'2 range. Very natural ball skills, just has a knack for receiver. So he looks very similar to Hunter. Not quite as savvy yet because he doesn't have the experience, but I think he's gonna have more top-end speed, and he has the same short-area quickness," he said.
It will be interesting to see how much playing time Spector receives behind starter Amari Rodgers at the slot position, but if history is a guide, we should see quite a bit of him with the number of blowout wins the Tigers are likely to have. More players have seen the field for Clemson than any team in the nation in each of the last two seasons, and if Spector continues to impress in practice, there's a good chance you'll see him regularly, even when the game is tight. "As far as Humprhries and Coach Grish and Renfrow, it's awesome to just carry on and not necessarily play their game, but just be great. All three of them were great receivers. I'm just here to keep that standard high," Brannon said after practice on Monday. Dabo always says "Best is the standard," and at "WRU," that standard is higher than anywhere. Clemson fans will always think of Hunter Renfrow when they see #13, but I'm personally excited to see what the latest #13 can do for the Tigers over the next 4-5 years.
Click on the link below for our full interviews with Brannon and his big brother Baylon, plus much more!
MORE CLEMSON FOOTBALL COVERAGE HERE