NO.1 CLEMSON CRUISES IN SEASON OPENER, WINS 37-13 AT WAKE FOREST

1-0 and 13 to go! In front of zero fans, the 125th season of Clemson Football has finally begun, and after the most scrutinized season opener in those 125 years, the Tigers performed about as well as they have in any opener and looked like the No.1 team in the nation, as I expected. The backups were somewhat underwhelming—the Tigers were outscored by Wake 13-10 in the second half—but they are more talented than any team in the nation and gained some valuable early experience. As usual, Dabo was able to clear his bench and play 78 of the 80 players who made the trip—2 more than their nation-leading average last season. My score prediction was 55-6, and the Tigers were right on pace to hit that mark with a 27-0 lead at halftime. However, the backup quarterbacks struggled to mount scoring drives, and the third-stringers on defense gave up some big plays in the second half, resulting in the 37-13 final. Keep in mind, too, that the Tigers were without several key players due to illness, quarantine protocols or injury. They included starting DE Justin Foster, starting CB Derion Kendrick, co-starting CB Mario Goodrich, backup center Hunter Rayburn and sophomore running backs Chez Mellusi and Michel Dukes. 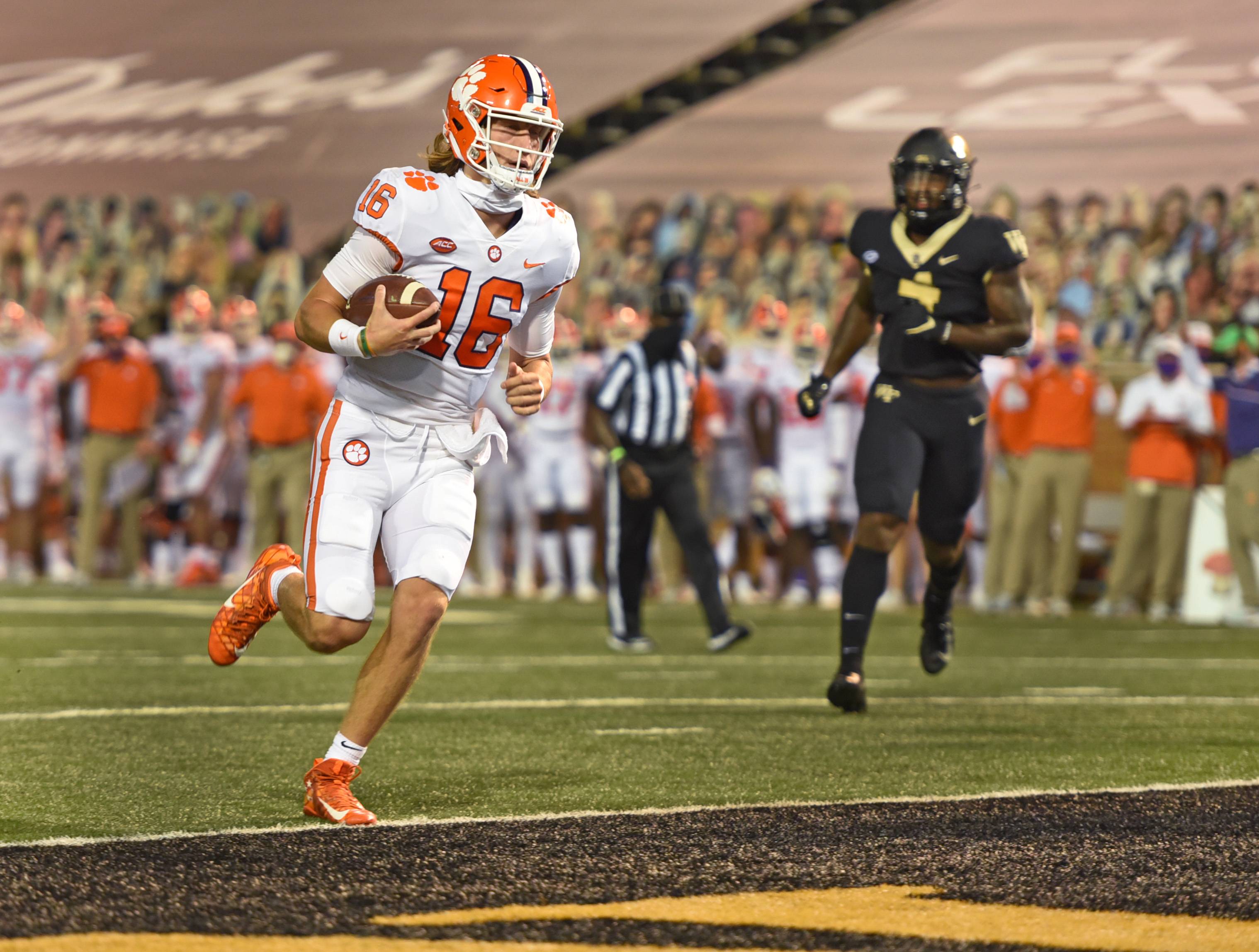 Unlike so many teams after a turbulent spring and summer, the Tigers’ starting group was a well-oiled machine on both sides of the ball. Trev and Trav led the offense up and down the field, seemingly at will. Like last year, Lawrence scored the first touchdown of the season with his legs, and he did it again for the second TD, walking into the end zone untouched both times. He was brilliant in his 2020 debut, racking up a 195.7 QBR while passing for 351 yards, 3 total touchdowns and no interceptions in just over a half of play. He wasn’t perfect—he dropped a snap near the end zone that cost them 4 points, took a bad sack and missed an open receiver for a 1st down—but it was certainly a Heisman-worthy season debut, especially given everything it took to get here. He would have had two pass TD’s instead of one, but Amari Rodgers dropped a 40-yard pass in the back of the end zone because he lost concentration. Trevor would end up with one of his two running TD’s instead on that drive. 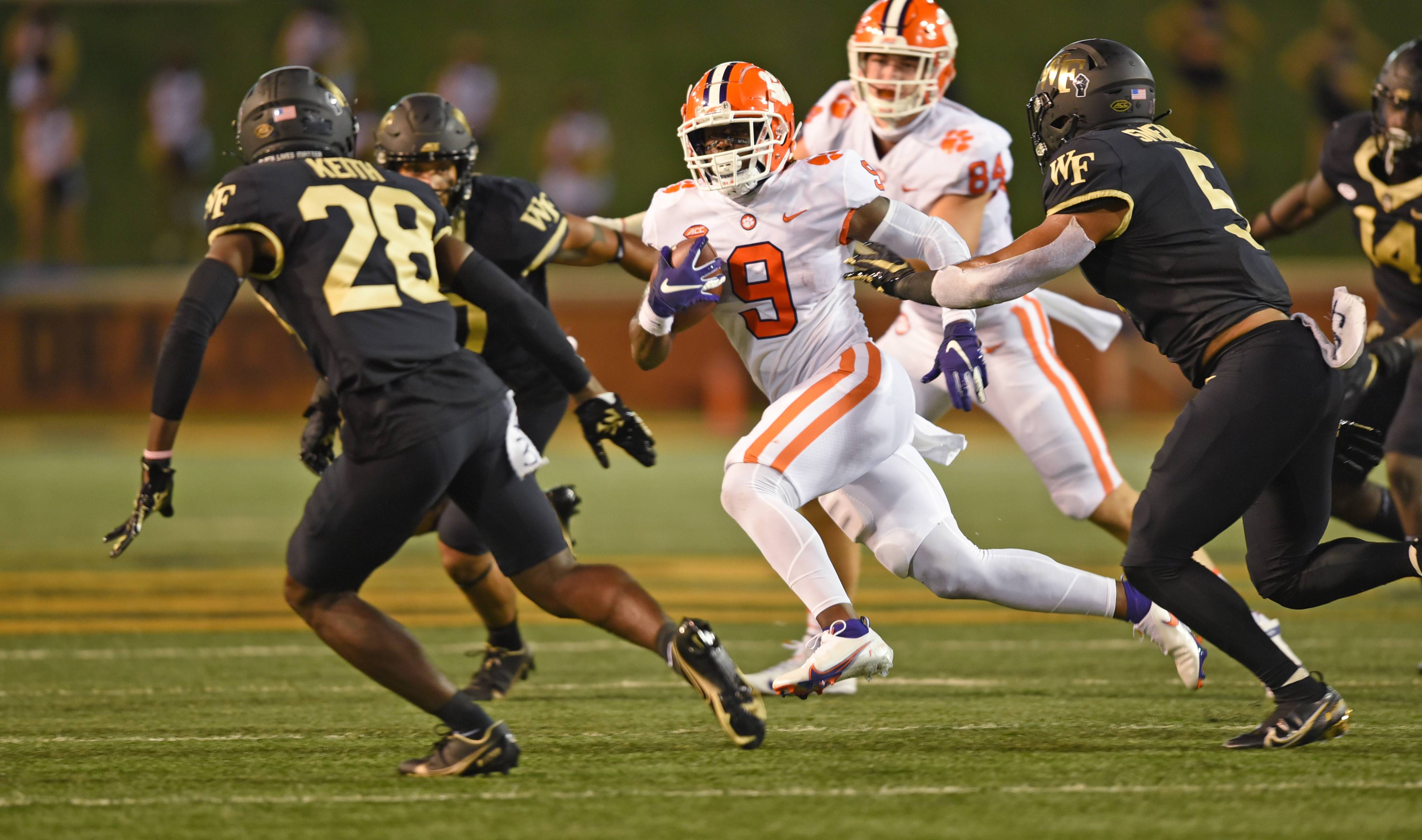 As for the Tigers’ other Heisman candidate and two-time reigning ACC Player of the Year Travis Etienne, it was another day at the office. In just one half of play, he rushed for 106 yards and a touchdown, averaging 6 yards per carry. He also had 3 catches for 47 yards. I thought he was robbed on the Tigers’ first touchdown drive when he leaped over the pile and reached the ball across the goal line. The replay showed that the ball clearly breached the plane of the goal line, but the officials didn’t stop for review, and Trevor ended up running it in himself on the next play. With sophomore running backs Chez Mellusi and Michel Dukes out, true freshmen Kobe Pace and Demarkcus Bowman (or "Thunder & Lightning 2.0) were able to get several reps and looked as good as advertised. They each averaged 3.7 yards on 6 carries, but you can see the nice combo of power and speed they possess.

As I predicted in my preview, Braden Galloway and the other tight ends played an enormous role in the passing game for the first time since Jordan Leggett in 2016. Galloway had 5 catches for 60 yards, sophomore Davis Allen had a catch for 42 yards and the veteran of the group, JC Chalk, caught a 12-yard touchdown in the corner of the end zone. The grandson of Dabo’s old coach Gene Stallings would have been the last of the 4 tight ends that anyone would guess to be the first to catch a touchdown this season! He has always been utilized more for his blocking than his receiving, although it wasn’t his first career TD. 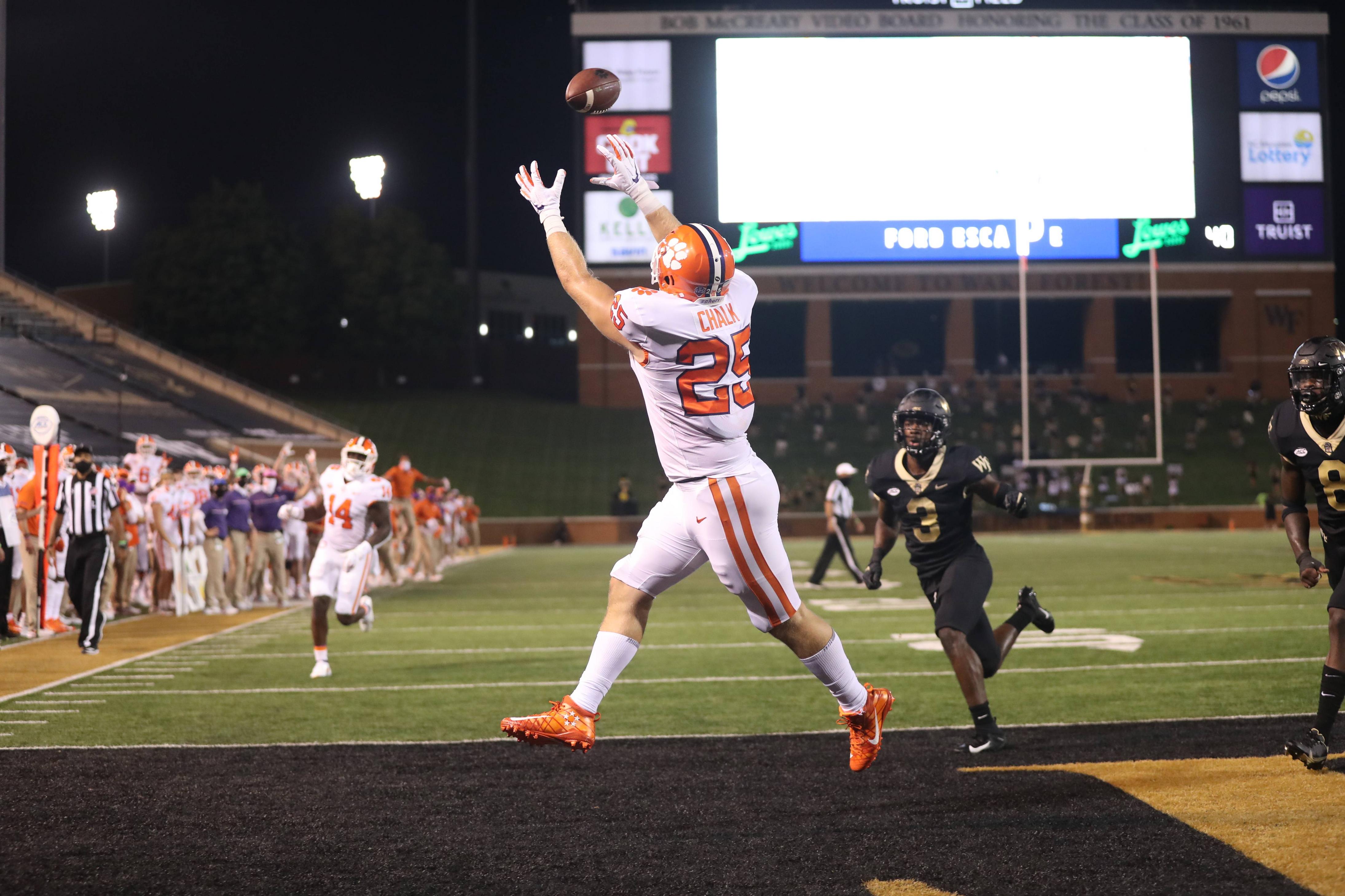 With no Tee Higgins or Justyn Ross in the passing game, it was senior Amari Rodgers and sophomore Joseph Ngata who stepped up at wide receiver. Rodgers had 5 catches for 90 yards despite the 40-yard touchdown drop. Ngata had 3 catches for 48 yards. Ladson had only one catch, but it went for 21 yards, and Powell added two grabs for 15. True freshmen EJ Williams and Ajou Ajou each made his first career catch, and redshirt freshman Brannon Spector—the new No.13—had a 16-yard reception. He also ran for 19 yards and almost scored on a reverse.

The Tigers’ starting group on defense was equally impressive. With Justin Foster out, true freshman Myles Murphy benefitted from more playing time and made the most of it, recording his first two career sacks! Fellow true freshman Bryan Bresee posted half a sack from his defensive tackle position, and those two are going to wreak havoc together for a long, long time! Fellow heralded freshman defensive lineman DeMonte Capehart did not make the trip. Winston-Salem native KJ Henry, Regan Upshaw, redshirt freshman LaVonta Bentley and Baylon Spector also contributed to the Tigers’ 6 sacks. Upshaw almost forced a fumble, recovered by Spector, but the officials overturned it as an incompletion. As a result, the Tigers did not come away with any turnovers, which was a little disappointing. The Tigers’ youth on the back end was exposed a little bit. CB Andrew Booth was beaten a couple of times, and Malcolm Greene committed a costly late hit out of bounds that resulted in Wake’s only touchdown. Actually, Wake shouldn’t have scored that TD in my opinion because freshman CB Fred Davis was the victim of a bad pass interference call on 4th and 14. But, again, it was valuable game experience for all of the Tigers’ younger players, and they will learn a lot from watching the film. As for the starters, it’s clear that this defense is going to be as dominant as I thought they would be—especially as they mature and they get DE’s Justin Foster and Xavier Thomas back, along with corners Derion Kendrick and Mario Goodrich! One last note on defense: starting DT Tyler Davis left the game with an undisclosed injury. Dabo did not know the extent of the injury after the game, and I will have an update on that for you Sunday night. Backup DT Etinosa Reuben, as I expected, did not make the trip because he is recovering from a wrist injury. He should be back in action soon. 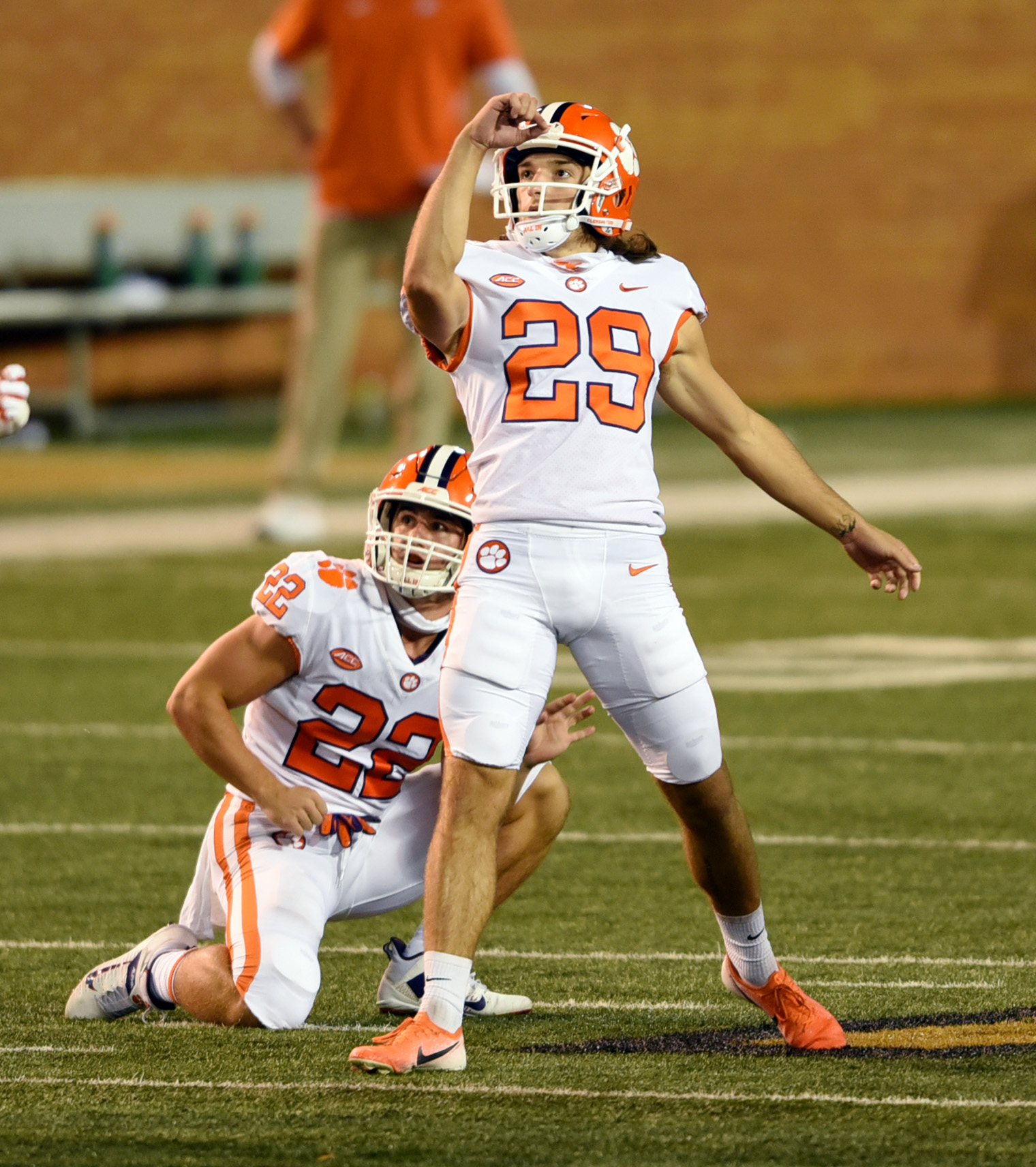 Finally, what a great season debut for BT Potter! Dabo told us that he had been remarkably accurate throughout spring and August camp, and he exhibited that on Saturday night, going 3-3 with a career-long-tying 52-yarder that would have been good from 65! He has always been a weapon on kickoffs with his tremendous touchback rate, but it looks like he will be a weapon on field goals this season as well. 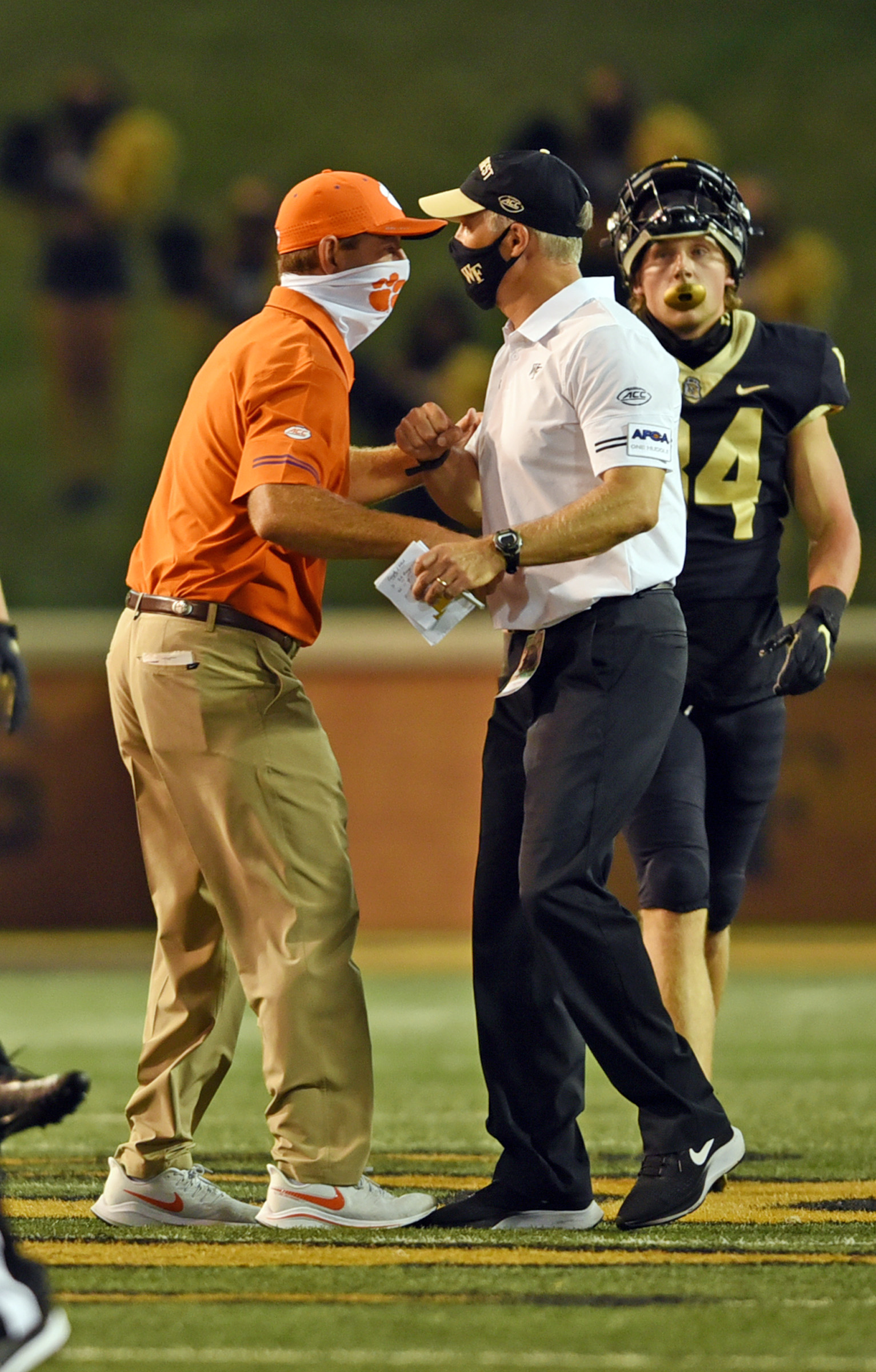 I’m sure Dabo feels better about having this game behind him than any other of his 12 season openers, of which he has won 11, losing only at top-10 UGA in 2014. The Tigers have won 23 straight games against ACC competition and extend their nation-long Saturday game win streak to 43 straight. That trails only 1950’s Oklahoma all-time! The Tigers will look toward their home opener against The Citadel next Saturday in Death Valley, and I’m sure they’ve never looked more forward to getting in front of 19,000 fans. Be sure to check back on Sunday evening for our Zoom conference call with Dabo and an update on Tyler Davis. Click on the link below for highlights and all of our post-game interviews!