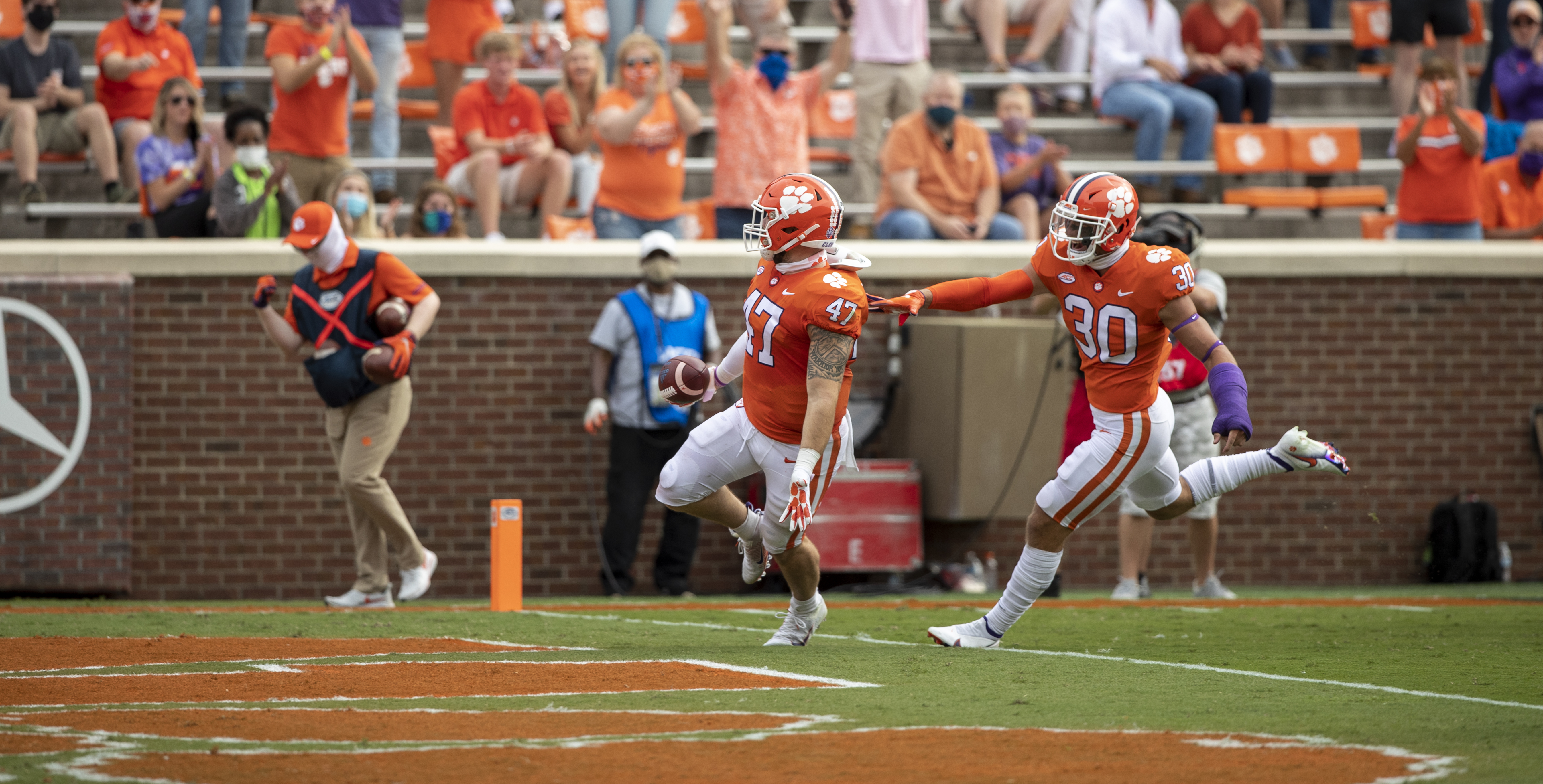 
TREVOR LAWRENCE SPECTACULAR; NO.1 CLEMSON COLLECTS FIRST SHUTOUT IN 4 YEARS, 49-0 OVER THE CITADEL

CLEMSON, SC - Not only was it the home opener for the Tigers on Saturday, but it was Death Valley's 78th birthday, and the Tigers roared to a 49-0 halftime lead over The Citadel, scoring touchdowns on each of their first six possessions plus a defensive TD. The game was so lopsided that late in the second quarter, the Tigers had out-gained the Bulldogs 293 to 3 despite having already played several backups on both sides of the ball! Trevor Lawrence played barely over a half in the opener last week and less than a half in the home opener on Saturday, but he's showing why he was the preseason Heisman favorite. Trevor was a model of efficiency against The Citadel, going 8-9 for 168 yards and 4 total touchdowns with no interceptions. And remember, that's in less than a half! He is completely in the zone right now, dropping dimes all over the field and more accurate than he has been in his entire stellar career. Dabo pointed out to me after the game that he could have been 25-28 last week with 400 yards and another touchdown if it hadn't been for a few drops. And that was in just over a half of play! One of Trevor's 4 touchdowns was with his legs, as he drove his way through the middle of the defense on 3rd and goal for his 3rd rushing TD of the season. He has thrown 276 passes without an interception, the third-longest streak in ACC history, and has thrown 26 touchdowns over that stretch. 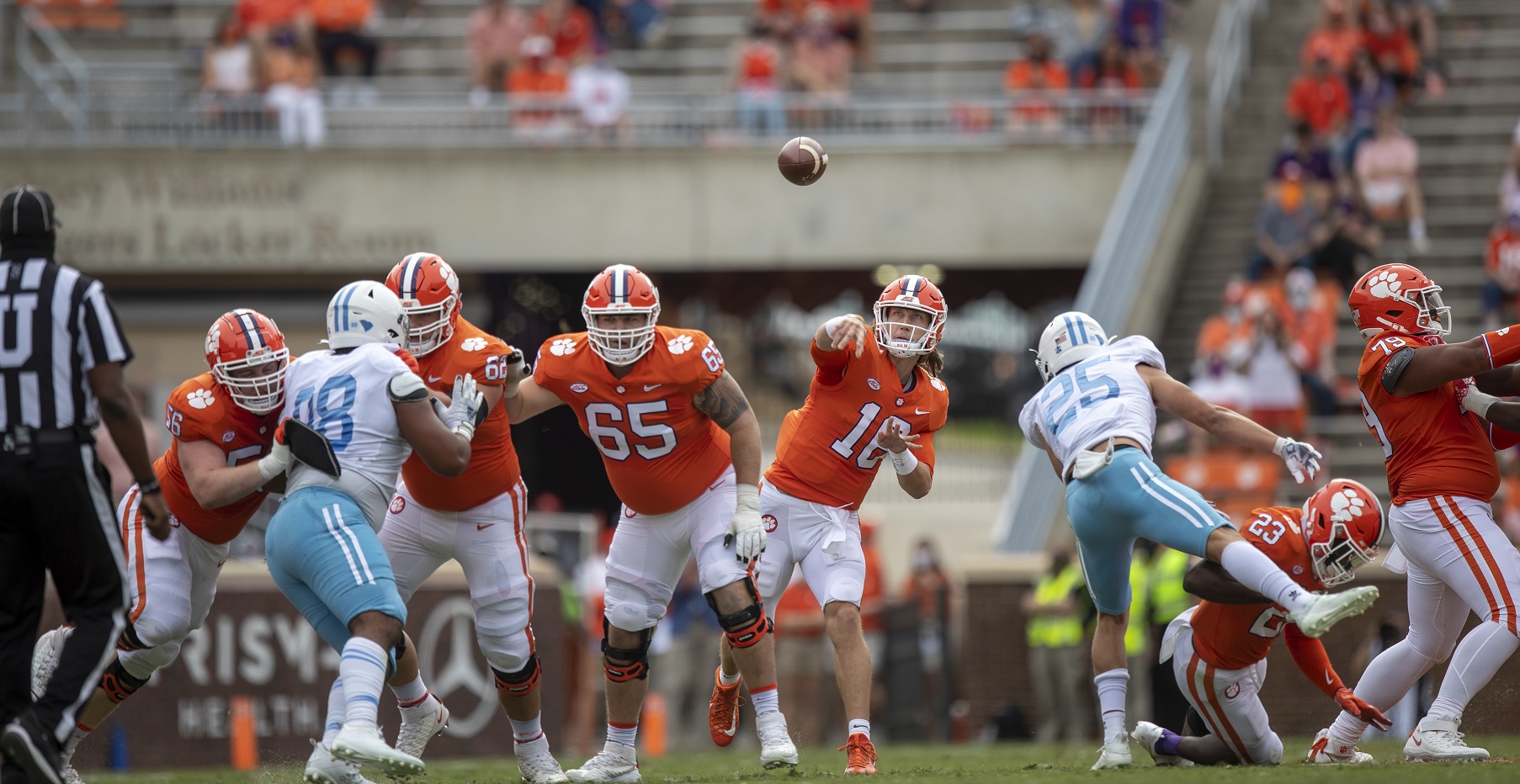 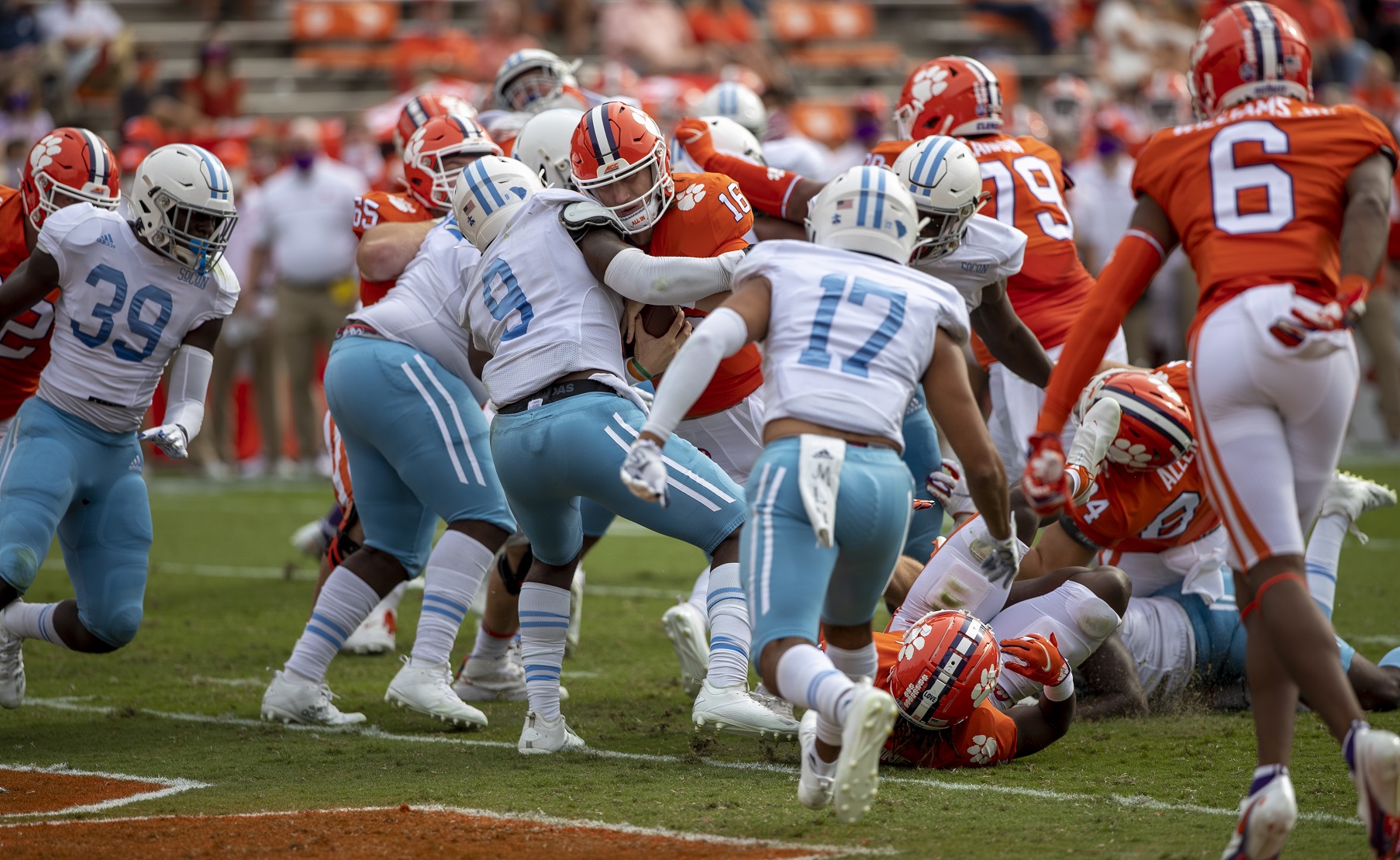 Two of Trevor's TD passes were to sophomore Frank Ladson, who finished the game with 3 catches for 87 yards. The first TD was a brilliant throw and catch in tight coverage. It looked like the DB might get a hand on the ball, but Ladson showed great concentration in making the catch. The second was a beautiful 54-yard bomb that Trevor dropped right into Ladson's hands in stride. Amari Rodgers added the other TD on a 44-yard dime by Trevor to the back of the end zone, which was great to see after Amari dropped the 40-yard touchdown last week. Surprisingly, Joseph Ngata did not record a catch on Saturday. However, he didn't play the whole game either. True freshman EJ Williams was the second-leading receiver with 3 catches for 58 yards. 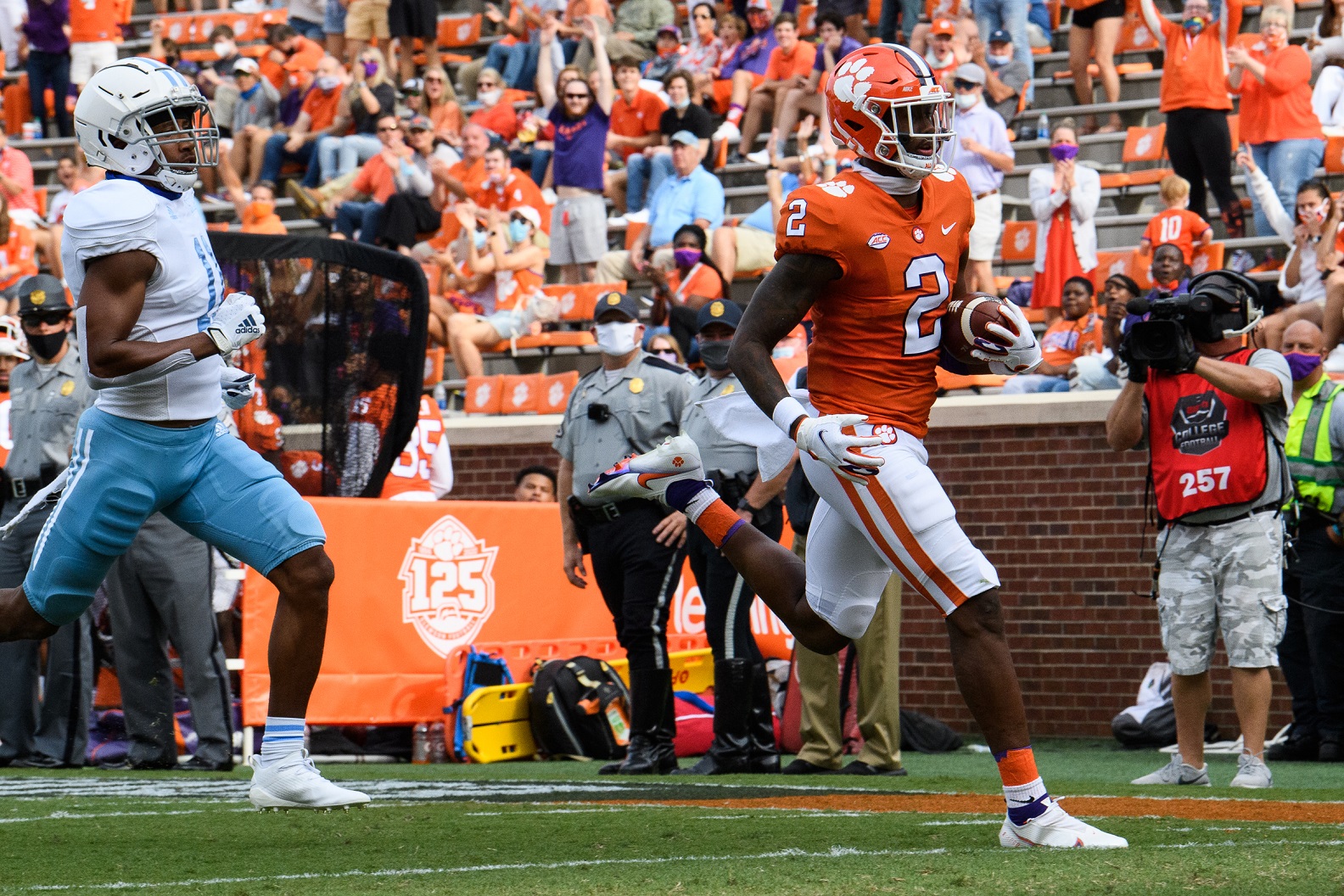 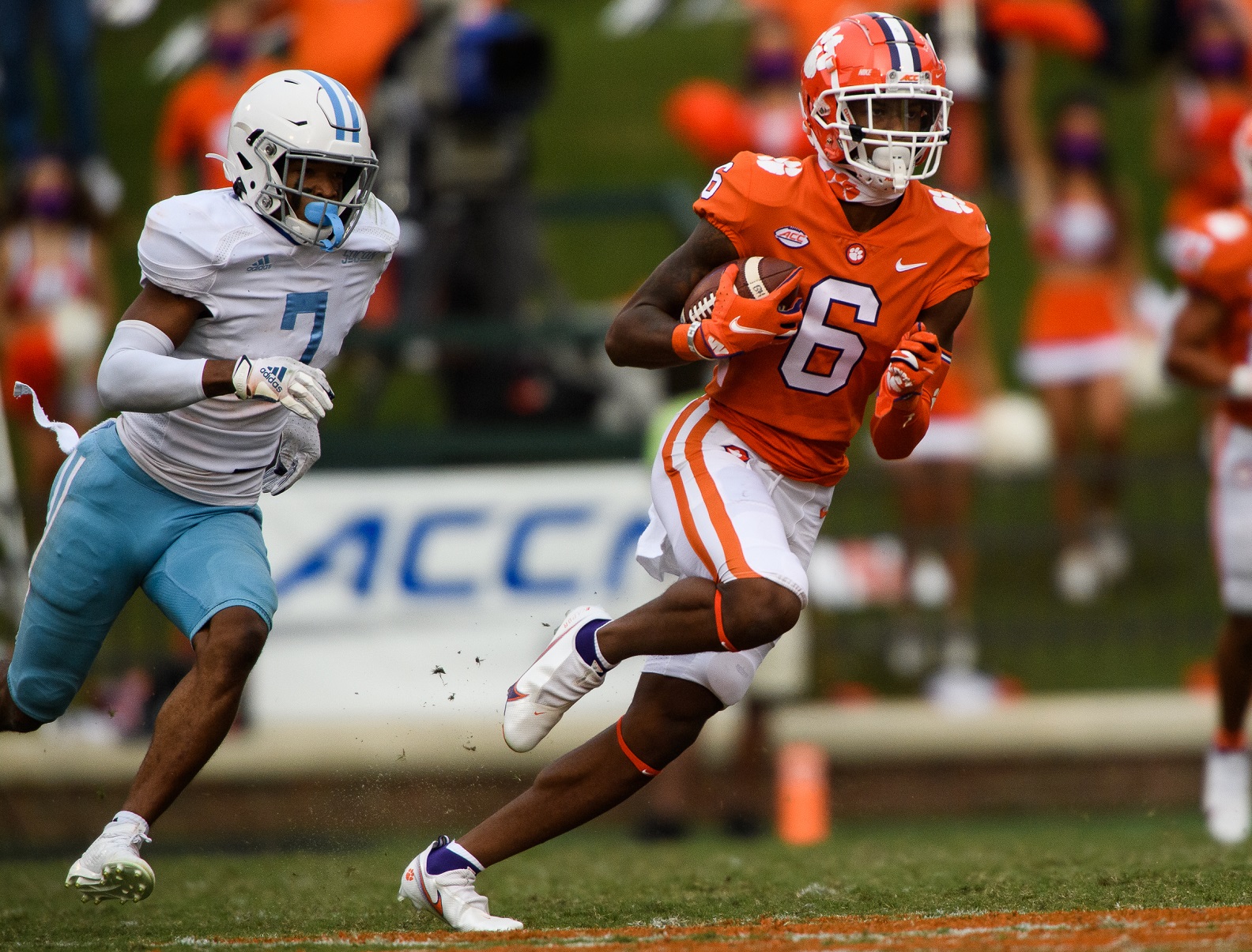 Travis Etienne will have to wait another week to break Tim Tebow's all-time record for most games with a TD. He played less than a half with only 68 rushing yards but averaged 8.5 yards per carry, and he added a catch and a 44-yard punt return for 123 all-purpose yards. The punt return set the Tigers up at the 5-yard line for DJ Uiagalelei's first career touchdown. He barreled through the teeth of the defense twice for touchdowns, giving Clemson quarterbacks 5 rushing TD's in the first 2 games. DJ was 8-11 for 75 yards passing and clearly established himself as the backup QB, ahead of redshirt freshman Taisun Phommachanh. 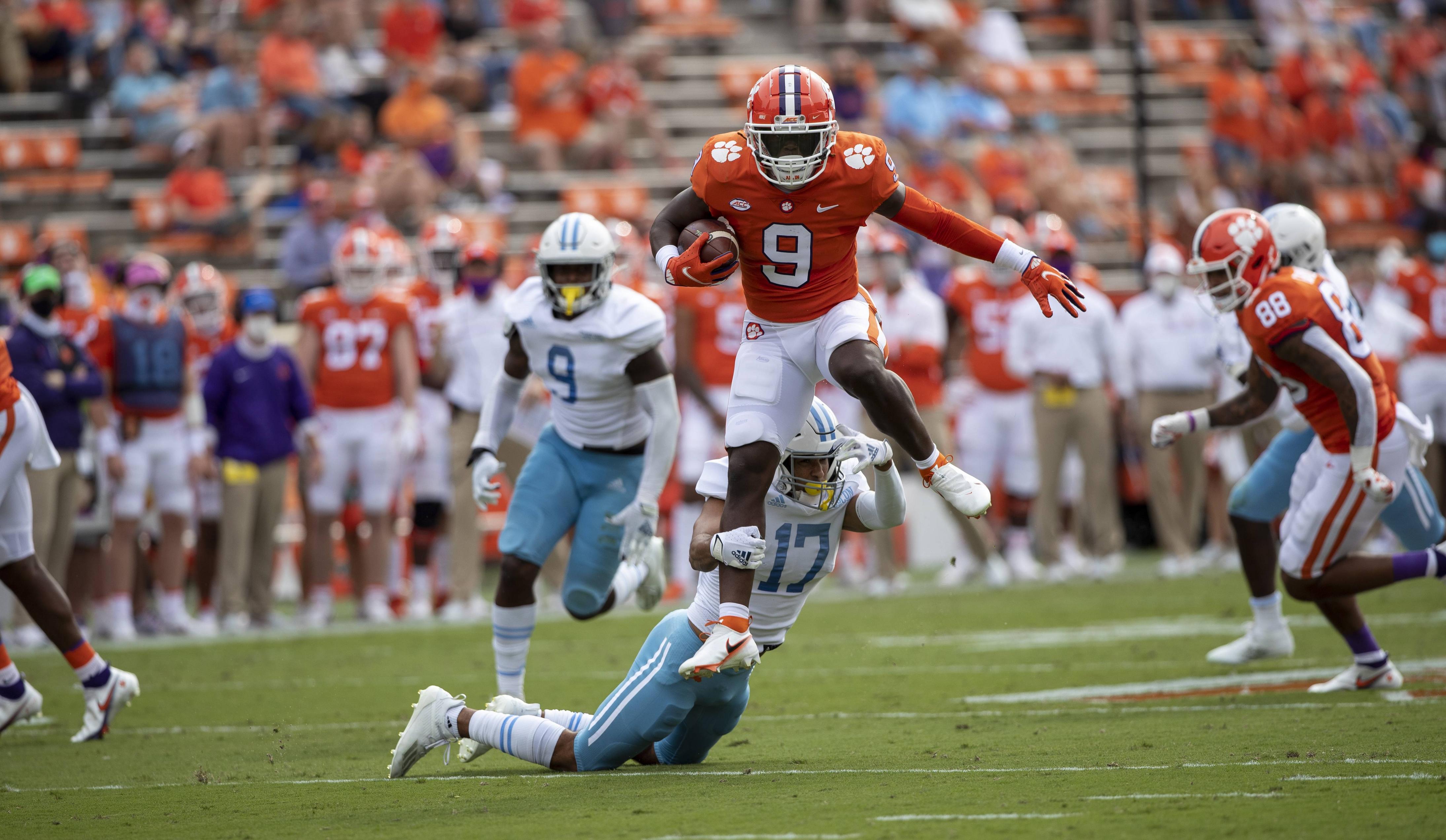 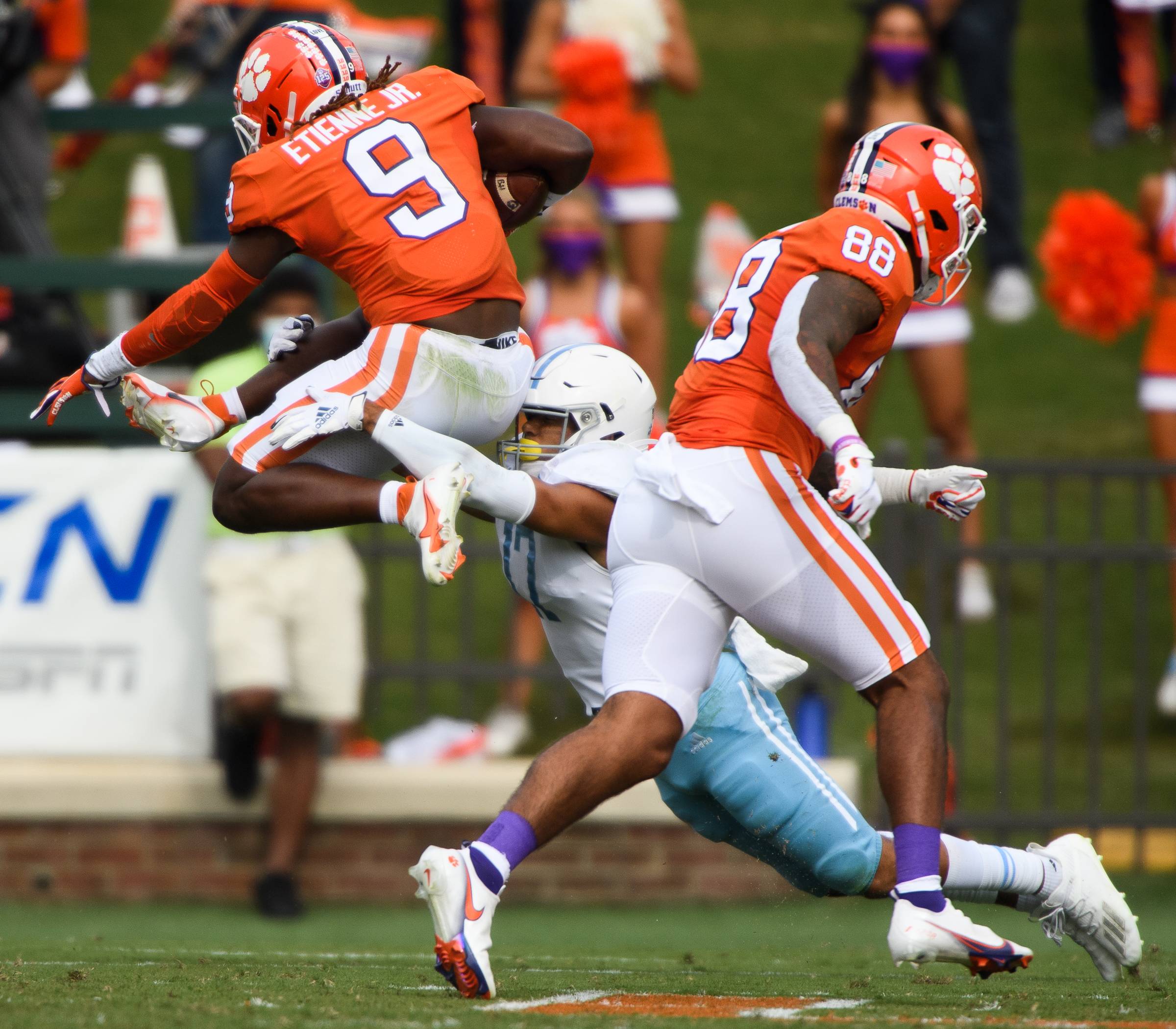 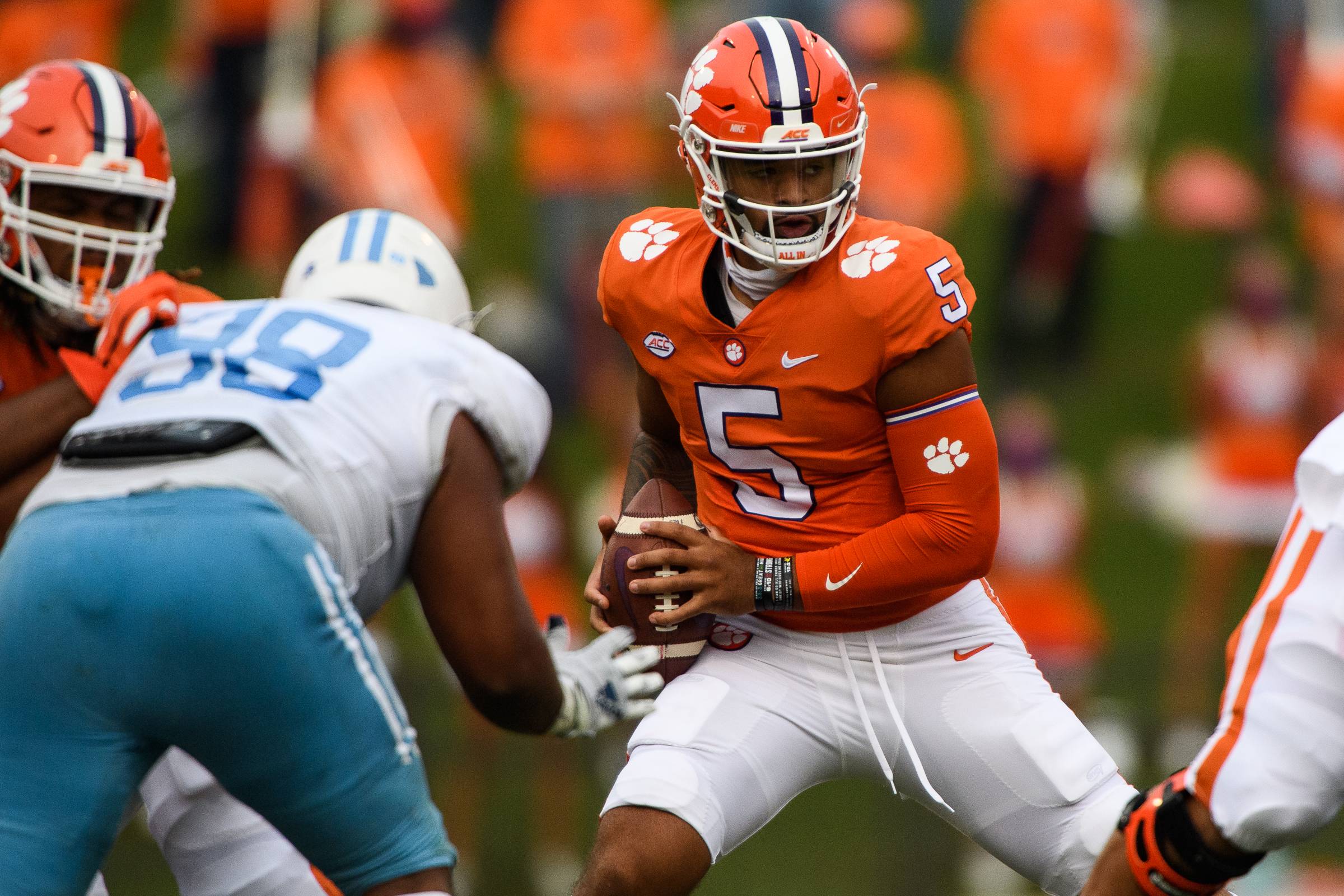 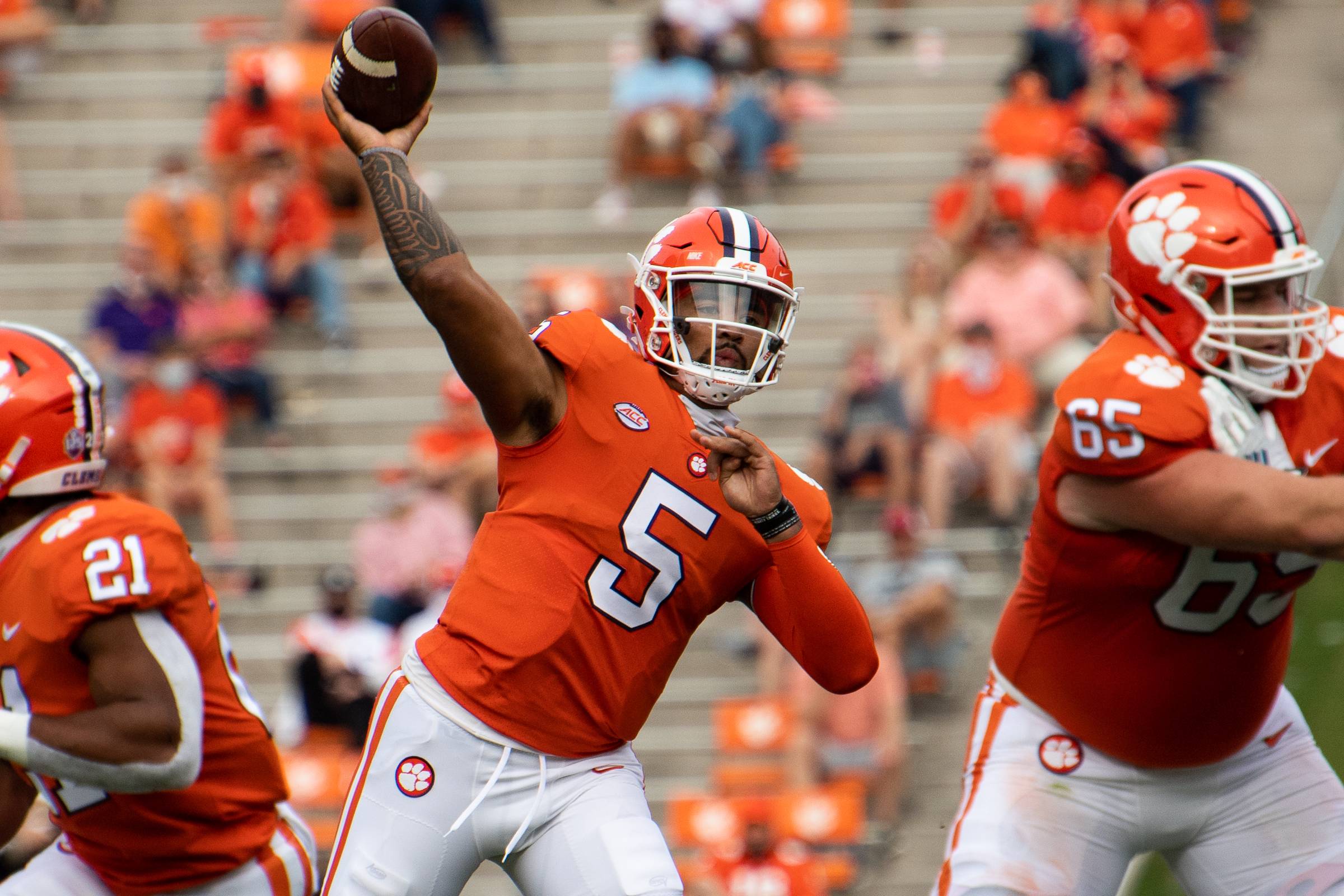 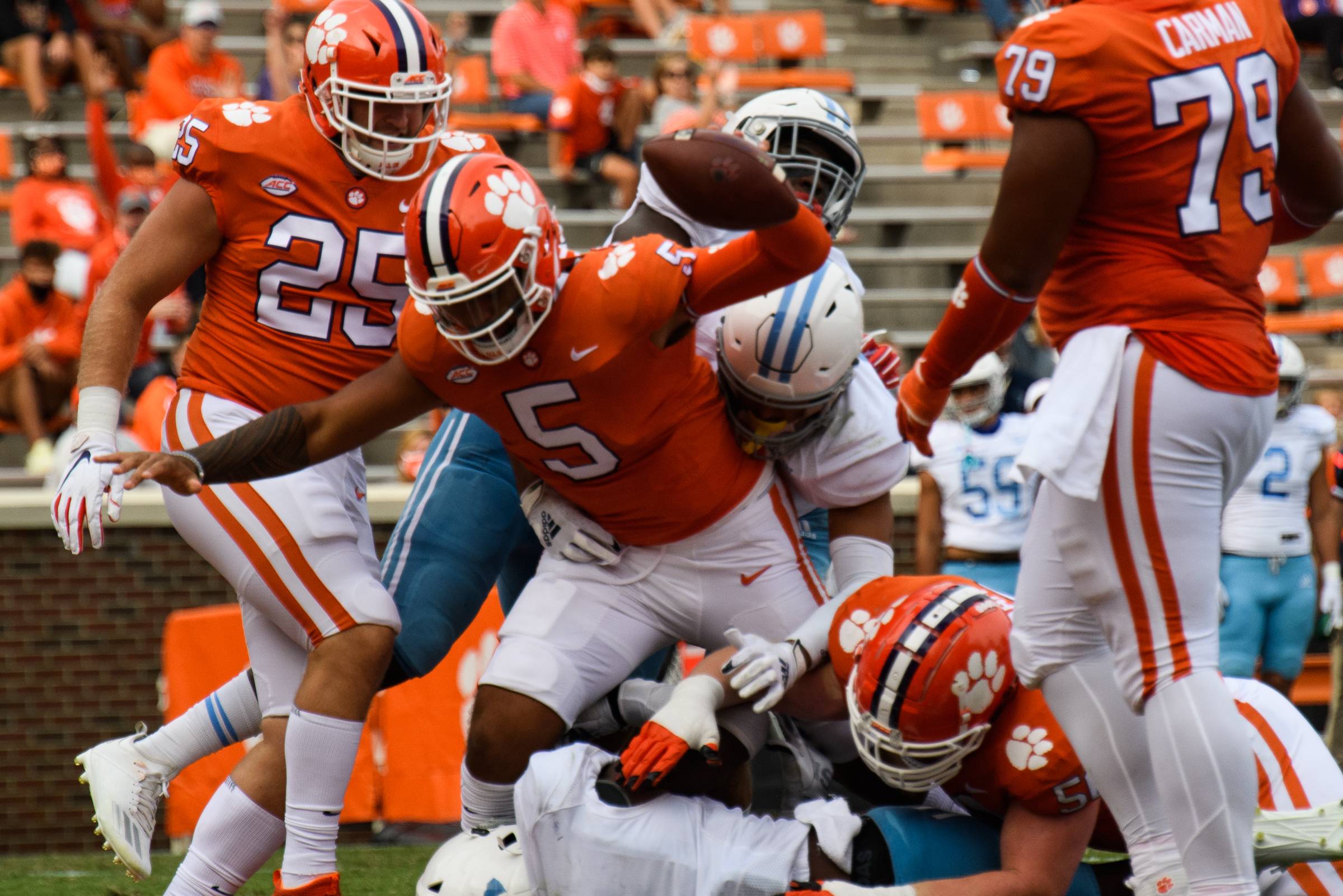 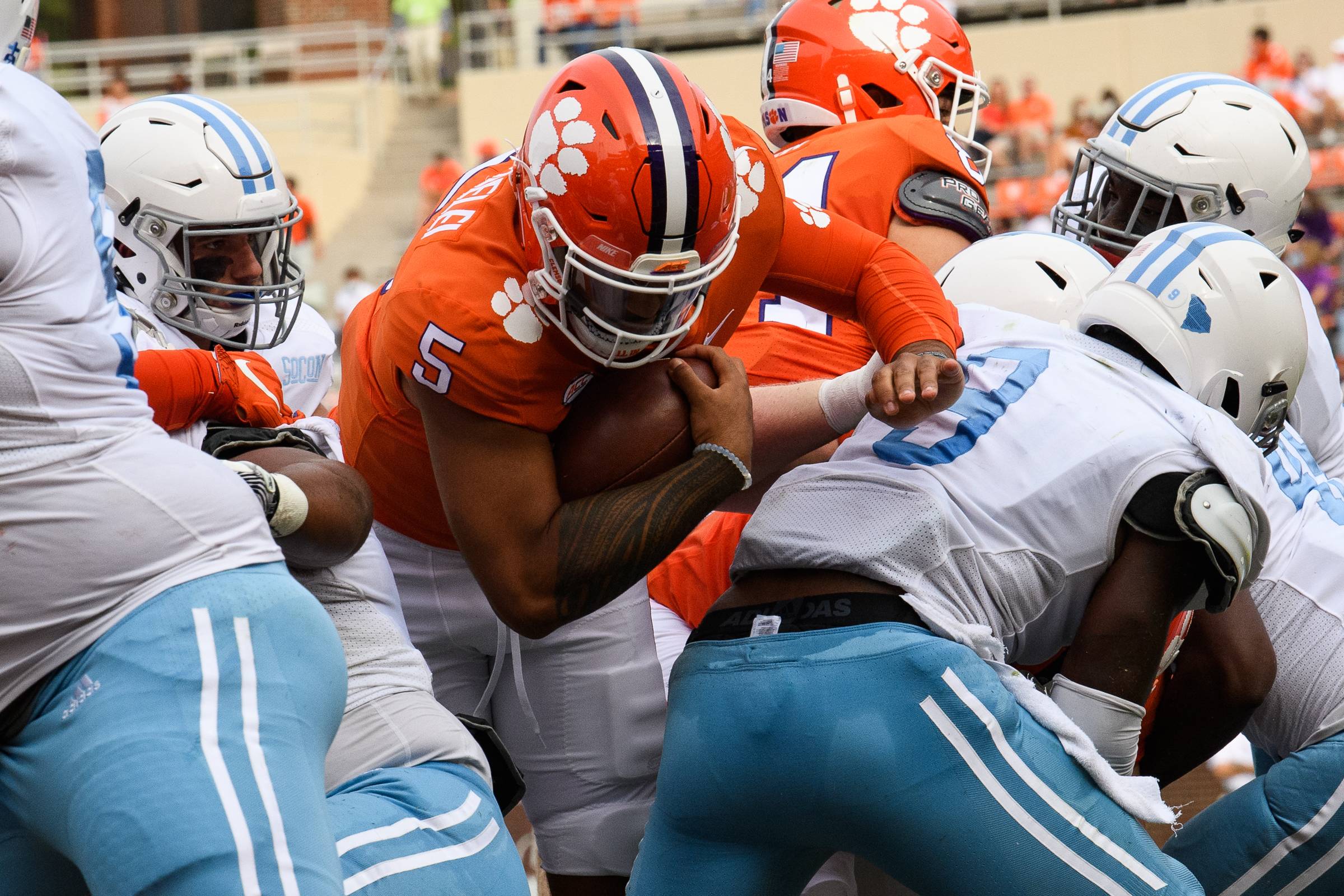 Perhaps the biggest story of the day was that the Clemson defense pitched a shutout for the first time since their 31-0 win over Ohio State in the CFP nearly 4 years ago, and this has been the best defense in the nation over that period of time, so it demonstrates how hard it is to shut anyone out. The Tigers actually pitched 3 shutouts in 2016 and came close several times since, but they finally blanked an opponent again on Saturday. Last week, the backups gave up 13 points to Wake, including a late TD aided by a pass interference call on 4th and 14. This week, the backups were much more impressive. The defense was faced with a few sudden change situations after a fumble and a couple turnovers on downs, but they answered the challenge each time. They also created their first turnover of the season, a fumble forced by freshman phenom Myles Murphy that James Skalski scooped and scored for the first defensive touchdown of the season. Baylon Spector left the game in the first half with what looked like a possible concussion, and Dabo told me after the game his status was unknown. The Tigers were also without starting DE Justin Foster, starting DT Tyler Davis, co-starting CB Marion Goodrich and co-starting CB LeAnthony Williams, but they didn't miss a beat. True freshman Bryan Bresee continued to wreak havoc, and several freshman contributed to the Tigers' 4 sacks, including Capehart, Swint, Simpson and Greg Williams. Regan Upshaw added half a sack after recording his first sack last week. The Tigers had an impressive 6 sacks in the opener last week, and 4 against a triple-option is equally impressive! They also had 12 tackles-for-loss on Saturday and 7 three-and-outs. 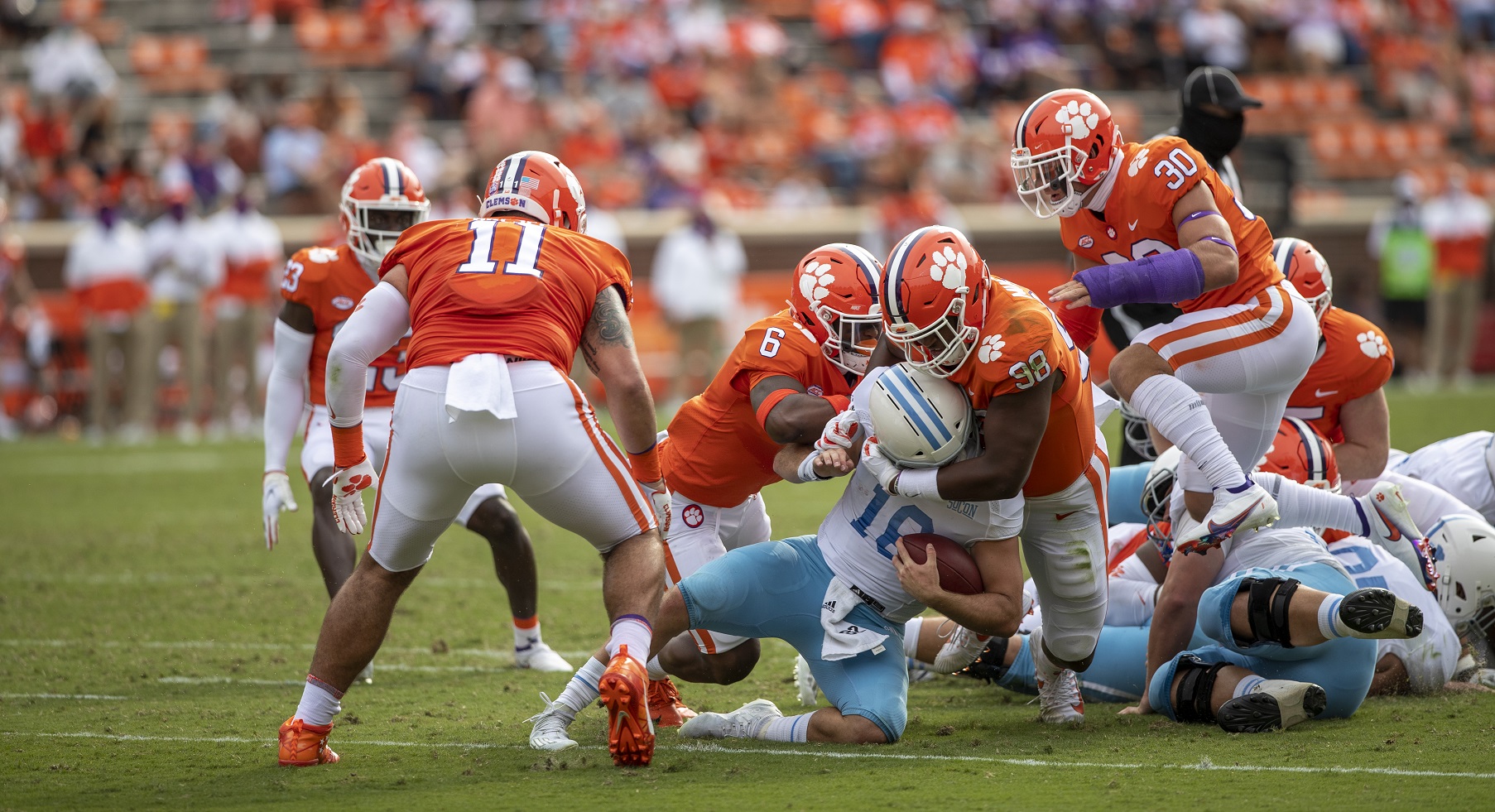 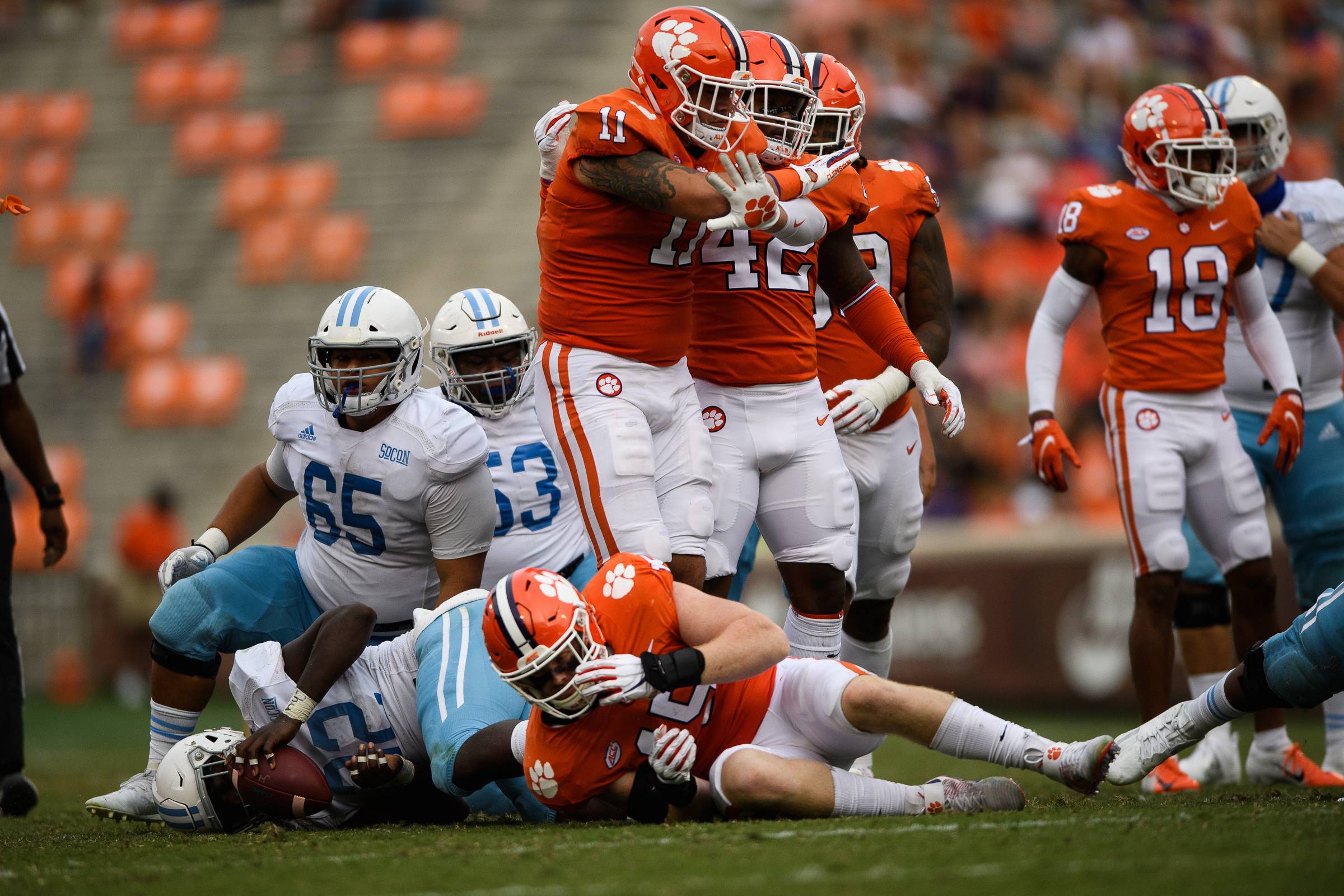 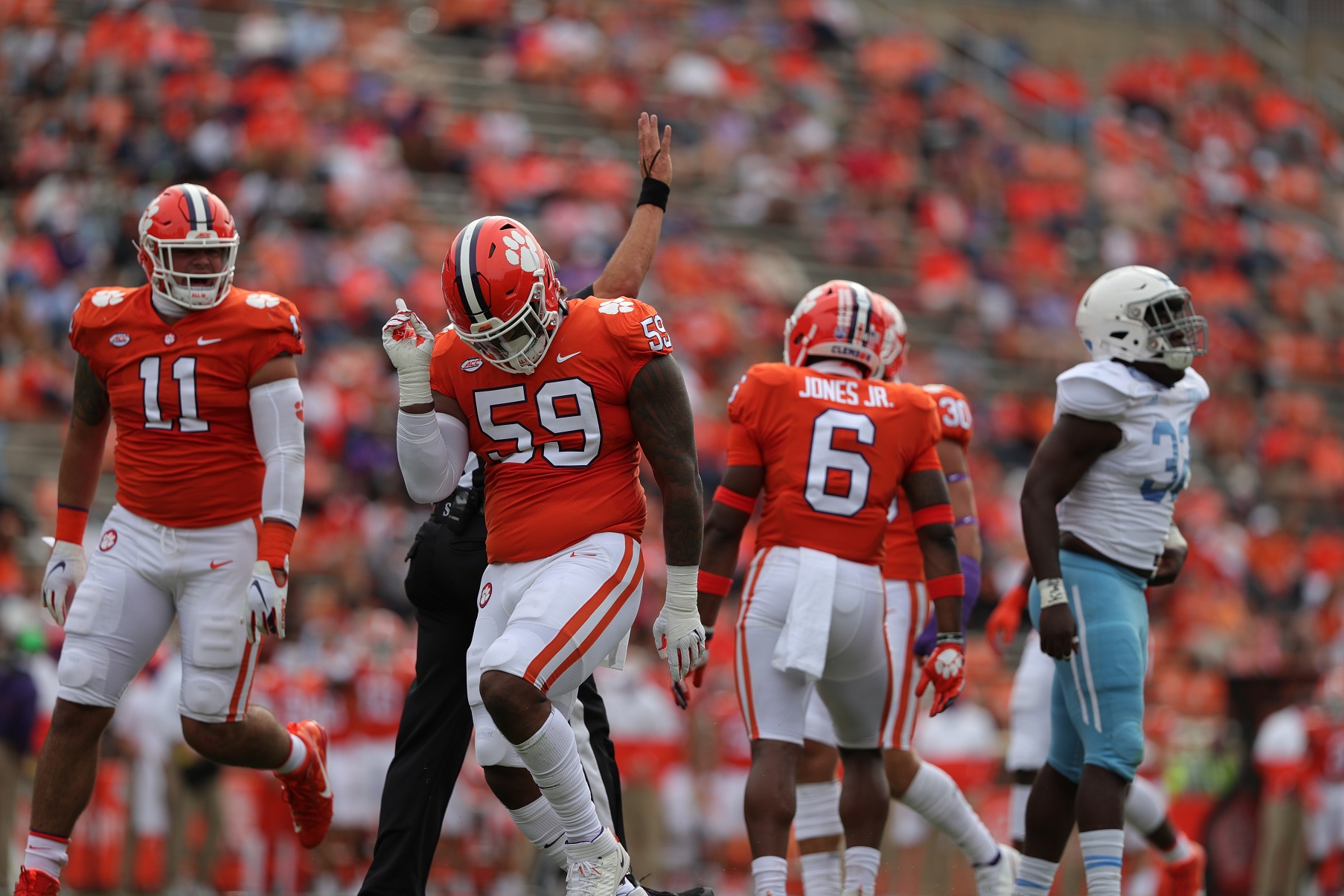 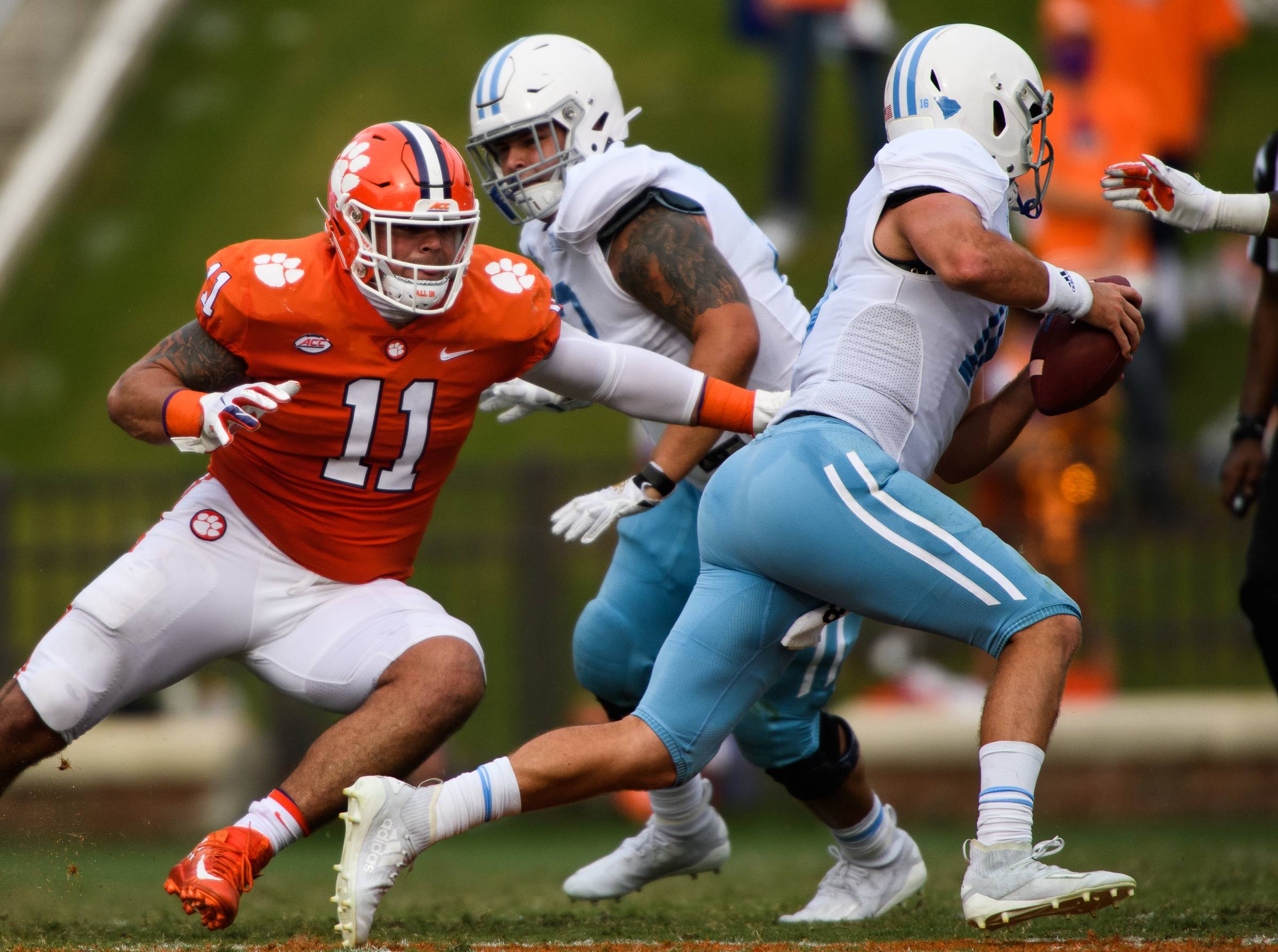 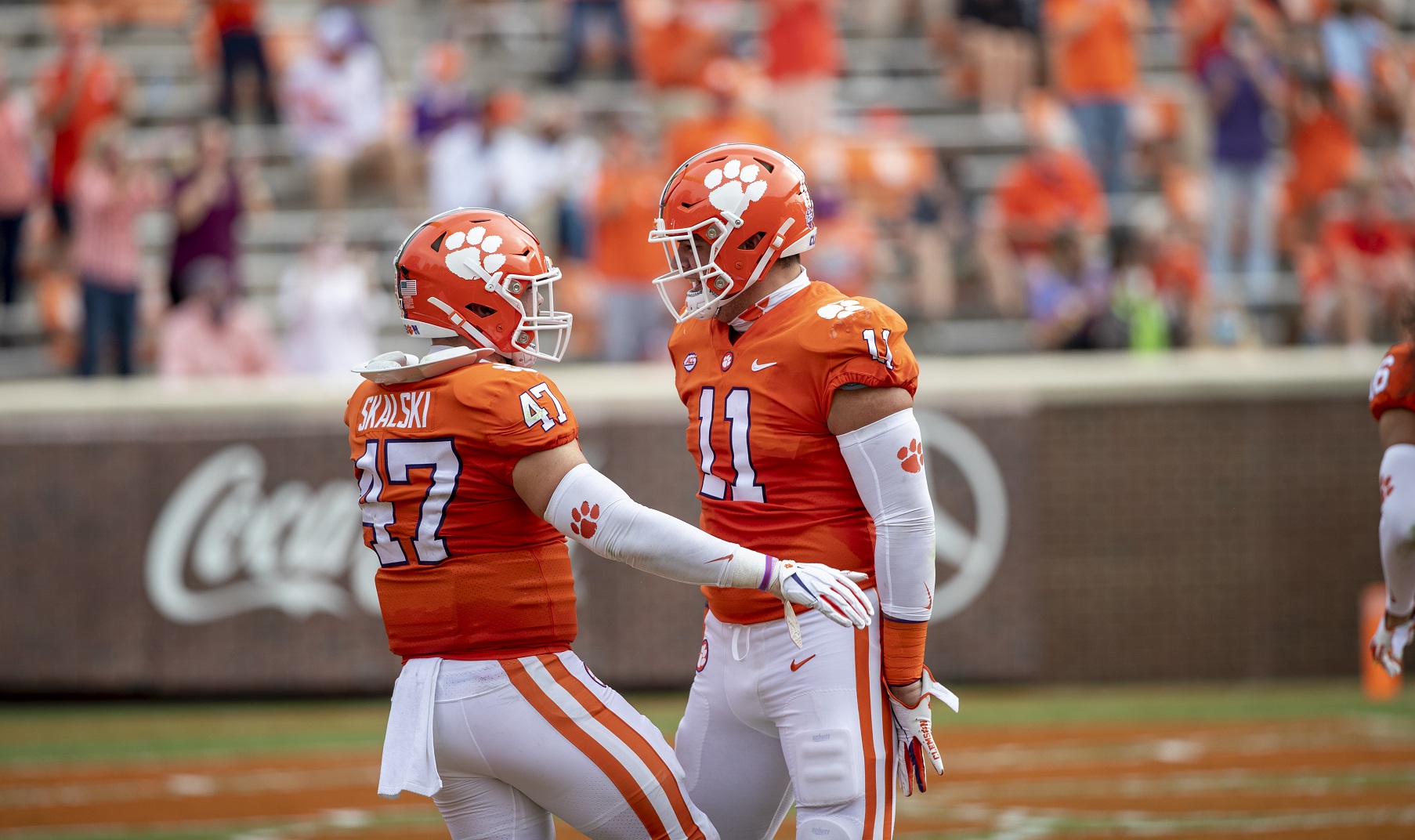 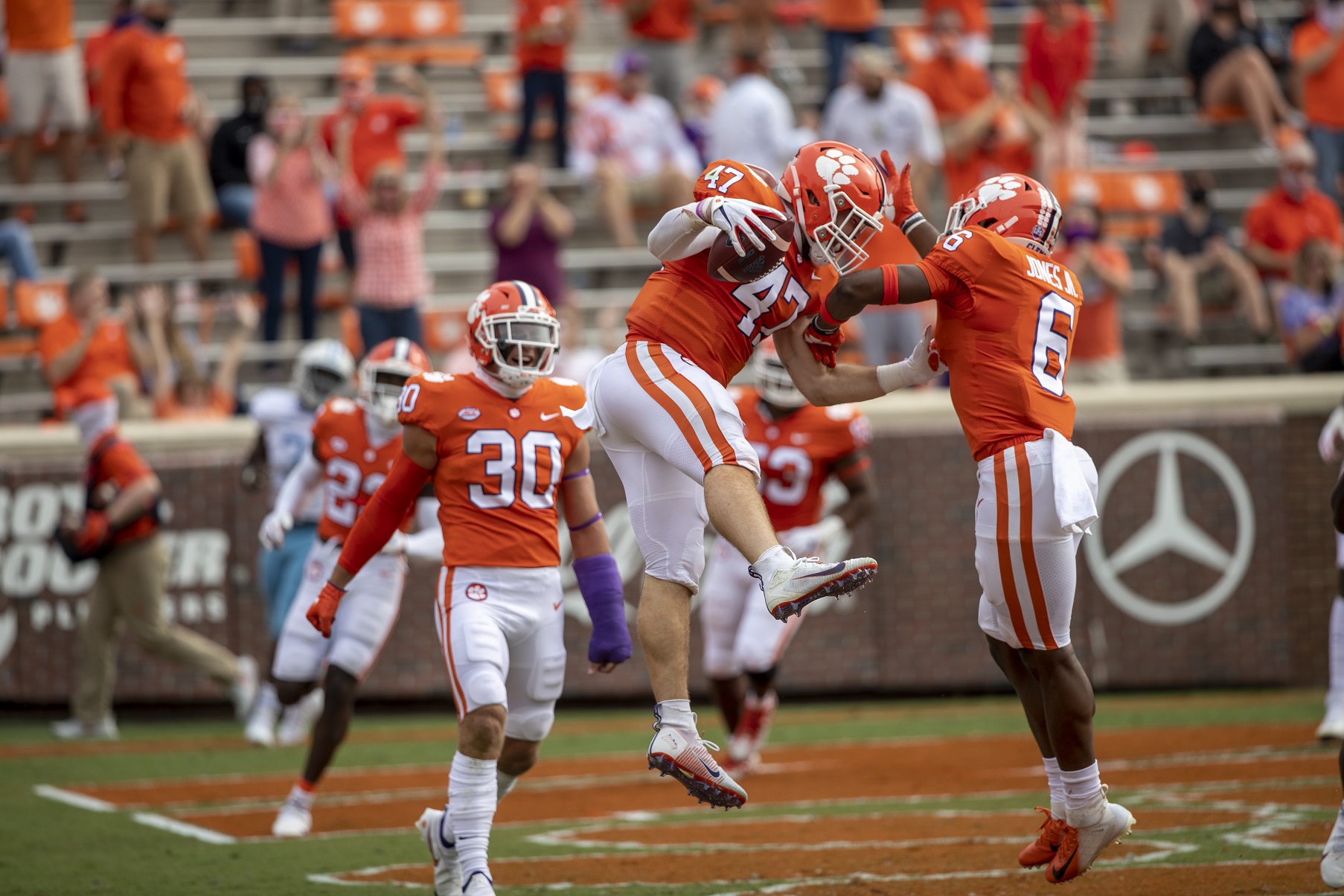 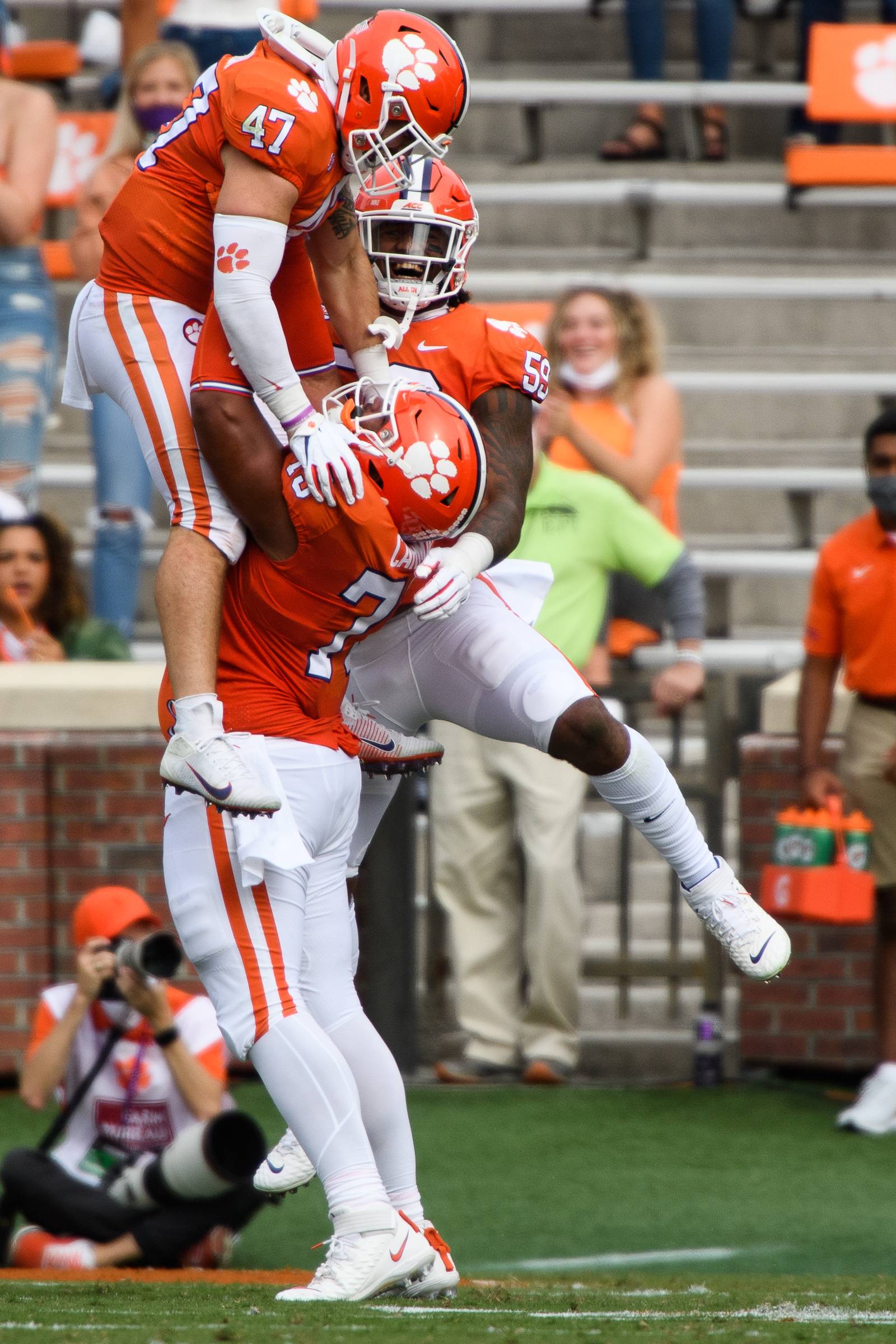 The Tigers are now 71-5 since the start of 2015, the best record over that span all-time. They set a new ACC record with their 31st straight regular season win, pulling away from 2013-15 FSU. It was also their 45th straight Saturday win, which I believe ties the all-time record held by Oklahoma from 1953-57, but I'll have to check with the Clemson folks to get confirmation on that. Incidentally, that was Oklahoma's fabled 47-game win streak under Bud Wilkinson, who is the only man other than Dabo to win a national title as both a player and head coach!
The Tigers will enjoy a timely bye next week with several players either sick or injured and return to ACC play in October against UVA in Death Valley for a rematch of last season's ACC Championship. I'll have an update on Spector when we talk to Dabo on Monday evening. Post-game interviews, notes and highlights are below! 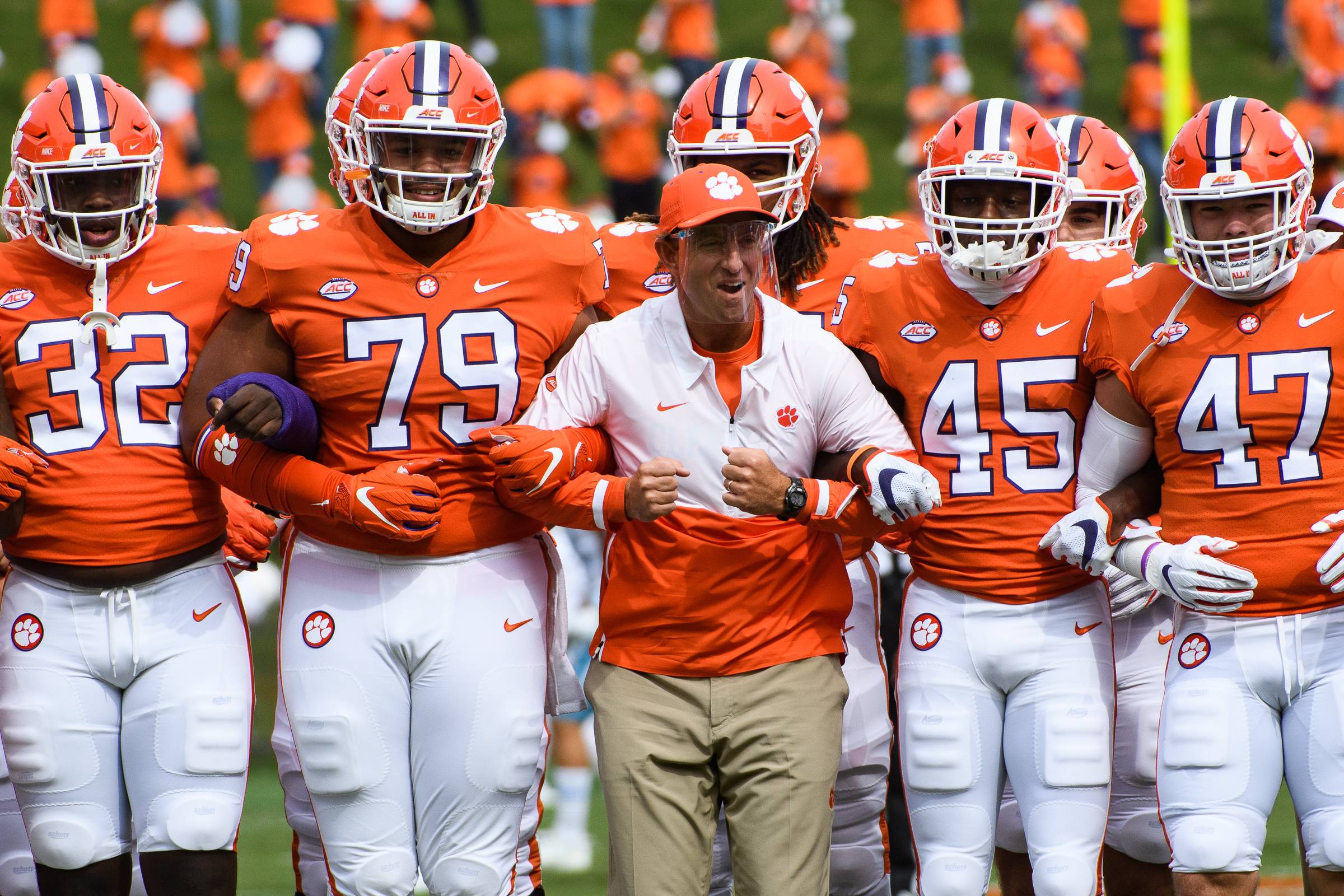 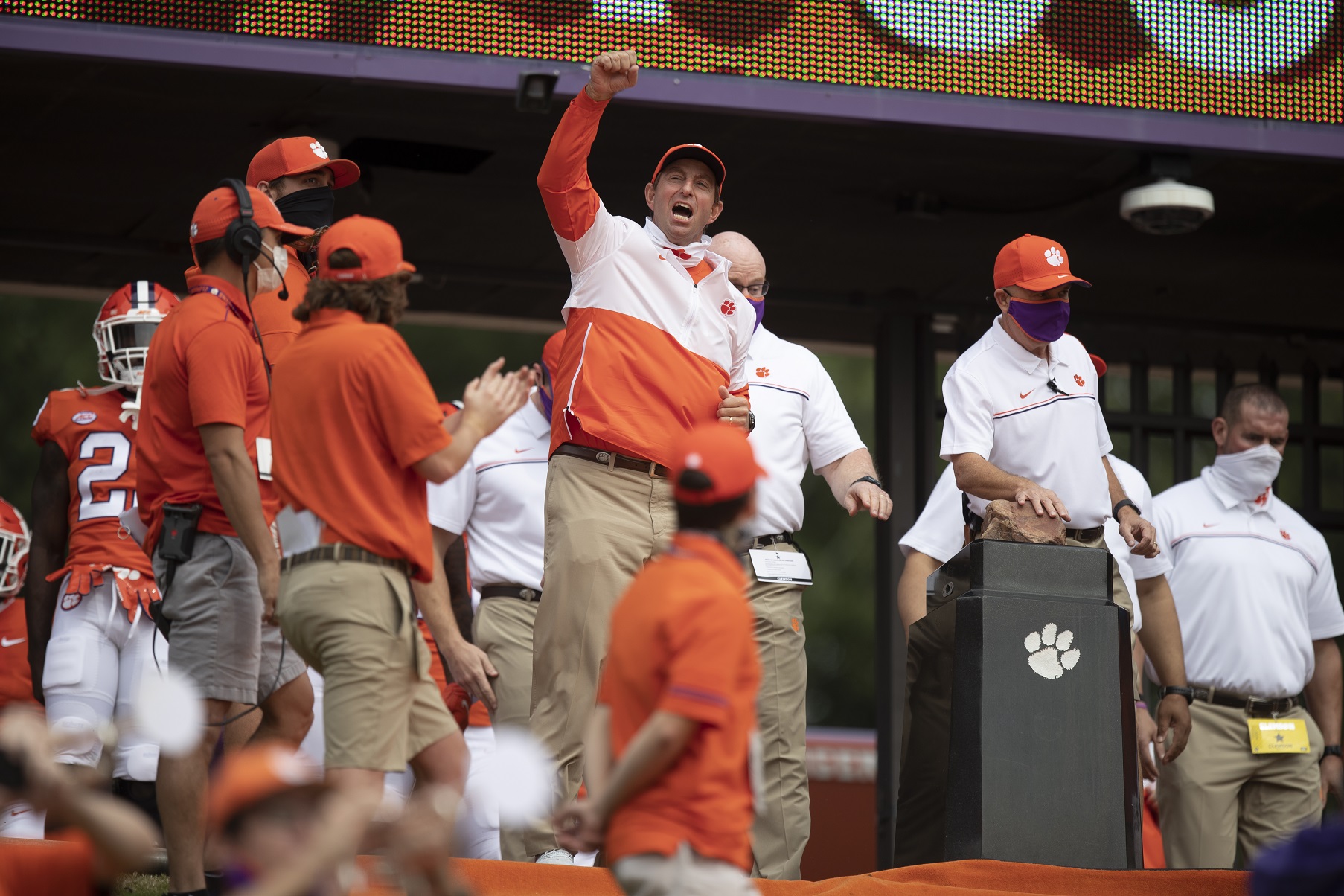 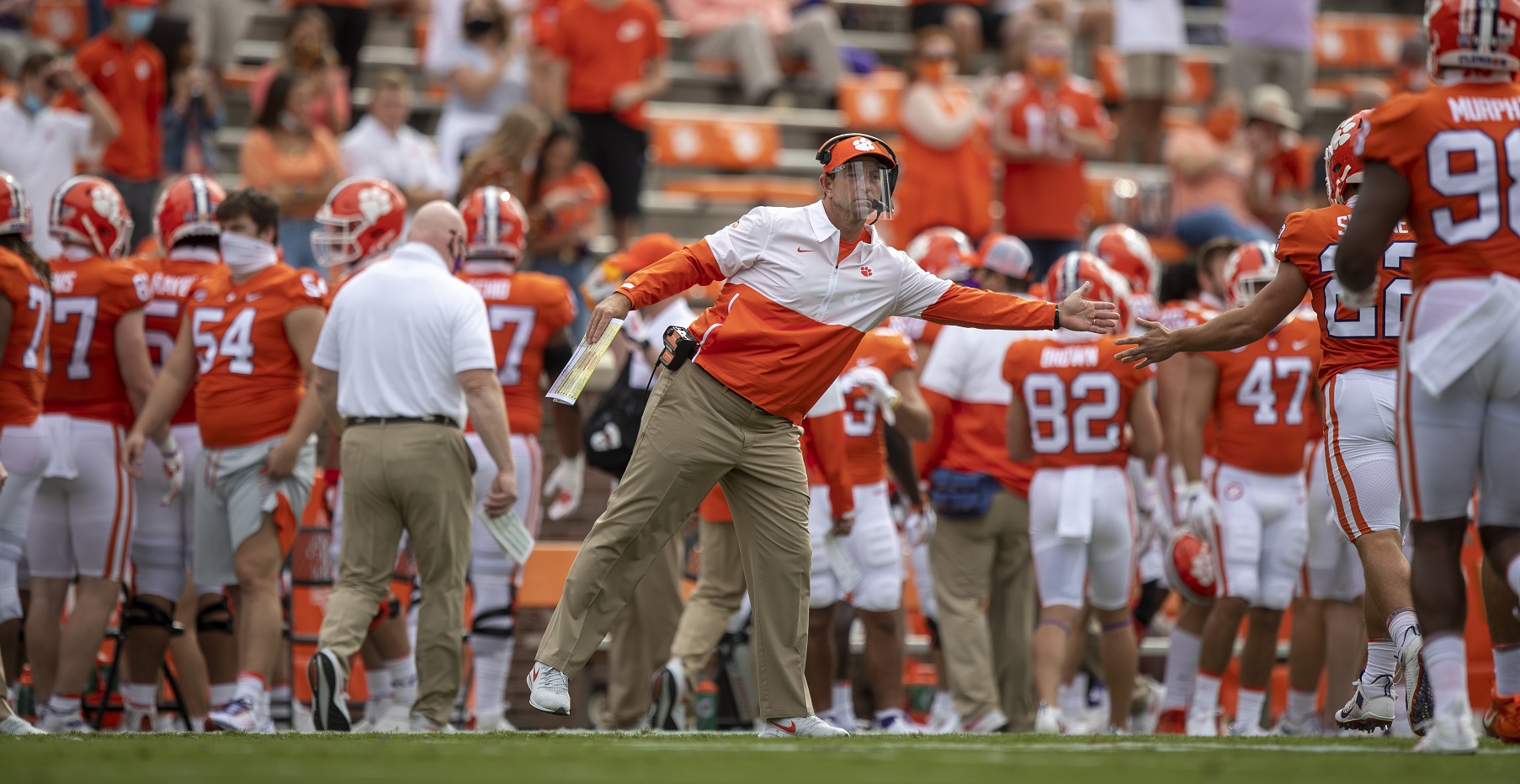 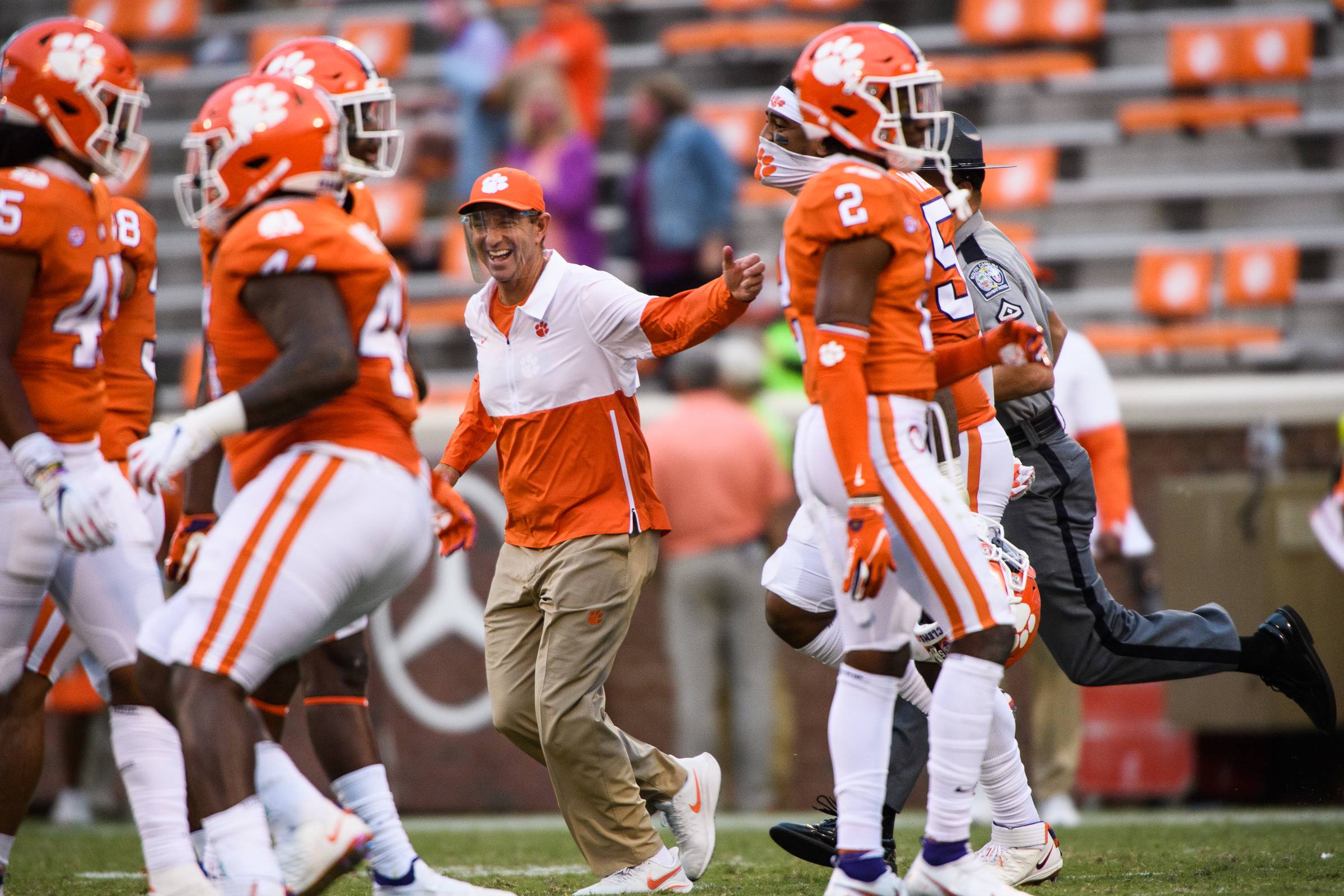 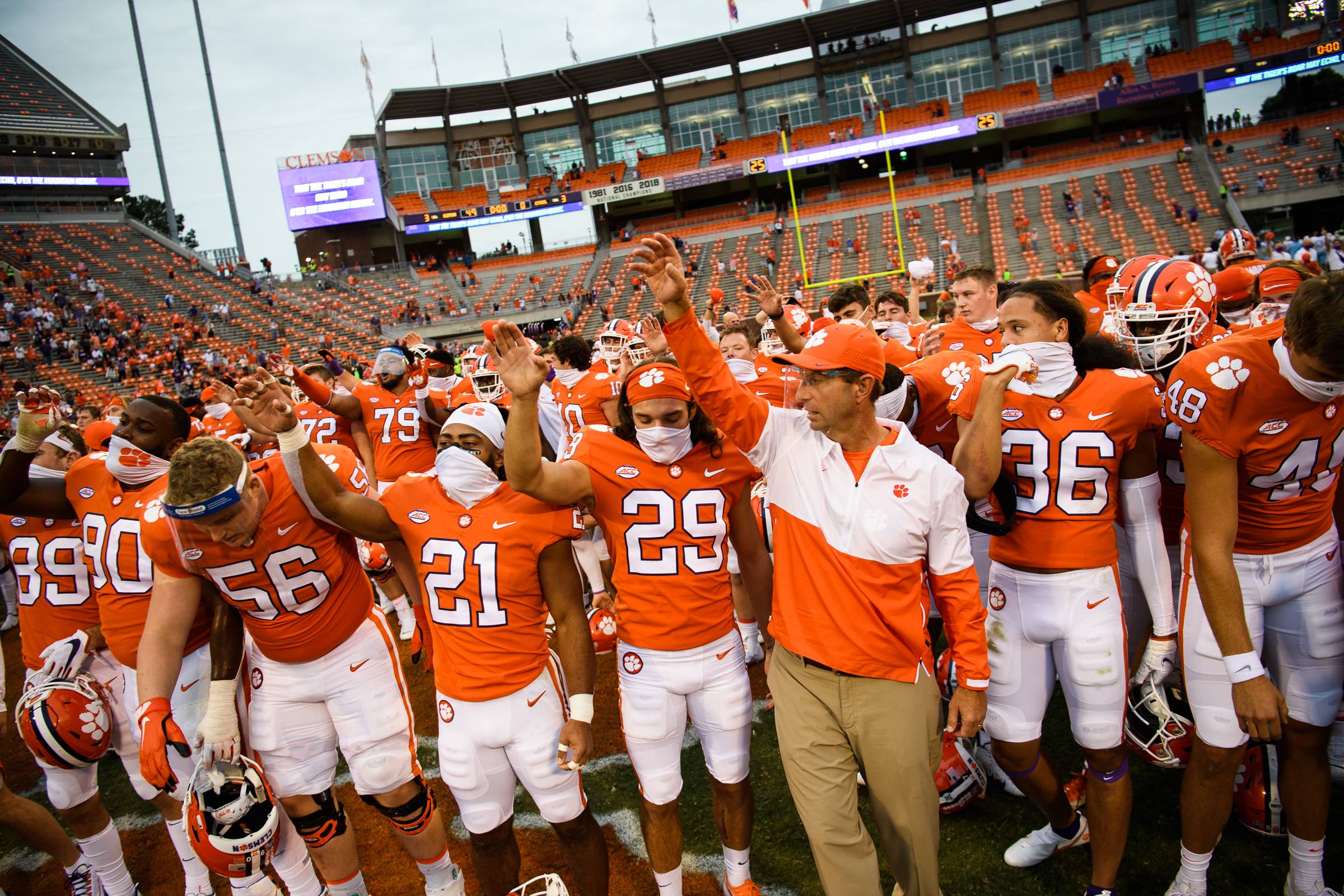 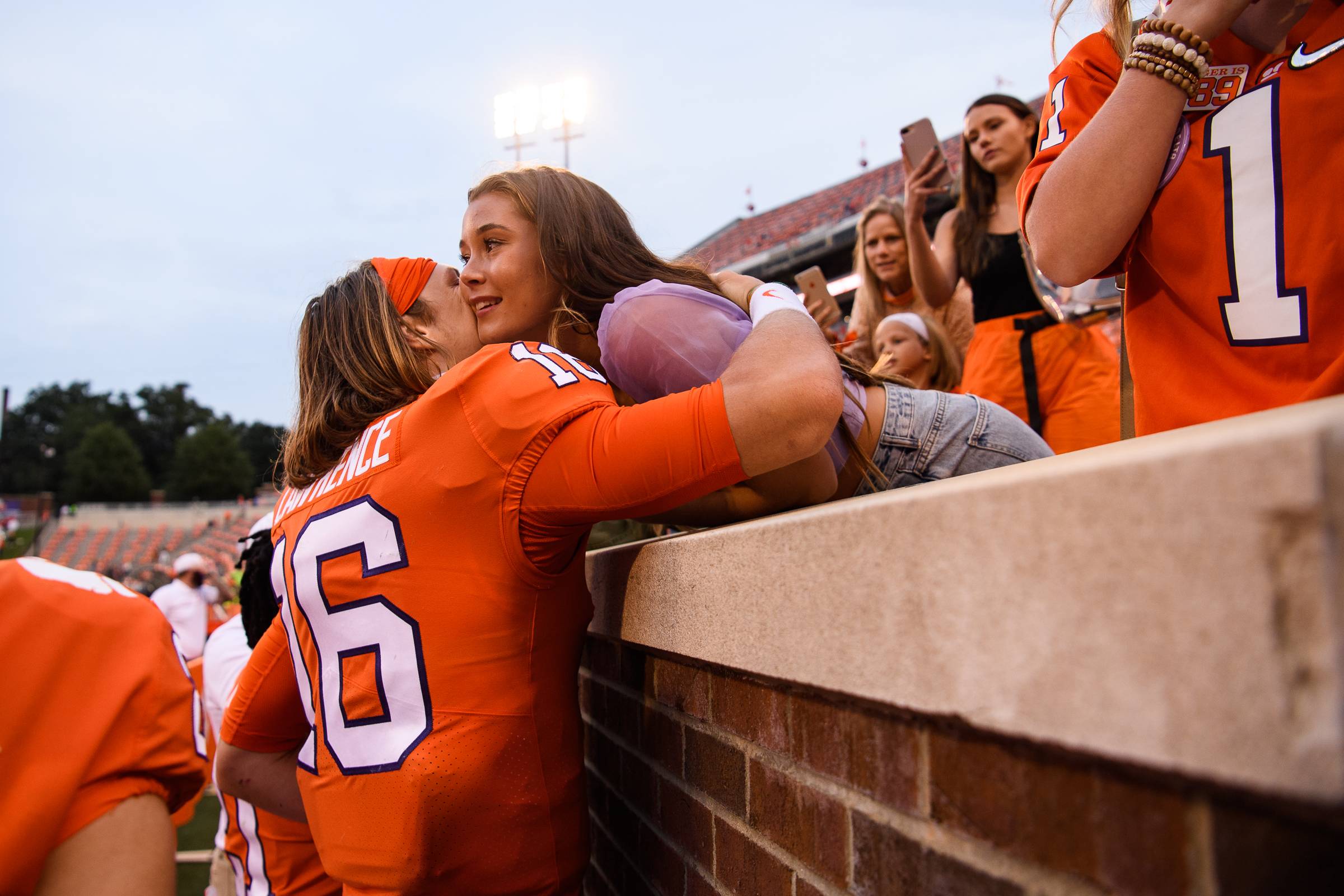