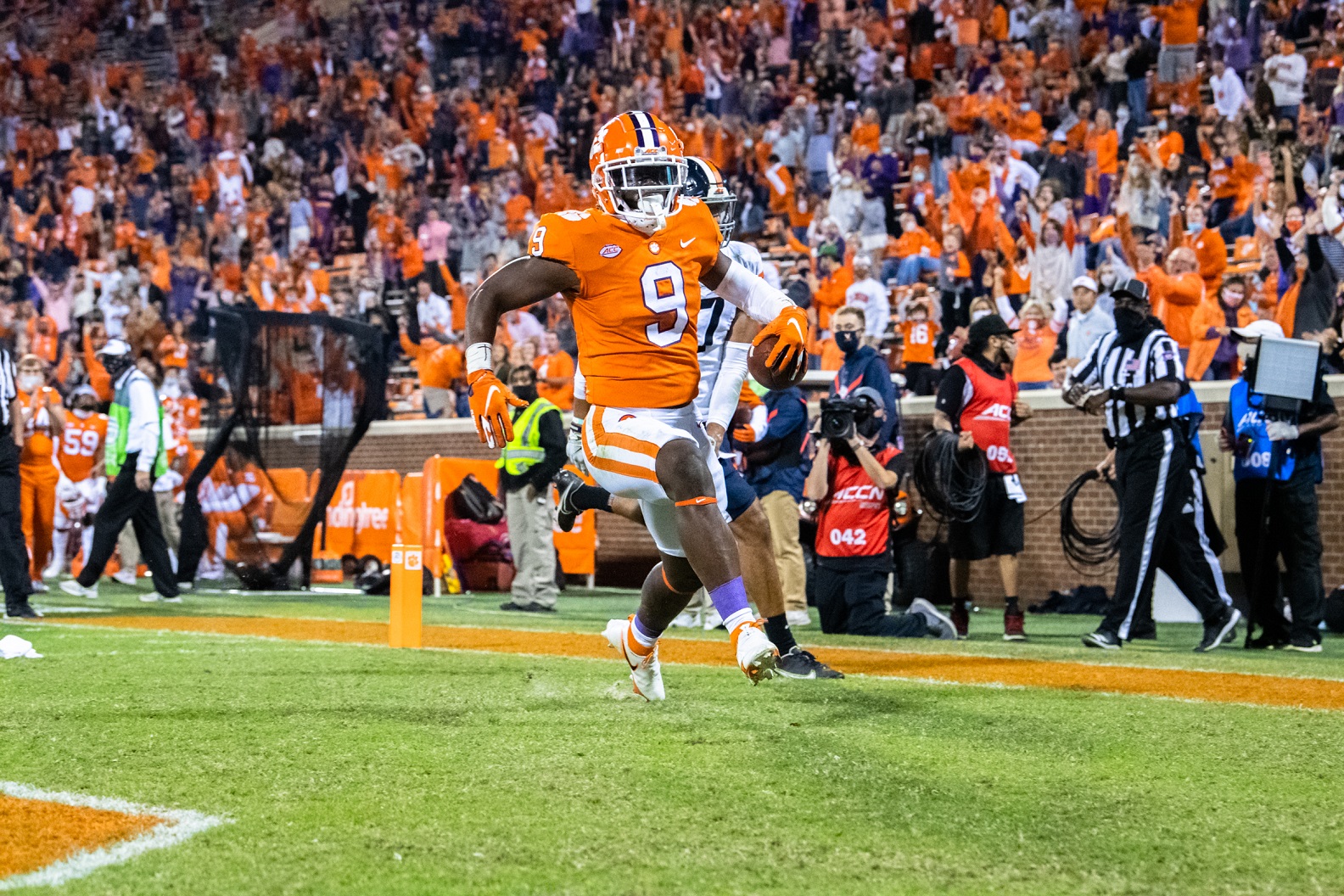 Photo by Trevor Groves CUTigers.com
CLEMSON, SC - The Tigers allowed more points than they've allowed against an ACC opponent since Syracuse scored 23 in the "Chase Brice game" over 2 years ago, but Trevor Lawrence and Travis Etienne demonstrated why they are the best QB/RB duo in the nation on Saturday night. They set an all-time record with their 46th consecutive Saturday win, previously held by the 1953-57 Oklahoma Sooners during their fabled 47-game win streak. Coincidentally, those Sooner teams were coached by Bud Wilkinson, the only man other than Dabo to win a national title as both a player and head coach. 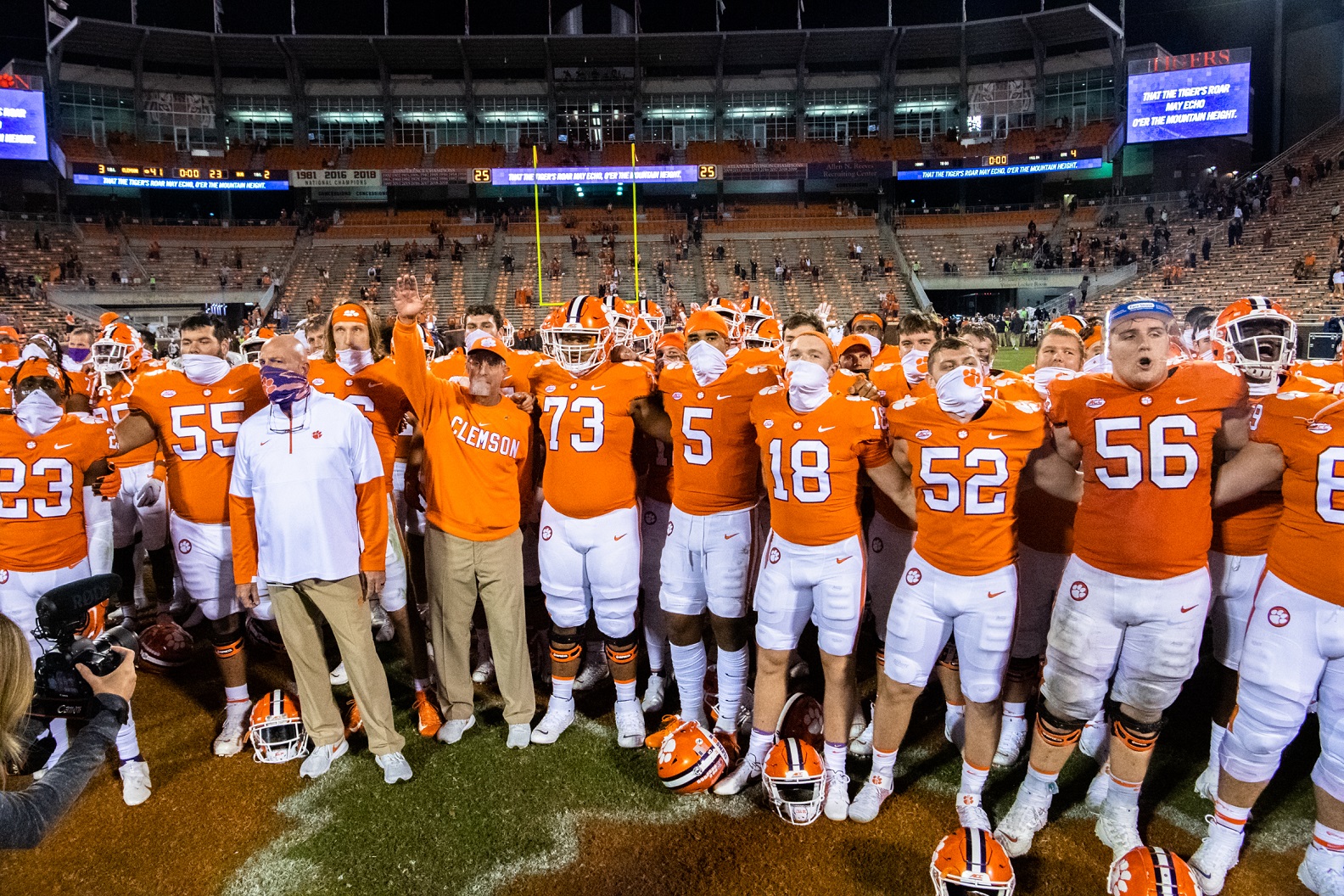 Trevor came out of the bye week as hot as he was before, going 25-38 for 329 and 3 touchdowns with a couple of dropped passes. He could have easily been over 400 yards. He extended his streak to 314 passes without an interception and needs just 66 more to break Russell Wilson's ACC record. For the third straight game, he was incredibly accurate on deep balls, finding Amari Rodgers in the back of the end zone for the 3rd straight game, this time for 27 yards, and another completion to Ladson for 29. Trevor also threw a strike to Davis Allen on the sideline for 18 yards on 3rd down and made a beautiful pass to the end zone that was dropped by Rodgers with tight coverage. He has certainly played like a Heisman winner through the first 3 games of the season. 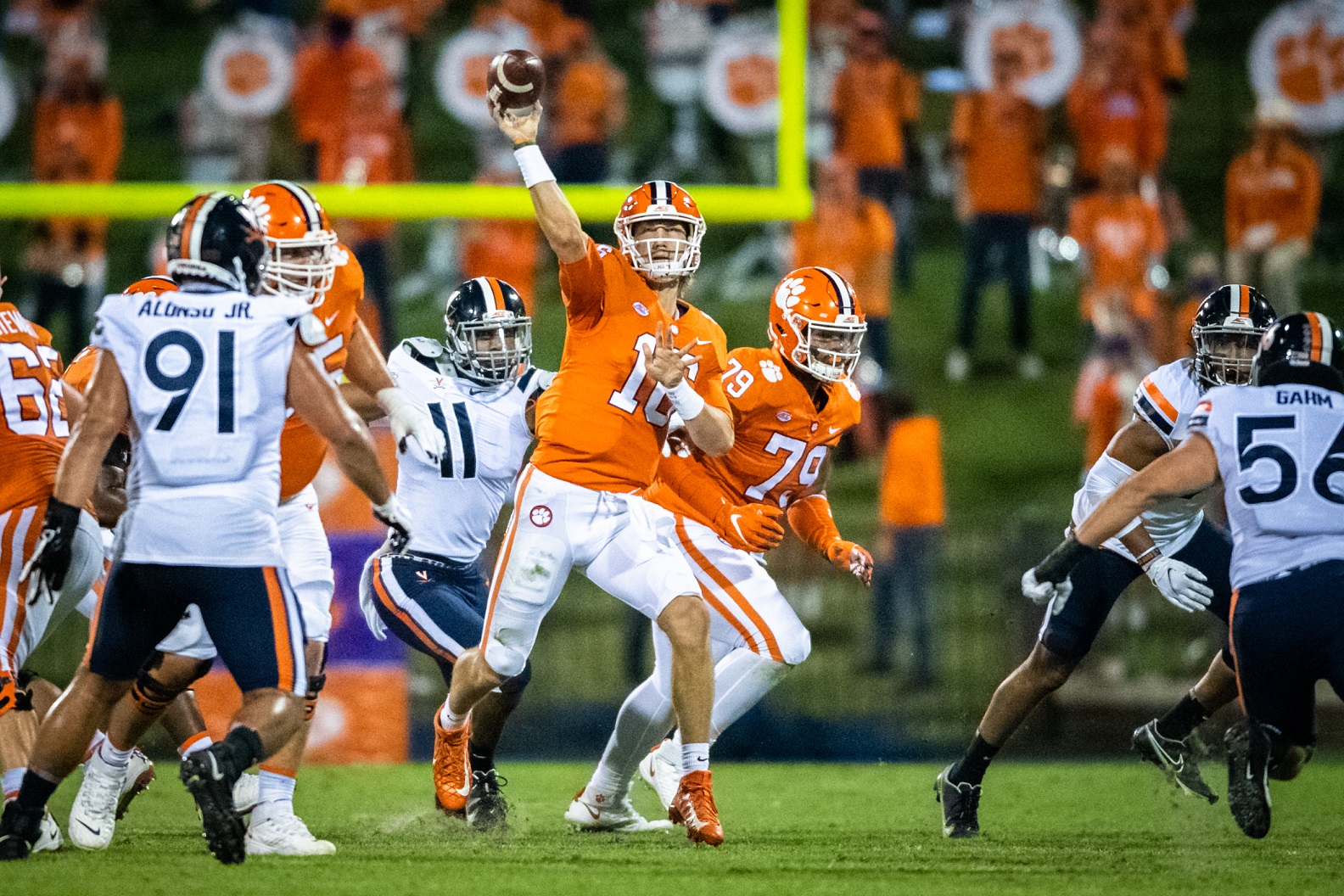 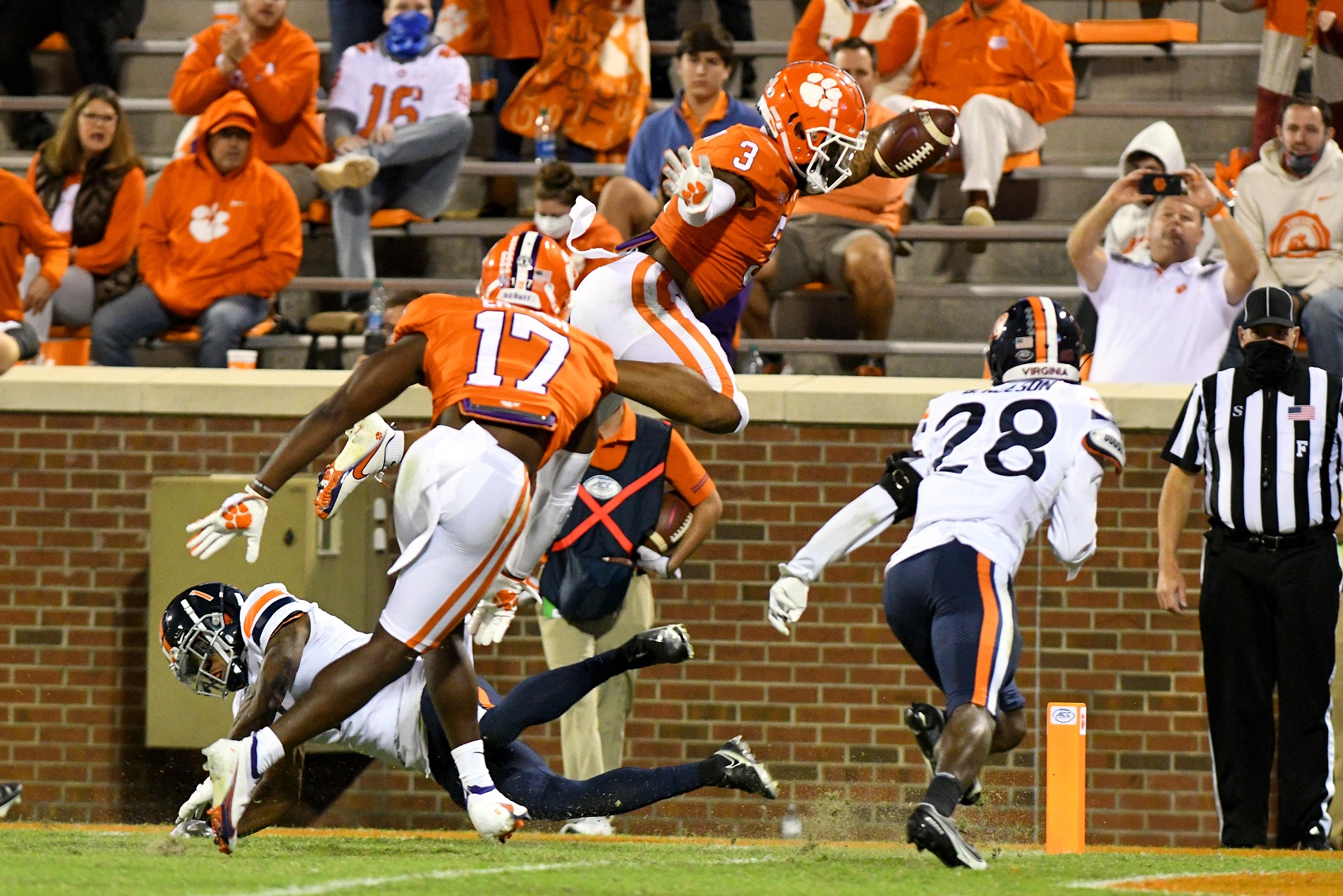 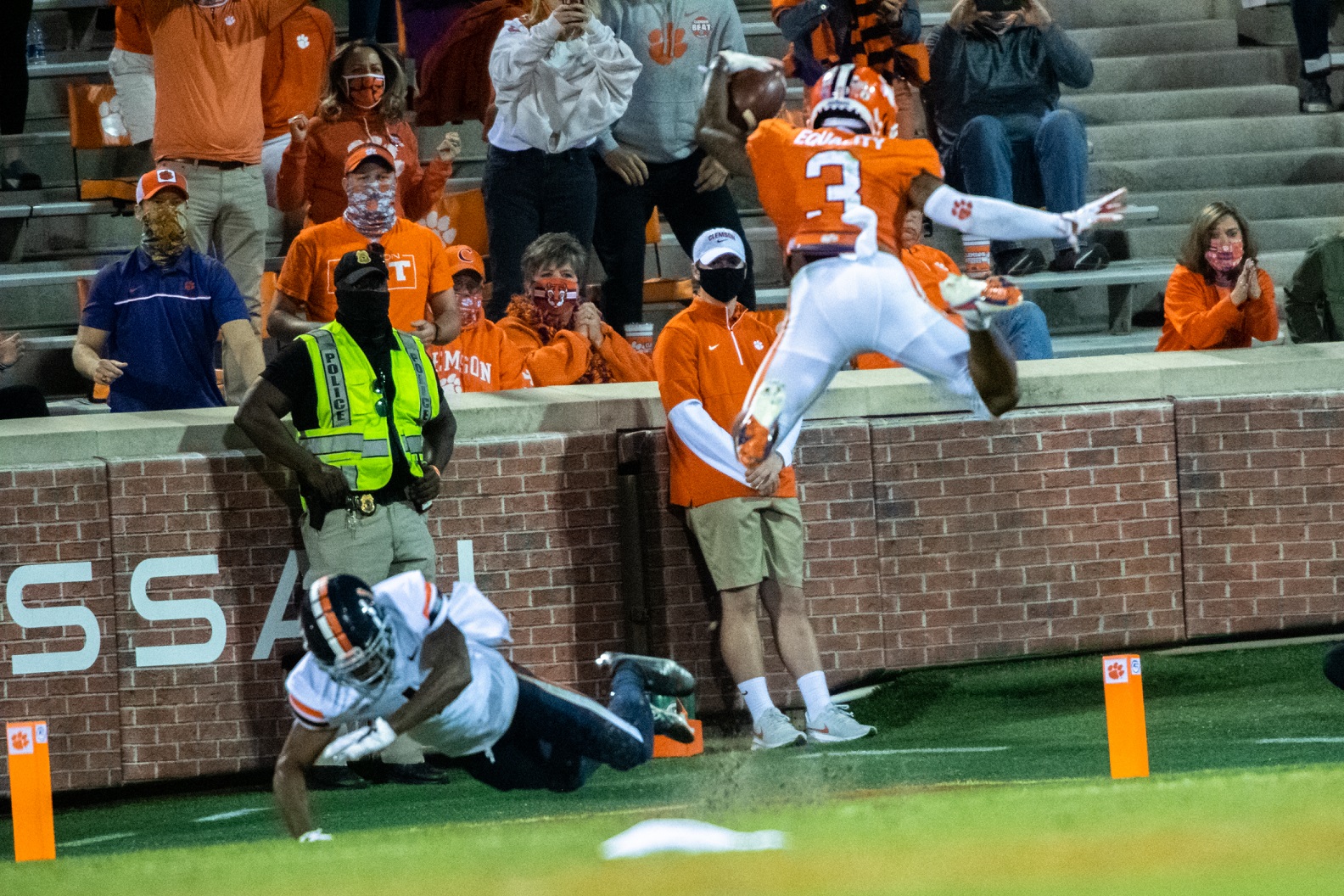 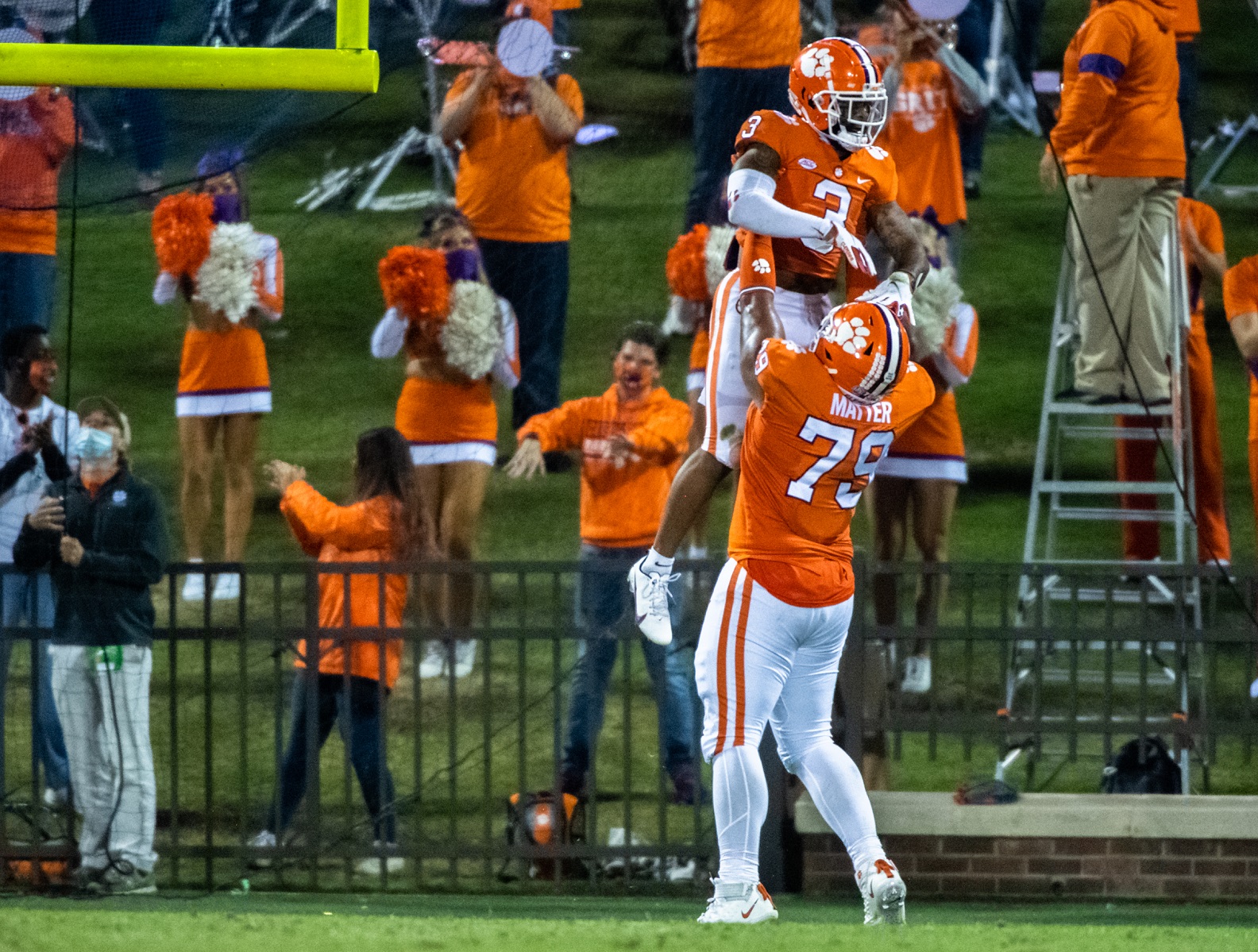 Trevor's running mate in the backfield wouldn't be outdone, though. Travis gained 187 total yards with 2 touchdowns; one rushing and one receiving. He had 5 catches for 105 yards and I believe his first 100-yard receiving game, adding 73 rushing yards on 5.3 yards per carry. Travis also made history, tying Tim Tebow's record for most career games (38) with a touchdown. A couple of his runs were a reminder of how truly special he is, bouncing off tackles and breaking long runs when it seemed the defense had him dead to rights. After the game, Dabo compared Travis to "Sweetness," Walter Payton, the NFL Hall of Famer, and Travis sure played like him on Saturday night. 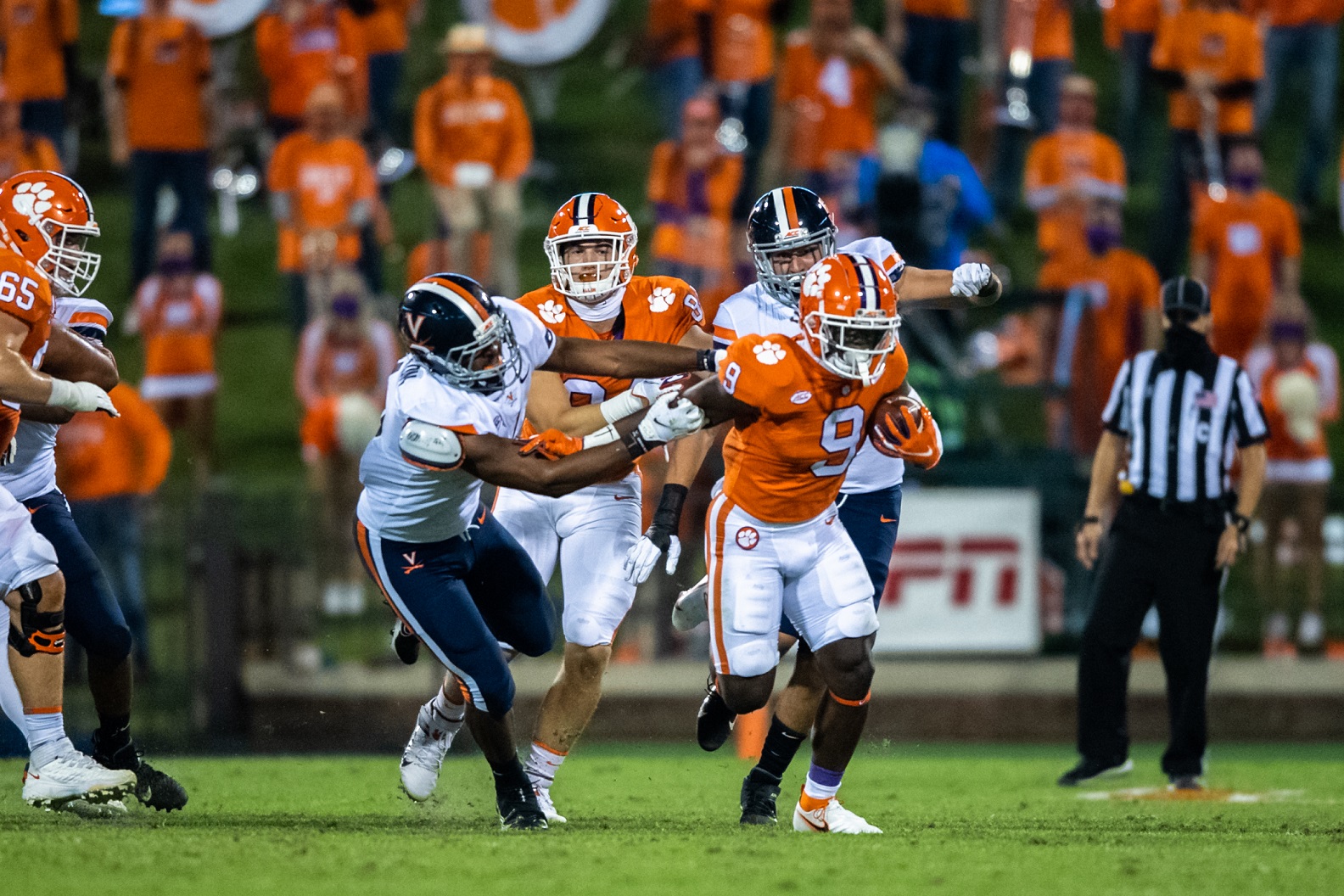 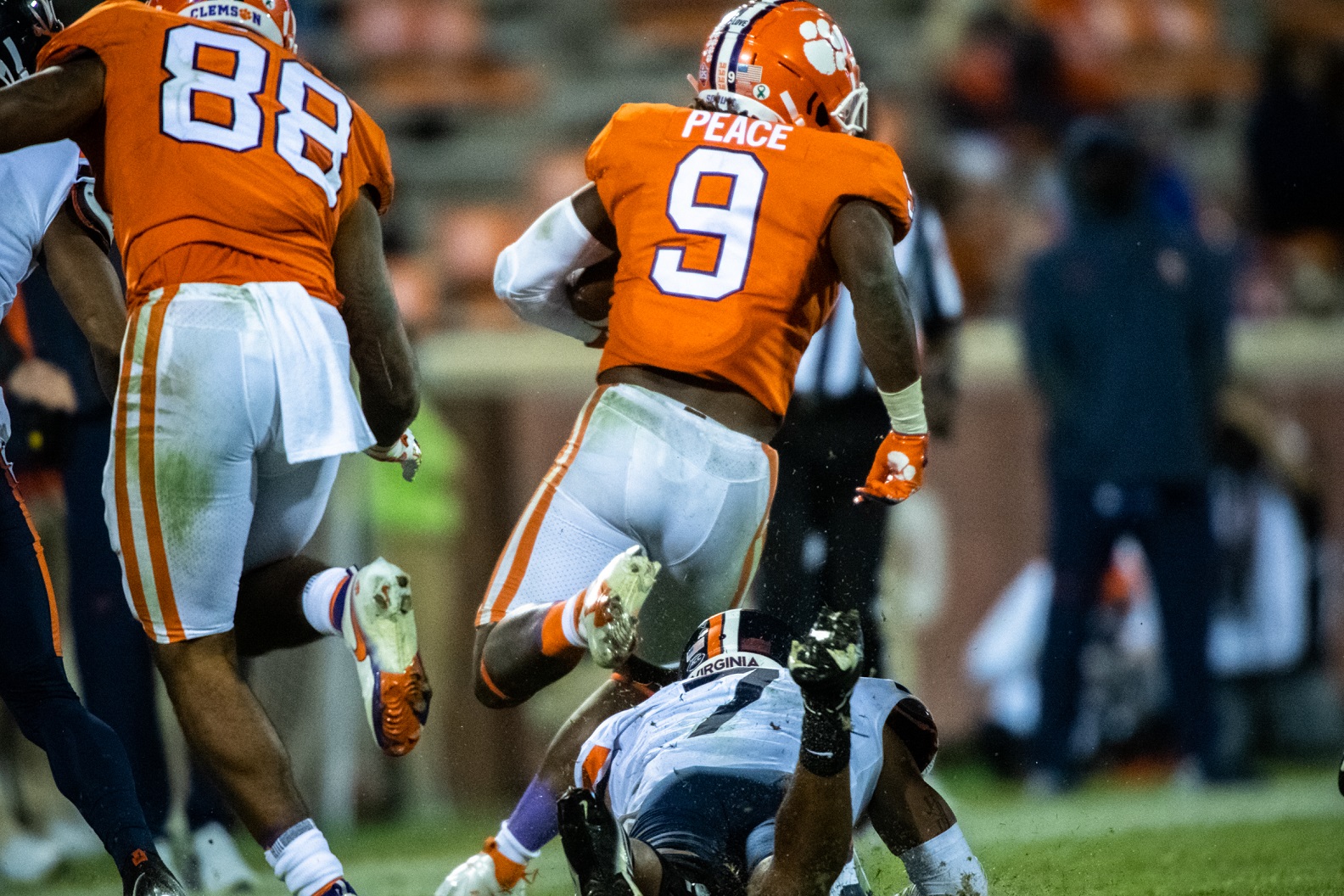 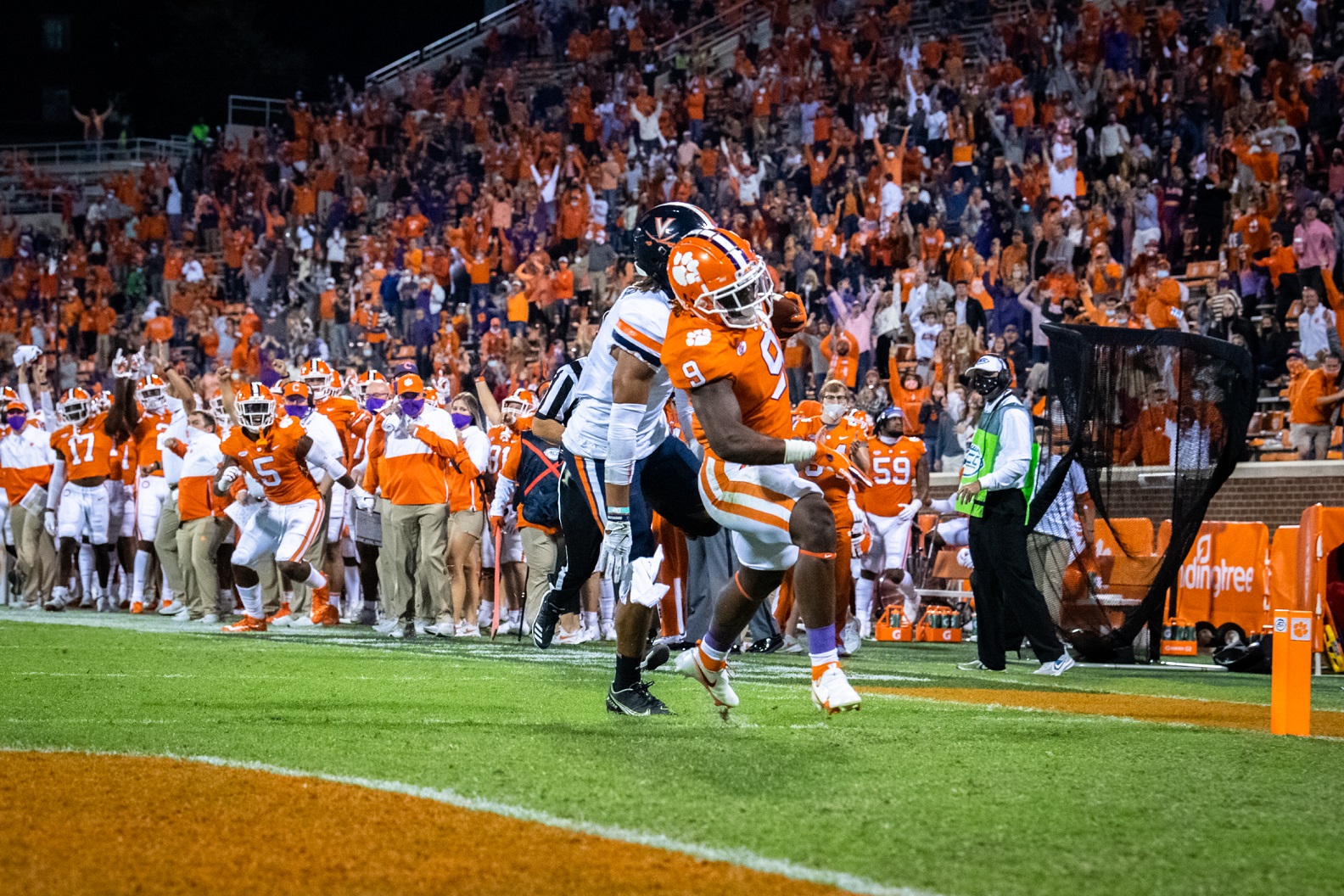 The offensive line gave up 2 sacks, and Trevor was called for grounding in avoiding a third, but you're going to give up some sacks when you drop back to pass 38 times. Overall, the line played well. As I expected, the tight ends were once again involved in the passing game after recording no catches in the last game. Davis Allen came up with a big 18-yard reception to convert on 3rd down, and Galloway added 2 catches for 17 yards. I thought we'd see a little more from Galloway, however. Ngata was coming back from a slight injury and did not record a catch for the second straight game. Ladson and Rodgers picked up the slack with 5 and 6 catches, respectively, and Brannon Spector added 4 catches for 32 yards after missing the last game due to COVID.
There were several miscues by the offense coming out of the bye week, but one thing they did extremely well was protect the football. Virginia forced 7 turnovers, including 5 interceptions, last week against Duke, but the Tigers didn't give the ball away once, and they won the turnover margin for the first time this season.
Defensively, it wasn't the dominant performance with which we've been spoiled for so many years by Brent Venables's crew. Again, it was the most points they've allowed against an ACC opponent in over 2 years and the most in any regular season game since South Carolina in the 2018 season. They allowed 417 yards, which was also the most in a regular season game since that 2018 Palmetto Bowl. UVA marched down the field in 38 seconds for a touchdown to end the 1st half, and that's something we rarely see. However, bear in mind that 23 points is still a very low number in today's game. On the same day, Alabama allowed 24 points against an A&M team that scored just 17 at home against Vandy last week. It's also the third game of the season for the Tigers, and UVA did some things that they hadn't shown in their one game of film, catching the Tigers off guard. Armstrong is a very good quarterback, and he's going to give lots of teams trouble this season with his ability to run and throw. Also, as I wrote in my preview, UVA has one of the most experienced offensive lines in the entire country, and they were a challenge for this young Clemson front. I don't want to sound like I'm making excuses, but I expected this defense to be a work-in-progress, getting better as the season goes, so I'm not too surprised that we saw some hiccups on Saturday night. And it might be the best thing for the Tigers with D'Eriq King and top-10 Miami coming to town next week. If they had pitched another shutout, they'd be thinking about how great they are all week. Instead, Venables will be riding their tails all week. I think you'll see a unit with a chip on its shoulder against the Canes! On the positive side, the defense recorded its first two interceptions of the season, including a spectacular one-handed catch by first-year starter Andrew Booth in the end zone. Booth also had a nice PBU against the Hoos' dangerous 6'7 receiver, and this is the kind of game that can really boost the young player's confidence. I can't remember the last time I saw an interception as impressive as that one! Nolan Turner came up with the other INT, reading the quarterback's eyes and jumping the route. It was his 4th career interception but 1st during the regular season. He had one against UVA in the ACC Championship last season. 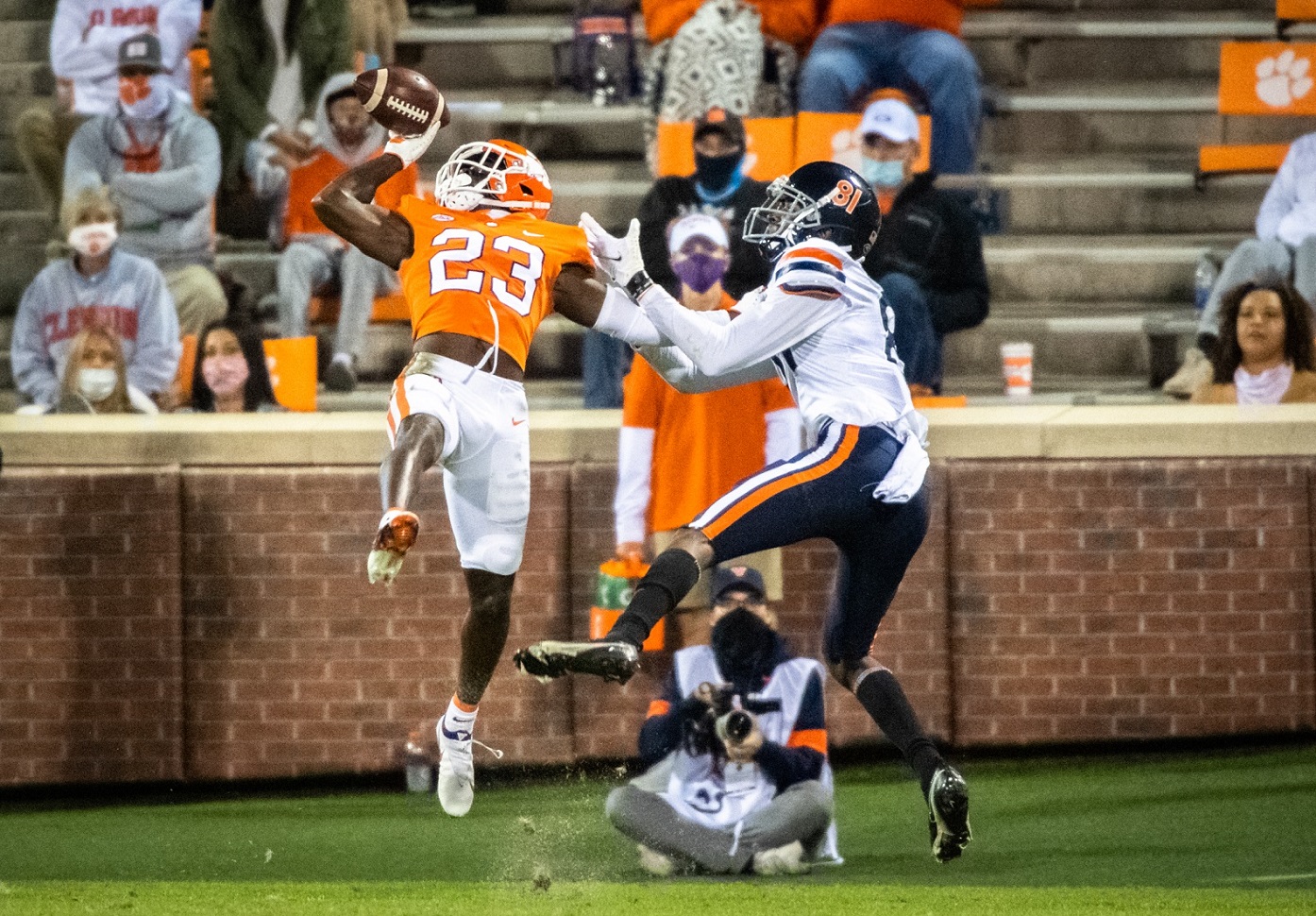 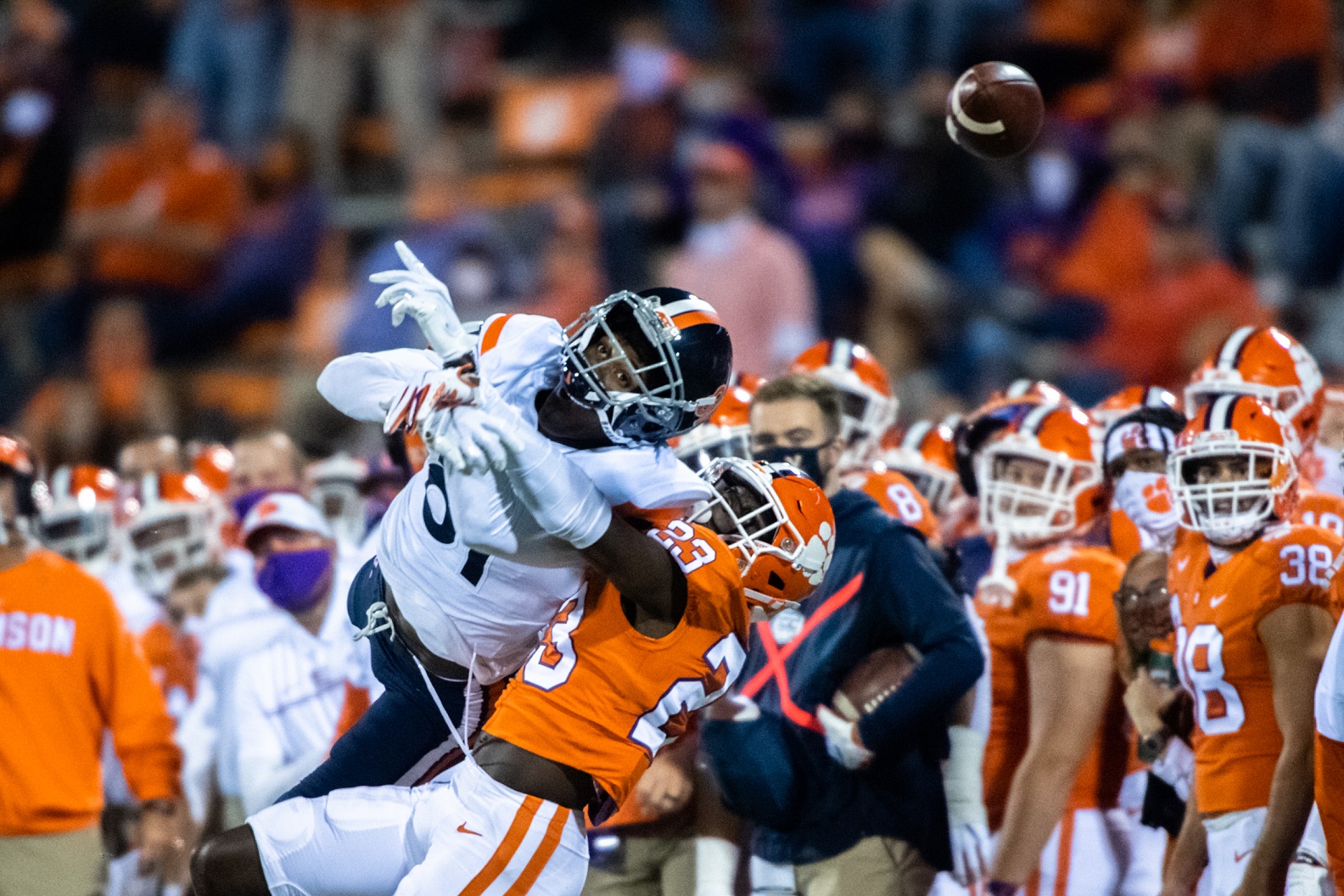 Finally, the special teams continued to play well. BT Potter was perfect on the night, making both his field goal attempts from 47 and 42 yards. Lyn-J Dixon opened the game with a 52-yard kickoff return. The Tigers' coverage units were good, and Spiers was solid on his 3 punts. 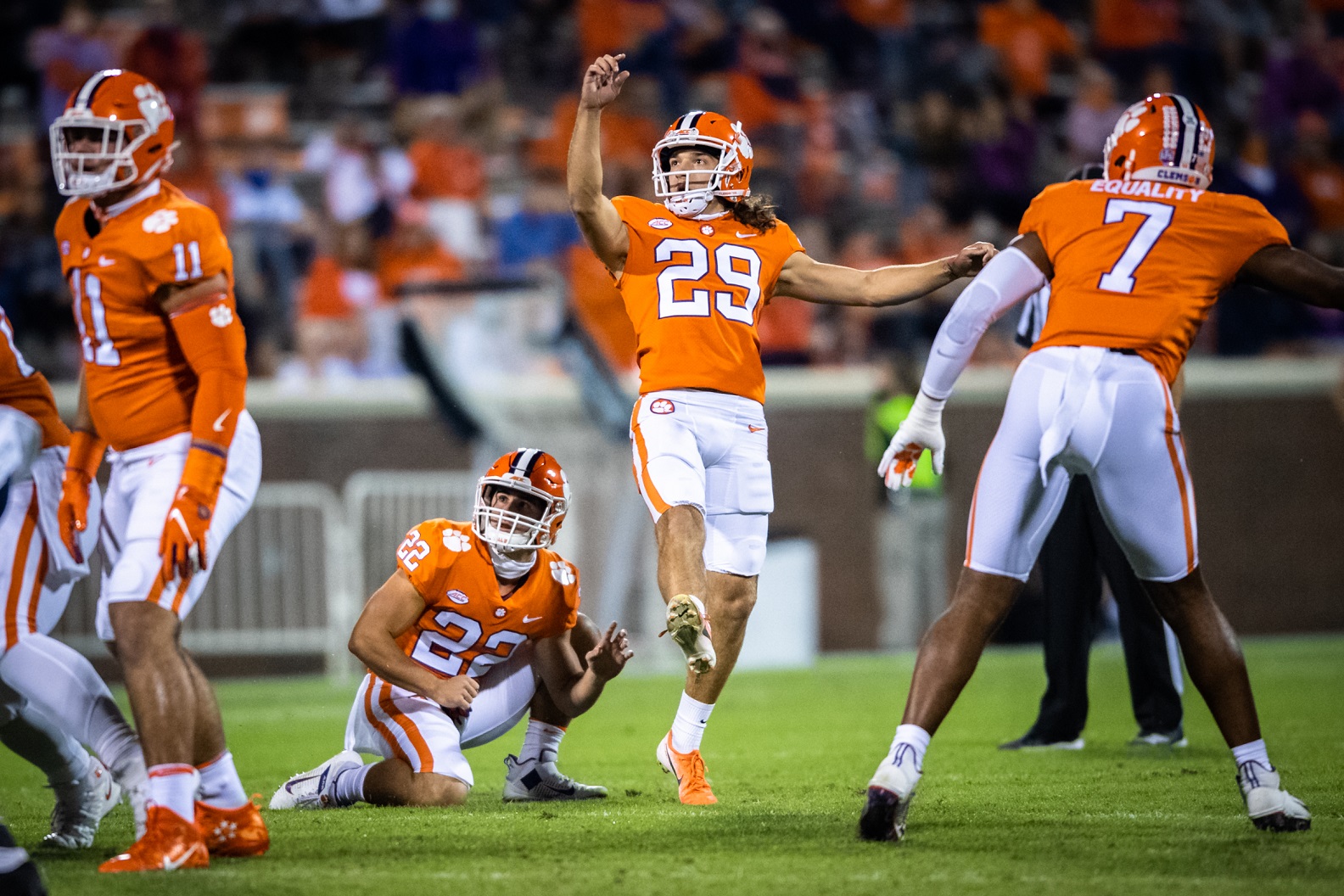 Clemson is the first school to win 300 ACC regular season games, and the Tigers are now 72-5 since the start of 2015, which is best in the nation, and 32-1 in their last 33 games. They have won 24 straight games against ACC opponents, 24 straight home games (school record) and 32 straight regular season games (ACC record). As I predicted last week, ESPN College GameDay will be coming to Tiger Town for the ACC showdown between No.1 Clemson and top-10 Miami. Armstrong and UVA were a good warmup for what the Tigers will see from Heisman candidate D'Eriq King and the Canes. Click the link below for post-game interviews and our Sunday evening teleconference with Dabo!
MORE CLEMSON FOOTBALL COVERAGE HERE
GAME NOTES