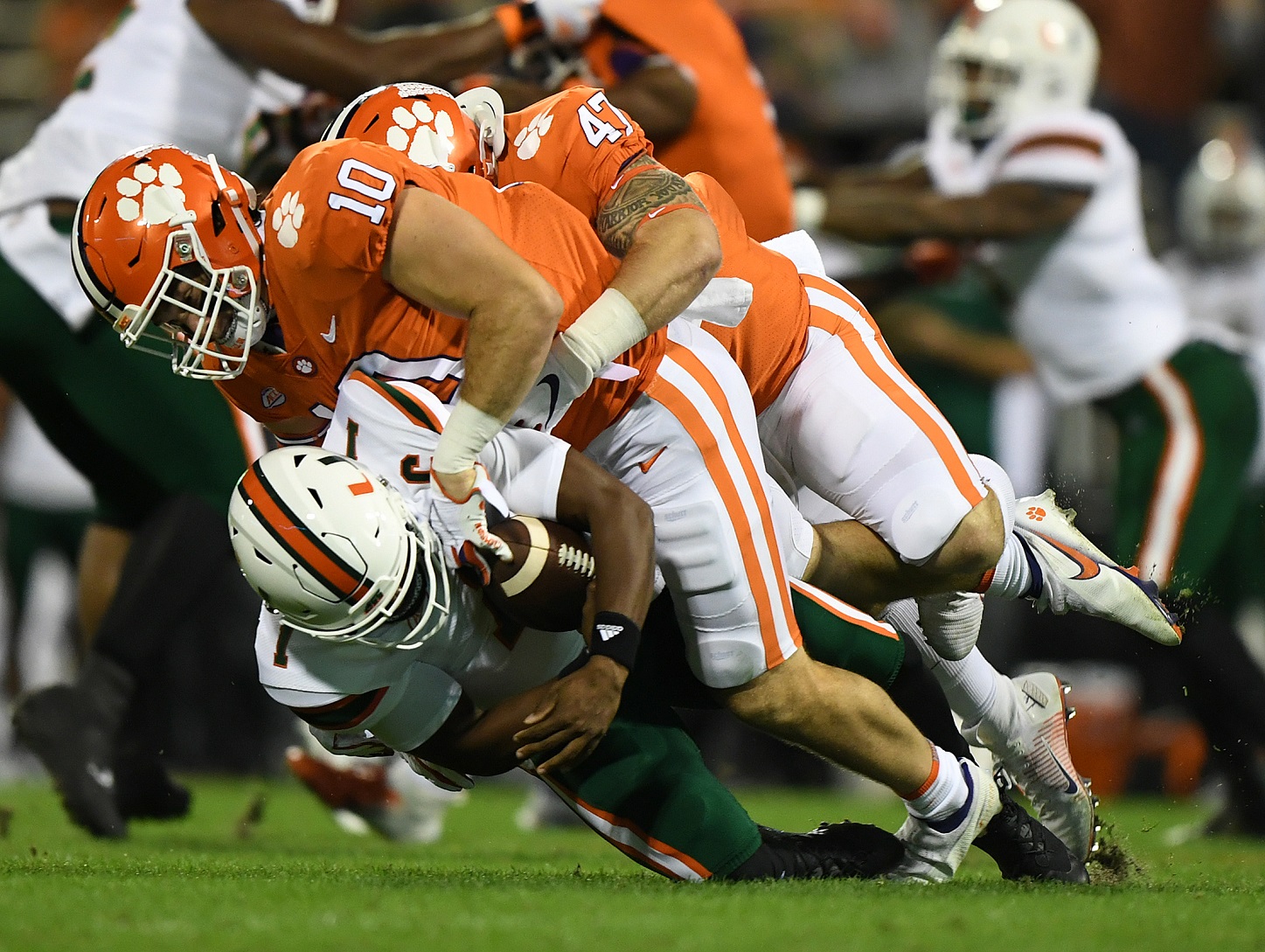 
TWO HEISMAN CANDIDATES ARE BETTER THAN ONE: NO.1 CLEMSON CRUSHES NO.7 MIAMI 42-17 IN DEATH VALLEY 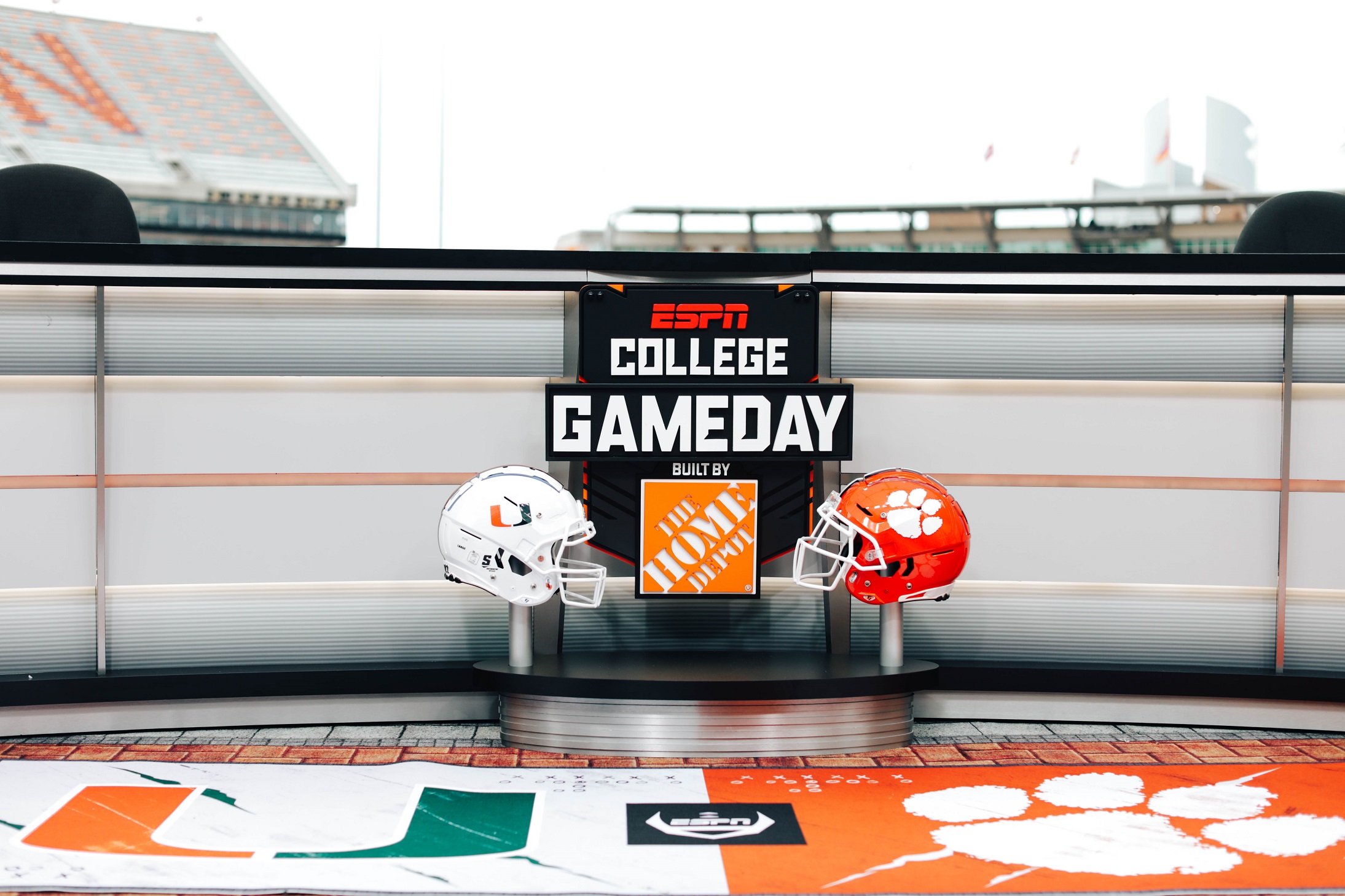 CLEMSON, SC – The No.7 Miami Hurricanes stormed into Death Valley as one of the major storylines in all of college football, as folks around the country wondered whether another ACC team would finally be able to challenge No.1 Clemson. Well, the Tigers served notice to the rest of the ACC and the nation that the answer is an emphatic no, crushing the upset-minded Canes 42-17, and the game wasn’t even that close. It could have easily been 59-10, as a few self-inflicted mistakes by the Tigers and running out the clock on the one-yard line kept the score from being even more lopsided. 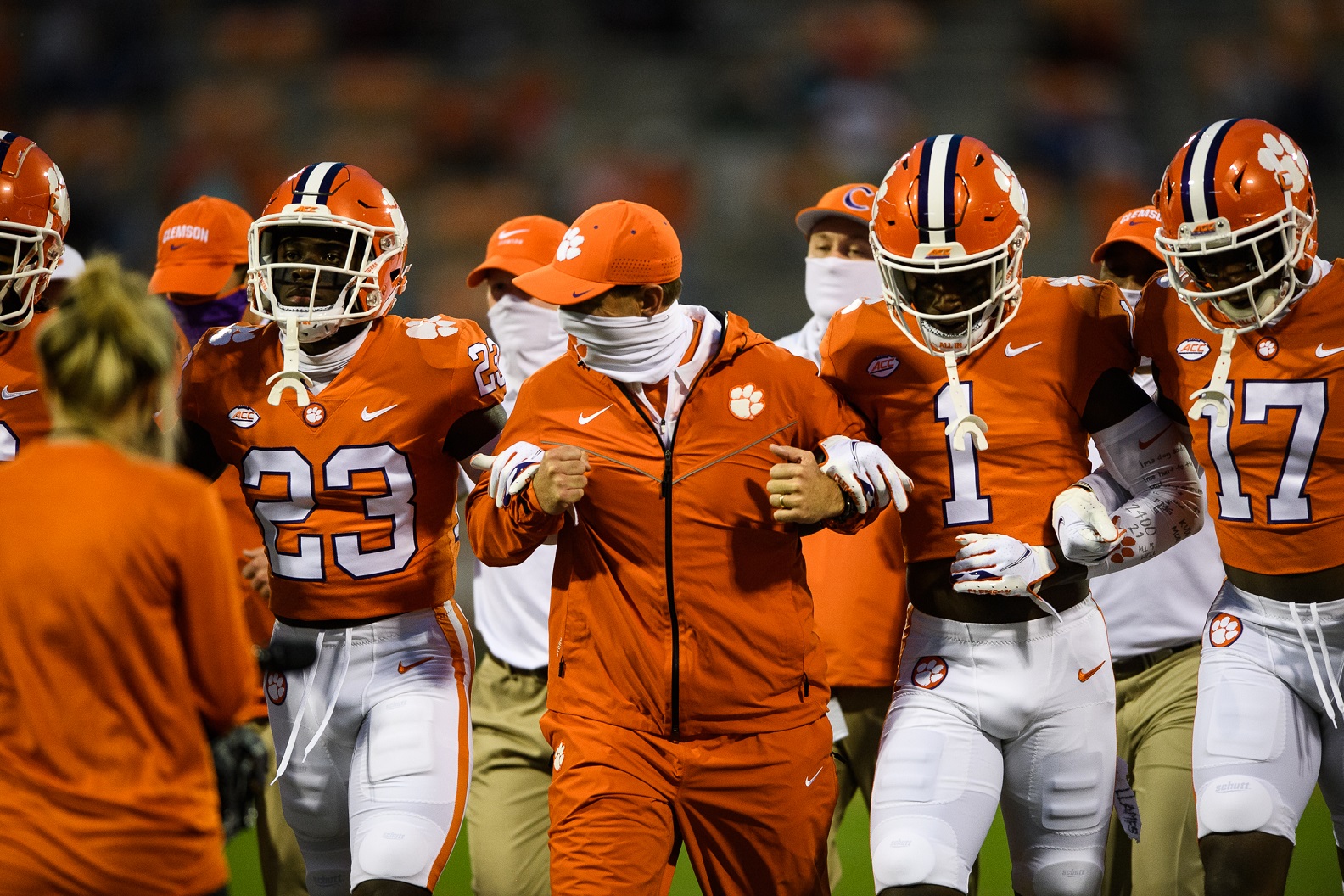 The Tigers dominated in yardage, ball control and first downs from the outset, taking an early 14-0 lead. They led 21-3 and were driving as time was winding down to halftime, but on fourth and 6 at the Miami 44, rather than let time run out and head to the locker room with a 21-3 lead, Dabo elected to send BT Potter out for a 61-yard field goal attempt, and it blew up in their faces. Miami blocked the attempt for a kick-six, taking it to the end zone to make the score 21-10 at halftime. Dabo was angry at himself and took ownership of the risky decision, saying, “Terrible decision by me. Nobody’s fault but mine.” Incidentally, Spencer Benton made a 61-yard field goal for Dabo in 2012, setting a Clemson and ACC record, and Dabo has seen Potter make kicks from that distance in practice, so he had good reason to make that attempt. However, given that the Tigers had all the momentum, it was raining, and Potter already had a kick blocked earlier, Dabo should have erred on the side of caution rather than tempt fate. 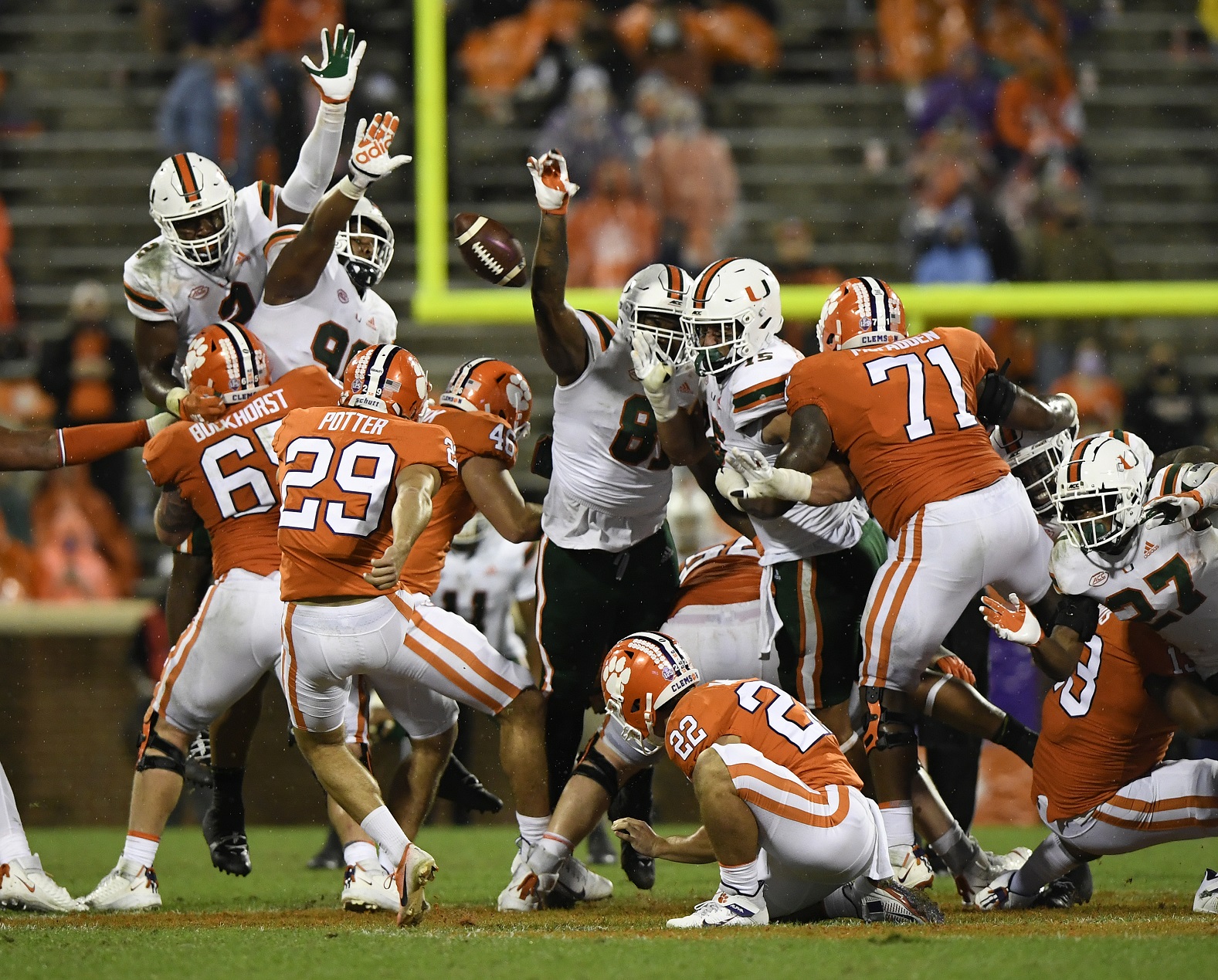 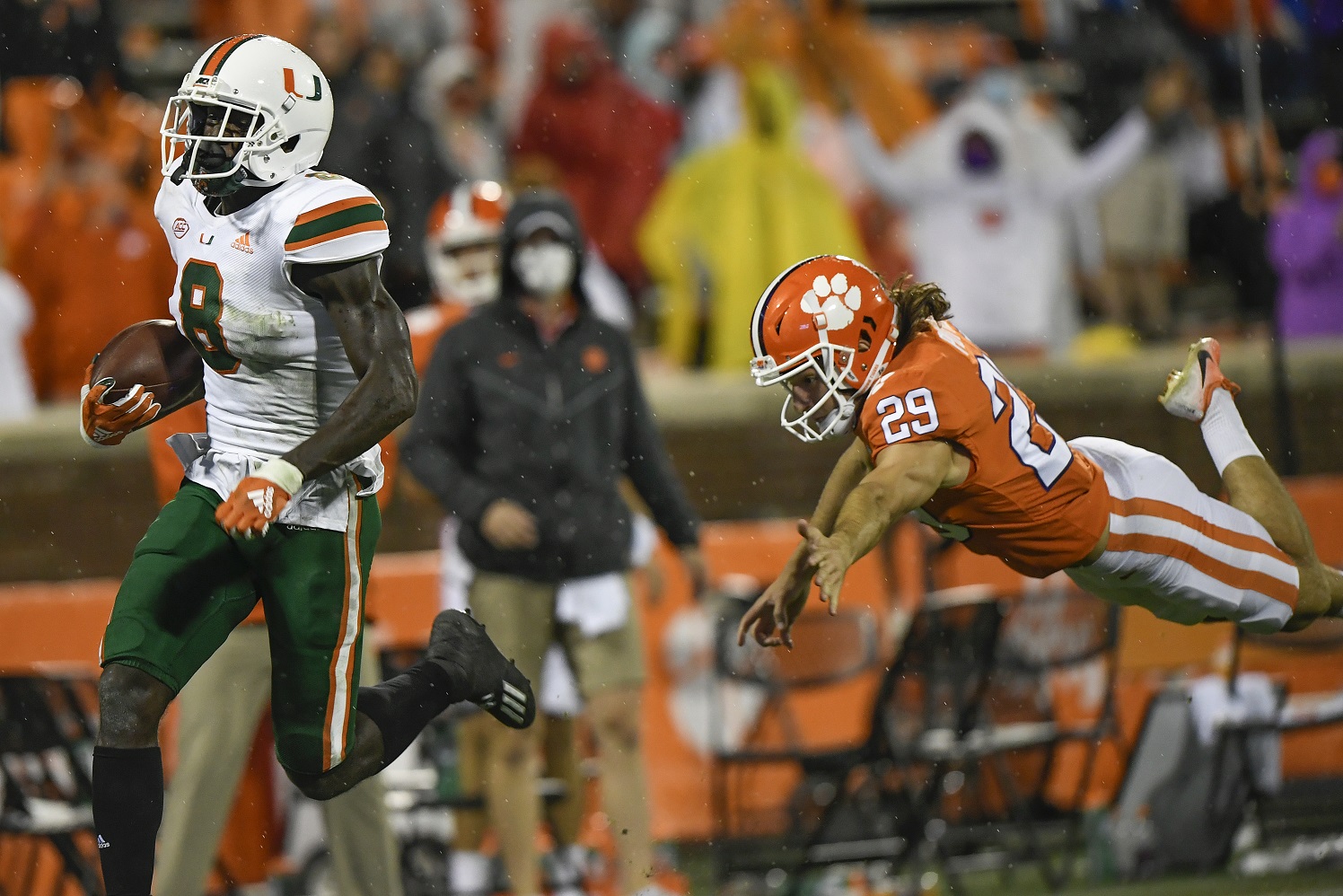 So Miami was given a gift and gained some momentum going into halftime, knowing they would get the ball first in the second half. Fortunately for the Tigers, their defense brought their A game. They forced a three-and-out to start the second half. Then, after a fumble by Trevor Lawrence gave the Canes the ball near the red zone, Sheridan Jones came up with his first career interception in the end zone. It was very similar, in both appearance and context, to the one Andrew Booth made against UVA last week. After the Tigers were forced to punt, the defense came up with another three-and-out, and that set the table for a 72-yard touchdown run by Etienne to make the score 28-10 and give the Tigers momentum for good. Again, the final score could have been much more lopsided than it was. The Tigers outgained the Canes 550 to 210 and had 34 first downs against 9 for the Canes. Total plays were 88 to 55 in favor of the Tigers, who held possession for 17 more minutes than the Canes. The Tigers also were incredibly balanced on offense, running 44 pass plays for 292 yards and 44 rush plays for 258 yards. 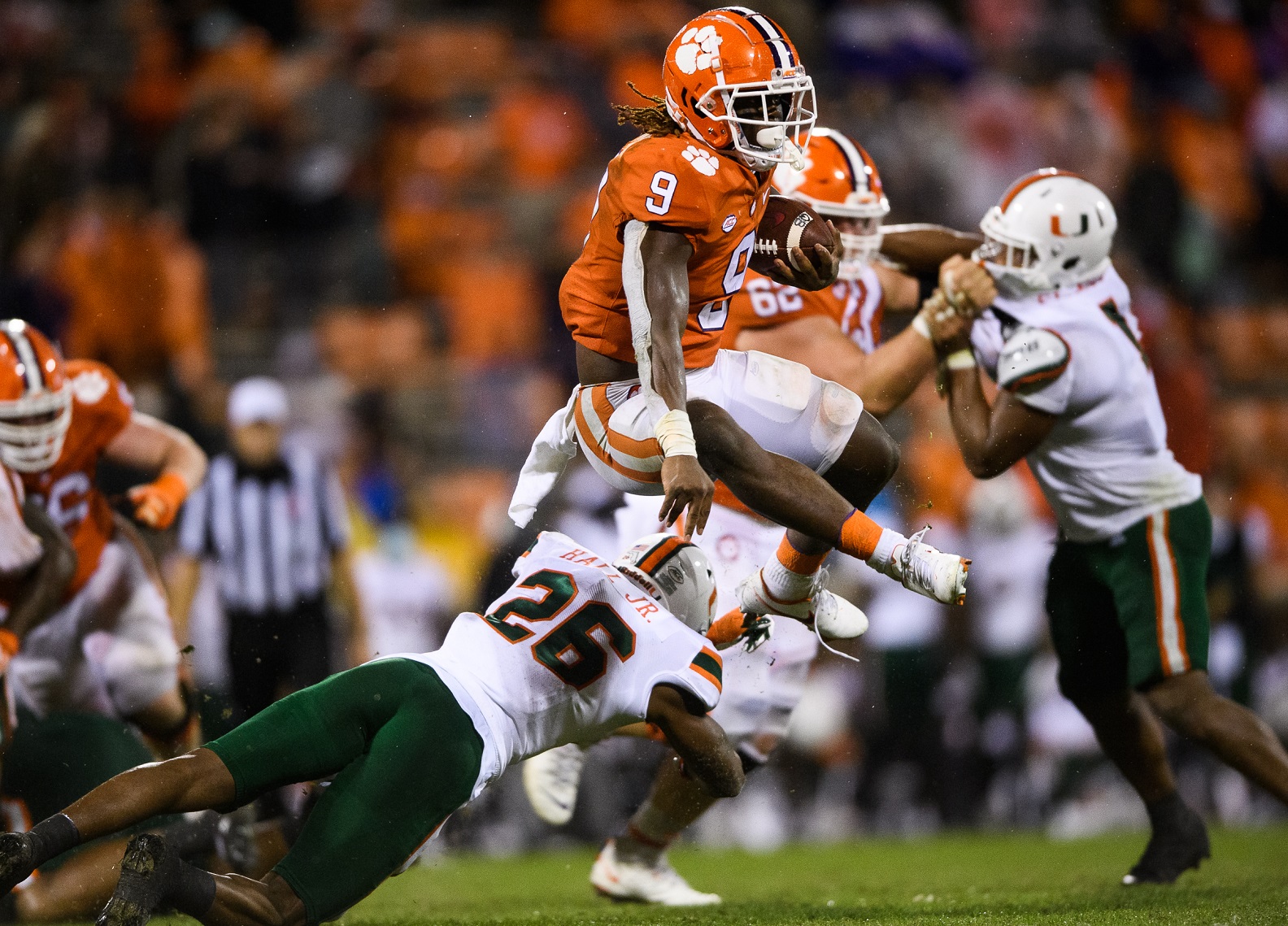 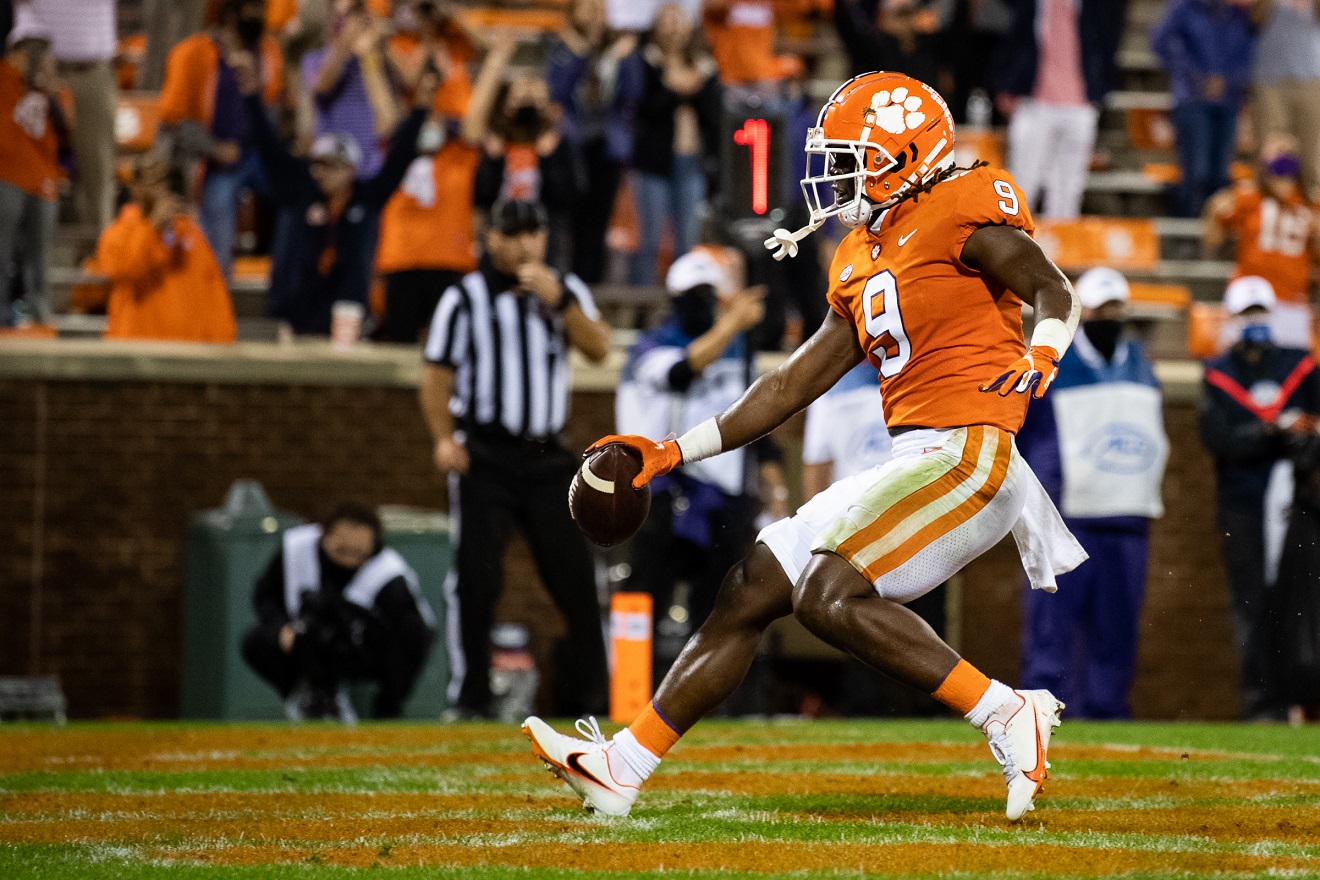 For the past few days, I asked the guys from ESPN College GameDay what the odds were that we could see both Trevor and Travis make it to New York as Heisman Finalists. Seldom do we see two players from the same team—especially the same offense—make it to New York because they have to compete with each other for stats. I believe the last time two players from the same offense were Heisman Finalists was 2004 with Matt Leinart and Reggie Bush. However, Trev & Trav both played like Heisman front-runners on the big stage Saturday night. 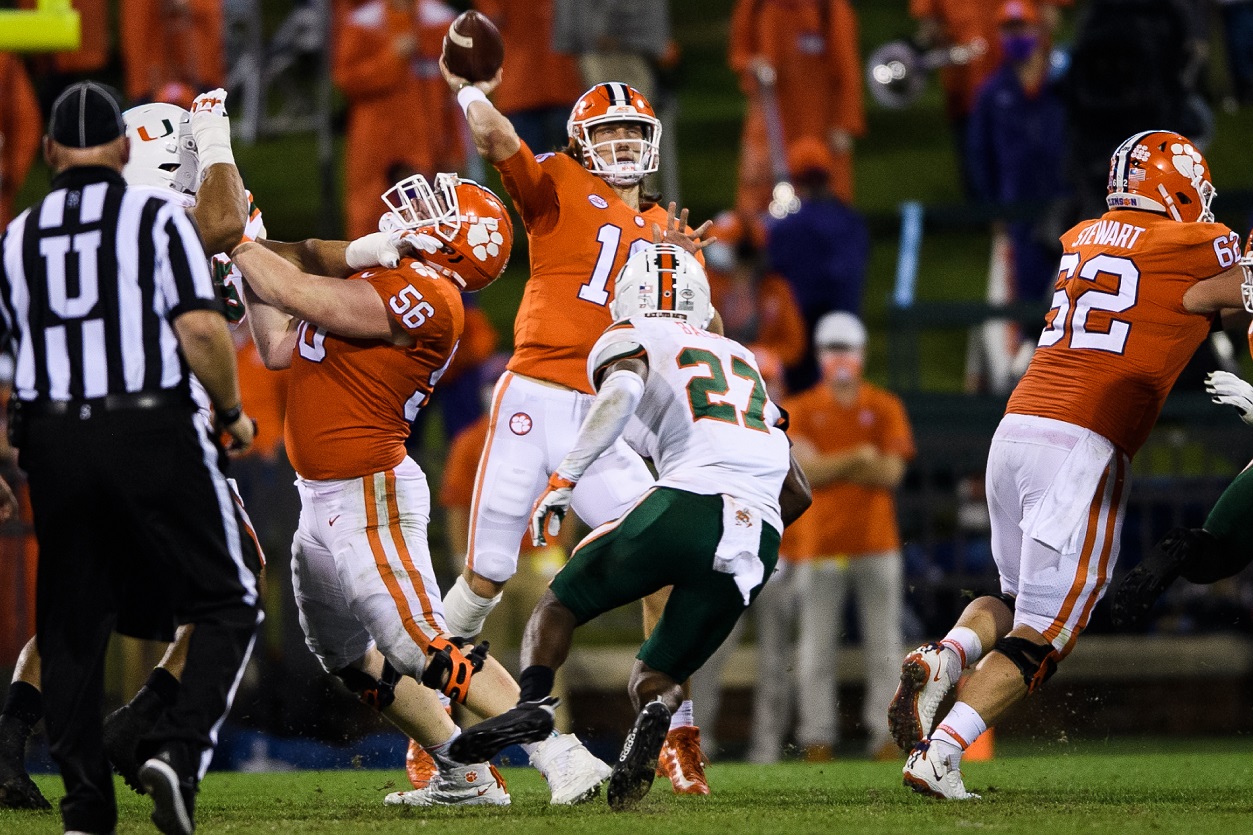 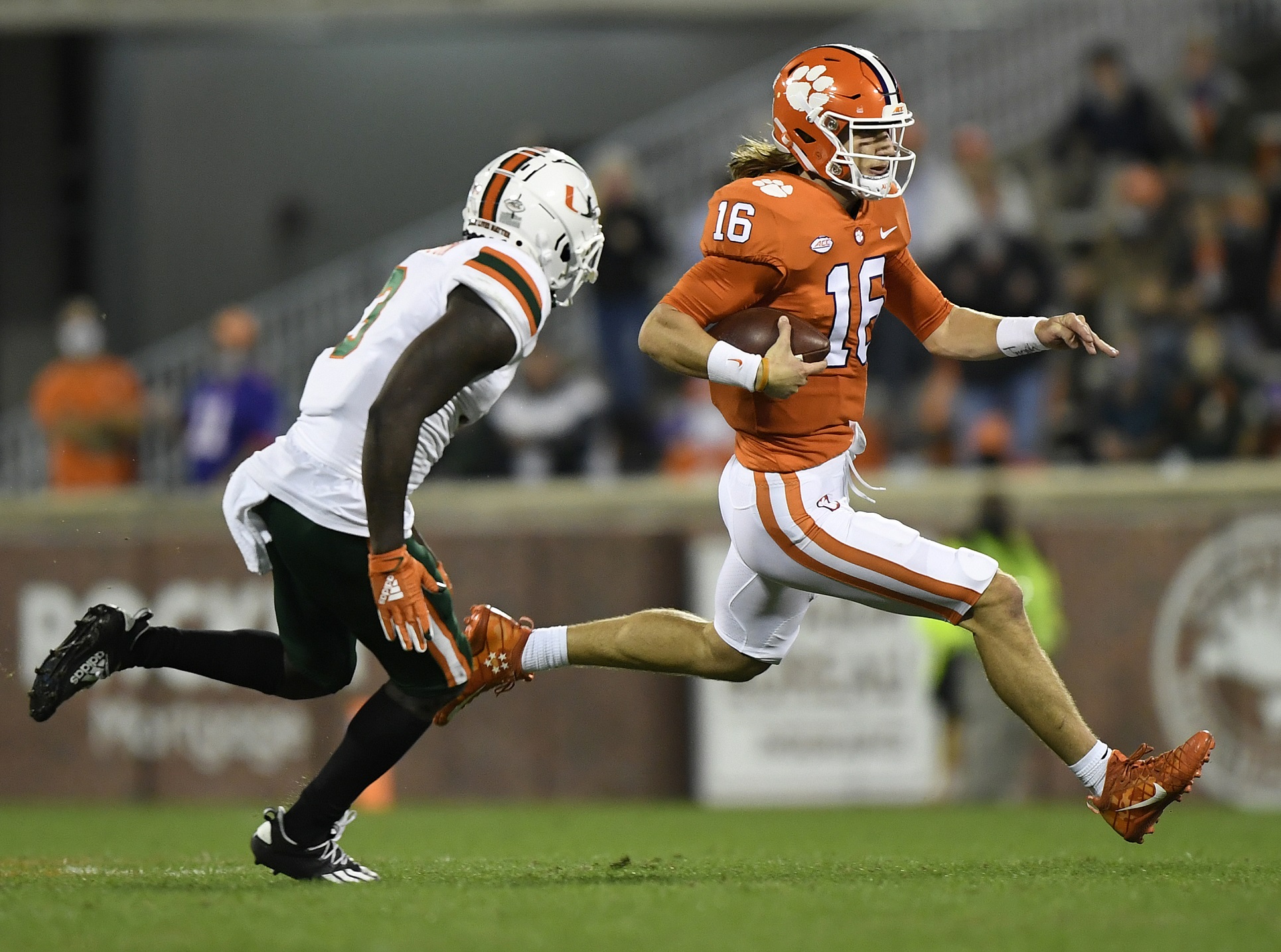 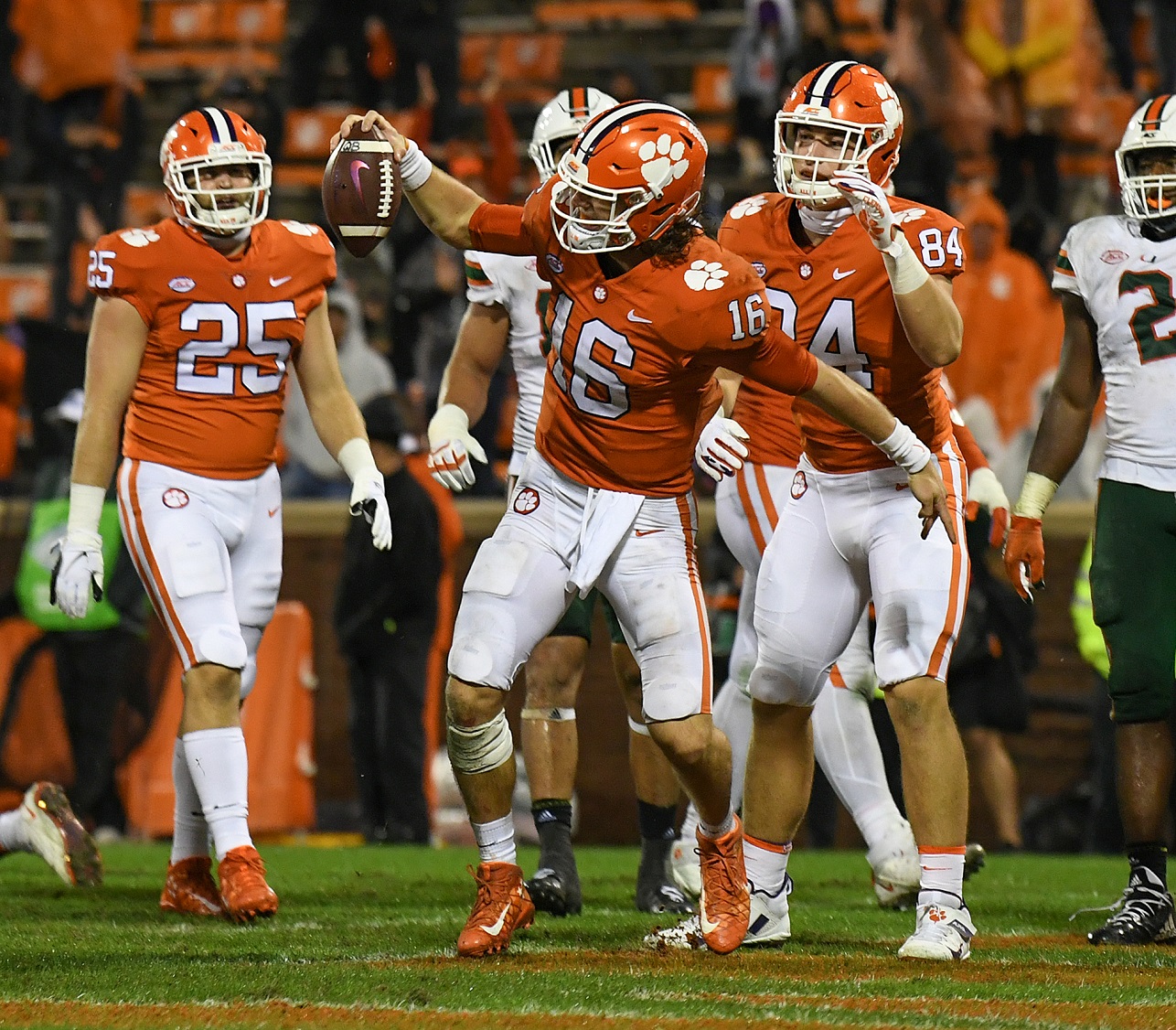 Trevor has been sublime all season, and he continued his near perfect play, going 29-41 for 292 yards and 3 touchdowns. He should have had another 60-yard touchdown pass, but Frank Ladson dropped a ball Trevor dropped right in his hands on third and long. Trevor also rushed for 34 yards and a touchdown, his fourth rush TD of the season. The Tigers found themselves in third and long all night—the average distance on third down was 9 yards—but they still managed to convert on 8 out of 17. Despite a steady rain throughout the second half, Trevor was extremely accurate, as he has been all season. He has now thrown 355 passes without an interception and needs just 25 more to break Russell Wilson’s ACC record. It looked as if that streak might go by the wayside on the opening possession, but an interception by Roche was negated because he was lined up barely in the neutral zone for an offsides call. Trevor took a couple of hard shots and late hits from Miami’s defense, and the Canes were in his ear all night, so after he ran for a touchdown in the third quarter to put the Tigers up 35-10, Trevor spiked the football and returned some of the talk to the Miami defenders. It’s rare that you see Trevor get that riled up, and Dabo didn’t appreciate the spike, but I know it fired up Trevor’s teammates to see their leader return the Canes’ fire in that way. Trevor’s counterpart, Miami QB D’Eriq King, came into the game with Heisman hopes of his own, but he did not fair well. More on that in a bit! 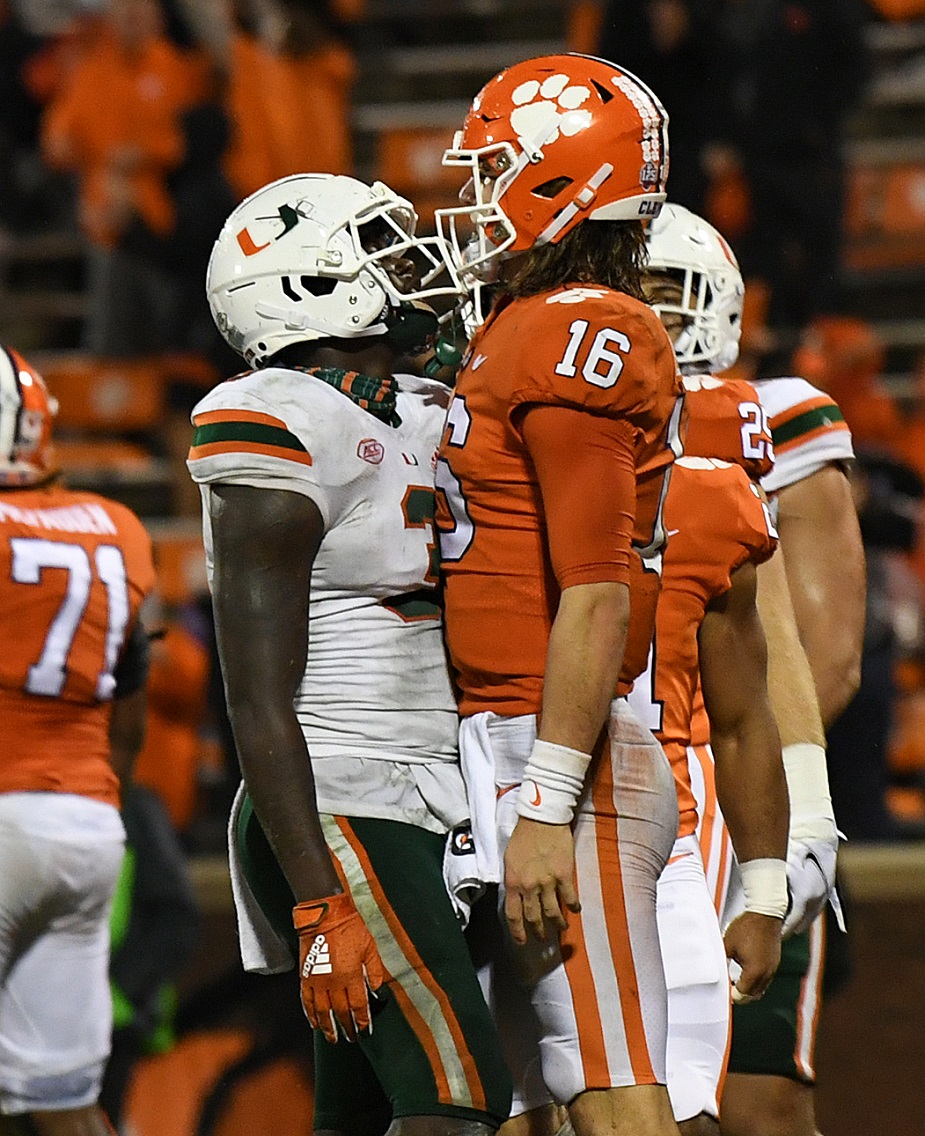 Travis Etienne dazzled once again, racking up 222 all-purpose yards with 2 touchdowns. He rushed for 149, averaging 8.8 yards per carry, and had 8 catches for 73 yards. Since late last season, Travis has gradually become more of a regular weapon in the passing game, and it will likely be the case in just about every game this season. He set a Clemson running back record with 114 reception yards last week and is the only Clemson back other than CJ Spiller to post over 100 reception yards in a game. Etienne’s electric 72-yard run in the third quarter was just what the Tigers needed to put the Canes away, making it 28-10 after 3 straight stops by the defense. He was also a big reason the Tigers were able to convert on third and long. On his first TD of the night, Travis broke Tim Tebow’s all-time record for most career games (39 and counting) with a touchdown. 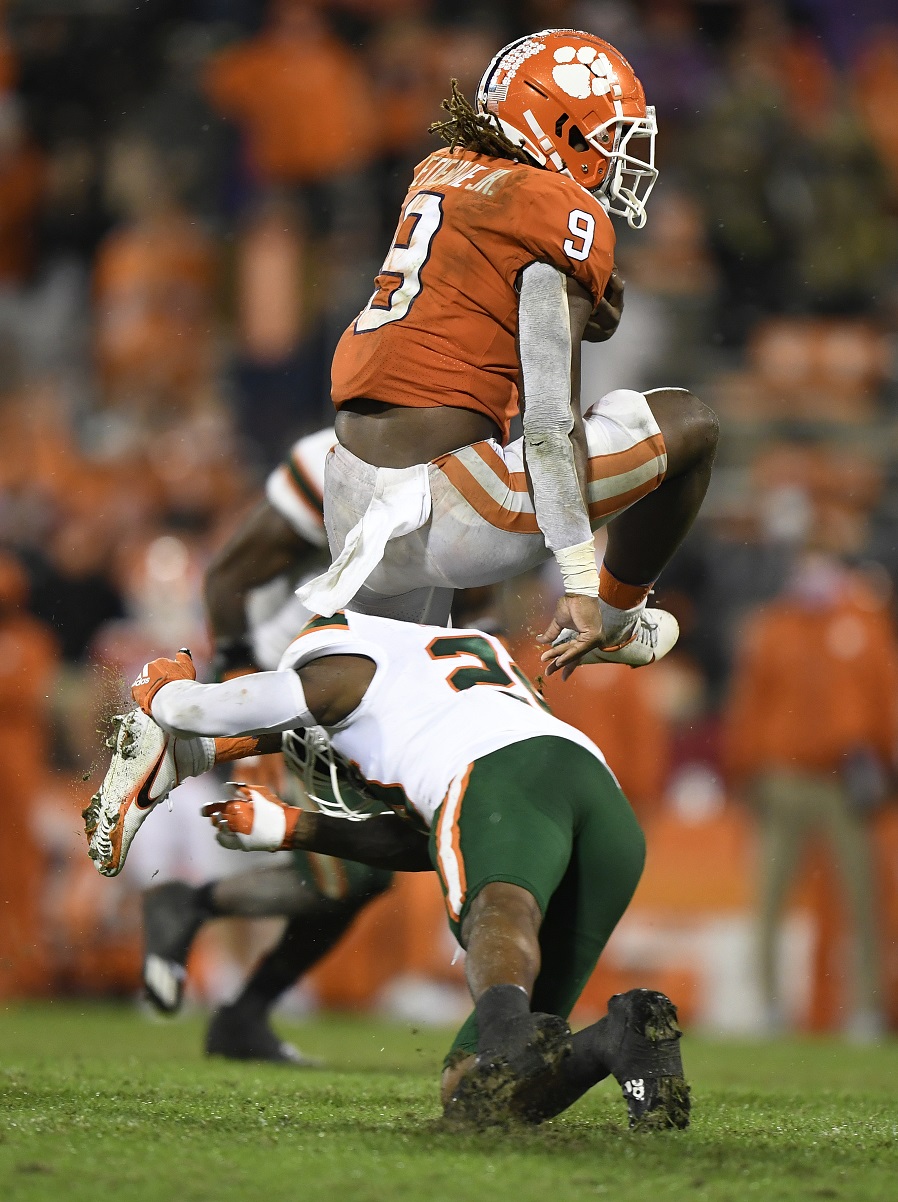 Miami tight end Brevin Jordan came into the game with all the accolades and press, but I wrote in my preview that I expected the Tigers’ tight ends to have a big impact on the game. Sure enough, they scored 3 touchdowns for the first time in Clemson history after going two games without a TD. Braden Galloway scored the first TD of the game on the Tigers’ opening possession—it was the same TE throw-back play they ran with Jordan Leggett at Miami in 2015, in which the offensive freezes and then becomes a convoy for the tight end—and became the first Tiger TE to score 2 touchdowns in a game since Jordan Leggett in 2016. Galloway hadn’t previously scored a touchdown since his career first in 2018. Davis Allen added his first career touchdown in the fourth quarter for the Tigers’ final score. 3 of the Tigers’ 5 tight ends have now scored TD’s in the first 4 games. JC Chalk caught his first career touchdown in the opener for the Tigers’ first score of the season. 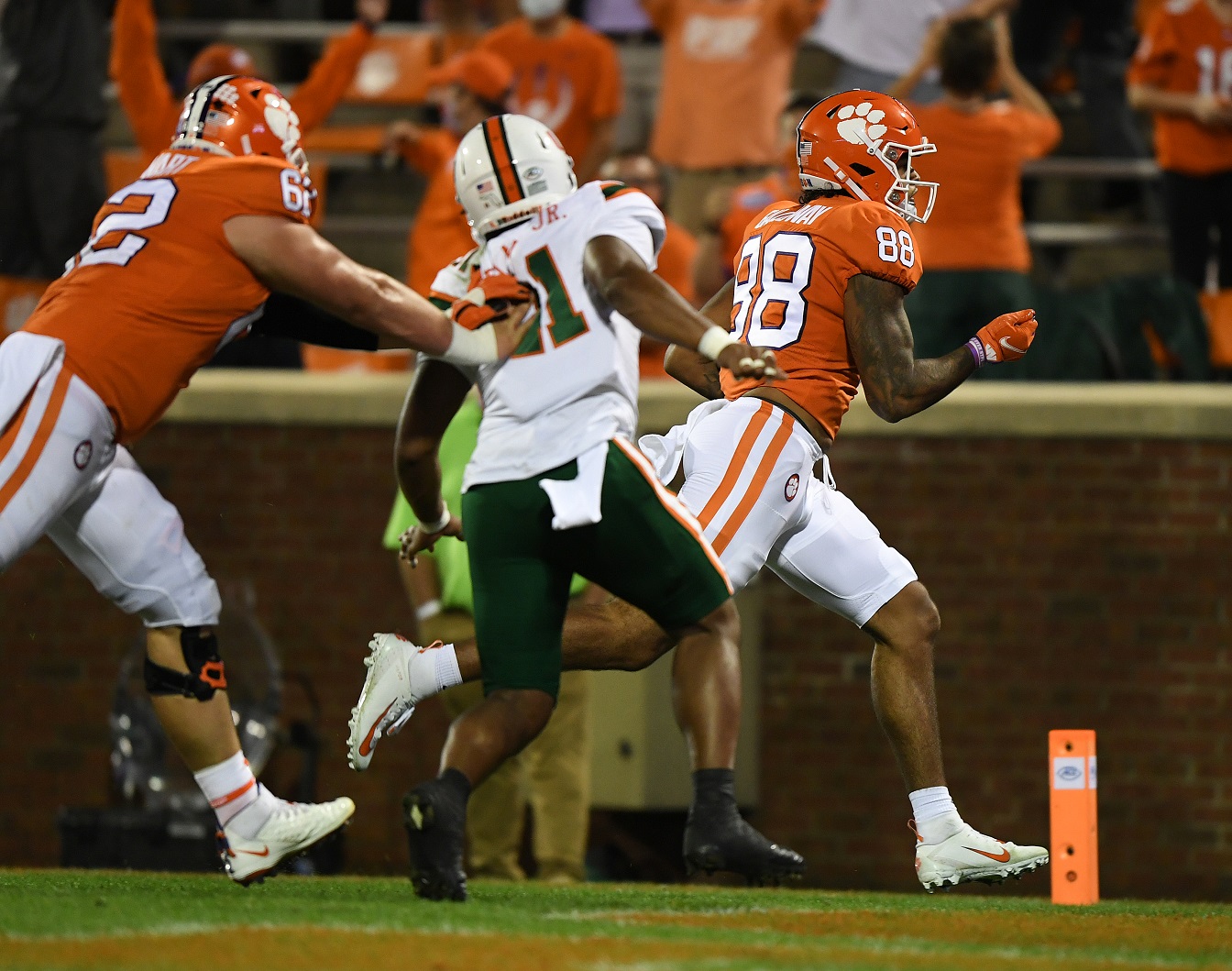 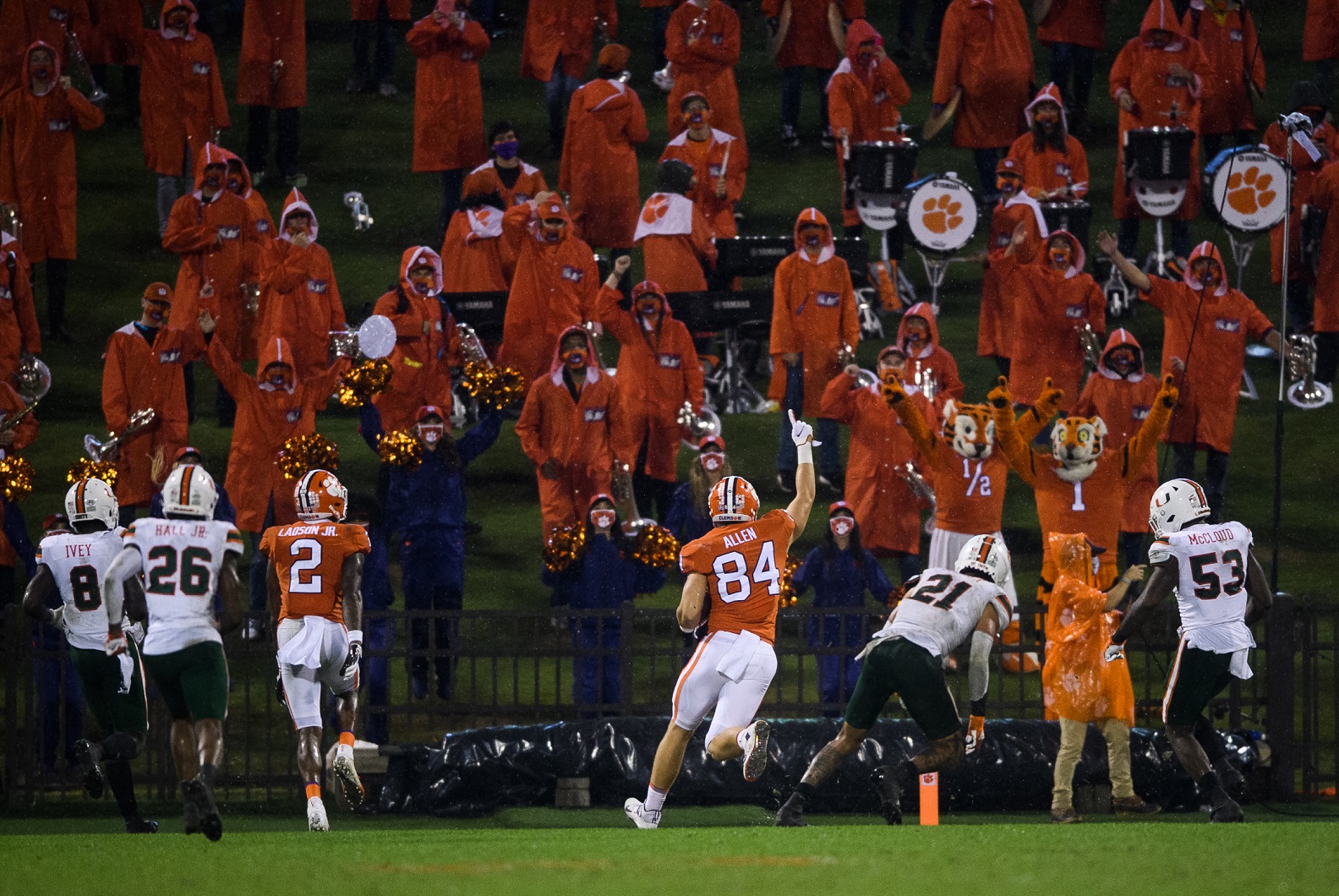 As for the receivers, Amari Rodgers was Mr. Reliable again for the Tigers, catching 7 passes for 62 yards, and he was big on third down. Miami native Frank Ladson had the big touchdown drop but redeemed himself soon after with a 31-yard catch on third down and finished with 3 catches for 43 yards. Joseph Ngata dressed again, but for the third straight game did not record a catch. It’s scary to think of how dangerous this offense will be when he is back in the mix! Brannon Spector and Cornell Powell combined for 5 short receptions.

As good as Trevor and Travis were, the story of the game had to be the Tigers’ defense. I wrote in my preview that I thought they would come out with an edge and a chip on their shoulder because they were sick of listening to fans gripe about the 23 points they gave up to UVA last week, and the edge was certainly there from the moment they ran down The Hill! On the very first Miami play from scrimmage, Baylon Spector sacked the elusive D’Eriq King. Spector would sack King again on third and 10 to force the first of 7 Miami punts. The Canes had allowed just one sack per game coming into the contest, and the Tigers would finish with five. In addition to Spector, Justin Mascoll, Jake Venbles, Nyles Pinckney and Myles Murphy would also contribute to the sacks. Mascoll recorded his first career sack last week against UVA and repeated the feat on Saturday night. The Tigers had 11 tackles-for-loss and forced 7 three-and-outs. They had 3 interceptions—all in the second half—and a turnover on downs. After no interceptions in the first 2 games, the Tigers’ young secondary has 5 in the last 2 games. In addition to the first career pick by Sheridan Jones, Kane Patterson made the first of his career and DK added another. The Tigers also won the turnover margin for the second straight game. The defense allowed just 10 points—7 came from the blocked field goal—and the Canes’ only offensive touchdown came with 8:30 left on a fourth and goal from the 7 yard line. The Tigers nearly prevented that score as well. It was a masterful 60-minute performance by Brent Venables and his defense against a team that was clicking on offense, averaging 42.3 points per game. Miami averaged 499 total yards per game, and the Tigers held them to 210. Cam Harris came into the game averaging over 100 yards per game and 8 yards per carry. The Tigers held him to 3 yards on 8 carries! Getting Tyler Davis back on the defensive line after missing the last two games was big, and Xavier Thomas even got into the game late. He should get to play quite a bit at Georgia Tech next week as he tries to work his way back to 100%. 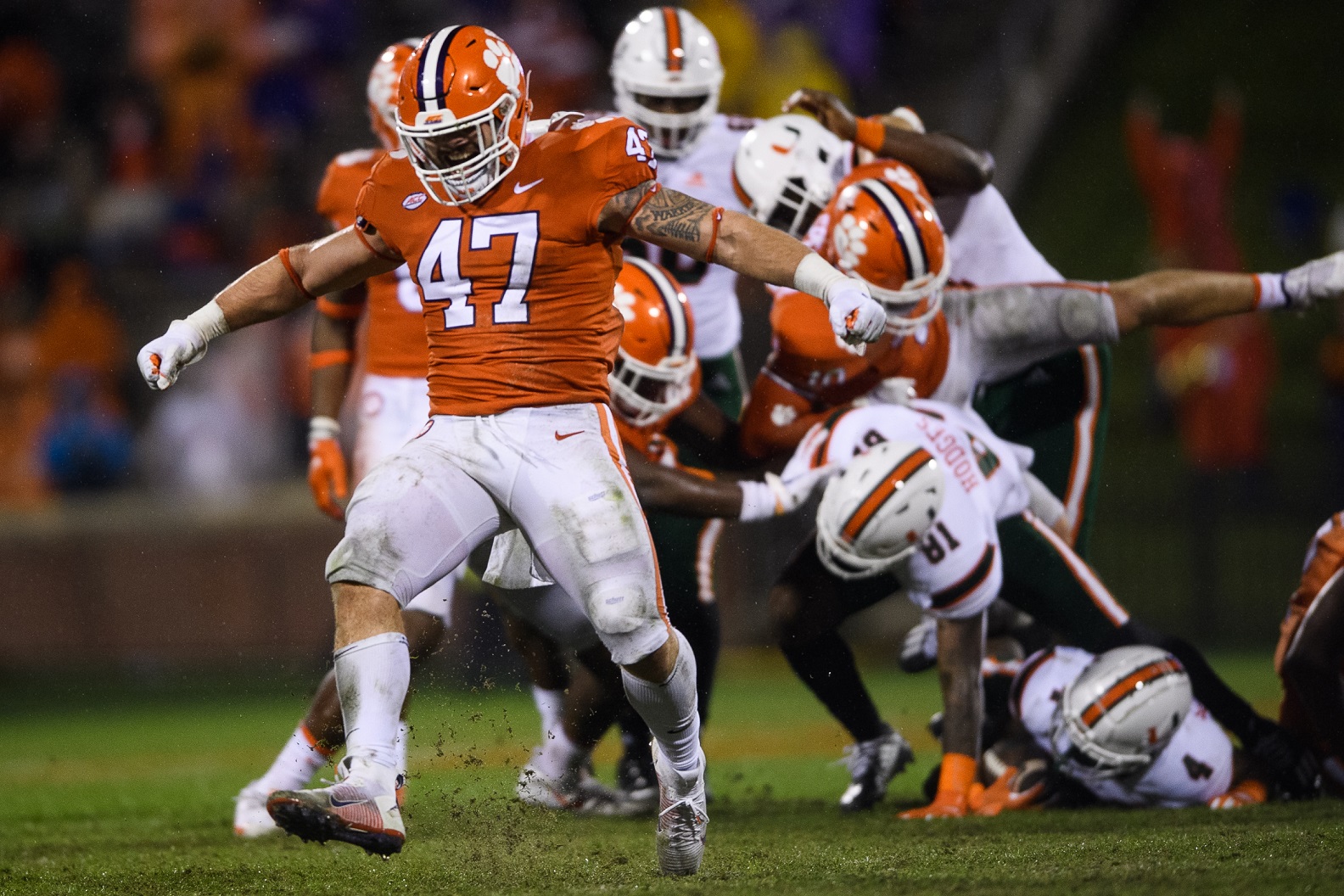 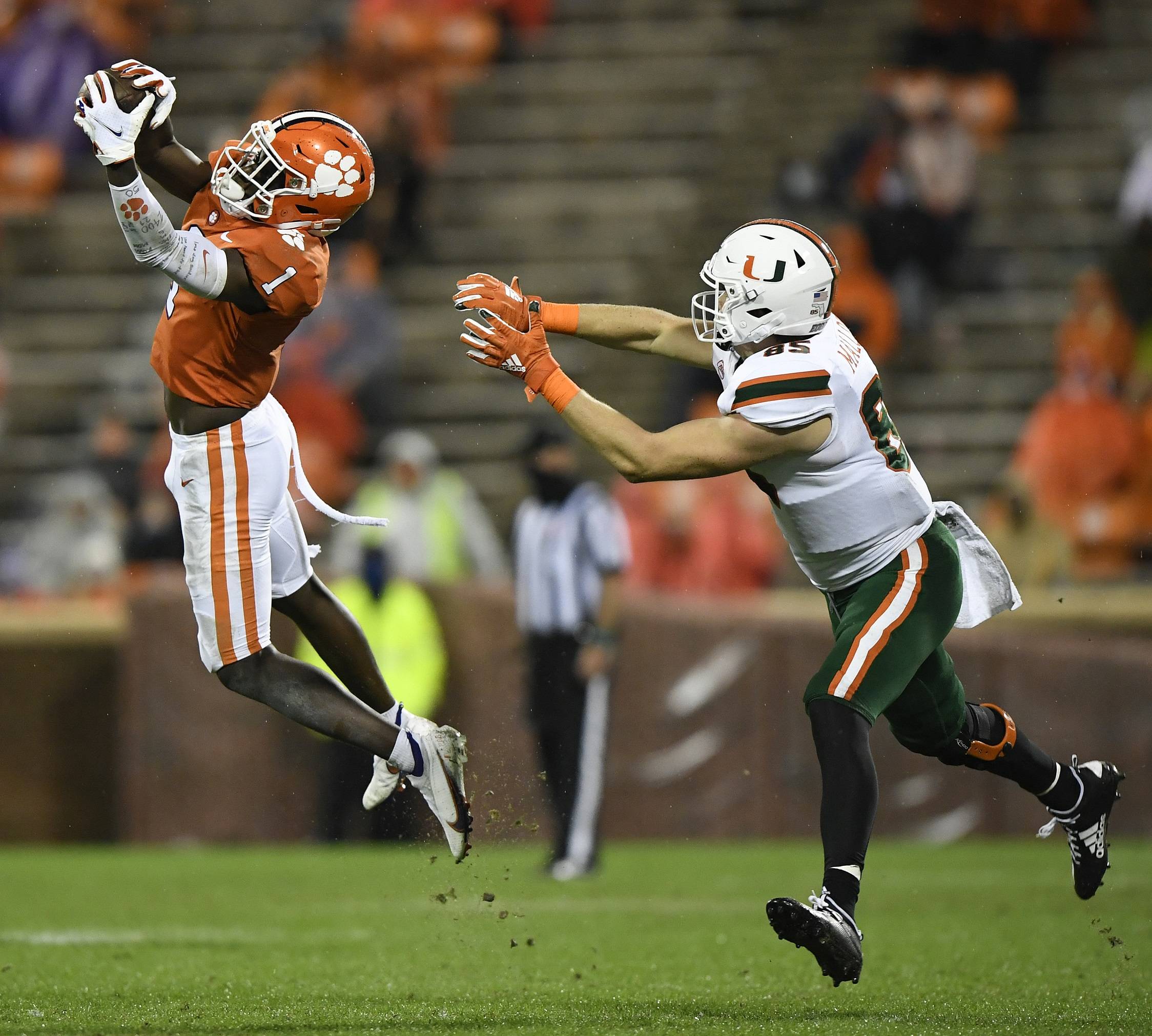 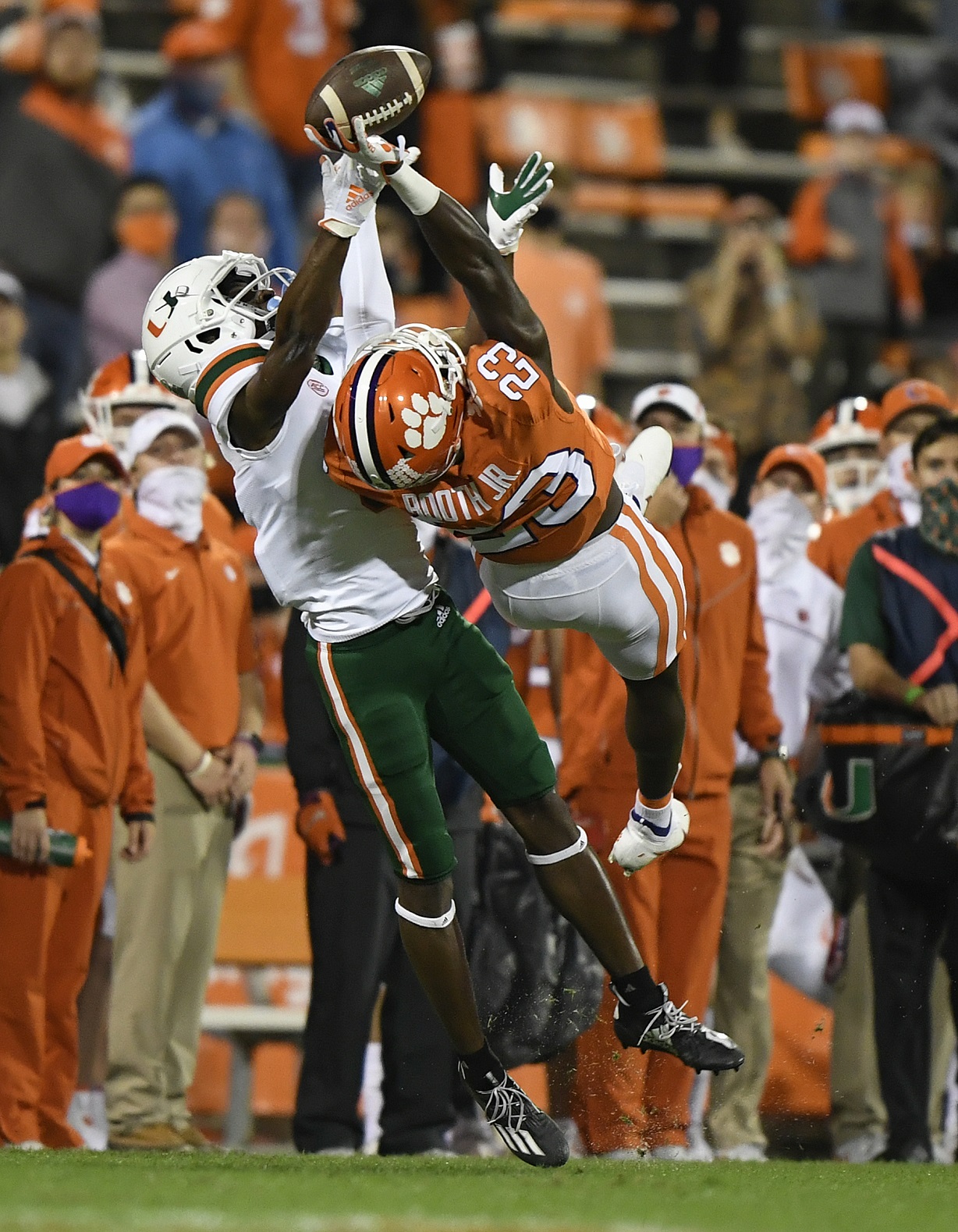 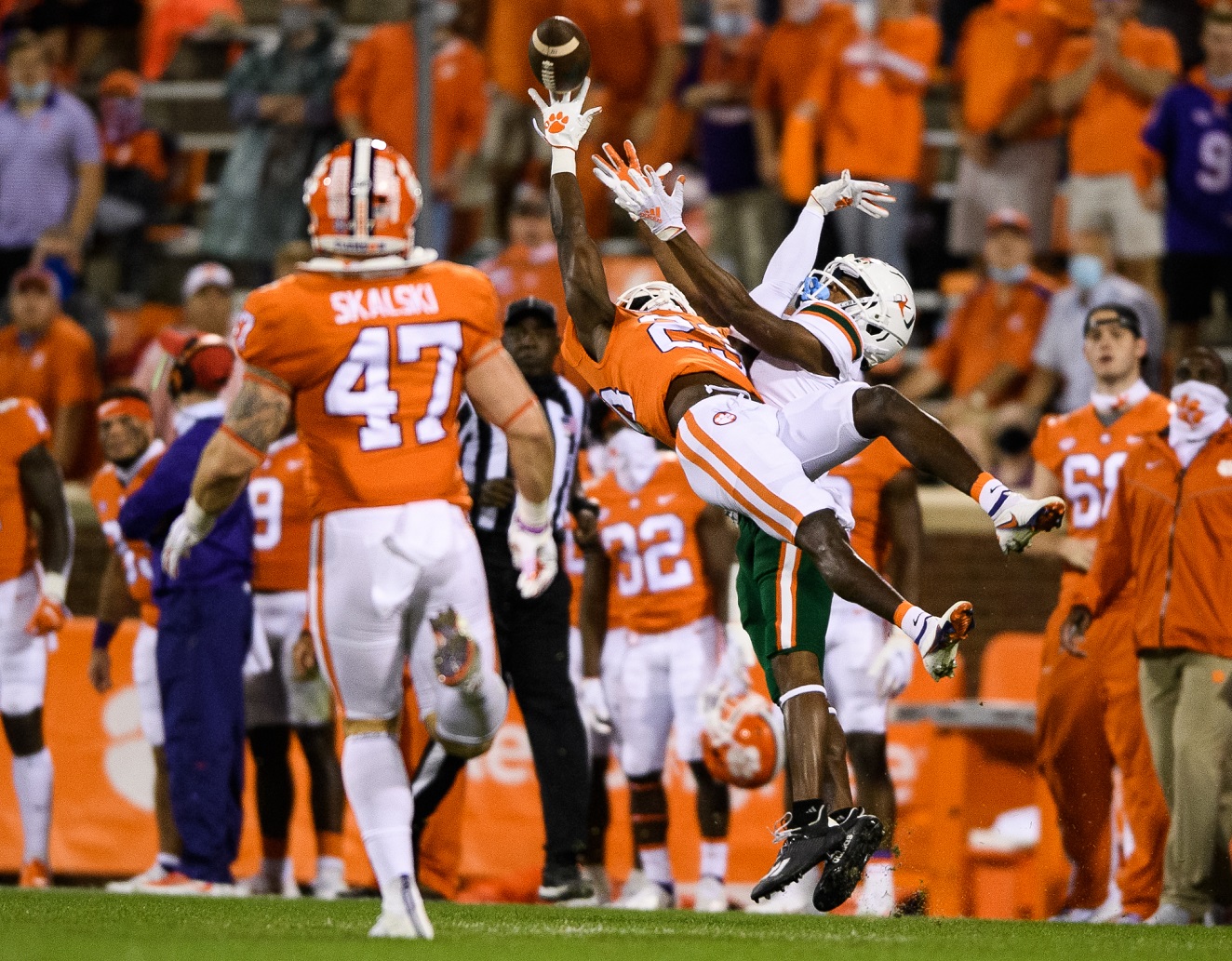 The only negative for the Tigers, of course, was the kicking game. Potter was 4-4 on field goals coming into the game, including a 52-yarder, but had all 3 of his attempts blocked by the Canes. Fortunately, it didn't hurt the Tigers, and they will make the necessary adjustments in practice this week.

The Tigers are now 6-6 all-time against the Canes, winning the last 3 meetings 138-20. Four of those wins were against top-10 Miami teams. The Tigers have won 25 straight ACC games, 25 straight home games (longest active streak in nation), 36 straight non-playoff games (tied with 1985-88 Miami for fourth-longest streak ever) and 47 straight Saturday games (longest streak ever). They will travel to Atlanta next week for a noon kickoff with Tech, which upset Louisville on Saturday. As always, we’ll have our Sunday evening conference call with Dabo, so click the link below for audio!