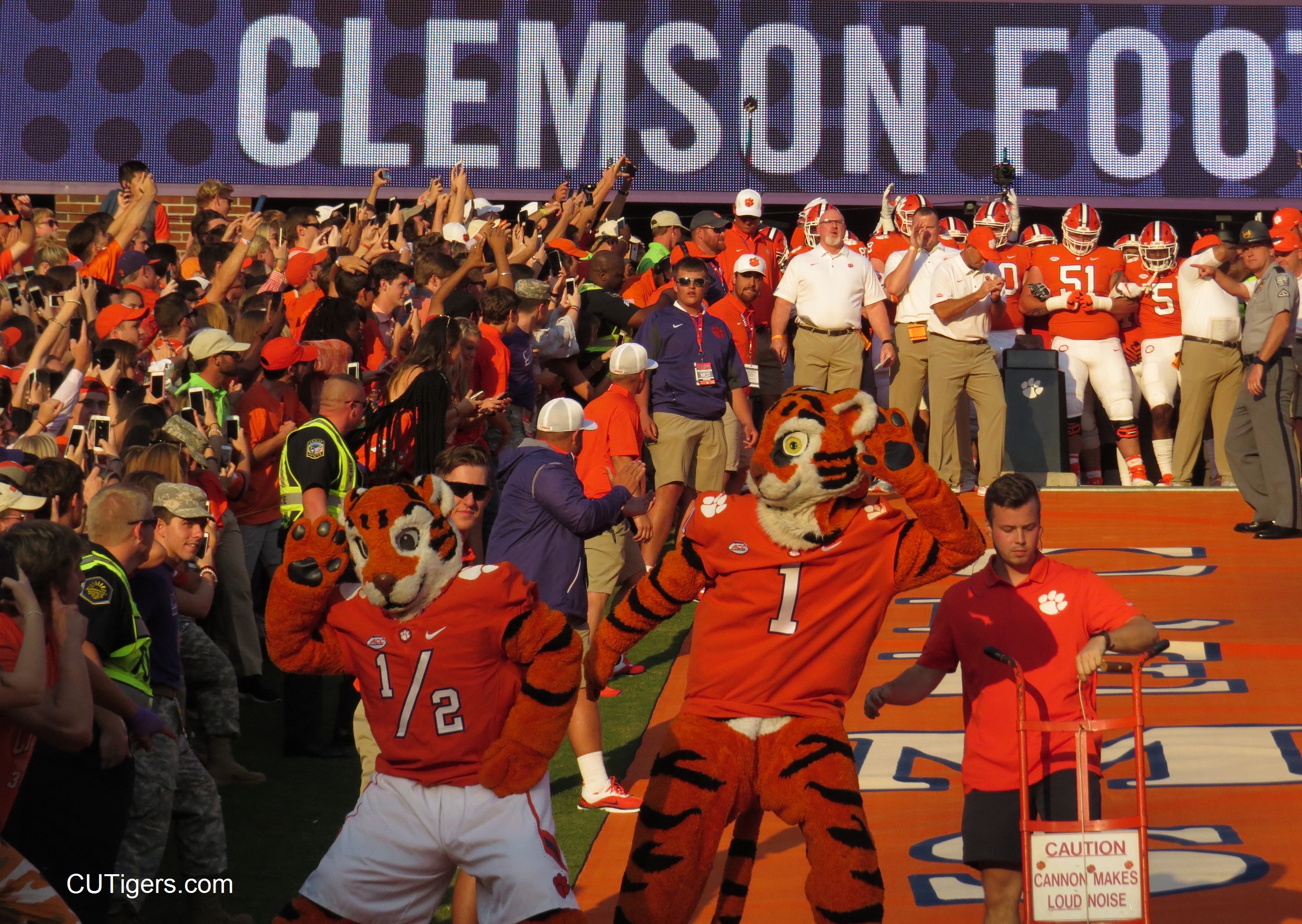 
WHAT WE ARE HEARING: PREVIEW & PREDICTION FOR NO.1 CLEMSON AT GEORGIA TECH

No.1 Clemson has emphatically cleared its biggest early hurdle with a dominant 42-17 win over No.7 Miami that really wasn’t even that close. The Canes scored their only offensive touchdown with 8:30 left on fourth down, and the Tigers ran out the clock on the Canes’ one-yard-line. The Tigers also had a dropped TD pass and 3 blocked field goals—one returned for a TD—so the score could have easily been 59-10 or worse. It was a wake-up call for Miami, the ACC and the rest of the nation that Clemson is still on another level. The game was billed as a showdown between two Heisman candidate quarterbacks, but the Tigers likely ended D’Eriq King’s campaign and announced with authority that they have the top two Heisman contenders in Trev & Trav. Trevor extended his streak without an interception, and Travis broke Tebow’s record for most career games with a touchdown. Many Clemson fans questioned the Tigers’ defensive effort against UVA—even though 23 points isn’t a lot in today’s game—and, like I predicted, the defense came out with a chip on their shoulder and suffocated Miami all night. It would have been an amazing performance against anyone, let alone one of the top offensive teams in the nation coming into the game. I also predicted that the Clemson tight ends would make a big impact, and they scored 3 touchdowns for the first time in program history. The Tigers are now 6-6 all-time against Miami and have won the last 3 meetings by a combined score of 138-20!

With Miami in the rearview mirror, the Tigers set their sights on old, familiar foe Georgia Tech and a noon kickoff in Atlanta. This was supposed to be the season opener but was moved back when the ACC schedule was reshuffled due to the pandemic. On to the matchup!

This is the 125th season of Clemson Football….The Tigers look to win at least 10 games for the 10th straight year under Dabo Swinney, joining Alabama and Florida State as the only programs ever to do so….Clemson is the only program to have won 5 consecutive outright ACC titles and the only program in the nation to win 5 consecutive conference championship games….If Clemson goes 14-0 this season (they play one less regular season game than normal), the senior class will tie last year’s group at 55-3, the best record of any senior class in history….At 73-5, Clemson has the best record in the nation since 2015; 4 wins better than Alabama and 12 wins better than Ohio State. Clemson is 2 wins behind Alabama for the most wins since 2011….Clemson has the most wins versus Power Five opponents since 2013; 10 more than Ohio State and 8 more than Alabama….Dabo now has the nation’s best active win percentage at .812. Nick Saban’s is .790. Dabo also holds the best all-time win percentage in ACC games at .833. Bobby Bowden’s was .813….Only 6 times has a team won 12 or more games in a season against Power Five opponents. Clemson, FSU and LSU are the only programs to have done it, and 4 of the 6 times were by Clemson, which remains the only program ever to win 13 games against Power Five opponents in one season, accomplished in 2018…..Dabo Swinney and Nick Saban are the only head coaches in history to reach No.1 in the AP Poll in 6 consecutive seasons….Clemson has played in the 15th most games as AP No.1. If the Tigers remain No.1 until the National Championship Game, they will pass Michigan for 12th most games played as No.1….Dabo is tied with Notre Dame legend Ara Parseghian for 19th most games coached as AP No.1, one shy of Steve Spurrier. If the Tigers remain No.1 until the National Championship Game, Dabo will tie his childhood hero Bear Bryant for 9th most games coached as No.1. Dabo is the only multiple recipient of the Bear Bryant Coach of the Year Award, winning in 2015, 2016 and 2018….Clemson and Alabama are tied for the most consecutive weeks in the AP Top 10 at 82 weeks, passing Florida for the third-longest streak all-time. Clemson has been ranked in the AP Top 5 for 45 consecutive weeks, by far the longest active streak and tied with Nebraska for seventh-longest streak all-time. The next-longest active streak is Georgia at 12 weeks. Ohio State had 14 consecutive weeks before their exclusion due to the Big Ten’s season postponement. If Clemson remains in the Top 5 all season, it will pass Miami for the second-longest streak all-time. If the Tigers remain in the Top 5 from now until the ACC Championship next season, they will pass Alabama for the longest such streak all-time….Clemson’s run of 5 straight top-5 finishes is tied for the sixth-longest streak all-time. One more, and the Tigers will tie Oklahoma; two more and they will tie three other schools for the second-longest streak. FSU has the record at 14 straight top-5 finishes under Bobby Bowden….If Clemson finishes in the top 2 of the AP Poll this season, it will join Miami as the only programs to finish in the top 2 in 5 of 6 seasons…..Clemson and Alabama are tied for the most consecutive 12-win seasons (5) since Penn in 1892. One more would move Clemson ahead of Alabama, which won 11 games last season….Clemson has won 26 straight home games dating back to 2016, the longest active streak in the nation. Only 9 fifth-year seniors on the 120-man Clemson roster have experienced a loss in Death Valley. The Tigers are an FBS-best 43-1 at home since 2014….

The Yellow Jackets are coming off a big home win over Louisville, 46-27 last Friday night. They began their second season in the Geoff Collins era with a 16-13 upset win at FSU but backslid with losses at Syracuse and to No.14 UCF. Anyone will tell you, however, that this is a much better Tech team than it was last year in Collins’s first season. They have more returning players than any team in the nation, and all that experience has made them a competitive team in the ACC.

It all starts with 6’3, 215-pound freshman QB Jeff Simms, who is starting to come into his own. For the season, Sims has completed 54% of his passes for 944 yards, 5 touchdowns and 8 interceptions. However, he was 11-21 for 249 yards with 2 TD’s and no interceptions last week, so he is growing up before our eyes. Sims is also very athletic, averaging 5.7 yards per carry for 251 yards and 3 TD’s this season.

Defensively, the Jackets have 9 sacks on the season and 4 players with 2 sacks each: DL Jordan Domineck, DL Antonneous Clayton, DL Curtis Ryans and DB Charlie Thomas. Tech has recovered 6 fumbles and has 3 interceptions for 9 total turnovers, which is tied for fifth in the nation. However, their offense has turned the ball over 12 times, which is third-worst in the nation. Look out for DB Tre Swilling (#3), son of Tech legend Pat Swilling. He doesn’t have a pick yet this season, but he is the one who gave Trevor Lawrence his first interception in the opener last season and nearly took it for a pick-six. Geoff Collins announced on Tuesday that sophomore DE Sylvain Yondjouen suffered a season-ending injury.

Field goals have been problematic for the Jackets this season. Their kickers are a combined 1-5 with a long of 32. However, Tech has one of the best punters in the nation in senior South Carolina native Pressley Harvin. He looks like a linebacker or Jerome Bettis, but he has a heck of a leg and gets great hangtime on his punts, so punt returns will likely be few and far between for the Tigers on Saturday.

Watch what the Tech coaches had to say about Clemson below!

Despite the monster win over No.7 Miami last week, the Tigers made plenty of mistakes that they have spent the week addressing—most notably the field goal protection unit, which allowed blocks on all three of Potter’s attempts against the Canes. Dabo told me on Wednesday that they have worked hard all week to shore that up, and we shouldn’t see any blocks on Saturday. Potter was a perfect 4-4 on field goals in the first 3 games.

The Tigers are in great shape from an injury standpoint. They got Tyler Davis back last week, and boy what a difference he made against Miami. Xavier Thomas also got in late for 3 plays at the end of the game, and we should see more of him on Saturday. The big question on offense is when we will see Joseph Ngata back to his old form. After 3 catches for 48 yards in the opener, he has not recorded a catch in the last 3 games. The offense has still managed to cruise and score lots of points without Ngata, thanks to Rodgers and Ladson making plays in the vertical passing game, but this offense will go to a whole other level when Ngata is 100%.

Defensively, that young, talented secondary is really starting to come together. Dabo said during camp that he thought it was the most talented group of corners he’s ever had, and they are beginning to show it. The secondary has 4 interceptions in the last 2 games (plus one INT by LB Kane Patterson), and two of them were brilliant picks by Andrew Booth and Sheridan Jones in the end zone. We’ve also seen fantastic coverage and PBU’s across the board. Sophomore safety Jalyn Phillips made his first career start last week and was outstanding. Derion Kendrick recorded his first interception of the season last week, utilizing his old wide receiver skills on the diving catch. That group is just going to continue to get better and better.

Be sure to check The Valley forum HERE about 2 hours before kickoff for our final list of unavailable players!

I’ll make this one short and sweet because, frankly, the Tigers just have too much on both sides of the ball for Tech to hang for more than a quarter. Too much talent and too much depth. The Tigers have been among the best in the nation at sacking the quarterback, and Tech is among the nation’s fewest sacks allowed, so it will be interesting to see who wins that battle of strength-on-strength. Tech is allowing just half a sack per game, and part of that is the mobility of Jeff Sims, but my guess is that the Tigers will produce 3-4 sacks.

I expect the Tigers’ offense to continue to hum like a well-oiled machine with Trevor’s pinpoint accuracy in the passing game and Travis making huge plays both in the running and passing game. Hopefully we will see Joseph Ngata looking like himself again and making some catches. The only real question is whether Trevor will break Russell Wilson’s ACC record for passes without an interception before he is pulled out of the game. He needs 25 throws to break it, so it could be close if Trevor doesn’t play much in the second half. Remember, though, he threw 2 INT’s against Tech last year! He also threw one of his four INT’s as a freshman in Atlanta back in 2018, but that was a deflection of his offensive lineman’s helmet. Interestingly, that game in Atlanta was the last game Trevor didn’t start and the one that gave him the starting job. He was brilliant that day, and it was his rope of a touchdown pass to Hunter Renfrow, rolling to his left that made me gasp and still stands out in Dabo’s recollection to this day. I’m looking forward to seeing how DJ runs the offense with more than a full quarter of possessions. Don’t be surprised if we see Tony Elliott break out the jumbo package for the first time this season if the Tigers have a short-yardage opportunity. The question is whether he will give the ball to Bryan Bresee or one of the older players.

On the defensive side, I can’t wait to see which young players step up to make plays and also how Xavier Thomas looks. Expect the Tigers to play just about everyone who makes the trip to Atlanta because this one won’t be close.