ATLANTA, GA - Many wondered whether No.1 Clemson would keep its momentum going with a road game in Atlanta, coming off a GameDay blowout of No.7 Miami in Death Valley last week. The Tigers answered that question and then some, steamrolling Tech 73-7 with a 52-7 lead at the half! What a performance, and the scary thing is that the Tigers had a dropped TD by Ladson and 2 turnovers in the 1st half! They out-gained the Jackets 671-204, and 41 of Tech's yards came on the final play of the game. Heisman front-runner Trevor Lawrence was on fire, going 22-28 for 391 yards and 5 TD's in the first HALF! That's a hell of a game for any Heisman candidate, let alone a half! Ironically, though, his streak 367 passes without an INT ended, just 13 passes shy of breaking Russell Wilson's ACC record. It was his first interception in 363 days.
The defense was as impressive as the offense was. If not for a busted coverage on a long TD pass, they would have pitched a shutout on the road. Other than that, they were just about perfect. They forced 9 three-and-outs, 2 turnovers on downs, 2 fumble recoveries and an interception. Dabo won't be happy about the Tigers' two turnovers--one by each of the Heisman front-runners--but the Tigers still won the turnover margin for the 3rd straight game. 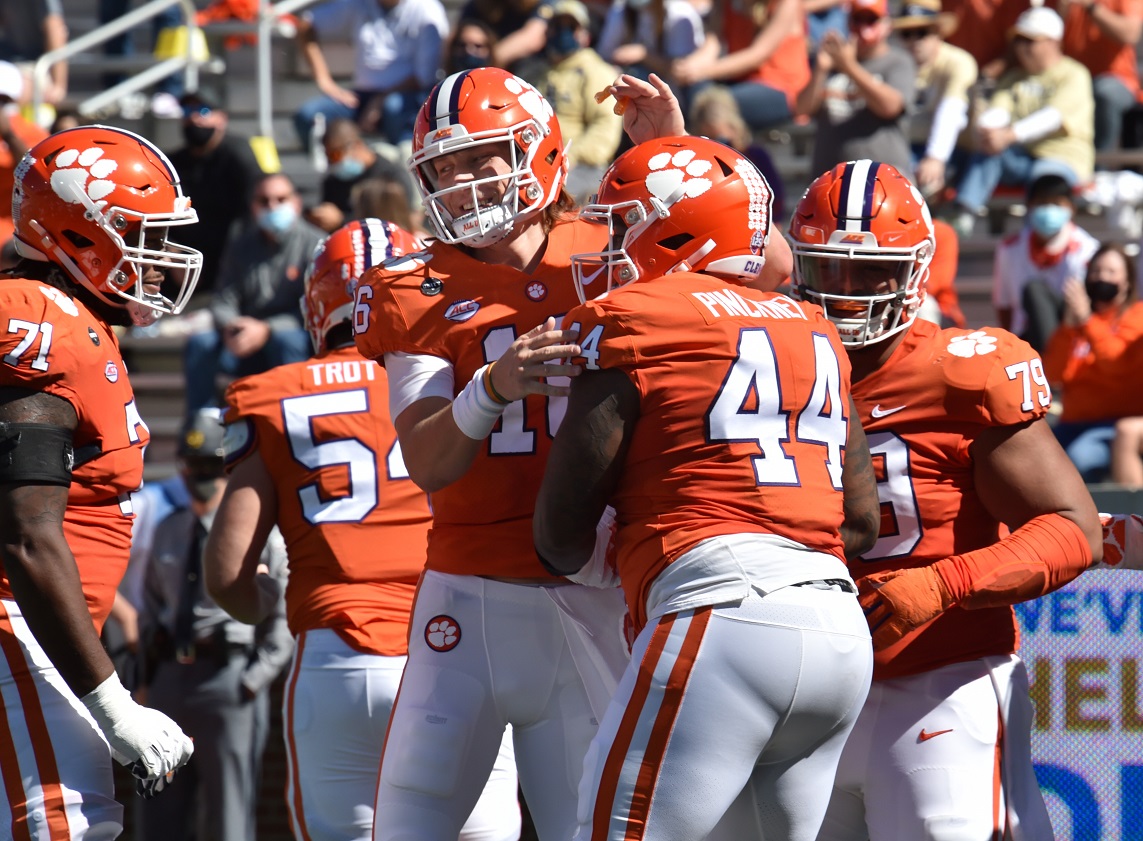 Even DT Nyles Pinckney got in on the scoring! As I predicted in my preview, the Tigers debuted their jumbo package today and executed it to perfection, even tipping it before a timeout by Tech. I thought they would give the ball to one of the older guys rather than true freshman Bryan Bresee on the first run, and sure enough, they faked it to Bresee and handed it to big Nyles for the score.
Dabo said after the game that they held DJ out because he was still a little sore from the Miami game. However, 4th string QB Hunter Helms did a great job, passing for 74 yards and 2 touchdowns! Even punter Will Spiers was 2-3 passing for 13 yards. Taisun Phommachanh went to the locker room in the second half, and Dabo told us after the game that he has a broken bone in his left, non-throwing, hand.
I'll have more in a bit. Post-game interviews, notes and highlights are below!