DJ COMES OF AGE & TRAVIS RUNS INTO RECORD BOOKS AS NO.1 CLEMSON, SHORT-HANDED, SURVIVES 34-28 OVER BC WITH HISTORIC COMEBACK

CLEMSON, SC - WHEW! The biggest home comeback in Clemson history was as stressful as a heart attack, but that was probably the best thing that could have happened for the top team in the country. After falling behind 28-10 for their largest first-half deficit since the 2013 FSU game and largest overall deficit since the 2017 Sugar Bowl against Alabama, the Tigers outscored BC 24-0 to complete the historic rally. Freshman QB DJ Uiagalelei just passed a crash course in doctorate level football, which he needed because he'll be the starter at Notre Dame next week. That's right, as I predicted when the news about Trevor Lawrence broke on Thursday, Dabo announced after the game that Trevor will not play next week in South Bend.
Saturday was a perfect storm for the Tigers. In addition to missing Trevor Lawrence, James Skalski, Tyler Davis and Mike Jones, BC was catching every break imaginable in the first half, and that was some of the worst officiating I've seen since the Ron Cherry days! Those two enormous quarterback roughing calls each negated interceptions that would have been huge momentum plays for the Tigers, and they gave points to the Eagles. The Tigers would have won easily if not for those bad calls, not to mention the 14-point swing on the fumble by Etienne at the goal line. Nevertheless, the Tigers overcame the adversity and pressure to come away with the win. That's why they have the nation's longest active win streak, now at 27 straight, and are 27-4 in their last 31 one-score games. It was also their FBS-record 50th straight Saturday win, 40th straight non-playoff win (3rd all-time) and 28th straight ACC win (2nd all-time). Ironically, the Tigers will have to beat one-time ACC member Notre Dame next week to tie FSU for the longest win streak (29) against ACC opponents. 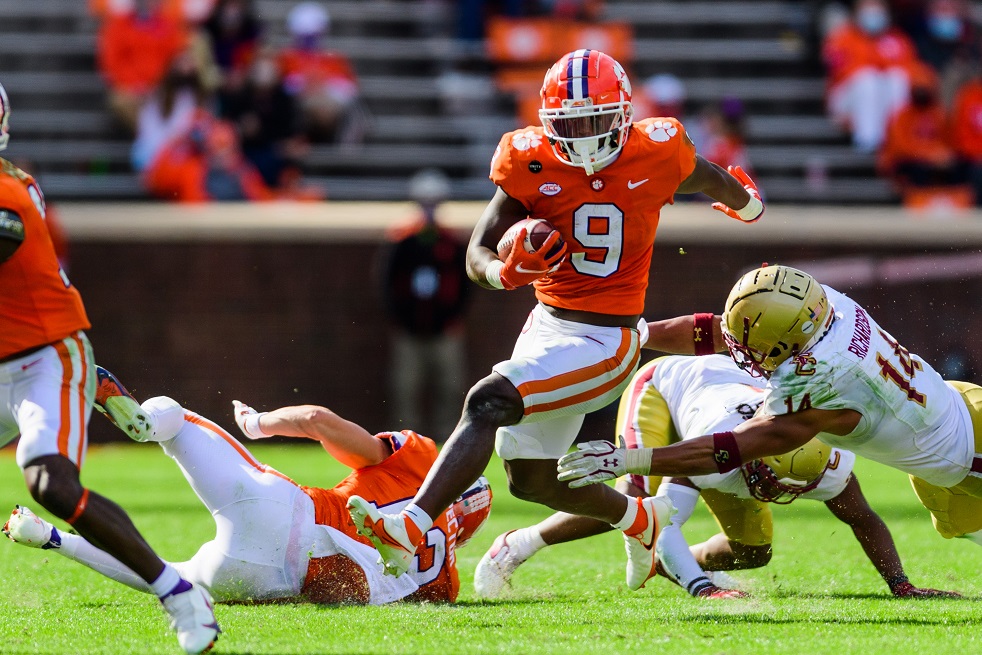 We all knew that with Trevor Lawrence out, the Tigers would have to rely heavily on their other Heisman candidate, Travis Etienne, to take pressure off of DJ, just like he did the last time Trevor was unavailable against Syracuse in 2018. Tony Elliott said after the game that he told Travis exactly that, and did he ever rise to the occasion! Travis racked up 264 all-purpose yards, rushing for 84 yards and 2 TD's with a career-record 140 reception yards. As we all expected, BC loaded the box to stop the run, so Travis had to do much of his damage on pass plays, and that has been the biggest difference in his game this season. We saw him emerge as a pass-catcher last season after tireless work in practice to improve in that area, and he has taken it to a whole other level this season, as he is probably the most prolific pass-catching back in the entire country. This is a guy that couldn't be trusted to catch a screen pass as a freshman! Trevor's lead in the Heisman race may have diminished through no fault of his own, but Travis certainly elevated his stock on Saturday. It was almost an afterthought because of the intensity of the game and the fact that the Tigers were trailing, but Travis broke Ted Brown's 40-year-old ACC record for career rushing yards to a standing ovation in Death Valley and chants of "E-T-N!" One of the great moments I have witnessed in Death Valley, and I only regret that there were only 19,000 fans there to see it in person. Travis also set a new FBS record for most career games (42) with a touchdown. It was originally reported that he broke the record a few weeks ago when he passed Tim Tebow, but the NCAA acknowledged that its records were erroneous and Donnel Pumphrey held the record. At any rate, Travis now holds the record and will tack several more games onto it! 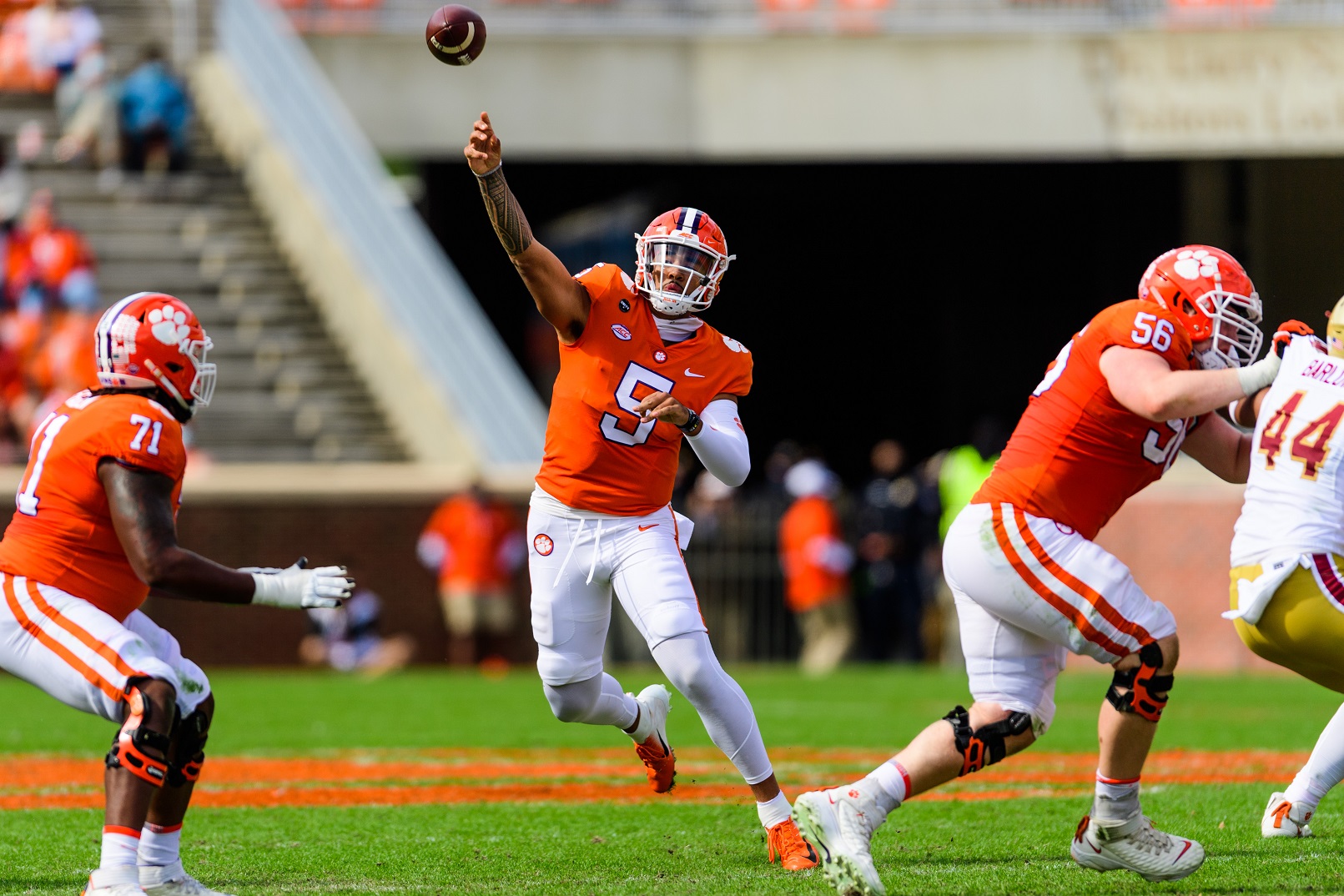 The other major story of the game, of course, was the quarterback play of DJ, who could not have been much more impressive in his first start with all the pressure in the world on his shoulders. He was off target on some throws but also made some great ones and, more importantly, took care of the football. He threw no interceptions and only took one sack, while avoiding several others by scrambling and getting rid of the football. For months, I've written about the fact that DJ seems to exude the same quiet confidence and demeanor of Trevor Lawrence and Deshaun Watson as freshmen, and he demonstrated that with his poise on Saturday. The fumble on the goal line was due to a high mesh point on the exchange, but Travis--being the humble and selfless teammate that he is--took full responsibility for the mistake that cost the Tigers 14 points. Better for that to have happened on Saturday at home than at Notre Dame next week! DJ was an outstanding 30-41 for 342 yards with 2 touchdown passes. He also ran 30 yards for another TD after faking out the entire BC defense on a run-pass option. I was expecting more quarterback power and designed run plays for DJ, but I guess given that BC was loading the box to force the Tigers to pass, and the fact that the Tigers can't afford to have DJ get hurt, it makes sense for Tony Elliott to have called the game the way he did. Elliott said after the game that he really didn't change the play calling at all because of Trevor's absence. Many offensive coordinators would have to do just that in a sudden-change situation with a true freshman quarterback replacing a seasoned veteran with different skill sets, but the Tigers had been repping DJ and Trevor Lawrence equally in practice, so Elliott felt that DJ was ready to run the Tigers' regular offense without having to simplify or modify it. 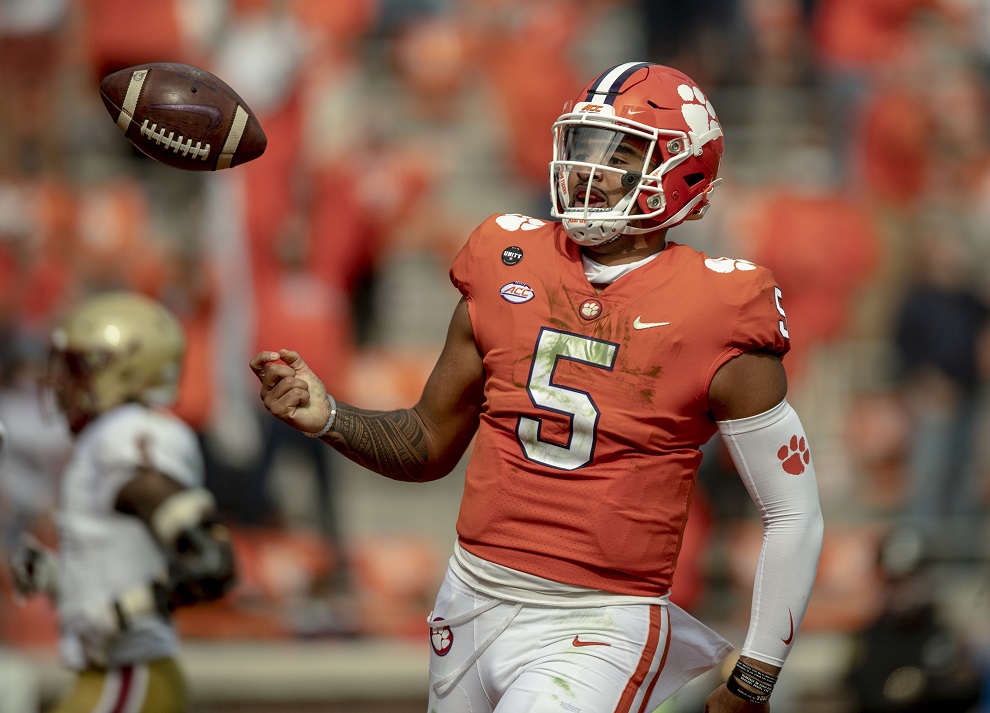 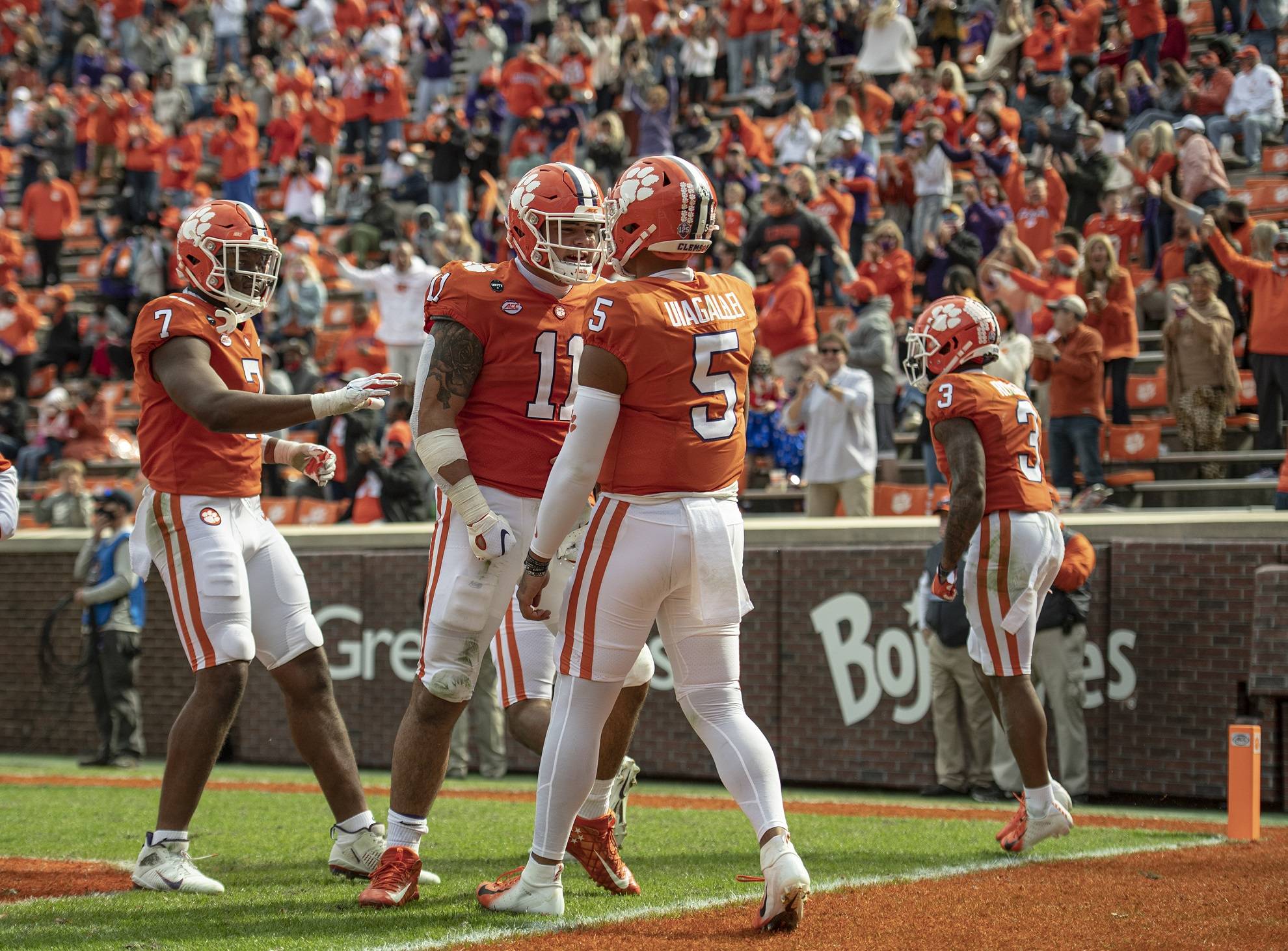 Veteran receivers Cornell Powell and Amari Rodgers stepped up in a big way for their freshman QB, making several critical, highly-difficult catches. Powell finished with 11 catches for 105 yards, and Rodgers had 7 for 66 yards and a touchdown. I expected the tight ends to play a bigger role in the passing game, but Davis Allen and Braden Galloway combined for just one catch for 6 yards and were only targeted once each. Frank Ladson and Joseph Ngata, who's been battling injury, also failed to catch a single pass. It was just about all Etienne, Powell and Rodgers in the passing game, but the Tigers still managed to score 34 and would have scored 41 if not for the fumble on the goal line. That's just 7 points less than their season average with Trevor Lawrence. 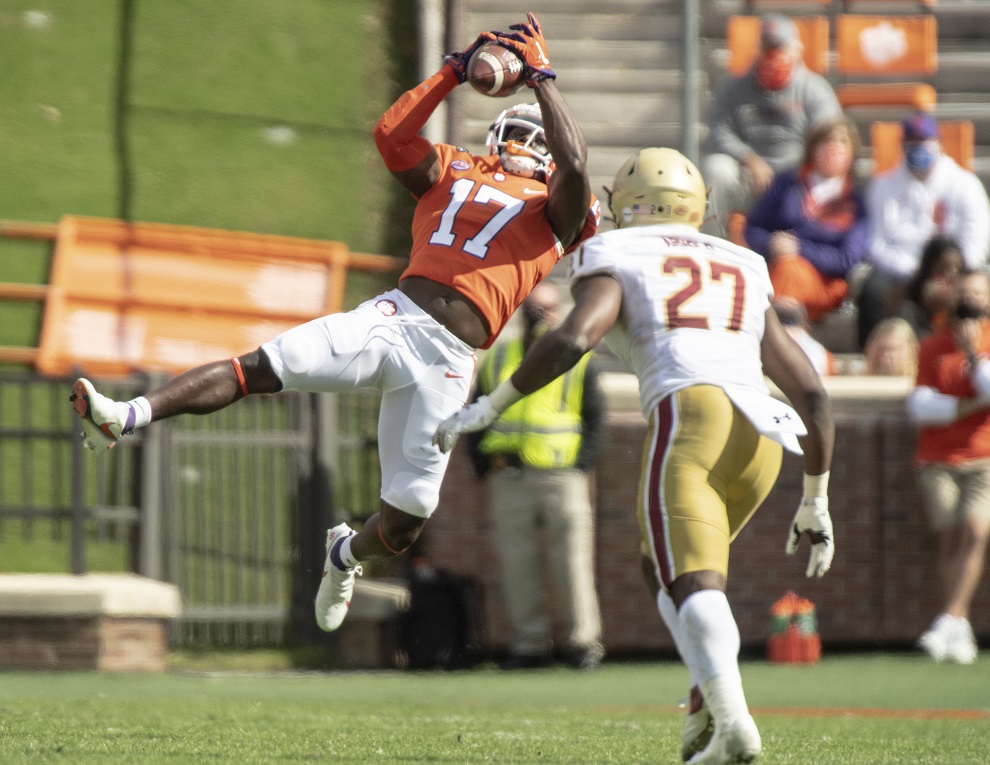 The defense took a gut punch on the Eagles' opening possession, allowing BC to march down the field on 3 big plays for a touchdown. It was the first time the Tigers had trailed all season. I expected the defense to play inspired with Trevor Lawrence out, and they looked anything but early in the game. However, they absolutely played inspired football in the second half and appropriately finished with the game in their hands in the final minute. After Dabo elected to punt on 4th and one at midfield, Spiers landed a beautiful punt inside the BC 5-yard line that rolled out of bounds. That set the stage for an intentional grounding in the end zone, forced by Bryan Bresee, which resulted in a safety and put the game on ice. The Death Valley crowd was as pensive and quiet as could be at the start of the game and most of the first half, but it was as loud as any 19,000 ever was at the end of the game! Despite missing 4 starters, the defense allowed just 21 points and 275 total yards, sacking the quarterback 4 times. And make no mistake: that is a very good Boston College offense that will score a lot of points this season. I wrote in my preview that they were just beginning to hit their stride last week, scoring 48 points against Georgia Tech. It just took some time for them to find their footing with a new coaching staff and transfer quarterback, in addition to the pandemic, but they have an offensive coordinator with a deep NFL background and several big play-makers on offense. All-in-all, it was another great performance by this Clemson defense. Xavier Thomas played his best game this season after missing the first several games. He may not be quite 100% yet, but he is gradually getting there and had a big sack on Saturday. He almost had a second sack and forced an interception, but he was hit with a terrible roughing and targeting call instead and will consequently miss the first half of the Notre Dame game next week. Thomas was mid-air, for Pete's sake, when the quarterback released the pass, so I don't know how in the world the officials justify a roughing call on that unless they expect Thomas to defy the laws of physics and hover in the air mid-flight. If not for the two bad roughing calls, Nolan Turner would have been the only player in the nation with 4 INT's and Spector would have recorded his first. 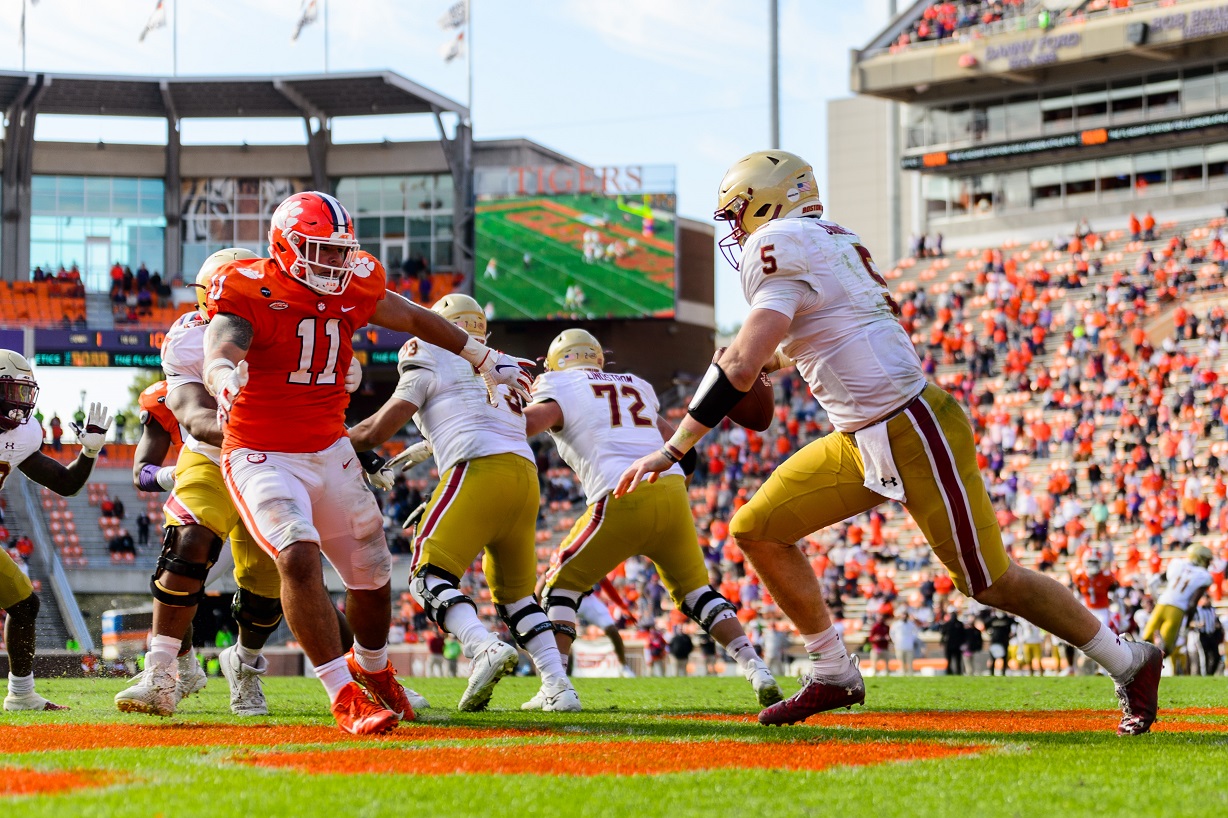 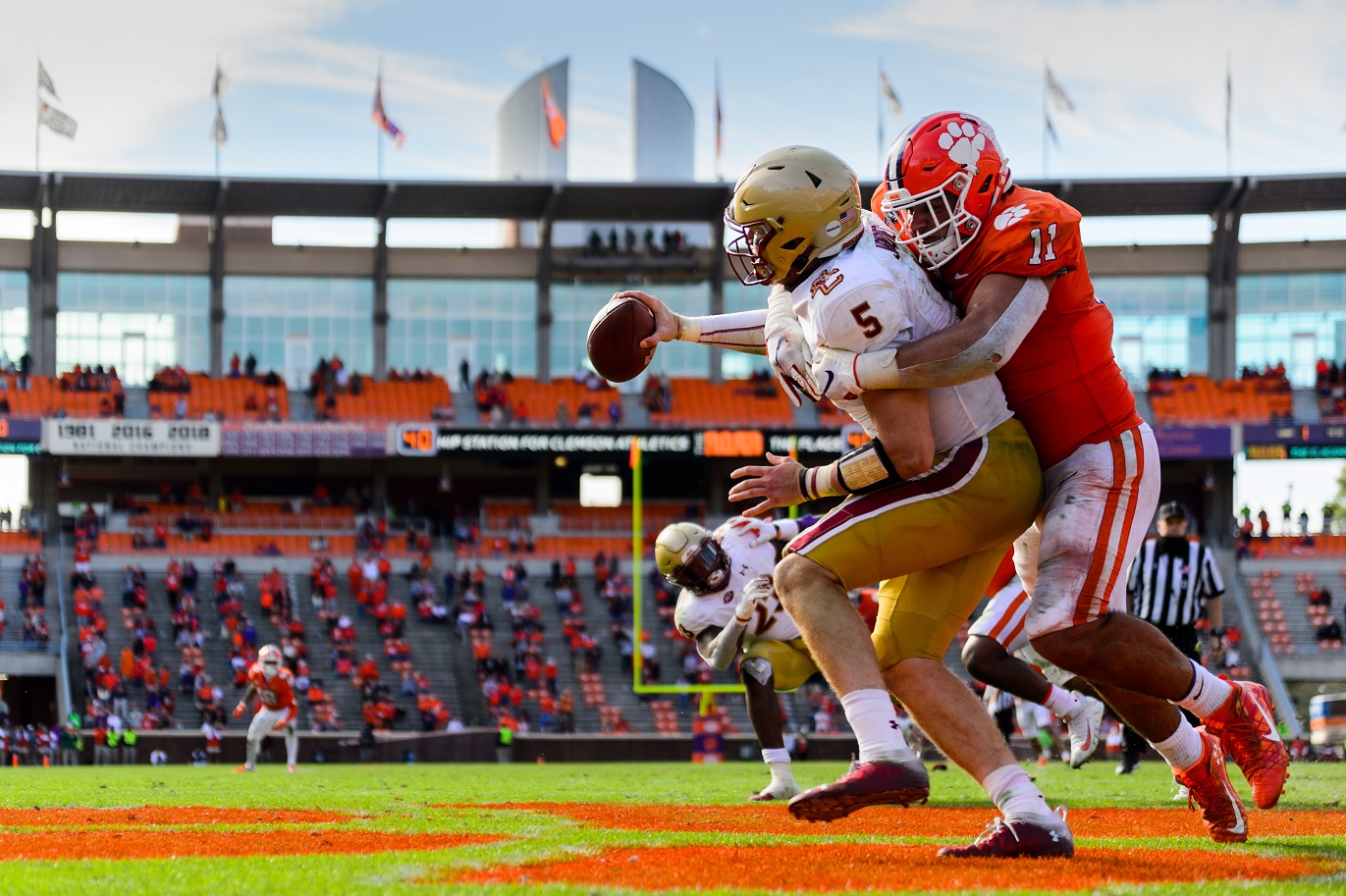 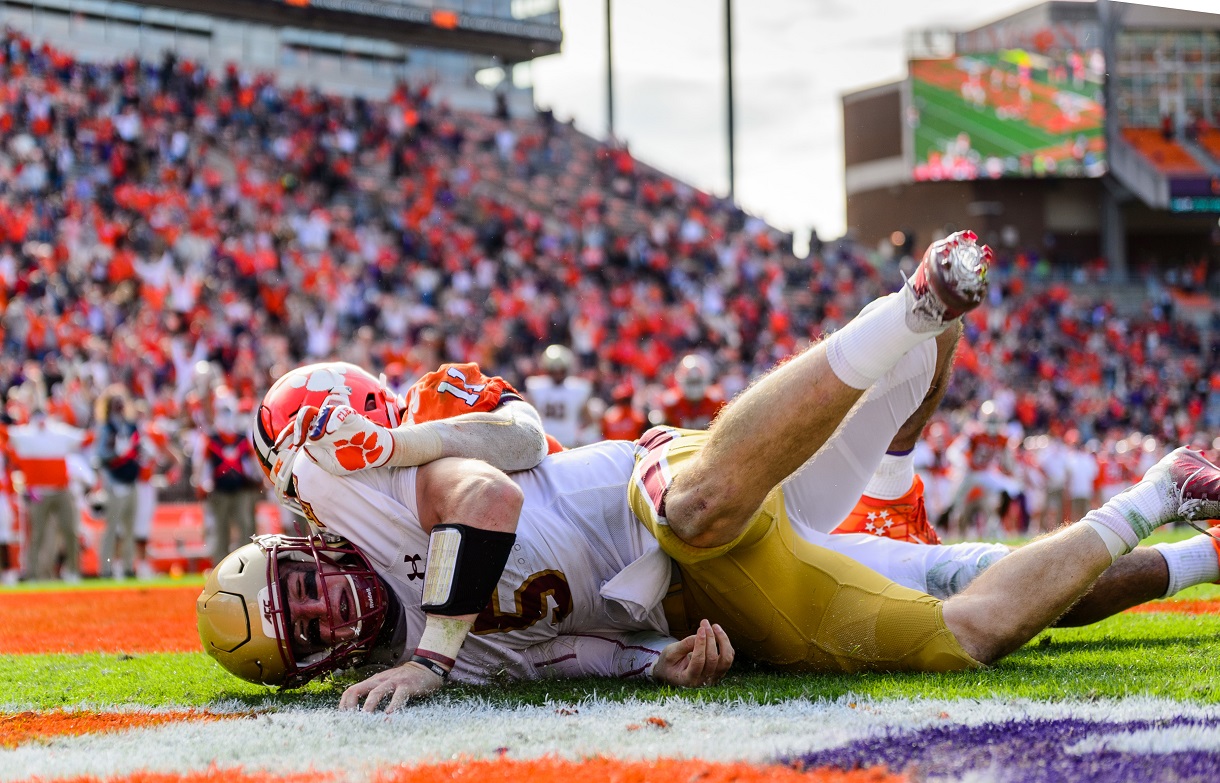 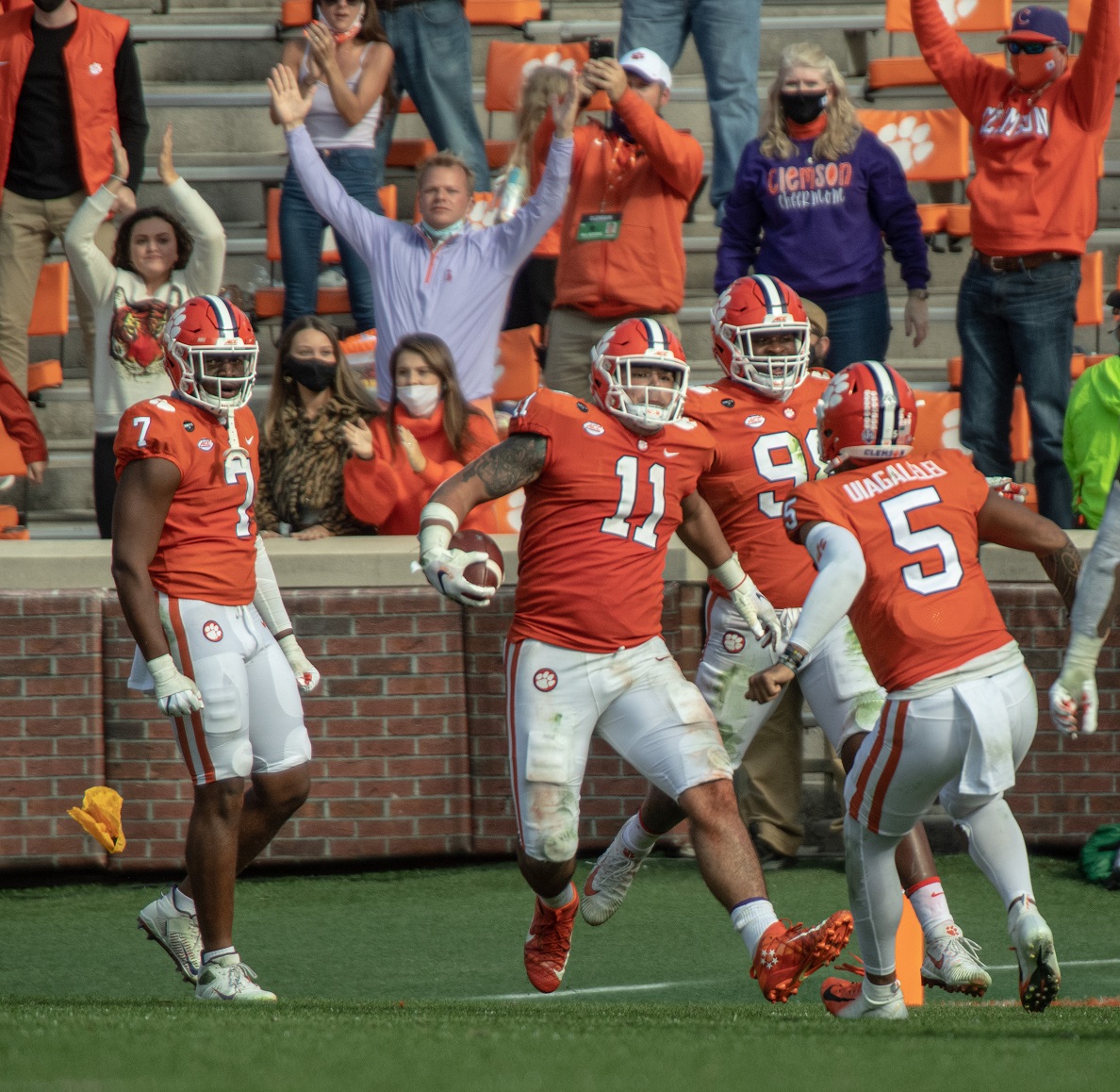 The Tigers' special teams also played a critical role in the win. As mentioned, Spiers set up the game-winning play with his punt to the 4-yard line. He also had a 60-yarder! BT Potter missed a PAT off the upright, but he was 2-2 on field goals, including a much-needed 50-yarder just before halftime to cut the lead to 15 and give the Tigers some momentum at the break. 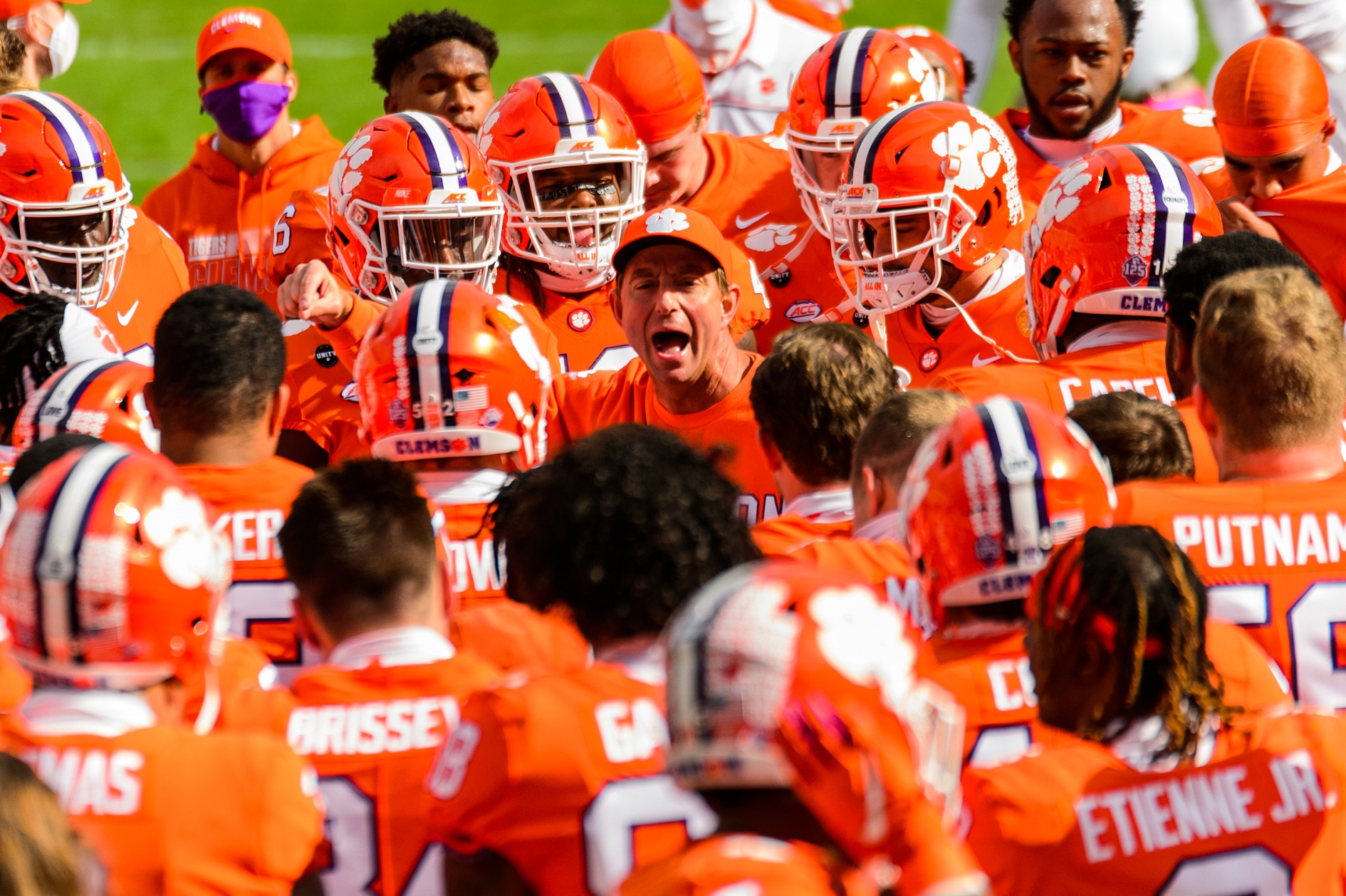 It was complimentary football at its finest, a fantastic team win for the Tigers and a reminder of why Clemson is the No.1 program in all the land. The Tigers won the O'Rourke-McFadden Trophy for the 11th straight year, and Travis Etienne was named MVP. However, in a typical gesture selflessness and leadership, the senior handed the leather helmet over to his freshman quarterback, DJ Uiagalelei, who was equally worthy of it. It reminds me of senior Christian Wilkins buying freshman Trevor Lawrence breakfast when Dabo announced that he would take over as the starting quarterback. That is the kind of culture that Dabo has cultivated lo these many years! Next week, a historic showdown awaits on one of the most historic stages, as No.1 Clemson will face No.4 Notre Dame for an epic ACC showdown and one of the biggest games of the entire 2020 college slate.
Dabo's press conference, notes and highlights are below. Click on the link for more coverage, including post-game interviews, and don't forget to check back for our Sunday evening teleconference with Dabo!
POST-GAME INTERVIEWS HERE