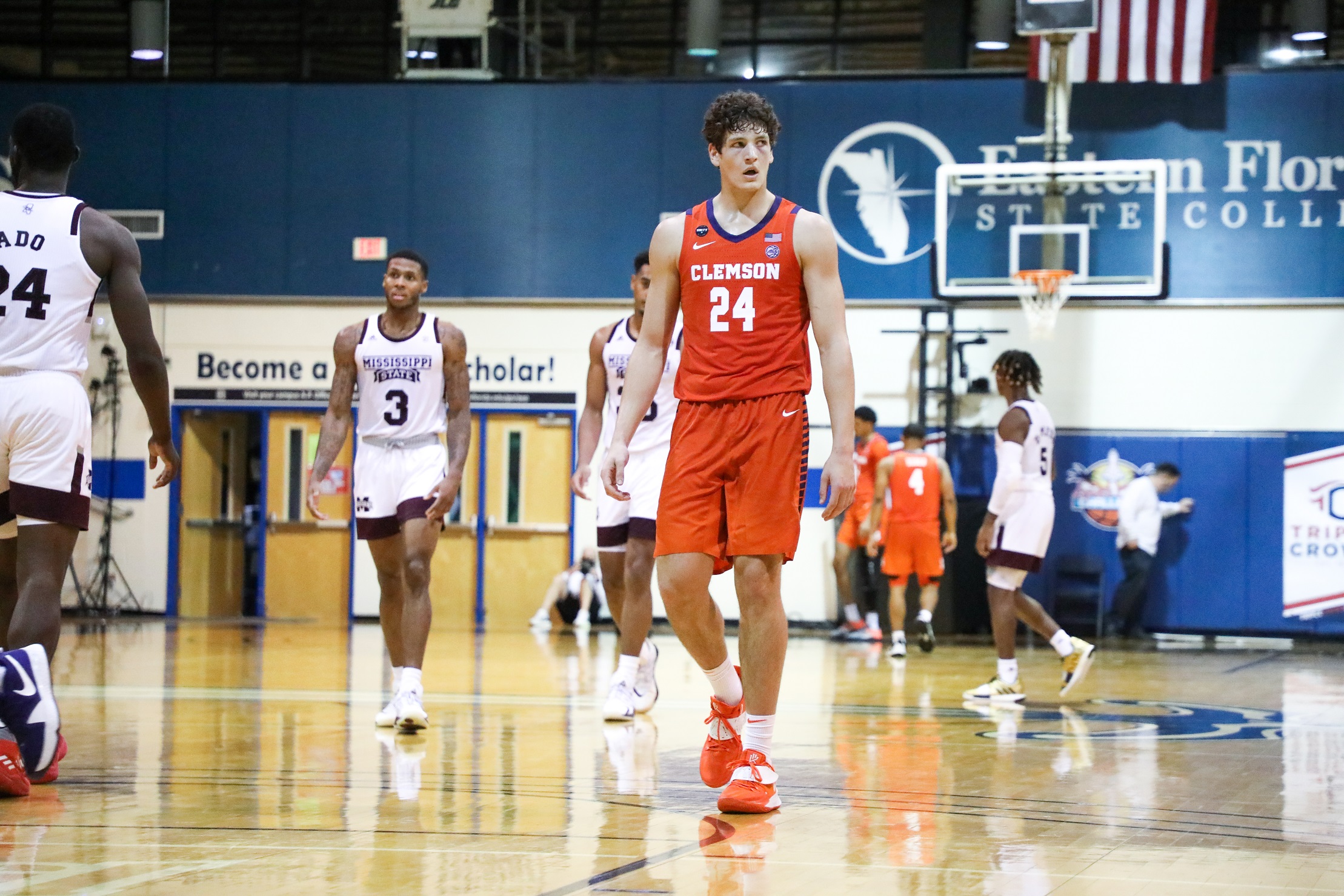 Photo by Trevor Groves CUTigers.com
Brad Brownell and the Tigers started off the 2020-21 season on a good note with a nice season-opening win over an SEC team, especially with Simms scoring just 4 points in 8 minutes! Remember, they didn't have any exhibitions, so double digits over an albeit lower-tier SEC team is a nice start. Freshman PJ Hall was even better than expected in his college debut, scoring 10 points to tie for the team lead with Dawes. The Tigers forced 19 turnovers, and no one played over 26 minutes, which indicates how deep they are this season.
The Tigers will play a big Purdue team on Thanksgiving night at 8:30 ET on CBS Sports Network. Indiana native Brad Brownell's wife is a Purdue alumna. The Boilers have a freshman center, Zach Edey, who is pushing 7'4 and 290 pounds! He scored 19 off the bench in his collegiate debut today, going 9 of 10 from the field with 5 dunks. They have another talented big as well, so it will be a matchup problem for the Tigers in the front court. Simms will have to bring his A game and not what we saw tonight!
Our post-game interview with Brownell and highlights are below!
MELBOURNE, Fla. — Kicking off the 2020-21 season in winning fashion, Clemson rocketed past Mississippi State in the Space Coast Challenge on Wednesday. Ten different Tigers scored on the night, but Clemson's stellar defensive performance made the ultimate difference in the 53-42 victory at Titan Field House.
The Tigers (1-0) shot 35.2 percent from the field, and the Bulldogs (0-1) finished with a shooting percentage of 30.0. Although Mississippi State won the rebounding battle 42-37, Clemson boasted a lead on the scoreboard for 28:30 of gameplay en route to advancing to Thursday's championship matchup. The Tigers amassed 22 points off the Bulldogs' 19 turnovers and benefited from quality bench production that amounted to 26 bench points.
Four players made their Clemson debuts, including freshman phenom PJ Hall, who went 5-of-6 on field goal attempts to go along with his seven rebounds. Hall and Al-Amir Dawes were the Tigers' co-leading scorers with 10 points apiece. In addition to Hall appearing in his first game as a Tiger, fellow freshmen Lynn Kidd and Olivier-Maxence Prosper took part in the season opener. After sitting out last season as a transfer, Nick Honor, who tallied eight points, took the floor for his Clemson premiere and sank two of the Tigers' five 3-point shots. Also of note, Clyde Trapp led Clemson with four assists, and Hunter Tyson pulled down a team-high eight rebounds. Mississippi State's Tolu Smith produced a double-double via his 12 points and 10 boards.
The Bulldogs jumped out to a 7-0 lead before the Tigers reeled off a 20-6 run that was capped off by a Hunter Tyson three-ball at the 4:19 mark of the first half, with Honor supplying the assist on the play. Honor knocked down a trey of his own on Clemson's next possession, and a Chase Hunter free throw in the final minute of the half culminated in the Tigers leading 26-19 at the intermission.
Early in the second half, Mississippi State cut its deficit to five points but got no closer to Clemson than that, as the Tigers manufactured a 13-2 run over the course of the next 6:18 of play. After going up 46-30, Clemson staved off Mississippi State the rest of the way. Hall snapped a 7-0 Bulldog surge with a jumper at the 3:23 mark, which put the Tigers ahead 48-37, and Clemson fared well at the free throw line down the stretch, coming away with a 53-42 triumph.
On Thursday, Nov. 26, the Tigers will compete against the Purdue Boilermakers (1-0) in the championship game of the Space Coast Challenge. The Thanksgiving Day matchup is scheduled to tip off at 8:30 p.m. and air on CBS Sports Network.
Get the latest news on all things Clemson men’s basketball by following us on Twitter (@ClemsonMBB), Facebook (/ClemsonMBB) and Instagram (@clemsonmbb).
Head Coach Brad Brownell
Opening statement
"I'm really proud of our toughness. Mississippi State's a big, physical team, but our guys fought. We knew if we pressed them a little bit, we'd get them out of rhythm. Offensively, we struggled to shoot. There was nervousness out there and guys excited to play, but this was a great defensive win for our team. PJ Hall gave us some really good minutes, and even Lynn Kidd got in there and gave us six or seven good minutes in the first half."
On Clemson's defensive effort against Deivon Smith
"That was our No. 1 priority in our scouting process was we wanted to press. With Al [-Amir Dawes] and Nick [Honor], we knew we had some guys who could shut [Smith] down. We wanted to swallow him up, and they made it really difficult on the freshman."
On PJ Hall's debut
"He's a space-up shooter. He's comfortable shooting the 12-foot shot as well as the 3-point shot. He played really well. He fought. He hit a big basket late when they were making a good run at us. This was a great experience for him tonight."
MORE CLEMSON COVERAGE HERE