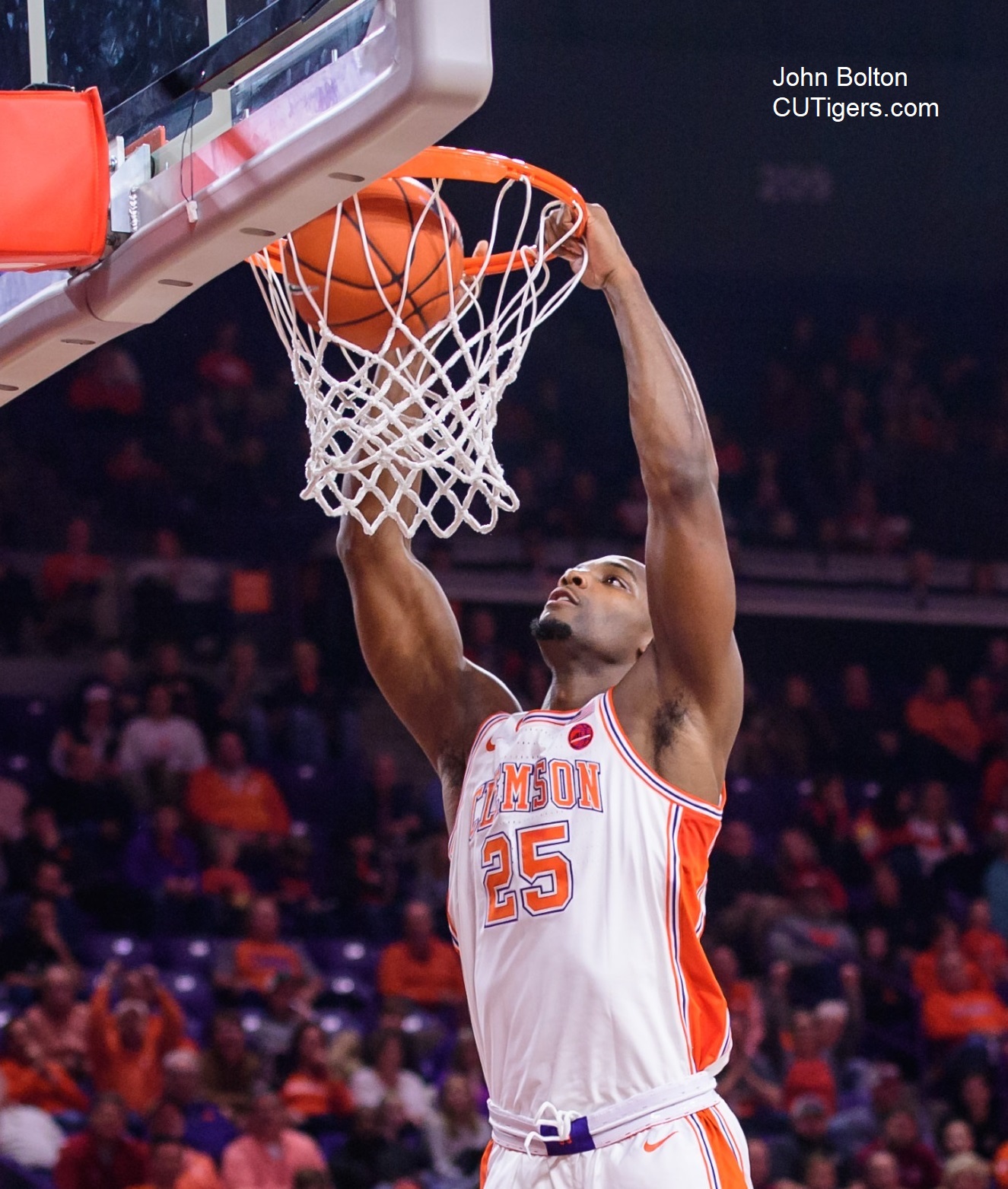 Photo by John Bolton CUTigers.com
After the Tigers beat Mississippi State in the opener, I wrote that Preseason All-ACC First-Teamer Aamir Simms would have to bring his A game in order to beat Purdue, and he did just that after fouling out with just 4 points in 8 minutes in the opener. Simms was sensational on Thanksgiving, scoring 24 points, one shy of his career high, as the Tigers led the entire game and upset Purdue 81-70. It was their second straight 11-point win, and they've already knocked off the SEC and Big Ten. Not bad for a young team with some new faces and no exhibition games! Nick Honor gets "honorable mention" with 17 points. The transfer point guard made four 3's in his first Clemson start and had a couple steals that he converted to points. Dawes started at point in the opener, but those two are going to be interchangeable at the position all season and will also play together at times. Jonathan Baehre, who missed most of last season with a knee injury, had his best game as a Tiger, scoring 11 points and 9 in the second half. He made two 3's and converted a 3-point play when the game was tight in the second half, and those critical scores helped the Tigers to pull away. They led by as many as 15 in the second half. After an impressive debut with 10 points to tie for the team lead, freshman PJ Hall played just 8 minutes against Purdue, but he was 2-3 for 5 points with his first career 3-pointer in that short time. He has an outstanding mid-range jumper and made a big one against Purdue when the game was tight. Hall is really going to help the Tigers this season--especially on the offensive end.
The Tigers' full-court pressure defense was outstanding for the second straight game, forcing a whopping 22 turnovers. They've forced 41 turnovers in their first two games. I asked Brownell after the opener if the full-court press was something we would likely see more of this season, and he said it would be. Their depth in the back court is a big reason for that.
The Tigers are 2-0 with wins over the SEC and Big Ten already! These are the types of games that cost them NCAA bids in several seasons, so they are big wins come selection time. They were picked 10th by the ACC media a couple weeks ago, and I said that I thought this team would potentially do much better than that. I really like what I see so far, and I think this is an NCAA Tournament team if they can stay healthy for once. Brownell has always been snake bit by injuries. The Tigers have almost a week off before hosting SC State next Wednesday in the home opener, and then they have another week off before hosting Maryland in the ACC/Big Ten Challenge. Our post-game interview with Brownell is below!
MORE CLEMSON BASKETBALL & FOOTBALL COVERAGE HERE