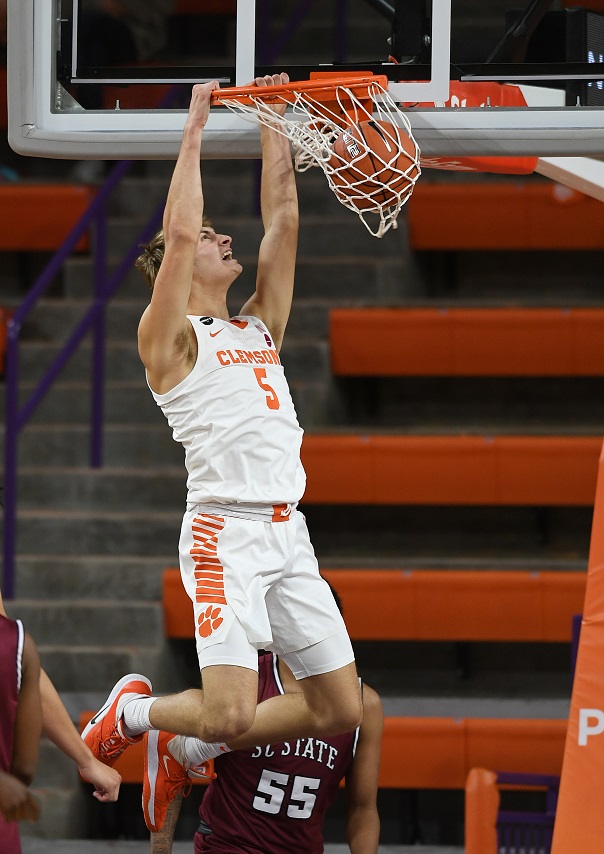 Photo by Trevor Groves CUTigers.com
CLEMSON, SC - The Tigers took care of business and absolutely dominated SC State on both ends, winning their 3rd straight by a score of 75-38. They doubled up the Bulldogs at halftime, 36-18 and were one point shy of doing the same in the second half. SC State's coach said before the game that their goal was to shoot 40 three-pointers, but they only got off 14 and didn't make one until the final minute on a bank shot! They also pressed the Tigers, hoping to speed up the tempo, but the Tigers were able to impose their will on the Bulldogs and dictate tempo. The Tigers did turn the ball over 15 times, which Brownell wasn't happy with, but they forced 24 and have now forced 65 in their first 3 games! The Tigers also shot a little better from 3, shooting 35 percent tonight. If they can average that this season, combined with the defense they play and their depth, they are going to win a lot of games.
Hunter Tyson led the way in the first half, going a perfect 3-3 from the field and 2-2 at the FT line with two 3's. for 11 points. Freshman O-Max Prosper added 11 points in the 2nd half for his best game. Baehre only played 5 minutes because he was a little sore, and freshman PJ Hall was out with a concussion that he suffered in practice on Sunday, so Prosper was called upon to play extended minutes in his 3rd game as a Tiger. They are now 3-0 on the season with a week off to prepare for a home game against Maryland in the ACC/Big Ten Challenge. Post-game interviews and highlights are below!
CLEMSON FOOTBALL COVERAGE HERE
CLEMSON FOOTBALL COVERAGE HERE