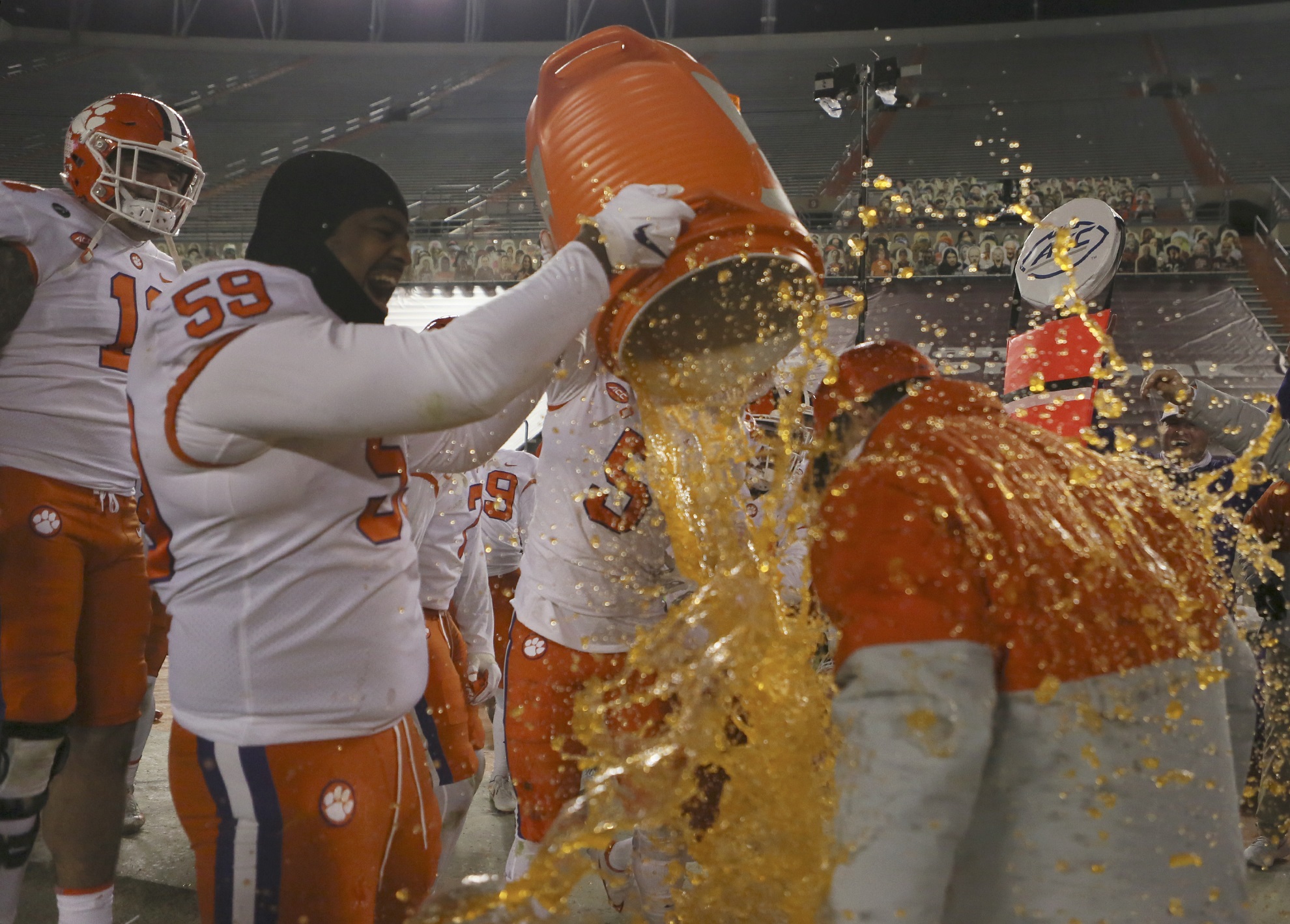 The Tigers' offense had a slow start in Blacksburg on Saturday night, but the defense kept the Hokies off the scoreboard, and the offense eventually blew the game open for a 45-10 win, clinching a 6th straight ACC Championship berth. Outside of a busted coverage in the first quarter by Charleston and a big play on a screen pass in the second half, the Tigers' defense was absolutely dominant. They allowed just 10 points and 339 total yards, and 42 of those yards came on the Hail Mary at the end of the first half. Speaking of which, what a scary moment for the Tigers! Derion Kendrick tried to do the right thing and knock the ball down, but he knocked it straight into the arms of Blackshear at the 2-yard line. Fortunately, Kendrick made the tackle and prevented the game-tying touchdown! He could have easily caught the ball for the interception, so he was right to knock it down instead of catch it, but he didn't knock it straight down the way they are coached. So that gave the Hokies 42 more yards than they should have had, but the Tigers kept them out of the end zone for the final 3 quarters. The Hokies had a top-10 rushing offense, averaging 6 yards per carry and 250 yards per game. Even without Skalski in the middle, the Tigers held them to half of those averages. Dabo said after the game that Skalski was just sore from his surgery, so they held him out as a precaution. That's great news for Clemson fans, as it's a different defense with him on the field. Jake Venables broke his arm after missing last week's game because he rolled his ankle in practice. We'll see whether he will be able to play with a cast in 2 weeks. Baylon Spector also left the game hurt, but it doesn't seem to be serious. The Tigers didn't record an interception for the first time since the second game of the season--which is ironic since Kendrick would have had one on the Hail Mary if he hadn't intentionally knocked the ball down--but they did come up with 3 fumbles, including a scoop and score by Kendrick. The Tigers came up a yard or two short of a scoop and score last week on Patterson's recovery at the end of the game. Redshirt freshman Lavonta Bentley had another impressive game, with a sack and a half after his sack last week. He now has 3.5 sacks this season, and he is the one who forced the fumble that Patterson almost took for a score last week. 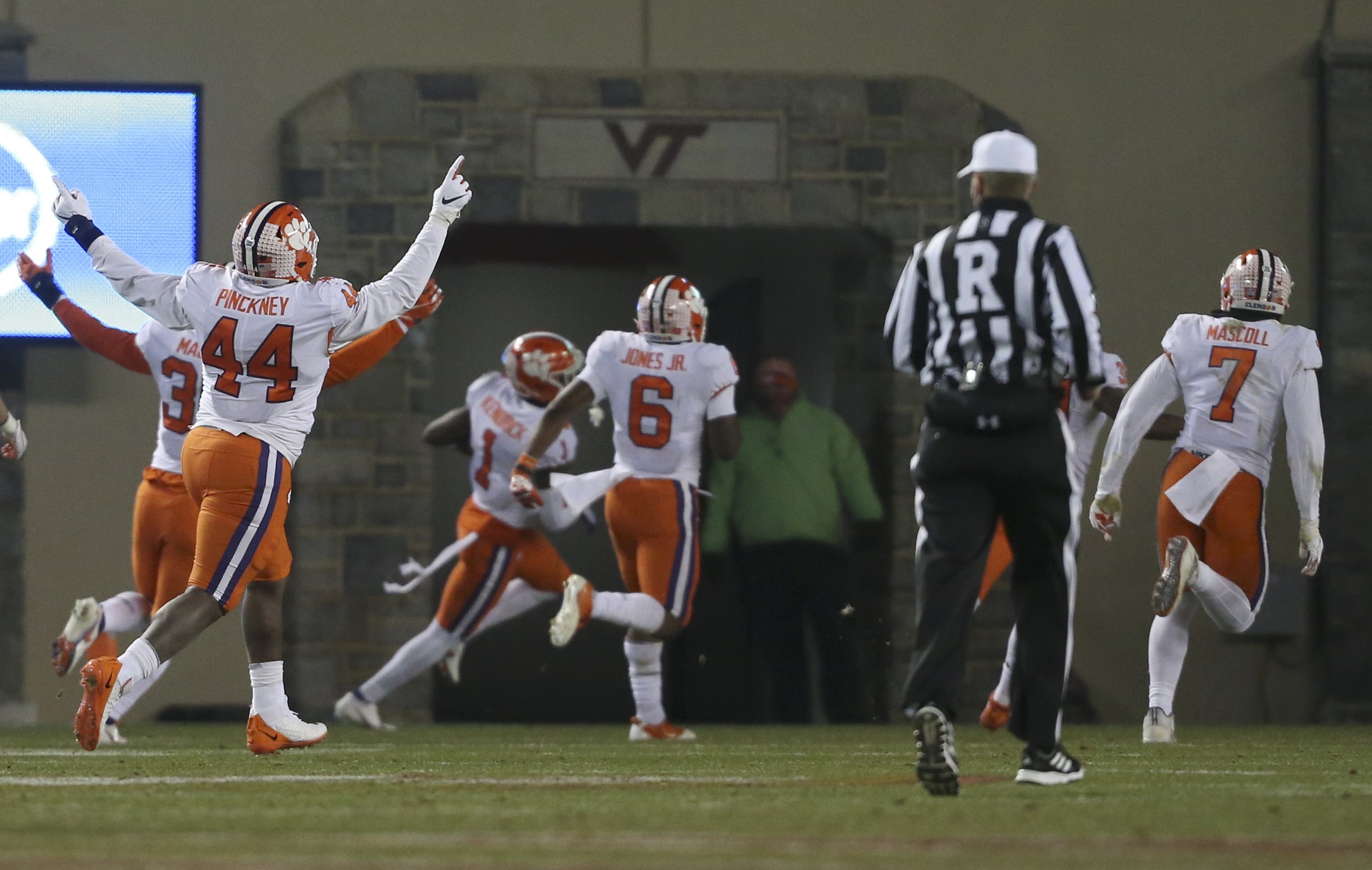 The Tigers' offense was rather stagnant for most of the first half, scoring just 10 points until the final minute of the half. Quite a difference from the 31-point first quarter they had last week! However, the Tigers worked their 4-minute offense to perfection to close the half with a 17-10 lead, thanks to a couple runs for 30 yards and a score by Lyn-J Dixon. After the Pitt game last week, I asked Dabo if that was Dixon's best game of the season, and he concurred. Amazingly, he scored his first touchdown of the season last week, and he followed that up with a big one before the half in Blacksburg to put the Tigers ahead for good. Trevor Lawrence was slightly off, throwing an interception in the end zone--just his 3rd of the season--and almost throwing another before that, when the corner came off coverage and Trevor didn't see him. Trevor finished 12-22 for 195 yards and 3 total touchdowns--scoring two with his legs. He now has 6 rushing TD's this season.
Travis didn't have the big game I was expecting him to have--in fact he didn't even score for the firs time since The Citadel game in week 2--but he made some nice runs and finished with 66 yards on 16 carries. Also, as I've said before, Etienne doesn't get credit for all the big plays made by the Tigers because of Etienne's presence on the field. The Tigers ran just 52 plays, about 30 less than usual, but scored 38 points on offense, so it wasn't their best performance, but it was far better than they needed. Ironically, the backs behind Etienne all had their best runs of the season. In addition to the aforementioned Dixon, Mellusi popped a 38-yard run in the second half, and Darien Rencher scored a touchdown on a career-long 50-yard run in the 4th quarter. Dabo tried to get Rench a TD in the final minute of last week's game on Senior Day, but he was stuffed twice in a row at the 2-yard line. This time, he looked like he was shot out of a cannon! What a week the former walk-on and team leader has had. He was named winner of the Disney Spirit Award on Tuesday, and finished the week with a career-long run for a touchdown! He will be coming back next season, by the way, and will continue to provide great leadership in his role as a reliable backup running back.
Cornell Powell came up 10 yards shy of becoming the first Clemson player with 4 straight 100-yard reception games, so he'll have to settle for being tied with Sammy Watkins and Nuk Hopkins at 3 straight games. Powell did score a 65-yard touchdown, though! It was his 3rd straight game with a TD and 5th out of the last 6.
Spiers had a couple bad punts, but better for that to happen now than in the post-season! He has been one of the nation's best all season, so I hope he got it out of his system.
It was the 6th straight win over the Hokies for Dabo and the Tigers. They will, of course, get a chance at revenge against Notre Dame in the ACC Championship in 2 weeks in Charlotte. Hopefully, the Tigers will be close to full strength this time! Trevor Lawrence now stands alone as the winningest quarterback in Clemson history at 33-1 as the starter. Deshaun Watson, Tajh Boyd and Rodney Williams all won 32 games.
Since the Tigers have off next week, we'll have our normal Sunday teleconference with Dabo on Monday evening, so be sure to check back for that as well as our Monday player interviews! Dabo's post-game press conference, notes and highlights are below. Click on the link for our coach and player post-game interviews!
MORE CLEMSON FOOTBALL COVERAGE HERE