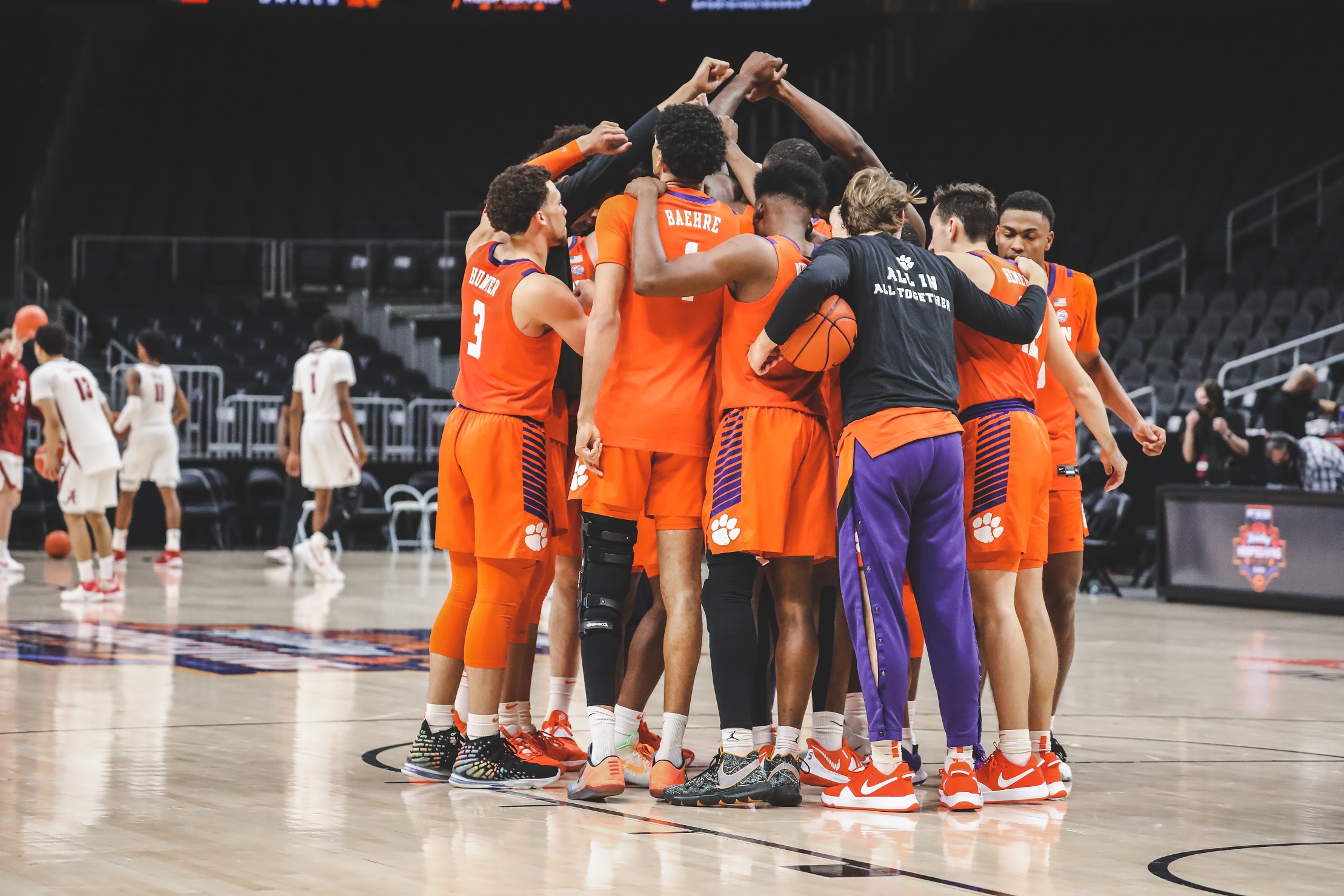 Photo by Trevor Groves CUTigers.com
We knew something would have to give on Saturday night in Atlanta, as the Tigers had the No.1 scoring defense in the nation at 50 points per game, and 3-1 Alabama came in averaging 80 points per game. It was the Tigers who were able to impose their style of play and dictate the tempo, as they stemmed the Tide's offense and led nearly the entire game.
Aamir Simms took himself out of the game early, as he is prone to do, with 2 early fouls and played just 4 minutes with 2 points in the first half. Hunter Tyson carried the Tigers early with 9 points in 6 minutes, but he was taken out of the game with a knee to the face and possible concussion. However, freshman O-Max Prosper stepped up and scored on back-to-back possessions, with a 3-pointer and an offensive rebound and put-back. He scored a career-high 11 points against SC State and is playing with a lot of confidence right now. The Tigers' defense remained strong with Simms and Tyson on the bench--particularly their 3-point defense--and Alabama was 0-7 from beyond the arc in the first half with 30 points. Free throws were the only thing keeping Bama in the game at halftime, going 12-13 while the Tigers were 5-9. Freshman PJ Hall made a big hustle play just before halftime, diving into the Clemson bench to save the ball from going out of bounds, which would have given Bama another chance to score before the half. The play rallied the entire team around the freshman and gave the Tigers some momentum going into the locker room with a 4-point lead.
The Tigers increased their 34-30 halftime lead to 12 points in the second half until Alabama converted 4 straight 3-pointers after missing its first 12. That got the Tide back in the game, and they even took a one-point lead with 6 minutes left. Brownell called a timeout and drew up a beautiful backdoor cut that Simms and Honor executed to perfection to grab the lead back for good. Dawes was the only Tiger to score in double digits with 10 points, but it was a great team win. The Tigers should have won their 5th straight game by double digits, but they missed the front-end of their last two one-and-one opportunities in the final minute of the game. In fact, the Tigers were just 5-11 from the line and missed several front ends of one-and-ones. They also had a season-high 21 turnovers, so it wasn't their best performance, but they still forced 15 turnovers and managed to win by 8 points over a good SEC team!
The Tigers are now 5-0 and will undoubtedly be ranked next week for the first time in just over 2 years! They have 2 wins over the SEC and 2 wins over the Big Ten already, with an average margin of victory of 16.5 points in their 5 wins. It will be a quick turnaround, though, as the Tigers begin ACC play at VA Tech on Tuesday, so they won't have much time to enjoy their new ranking.
Our post-game interview with Brownell is below!
MORE CLEMSON BASKETBALL AND FOOTBALL COVERAGE HERE