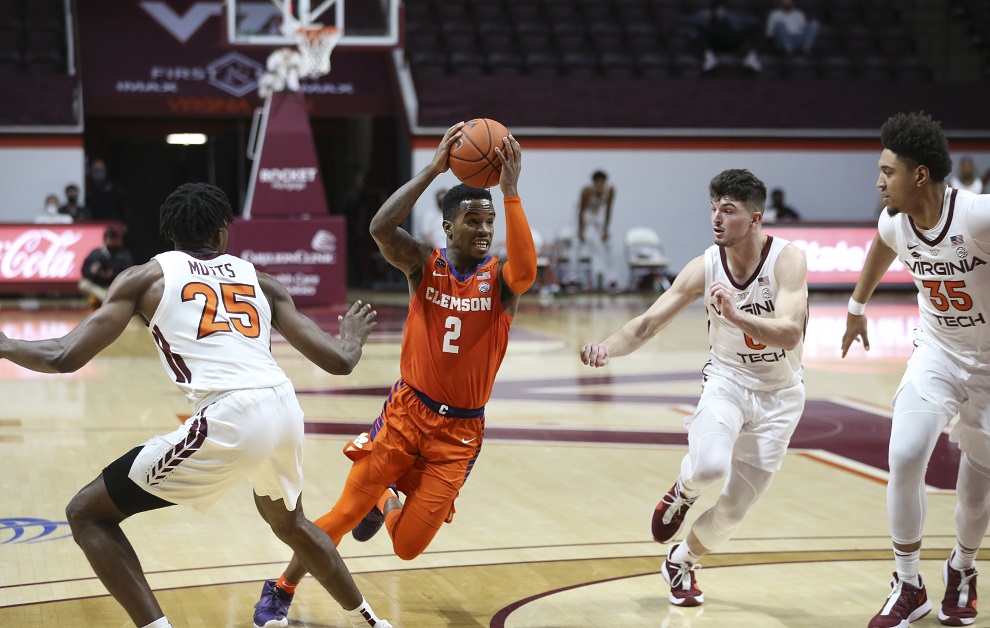 The Tigers trailed by as many as 16 in the second half but rallied to cut the lead to 2 with 30 seconds left. They came up just short of a turnover on the full-court press, and the Hokies were able to put the game away at the free throw line. Brownell said after the game that he felt like the team lacked energy in the first half, and you could see that. That was a concern with the quick turnaround they had, playing 3 games in 7 days and going from Atlanta Saturday night to Blacksburg on Tuesday night. They were also missing Hunter Tyson, and they sure could have used his offense and 3-point shooting. He scored 9 points in 6 minutes on Saturday before leaving the first half with a knee to the face. Brownell told me that he doesn't have a concussion, but he had a bad facial laceration and will be out for a while. Fortunately, they have a week off and then Christmas.
The biggest difference in the game was the free throw line. The Hokies shot a ridiculous 31 free throws, making 25 of them. That's 11 more than the Tigers even attempted! Many of the foul calls by the refs were highly questionable as well. Simms once again picked up 2 fouls in the first half and had just 2 points at the break. He picked up his 3rd as soon as the 2nd half started, and Brownell gambled by leaving him in. The gamble worked, and Simms was able to play most of the half without a foul until the final couple minutes, but I think the early foul trouble still took him out of his game. He had a great last 10 minutes or so, finishing with 15 points.
This wasn't a terrible loss, but it's a game the Tigers would have won under normal circumstances. The Hokies upset No.3 Villanova earlier in the season, so it won't look terrible on the resume, In my opinion, the Tigers shouldn't drop out of the rankings after a close road loss like this after 5 blowout wins and missing a key player. However, they probably will anyway. They have a much-needed week off thanks to Saturday's game at SCAR being canceled. That will give them a chance to regroup for a home game with Morehead State next Tuesday.
Our post-game interview with Brownell and highlights are below!
MORE CLEMSON BAKETBALL & FOOTBALL COVERAGE HERE