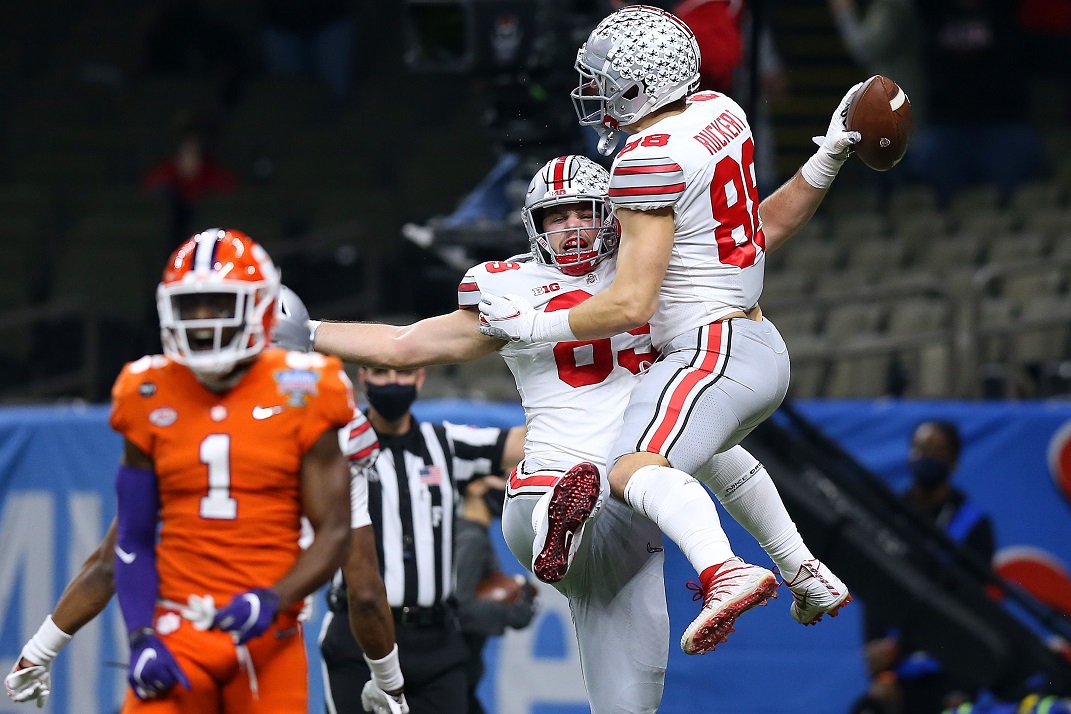 NEW ORLEANS, LA - Well, I'm still in shock. I haven't seen the Tigers torched like that since the FSU game in 2013. The Tigers got off to a great start, marching down the field 82 yards in 8 plays for a touchdown, and it seemed like they would roll as we all expected, but it was just Ohio State's night. Give them credit for responding to the opening score and answering again when the Tigers went up 14-7. The Buckeyes would score the next 28 unanswered points and put the game away for good. It was the Tigers' biggest deficit since that 2013 FSU game and their biggest halftime deficit since the 2011 Orange Bowl loss to West Virginia.
I'm so busy during the game that it's hard to analyze what went wrong, so I'll have to watch the replay in order to dissect it all, but I would say it was probably a combination of the coaches being outcoached and the players being outplayed. Dabo told me after the game that he thought Streeter did a good job calling the plays. Whether Tony Elliott would have made a big enough difference, we'll never know. But the Tigers' offense wasn't nearly as bad as the defense, which allowed a whopping 639 total yards, 254 on the ground. All I can say is that Ohio State team in no way resembled anything hey had shown in their 6 games this season. It's as if they saved it all for this moment and let it explode. Fields looked terrible in his only two games against ranked opponents--Indiana and Northwestern--but he was sensational in the Superdome, dropping dimes all over the field, even after taking a vicious blow to the ribs by Skalski. Speaking of which, that was a huge loss in the first half for the Tigers. When Skalski left the game, I knew the Tigers were in serious jeopardy because we've seen how different the defense has looked without him. The same thing happened when he was ejected for targeting against LSU last year on the very same field. I'm not sure if the Tigers could have won with Skalski in the game, but Venables and the defense sure had no answers for Fields, Olave, Wilson, Sermon and company. Sermon is like a totally different person all of the sudden. He did absolutely nothing in their first 5 games and then suddenly exploded for 330 yards in the Big Ten Championship and was unstoppable again tonight! And the tight end, Ruckert? He had a total of 9 catches for 60 yards coming into the game. By halftime, he had 3 catches for 55 yards and 2 touchdowns! He hadn't even played since November 21! Olave, who hadn't played in almost a month due to COVID, was also at the top of his game and burnt the Tigers' secondary several times. No one could have foreseen this performance from the Ohio State offense, and I think the Tigers were totally stunned by it. Again, seeing a Brent Venables defense run up and down the field like that is about as much a rarity as anything in college football.
Assuming it was the last game for Trev and Trav, what a sad swan song for the dynamic duo that set so many Clemson and national records. Trevor actually had a fantastic game--at least for any human quarterback. He was 33-48 for 400 yards--his third-highest career total, I believe--with 3 total touchdowns. He almost had a 4th TD, but the ball was ripped out of Amari's hands in the end zone for Trevor's only interception. Even Heisman quarterback Kyle Trask would have loved to have those stats in his last game. Trevor never quit fighting until the very end, and it was heartbreaking to see him with tears in his eyes during our post-game interview. Travis would not be pleased with his stats in his final game, his 3rd in his backyard of New Orleans. He rushed for just 32 yards on 10 carries, but he did score a touchdown and had 4 catches for 64 yards. The Tigers were forced to kind of abandon the run game early because Ohio State was scoring so quickly that the Tigers had to play catch-up. Travis tied Travis Prentice for fourth-most touchdowns scored by any FBS player since 1956! Trev, Trav, Amari, Cornell and the other seniors have left an amazing legacy and will be remembered as perhaps the greatest class in Clemson history.
Our post-game interviews with Dabo and Trevor are below. I'll have much more to come!
MORE CLEMSON FOOTBALL COVERAGE HERE