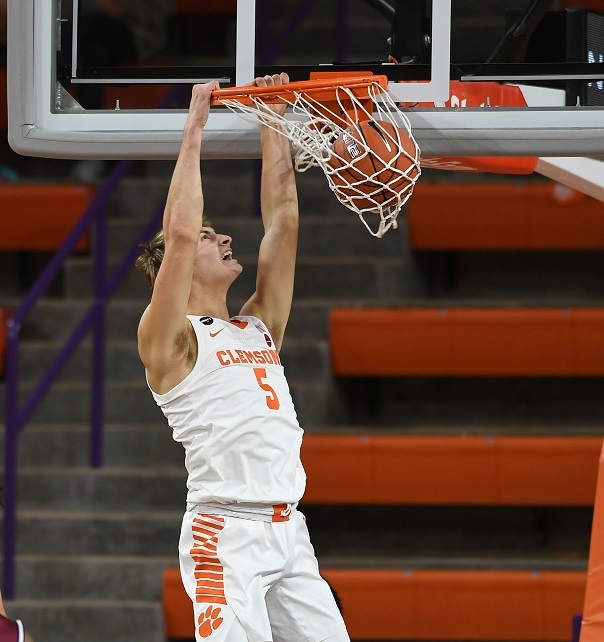 We just wrapped up with Brownell, and he told me that Hunter Tyson could make his return tomorrow night against No.18 UVA. Tyson has been out over a month with a facial injury suffered against Alabama. He is 4th on the team in scoring average and had 9 points in just 6 minutes before leaving the Alabama game.
Brownell said the disruption to the team's momentum was difficult. They were riding a 4-game win streak and then had to suddenly stop practicing and isolate. It sounds like possibly none of the players even had COVID, but that it was Assistant Coach Bender who tested positive. Brownell said that he and Bender had to watch practice on video the other day. Since Brownell was back in the building today, and Bender will not be on the bench tomorrow night, that leads me to believe that it was Bender who tested positive.
At any rate, the Tigers will have their hands full with No.18 UVA, which is coming in hot. The Tigers have beaten all of the big boys in the ACC--Duke, UNC, Louisville, Syracuse and FSU--multiple times each in the last couple years, but they haven't been able to knock off UVA in quite some time. In fact, after winning his first two meetings with UVA, Brownell has lost 10 straight to the Hoos! This would be the year to beat them, but it's the worst possible timing with the Tigers coming off the 10-day hiatus. Brownell said that the players looked fatigued at practice the other day, and they will have to be sharp against that Tony Bennett defense. If there's any rust, the turnovers will mount in a hurry. And look out for Jay Huff! He's a 7-footer who likes to drain 3-pointers. He was 4-8 from 3 against Notre Dame the other night and is 44 percent this season. Their 6'9 guard, Murphy, can also stroke the 3's at 48 percent. Kihei Clark is still running the point for the Hoos. It seems like he's been there for 10 years. He will make it tough for the Tigers to press.
The full interview with Brad Brownell is below!
MORE CLEMSON BASKETBALL AND FOOTBALL COVERAGE HERE