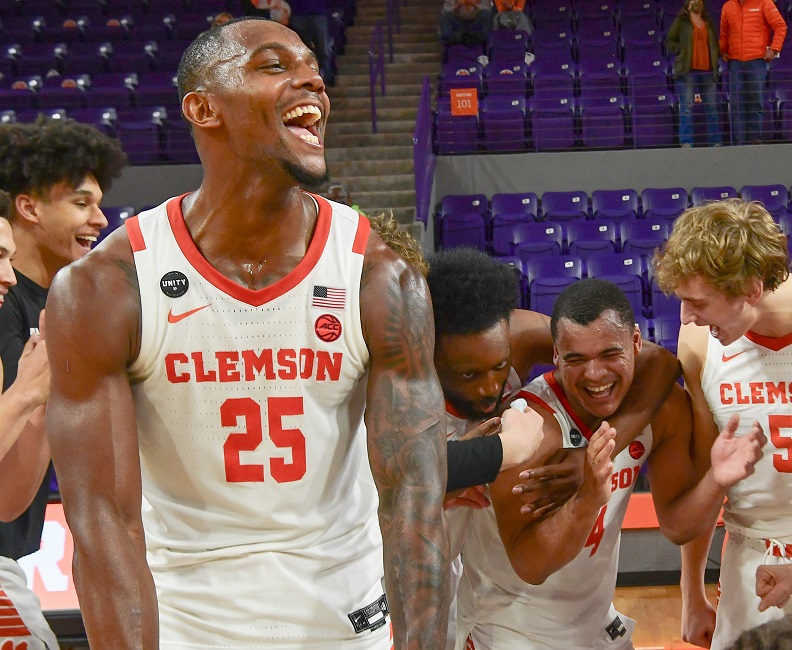 
NO.7 SEED CLEMSON TO PLAY NO.10 SEED RUTGERS IN NCAA TOURNAMENT

Photo by Trevor Groves CUTigers.com
CLEMSON, SC - There was little tension among the Clemson Basketball program and fan base on this NCAA Selection Sunday, as the Tigers were expected to be comfortably in the field. However, Joe Lunardi projected Clemson as a 10 seed, but the NCAA Selection Committee tabbed the Tigers as a 7 seed! They will play No.10 seed Rutgers on Friday at 9:20 ET in Indiana, televised on TBS. I guess the committee recognized and appreciated the Tigers' quality wins, which included an 8-point win over SEC Champion Alabama, a 10-point win over 4 seed FSU and 11-point win over 4 seed Purdue.
It's about as good a spot as they could hope for! If they beat Rutgers, they will likely play No.2 seed Houston, which would be my preference of all the 2 seeds, on Sunday. The Tigers are 2-0 this season against the Big Ten, beating 4 seed Purdue by 11, as mentioned, and 10 seed Maryland by 16! Early in the season, when the Tigers were 6-0 against non-conference teams including those big Power Five wins, I asked Brad Brownell about how valuable those wins would be come NCAA selection time. He made light of the fact that it was so early in the season and selection time so far away, but my question was prophetic because it was exactly those early non-conference wins that made Selection Sunday so stress-free for Brownell and the Tigers!
In his 11th season, Brownell joins Cliff Ellis, Rick Barnes and Oliver Purnell, each of whom took the Tigers to 3 NCAA Tournaments. Of the group, Brownell has the best NCAA record at 3-2, making the Sweet 16 in his last trip in 2018. Bill Foster went 3-1 in his only NCAA Tournament and Clemson's only Elite 8 appearance in 1980. All of the NCAA games will be played in the state of Indiana this year due to COVID, and that is coincidentally Brownell's home state, where he grew up and played college ball.
The ACC tied the Big 12 for second-most bids (7), behind only the Big Ten's 9. The ACC would have had 8, but Louisville was left in the cold thanks to shocking conference championship runs by Georgetown and Oregon State, neither of which was even close to the conversation for an at large bid. They secured automatic bids by winning their weak conference tournaments and knocked Louisville out. The Pac-12 would have had just 4 bids if Oregon State hadn't won their tournament.
Interviews with Brownell, Simms and Trapp are below!
PRINTABLE NCAA BRACKET
MORE CLEMSON FOOTBALL, BASKETBALL AND BASEBALL COVERAGE HERE