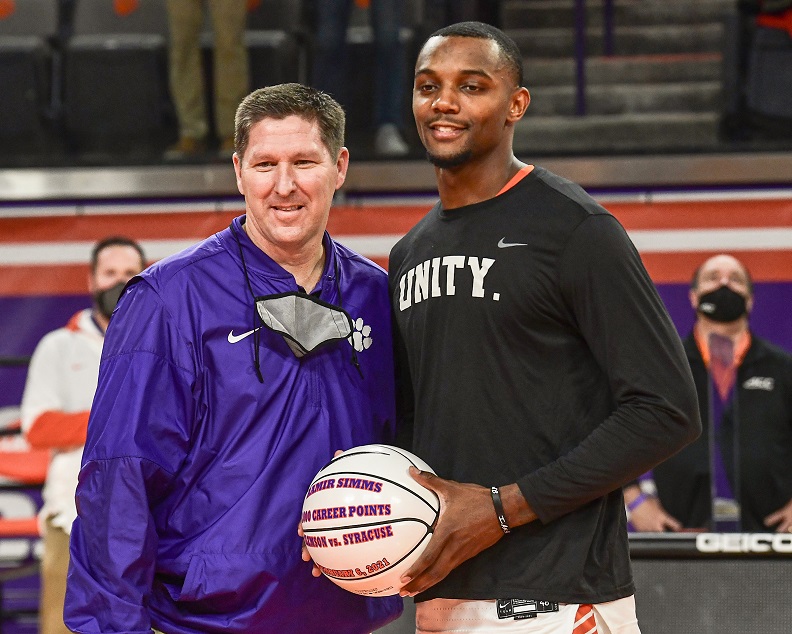 The ACC and Big Ten will clash on the hardwood once again, this time in the first round of the NCAA Tournament, as the Tigers take on the Scarlet Knights in Indianapolis at 9:20 ET on TBS. The Tigers are making their second NCAA appearance in the last 3 tournaments, making the Sweet 16 in 2018. Rutgers, on the other hand, is making its first appearance in 30 years after being deprived of that opportunity last season by the pandemic. The Tigers are 2-0 versus the Big Ten this season, beating 4 seed Purdue by 11 points and 10 seed Maryland by 16 in the ACC/Big Ten Challenge. Rutgers was matched up with Syracuse for the challenge and won 79-69. The Scarlet Knights started the season red-hot, winning their first 6 games, culminating in a 91-88 home win over Illinois. They ascended to No.11 in the AP Poll after the hot start but lost 5 straight and 6 of 7 after that, dropping out of the rankings. They finished the season 6th in the Big Ten and 15-11 overall after beating Indiana and losing to eventual champion Illinois in the Big Ten Tournament.
The Tigers had a similar season, reaching as high as No.12 in the rankings after a 9-1 start but dropping out of the rankings after a losing streak following the first of two COVID pauses. Of the two teams' common opponents this season, Rutgers split with Maryland and was 2-0 against Purdue and Syracuse.
The Tigers and Knights are really mirror images of each other in a lot of ways. Neither team is great offensively or at 3-point shooting, but both are excellent defensive teams and very athletic. Rutgers essentially plays with 4 big guards and a center, Myles Johnson, who is 6'11 and 255 pounds. He will be a tough matchup for Simms and company in the paint. Their other 4 starters are all perimeter-type players, athletic and good ball-handlers like guards, but they have size as well. Most of you will remember NBA great Ron Harper, who was a part of the Bulls' dynasty in the 90's. His son, Ron Harper, Jr., is 6'6 and 245 pounds but plays on the perimeter like a guard and is a handful to stop from driving to the basket when he gets a head of steam. He leads the team with 15.4 points per game. Point guard Jacob Young is your more prototypical guard at 6'2, 185 pounds, and he averages 14.4 points per game. Then they throw a couple 6'4 guards at you in Geo Baker and Montez Mathis, who average 10.1 and 8.5 points per game. Oh, and then there's 6'6 Paul Mulcahy, who is their best 3-point shooter at 36.5%. With all that height and athleticism, they can come at you in a lot of different ways, so the Tigers will need to bring their best defensive effort on Friday night.
In my opinion, this is about as even a matchup as there is in the first round of the entire tournament, and it will all come down to shooting and turnovers for the Tigers. If they shoot the ball reasonably well and don't turn the ball over more than a dozen times, the Tigers will win. That's assuming also, of course, that Aamir Simms does not get in foul trouble as he's been prone to do. He's done a much better job at avoiding that in the last month of the season, however. The Tigers shot the ball reasonably well against Miami last week, going 8-11 from beyond the arc in the first half and 12-23 for the game. However, they turned the ball over 15 times. Take away just a couple of those, and they probably win the game. Even still, they had the ball with a chance to win in the final seconds. Rutgers forces 13 turnovers per game, so the Tigers will have to be extra protective of the ball. If the Tigers limit the turnovers and get a big game from Nick Honor, who has been cold lately, they will probably win because Hunter Tyson and Al-Amir Dawes have been hot. I would like to see Dawes be more aggressive on the offensive end. He has probably been the Tigers' most consistent shooter over the last month, but in their losses to Syracuse and Miami, he only shot the ball a total of 10 times. He was a combined 6-10 from the field in those games. In the Tigers' recent win over Miami, he scored 17. It might be tough for Dawes to get open looks against these long guards of Rutgers, so he might have to drive to the basket more or look to score in transition if he's going to score in the double digits. Incidentally, Dawes is a New Jersey native, so I'm sure he's excited about going up against his home state's team!
This game will likely be a nail-biter, although I wouldn't be shocked if the Tigers play one of their better games and win by double digits. We spoke with Brad Brownell and Aamir Simms on Wednesday to discuss Rutgers and life inside the bubble. Brownell, of course, is a native of Indiana, so he must feel right at home in Indianapolis. Seniors Simms and Trapp were freshmen on that 2018 Sweet 16 team, so they know what it takes to win at this level. Our interviews from Wednesday are below!
MORE CLEMSON BASKETBALL, BASEBALL AND FOOTBALL COVERAGE HERE