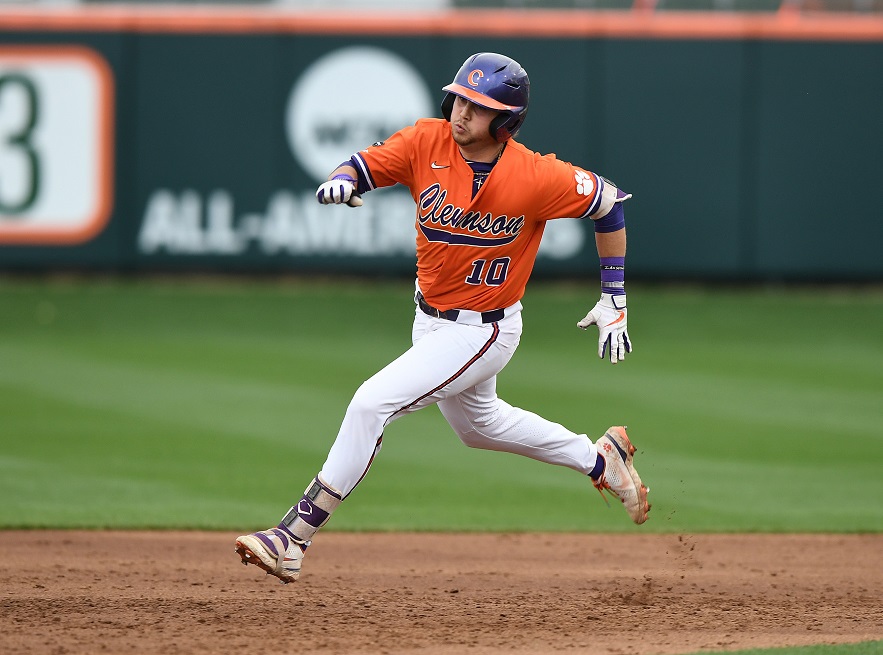 Photo by Trevor Groves CUTigers.com
CLEMSON, SC - The Tigers got just the start to the series that they needed on Friday night, beating No.13 VA Tech 8-2 for their first ACC win in two weeks. Redshirt freshman Mack Anglin made his first start of the season on the mound and gave up a run in the 1st after loading the bases with no outs. The Tigers immediately answered, also loading the bases with no outs, and scored 5 runs in the bottom half thanks in large part to a 2-out, base-clearing triple by Bryar Hawkins with the bases loaded. It was critical that the Tigers scored some runs early to give them some momentum and confidence while taking pressure off of the offense, which was stagnant in their previous 5 ACC games. The Tigers would lead for good after the 1st, adding homers by Parker, Teodosio and Henderson, who extended his hit streak to 6 games. It was the 3rd HR of the season for both Parker and Teo, the first for Henderson.
Mat Clark did a great job of middle relief and picked up the win, giving up just 2 hits, one run and no walks in 4 innings of work. Anglin gave up 6 hits and a run, loading the bases twice, but he was strong when he needed to be and struck out 6 in 3 innings with no walks. Monte wasn't taking any chances with the 8-2 lead, bringing closer Geoffrey Gilbert in to start the 8th inning and finish the game. Monte said after the game that Gilbert should be available for an inning or so on Saturday if needed.
Monte shook up the pitching rotation this weekend and was going to start regular Friday starter Davis Sharpe on Saturday, but Monte told us after the game that Sharpe is injured and will be a scratch for Saturday. Freshman Ty Olenchuk will get the start on Saturday instead, and Keyshawn Askew will make his first start of the season on Sunday. Monte said that he does not yet know the extent of Sharpe's injury or when to expect him back. I also asked him about Sam Hall's status, and Monte said that he is expected to practice again in the next couple weeks.
First pitch on Saturday is at 3:00, and I'll have live play-by-play at the link below, as always. Post-game interviews are below!
MORE CLEMSON BASEBALL, BASKETBALL AND FOOTBALL COVERAGE HERE