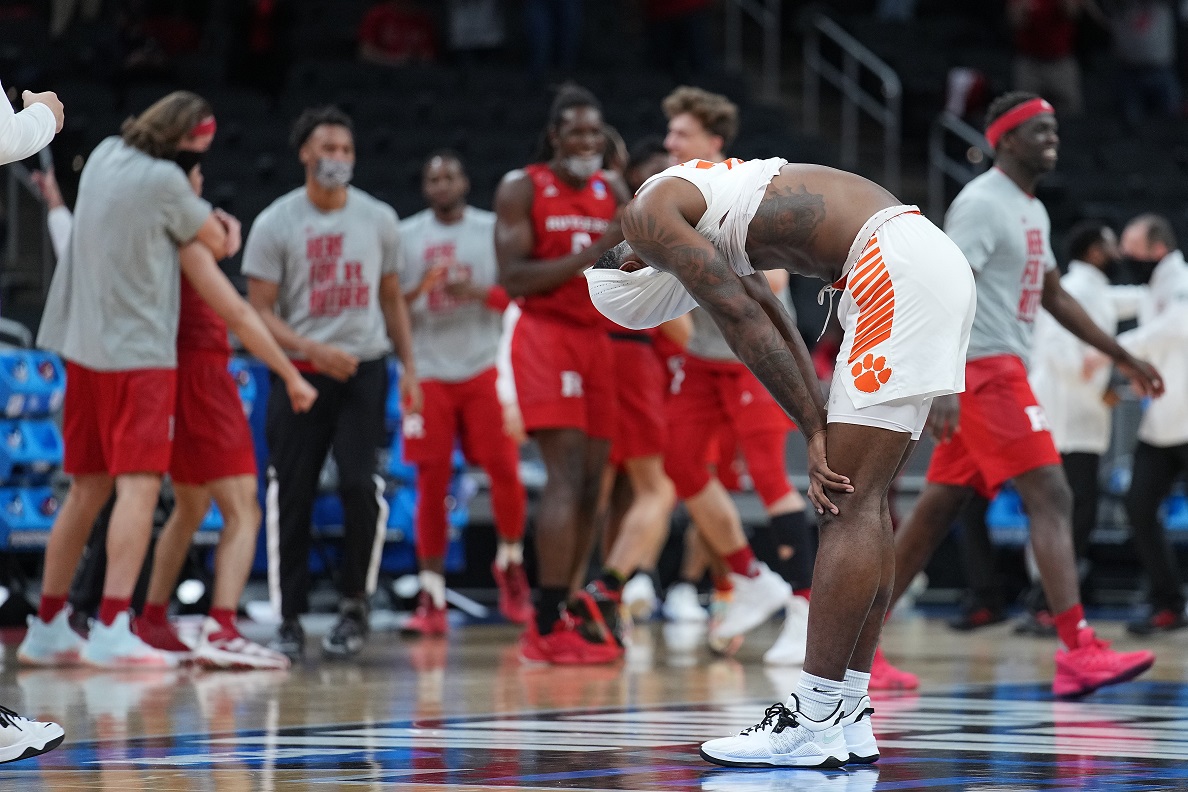 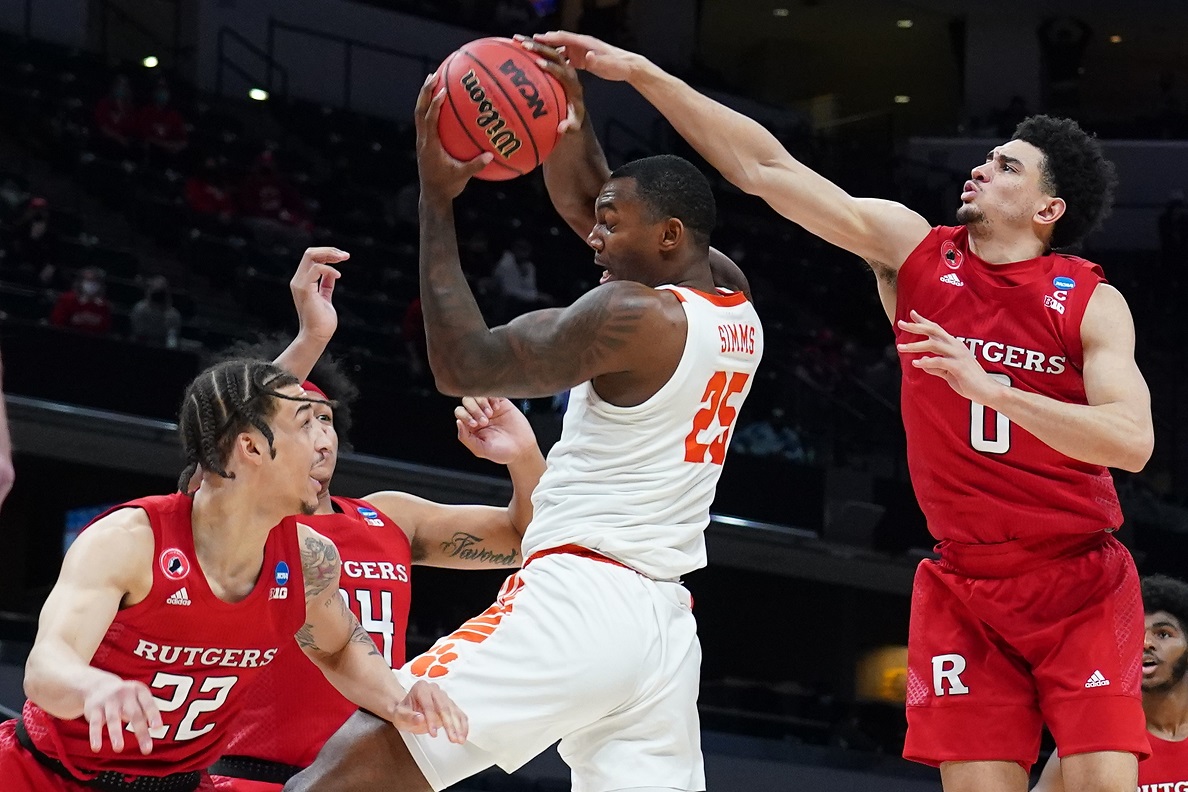 INDIANAPOLIS, IN - As I expected, it was a low-scoring nail-biter on Friday night, and the Tigers led much of the game but simply did not make the crucial plays down the stretch, and Rutgers did. There was a questionable traveling call on Simms with 40 seconds left and the Tigers down 2 points, and Brownell said after the game that he did not think it was a travel. However, the Tigers still had their opportunities but weren't able to capitalize. Give credit to Rutgers for making some big shots, but the ball also bounced their way a few times, and in a game like this, that is all the difference between advancing and elimination.
The Tigers led 26-23 at the half, led by Simms and Jersey native Dawes with 8 points each. However, Dawes disappeared offensively in the second half and Simms for much of the half. Dawes was 3-4 from the field and 2-3 from beyond the arc in the first half but was 0-4 with no points in the second and didn't shoot a single 3-pointer. Simms got going late in the second half, finishing with 15 points, but it was senior Clyde Trapp who really kept the Tigers alive in the second half. He went coast-to-coast for a buzzer-beating layup to end the first half with his first score, and he went on to score the next 9 points for the Tigers to open the second half. He would finish with 14 points, one of the highest-scoring games of his career. 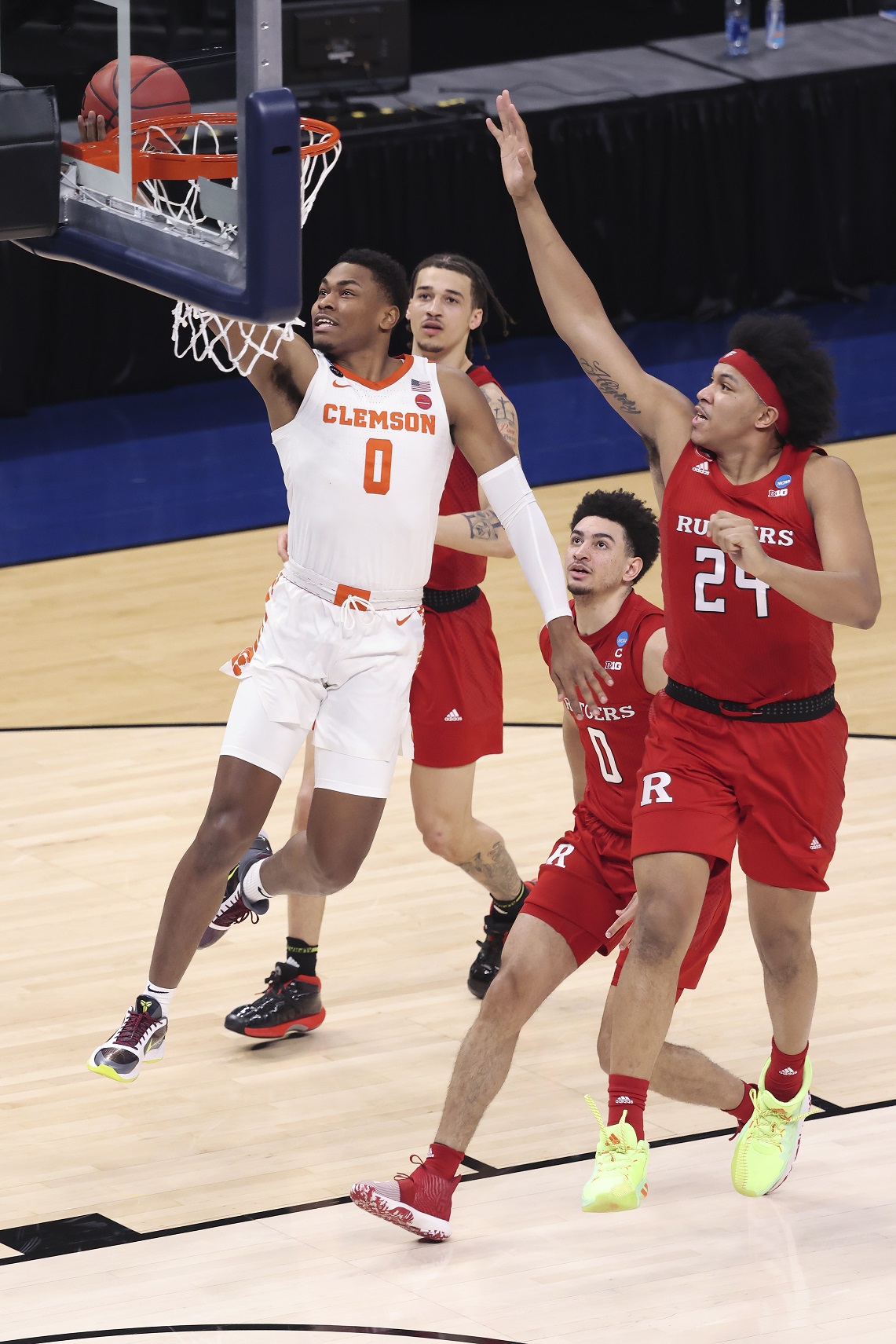 Both seniors Trapp and Simms gave their all and left their hearts on the floor. It's a shame to see their careers end this way, but they have absolutely nothing to hang their heads about. They are two of the winningest players in the history of Clemson Basketball, making two NCAA Tournaments, a Sweet 16 and an NIT in addition to winning an international Gold Medal at the World Games. They won and lost with class and dignity, representing Clemson in the best possible way, and Simms won the Skip Prosser Award for academics while making 2nd Team All-ACC.
The seniors and the rest of the team should be proud of the season they had and consider it a great success, despite the way if finished. They were faced with challenges that no other team in history has had to overcome and finished 5th in the ACC, a half game out of 4th place, despite being picked 10th preseason. They finished ahead of Duke, UNC, Louisville and Syracuse despite two COVID pauses.
As for Brad Brownell, let me address the knee-jerk Clemson fans who have always been against Brownell and are now saying that he should be fired for going one-and-done in the ACC Tournament and NCAA Tournament. A few FACTS: Clemson has only made the NCAA Tournament 13 times in its 110-year basketball history. 3 of those trips were under Brownell, tied for the most of any Clemson coach ever. 2 of them came in the last 3 tournaments, including a Sweet 16 run, one of just four in Clemson's 110-year history. Brownell has the best conference win percentage of any coach in Clemson history. He is 3-3 in the NCAA Tournament, tied for the best in Clemson history (minimum 2 tournaments). In addition to all that, he has done things the right way, does not cheat, runs a clean program and graduates his players. Clemson had more players (6) make the ACC All-Academic Team this year than any other school. More than Duke, UVA, UNC and Notre Dame. Yes, the Tigers went one-and-done this time. So did 2 seed Ohio State, losing to 15 seed Oral Roberts in a game that was not nearly as close as the Tigers' loss. So did 4 seed Purdue, losing to 11 seed North Texas with a home crowd in their home state. So did overall No.1 seed UVA, making history by losing in the first round to a 16 seed a few years ago. They won the national title the following year. Those of you who want Brownell fired are simply biased and delusional. You have been spoiled by the elite status of the football program and unrealistically expect identical results in basketball, even though no school has ever done that in history for both football and basketball, let alone a small school like Clemson. You people need a serious reality check and a heavy dose of perspective. I am a Clemson alumnus with two Clemson degrees, and I remember the Larry Shyatt years all too well, when the Tigers were perennially dead last in the ACC and didn't even make the NIT, let alone sniff the NCAA Tournament. And you are screaming and complaining about getting knocked out of the NCAA two years after making the Sweet 16?? I'm sorry, but those of you need to get a grip on reality and understand how difficult it is to make the NCAA Tournament at all, especially at a football school like Clemson. Hell, the two greatest basketball programs of all time, Duke and Kentucky, didn't even make the NCAA this season, and the latter had a losing record! Personally, as a Clemson alumnus, I am perfectly content with the best football program in America and a very good basketball program that has a winning record every year and regularly makes the NCAA Tournament. And the bottom line is this: the Clemson administration understands what I do, and that is why Brad Brownell is going nowhere. You might as well get used to that idea and get over it!
Sorry for the rant, but there are a lot of Clemson fans out there who are completely deluded, and I get tired of hearing them complain and demand that arguably the best basketball coach they've ever had be fired. I'll have post-game interviews shortly!
MORE CLEMSON BASEBALL, BASKETBALL AND FOOTBALL COVERAGE HERE