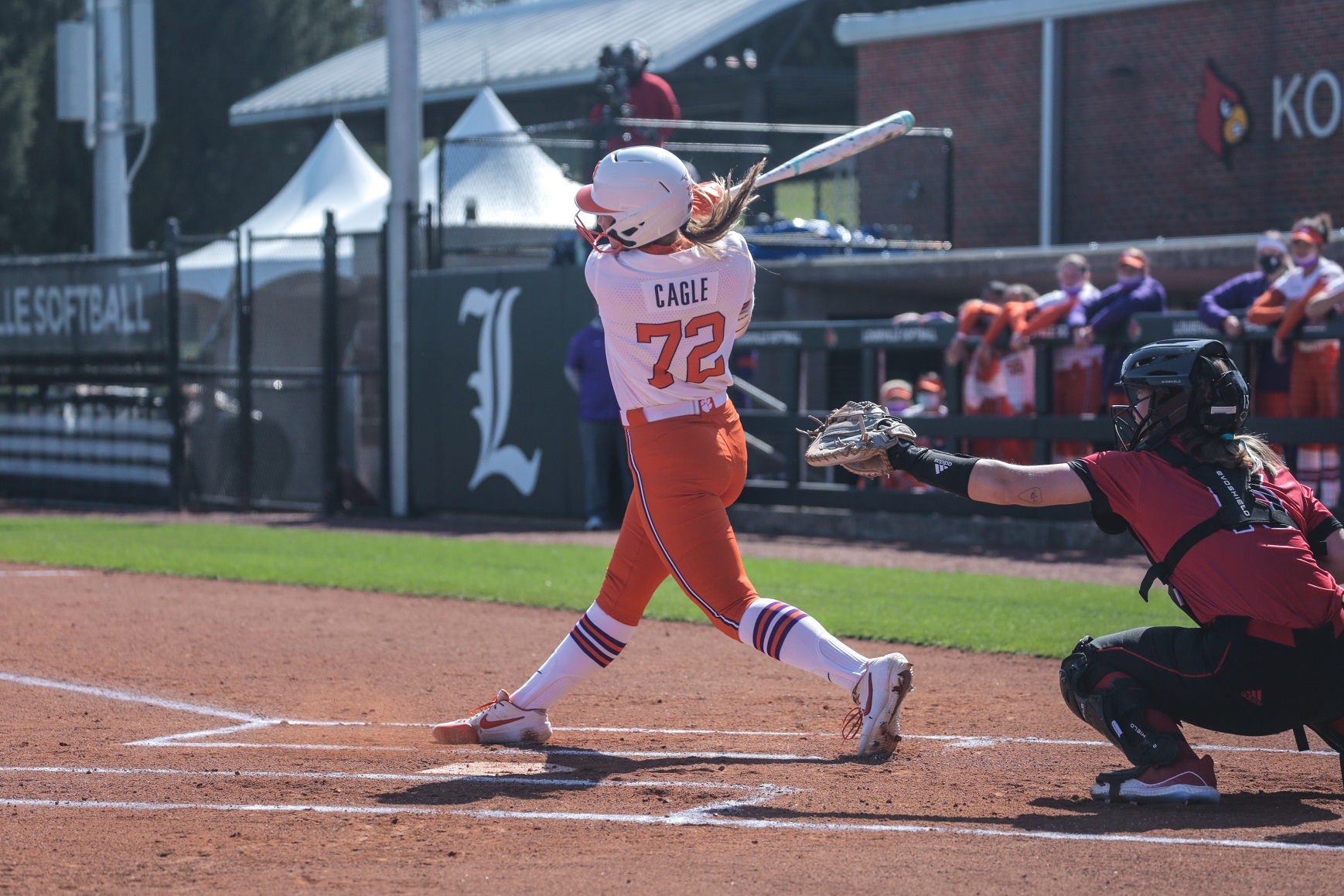 LOUISVILLE, Ky. — The No. 23/25 Clemson Softball Team (20-2, 12-2 ACC) swept its fifth consecutive series and 17th straight game with a 4-2 victory over Louisville (9-11, 3-6 ACC) at Ulmer Stadium on Sunday afternoon. All four Clemson runs were thanks to freshman righty ace Valerie Cagle, who went 3-for-3 at the plate, including two home runs, and accounted for all four of Clemson’s RBIs. Cagle (12-1), the ACC’s leader in wins, also earned a complete-game victory in the circle after recording her second 14-strikeout performance of the series, and did not allow a single walk in Sunday’s series finale.
Additionally, Cagle’s 14 strikeouts are a career best in all games that have been completed in seven innings or less. Cagle recorded 14 strikeouts in 11.0 innings in Friday night’s 4-0 shutout victory over the Cardinals.
With its 17th straight win, the Tigers tied both the Clemson Volleyball (2007) and Women’s Tennis (1977-78) programs for the longest winning streak in school history by a women’s program.
The Tigers jumped on Louisville early as Clemson center fielder McKenzie Clark hit a leadoff triple. Clark’s triple was her fifth of the season and is good for the most by any ACC player this season. Two batters later, Cagle registered a two-RBI double to score Clark and pinch runner Carlee Shannon to give the Tigers a 2-0 lead entering the bottom of the first.
The Cardinals responded in the bottom half of the first, scoring a run on a Clemson throwing error to cut the Tigers’ lead to 2-1.
Cagle extended the Tigers lead to 4-1 after a pair of solo home runs in the third and the sixth innings. Sunday’s contest marked the fourth multi-home run effort of her career and second this season.
After Cagle’s homer in the sixth, Louisville registered its fourth and final run of the series after a high flyball to left field, but the Clemson left fielder lost the ball in the bright sunlight at Ulmer Stadium, allowing the Louisville runner to score from first.
Cagle recorded all three outs herself in the bottom of the seventh after striking out two and retiring the final batter of the series on a groundout hit back to the circle.
Up next, Clemson returns home to McWhorter Stadium to host No. 14 Duke (23-1, 11-1 ACC) in a four-game series, which begins Friday at 5 p.m.
MORE CLEMSON SOFTBALL, BASEBALL AND FOOTBALL COVERAGE HERE