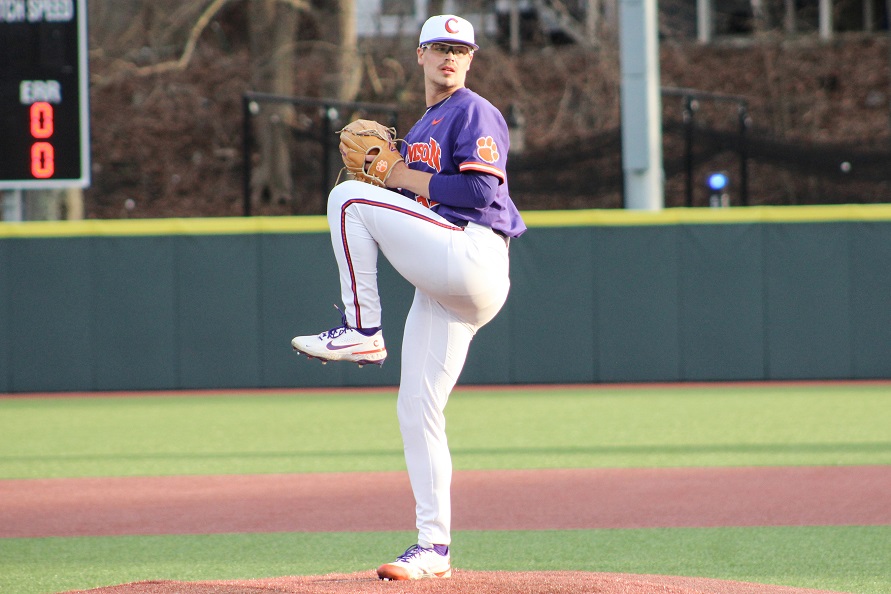 The Tigers won a crazy game on Friday to open the series at Boston College, with tons of offense in the early and late innings. After first-time starter Jackson Lindley gave BC a 3-spot in the 1st inning, the Tigers answered to take a 6-3 lead in the 2nd, but Lindley gave the lead right back in the bottom half of the 2nd, allowing 5 more runs. I couldn't for the life of me figure out why Monte waited so long to pull Lindley out, rather than going to the pen with the bases loaded while they still had a lead, but fortunately for the Tigers, they wouldn't have a problem scoring more runs. After Hughes gave up 2 more runs in the 5th to make it 10-6, the Tigers proceeded to score 10 unanswered runs--including a 7-run 7th--to take a 16-10 lead, and they would hang on to win 16-12. It was the most runs the Tigers have scored all season, and freshman Caden Grice led the way with a whopping 7 RBI's, going 4-6 at the plate with a double and a triple. Ironically, the Tigers didn't hit a single home run in the game but had 16 hits. Grice, who leads the team in HR's, was just a homer short of batting for the cycle for the first time in Clemson history. Parker went 3-6, Hackenberg was 2-4, and they each drove in 3 runs. Evan Estridge wound up with his first win, and Geoffrey Gilbert got the save.
Game 2 was much more of a pitchers' duel. The Tigers got a great outing from Keyshawn Askew, going 6.2 innings and allowing 2 runs in his second start of the season. After leading 2-0 in the 5th and 3-1 in the 7th, it looked like the game might get away from the Tigers when BC tied the game 3-3 in the 8th thanks to a full-count walk by Gilbert, a passed ball and a sac fly. That sent the game into extra innings, but the Tigers responded resiliently in the 10th. Freshman Alex Urban was the hero for the second time in 3 games, breaking the 3-3 tie with a one-out, pinch-hit single. He won the game on Tuesday with a pinch-hit, walk-off HR in the 9th! If he has one more game-winning pinch hit, I might have to start calling him Urban Legend. The Tigers added 5 more runs in the 10th to win 9-3, and Nick Clayton improved to 3-0 out of the pen. Parker had 3 hits for the second straight game, going 3-5 with his 4th HR in the last 6 games and 6th of the season. Grice added 3 more RBI's, giving him 10 in 2 games
The Tigers completed the sweep in the second half of Saturday's doubleheader, winning 7-2. Nick Hoffmann made his first career start and threw 111 pitches for the first complete game by a Tiger since 2017! The Tigers jumped out to an early lead, scoring at least one run in each of the first 4 innings and took a 6-0 lead into the 7th inning stretch. Grice had no RBI's for the first time in the series but doubled again and went 3-5. Parker and Wagner were each 2-5 with a RBI, and Davis Sharpe, who entered the game just 2-19 at the plate this season, went 3-5 with an RBI. Sharpe hasn't been able to pitch the last couple weeks due to an injury, but perhaps that will get his bat going! Parker is now batting .372 for the season with 6 HR's, and Grice is .343 with 7 HR's.
It was the Tigers' first series sweep since the season-opening series against Cincy and their first ACC series sweep. They have won 7 of their last 8 and improved to 12-9 overall. They host UGA on Tuesday and then go on the road again to play NC State next weekend.
MORE CLEMSON FOOTBALL, BASEBALL AND SOFTBALL COVERAGE HERE