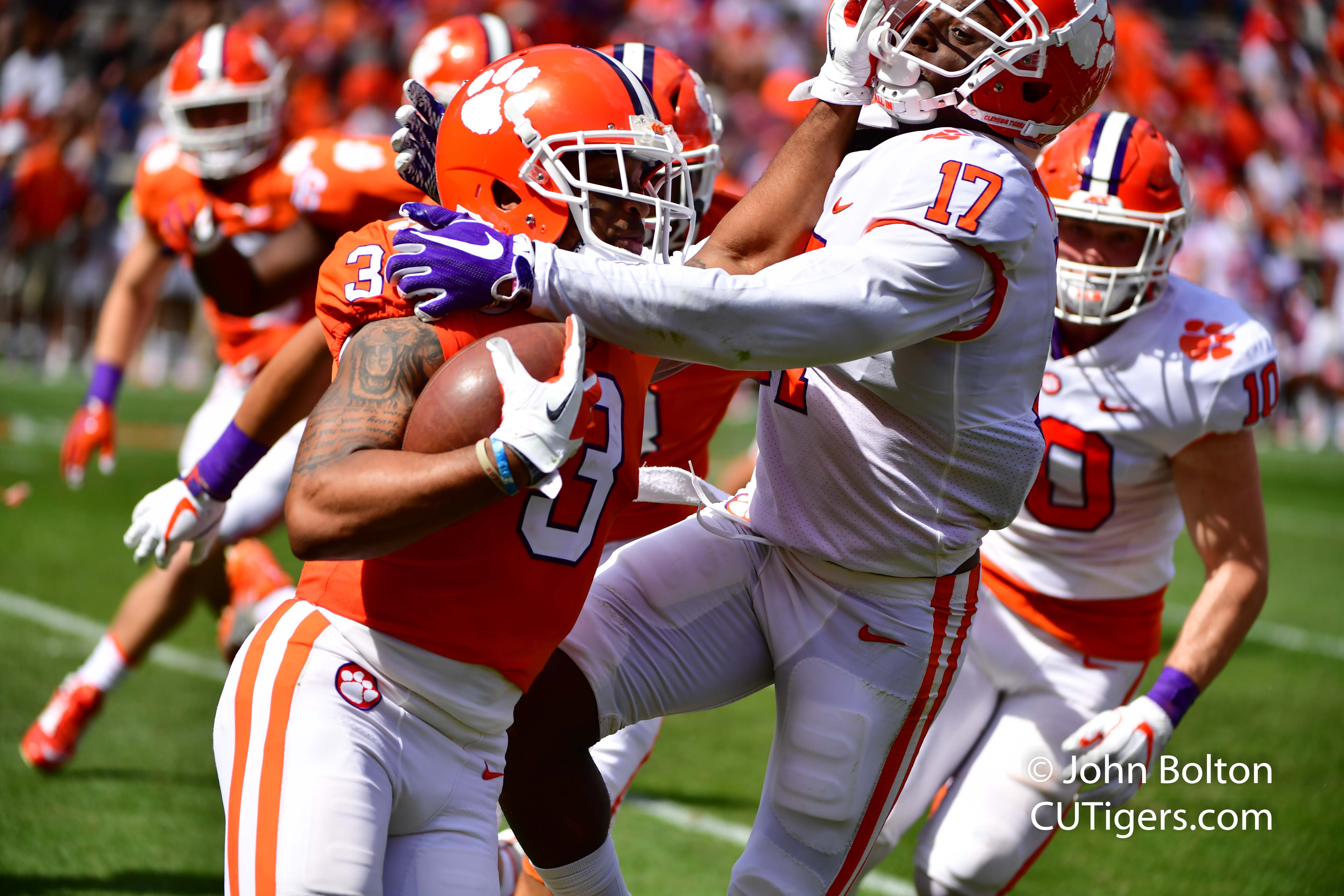 It's been 2 years since we had an Orange & White Game, and it seems like even longer than that! Trevor Lawrence and Travis Etienne will be in Death Valley but wearing street clothes. They will collect their ACC Championship rings with Amari Rodgers, Cornell Powell, Cade Stewart and the rest of the departing Tigers before kickoff at 1:00 on Saturday.
One of the big stories of the spring has been the return of Justyn Ross and moving him to the slot position vacated by Amari Rodgers. It's not every day you see a slot receiver with his size and skill set, so I cannot wait to see that on the field. Unfortunately, we'll have to wait until fall because Ross will not play on Saturday. He has practiced all spring but without any contact as a precaution. So get ready to see a good dose of the brothers Swinney and Will Brown at slot because Brannon Spector will also be out. Several other players will miss the game on Saturday for various reasons, including James Skalski, Baylon Spector, KJ Henry, Nolan Turner, Frank Ladson, Braden Galloway, Lannden Zanders, Mario Goodrich, Malcolm Greene, Etinosa Reuben, Luke Price and freshman safety Andrew Mukuba.
As for those who will take the field, there will still be plenty watch, starting with the quarterbacks. We know what DJ can do after watching his brilliant performances against BC and Notre Dame last season under the highest of pressures. I'm looking forward to seeing how Taisun Phommachanh has progressed. We saw him very little in mop-up duty last season, and he only participated in one of the scrimmages this spring, but Dabo said that he has come a long way. We'll also get to see more of Hunter Helms, who had an auspicious debut last season at Georgia Tech, setting a Clemson record. The reports I have heard said that Helms had an outstanding spring. In fact, he was responsible for all of the touchdowns in the first scrimmage of the spring. He will flip-flop as the second string QB for each team on Saturday.
The running back position is so deep and talented that I can't wait to see how it shakes out on Saturday. With the departure of Etienne, the opportunity for carries is wide-open, and the competition is stiff. I'm particularly looking forward to seeing true freshman Will Shipley, who arrived in January and should still be in high school. Think of Christian McCaffrey as a good comparison, but he's bigger than McCaffrey was as a freshman. He should definitely see a lot of playing time in the fall. The incumbent in the room is Lyn-J Dixon, who has patiently waited for his turn behind Travis, but Chez Mellusi, Kobe Pace and Michel Dukes will all be pushing him for carries. The other freshman back we'll get to see is Phil Mafah. He's got great size, especially for a freshman!
Although we won't get to see Ross or Ladson on Saturday, there will still be plenty to watch at the receiver position. Dabo has raved about the freshmen Collins, Beaux and Dacari (no relation), and he said that Ajou Ajou has had a tremendous spring. Beaux is a former high school teammate of DJ, and they will both be on the Orange team on Saturday. I was able to see EJ Williams up close and personal at a couple practices, and he looks like a gazelle out there! I'm also looking forward to seeing Joseph Ngata, who barely played last season. Let's hope the injuries are finally behind him and that he isn't carried off the field on Saturday! At tight end, look out for the newcomer Jake Briningstool (#9 on White). He is going to be a great one! Davis Allen is also on White, so they have the advantage at tight end. It will be interesting to watch Jaelyn Lay, who didn't play a whole lot last season, for the Orange team. He has a ton of potential!
On the defensive side, Dabo said that Bresee and Murphy are light years ahead of where they were last year, if you can believe that. He said that Bresee does something that makes him take notice in every single practice. Of course, there will be no tackling of the QB's, but I can't wait to see what kind of pressure these two create in the backfield. A big story of the spring has obviously been the transfer of starting SAM/nickel LB Mike Jones, Jr., who will be playing for LSU next season. We'll see Trenton Simpson and Tyler Venables at that position on Saturday with Malcolm Greene and Mario Goodrich both out. Returning starter Derion Kendrick was dismissed from the team, but the Tigers have plenty of talent at corner in Andrew Booth, Sheridan Jones, Fred Davis and newcomer Nate Wiggins (#20 Orange). I'm also excited to see freshman LB Jeremiah Trotter (#54 Orange). OL Mason Trotter will also be wearing #54 for Orange, but I don't think we'll confuse them! Dabo told me that Trotter has impressed him this spring and that he's as advertised. Finally, I'm looking forward to seeing how Xavier Thomas plays on Saturday. He had a tough 2020 season, beginning with contracting COVID on top of his asthma. He was finally coming on strong toward the end of the season but missed the last two games. Thomas will line up with the White team on Saturday.
Click the link below for live coverage of the game and more!
LIVE O&W GAME COVERAGE AND MORE HERE