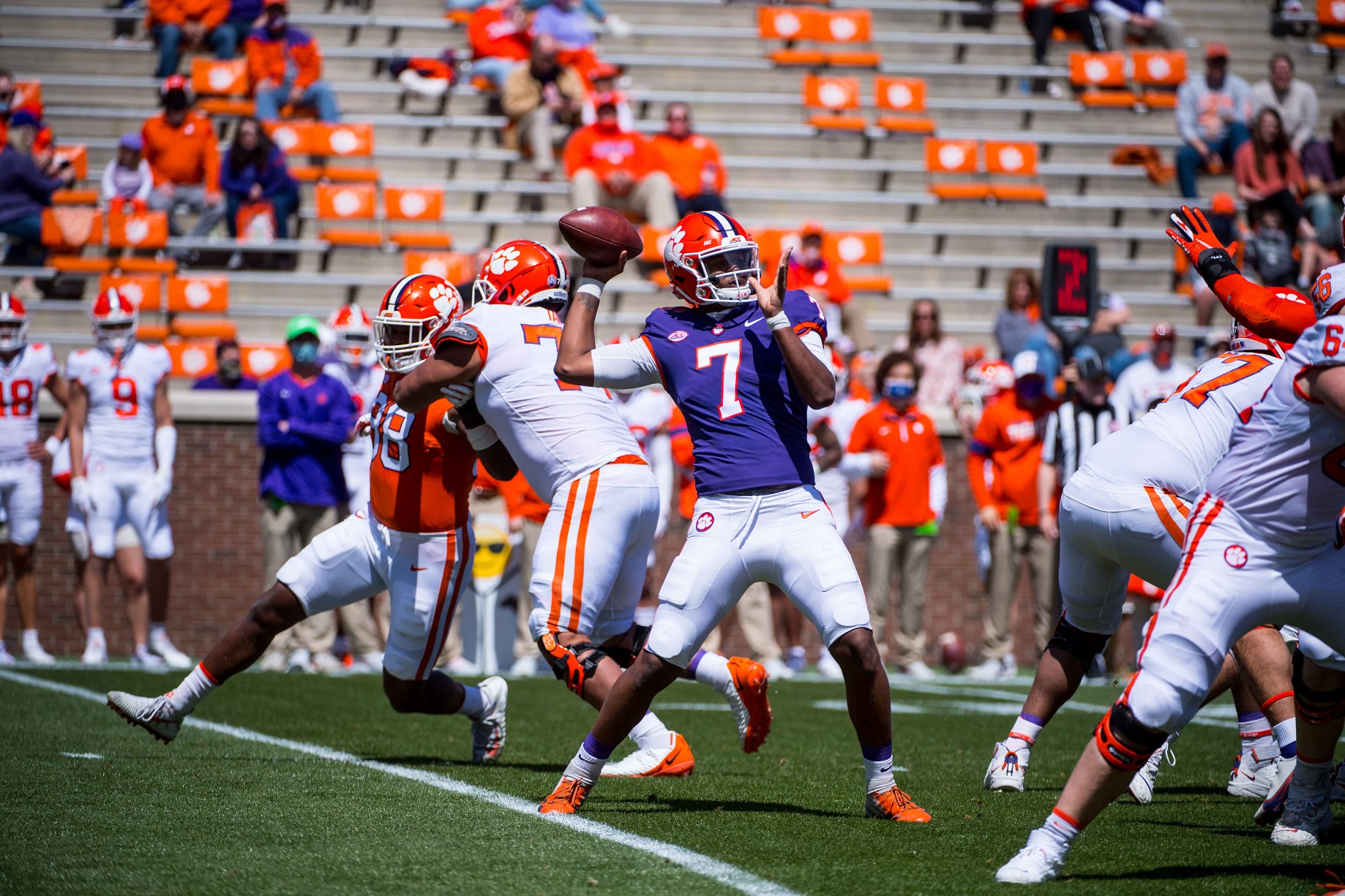 CLEMSON, SC - The defense on both sides dominated the Orange & White Game on Saturday, as White was shutout in the first half, and Orange was held to a field goal in the second. Orange, led by DJ Uiagalelei, led 10-0 at the half and 13-0 in the 4th. However, backup QB Taisun Phommachanh and the White team rallied to score 2 touchdowns in the 4th, taking a 14-13 lead with just under 2 minutes left. Orange had one last chance for a dramatic last-second field goal, but DJ's 30-yard pass fell through the hands of Joseph Ngata, turning it over on downs to end the game.
It was one of the more exciting finishes to an Orange & White Game we've seen, but it was also one of the more tragic. It was a pyrrhic victory for White because just after Taisun drove the team to the 5-yard line to set up the game-winning field goal, he went down to the turf in pain. Dabo would tell us after the game that he likely tore his achilles tendon, which would sideline him for next season. Ironically, it was a non-contact injury, as those achilles tears usually are. The Tigers were already thin at the QB position, and now punter Will Spiers is 3rd on the depth chart until a couple of freshmen quarterbacks arrive on campus this summer. Hunter Helms is now the backup, and he has proven to be capable with an auspicious debut at Georgia Tech last season, setting a Clemson walk-on quarterback record with 2 touchdowns in the game. We are told he had an impressive spring as well, as he was responsible for all of the TD's in the first full spring scrimmage. Helms was 11-16 for 88 yards and an interception while splitting time on both teams on Saturday.
DJ performed pretty well, as spring games go. He was 20-28 for 174 yards with a touchdown and no interceptions. Obviously, he didn't run the ball like you would expect to see in a real game, and the quarterbacks, of course, were off-limits for tackling. Ajou Ajou had the most impressive day on offense, reeling in 6 catches for 102 yards and a touchdown. Dabo told us that he made tremendous strides and had a great spring, and he showcased that on Saturday. I can't wait to see him in the fall with these other great receivers! Joseph Ngata reminded us what he is capable of when healthy, also making 6 catches for 83 yards. He also drew a big pass interference call and nearly made a long catch that would have set up Orange for a game-winning field goal. The freshmen Collins were also impressive. Beaux caught a 14-yard TD from his former high school teammate DJ for the first score of the game, and Dacari had 2 catches for 48 yards. Each of the tight ends, Davis Allen and Jaelyn Lay, also made a couple of big catches. Lay's converted a 3rd and long, and Allen's went for 23 yards to set up the game-winning TD. The running game wasn't a major factor for either team, but Pace rushed for 50 yards, including one 26-yard burst, on the game's opening drive, resulting in the touchdown by Collins. He averaged 11.5 yards on his 6 carries, but he also fumbled on a pitch, recovered by Sheridan Jones. Dixon had just 4 carries but one went for 21 yards. Heralded freshman Will Shipley rushed 6 times for just 13 yards, but he also had a 9-yard catch. The other freshman back, big Phil Mafah, had 6 carries for 38 yards and the game-winning touchdown with 2 minutes left. BT Potter was 2-2 on field goals, including a 54-yarder, which beats his career long.
As for the defense, which was missing several starters, Tyler Venables had to be the player of the game with his 3.5 sacks from his nickel position. With Mike Jones gone and both Malcolm Greene and Mario Goodrich missing the spring game, Venables made the most of his opportunity playing nickel. The redshirt freshman is a very versatile player who can play either safety spot, nickel or dime. His brother, Jake, also had a sack. Ruke Orhorhoro, who was injured most of last season, added 2 sacks. Xavier Thomas, Bryan Bresee, Trenton Simpson, Tre Williams and Keith Maguire also had sacks. RJ Mickens came over from his safety position to intercept a deep throw by Taisun in the first half, and LB Sergio Allen had an INT as well. Freshman corner Nate Wiggins had a great game and nearly came up with another INT.
I will have to watch the replay in order to provide more insight, but I thought it was an entertaining and productive spring game. It probably wasn't as high-scoring as fans would want to see, but there were plenty of big plays by both the offense and the defense, considering how many starters were missing. It's just unfortunate that the game had to end on such a sour note. You always hate to see any injuries in a spring game, but to have your backup quarterback suffer a season-ending injury on one of the final plays of the game is heartbreaking. And it's the Tigers' thinnest position group on the team!
I'll have photos soon, and post-game interviews are below!
MORE CLEMSON BASEBALL, SOFTBALL AND FOOTBALL COVERAGE HERE