Photo by Trevor Groves CUTigers.com
MORE POST-GAME INTERVIEWS
HIGHLIGHTS:
BOX SCORE
CLEMSON, S.C. – The No. 4 Clemson football team clinched a spot in the 2017 ACC Championship game after defeating the Florida State Seminoles by a score of 31-14 on Saturday afternoon in Death Valley. With the win, Clemson improves to 9-1 overall and 6-1 in the ACC, while Florida State drops to 3-6 overall and 3-5 in conference play. 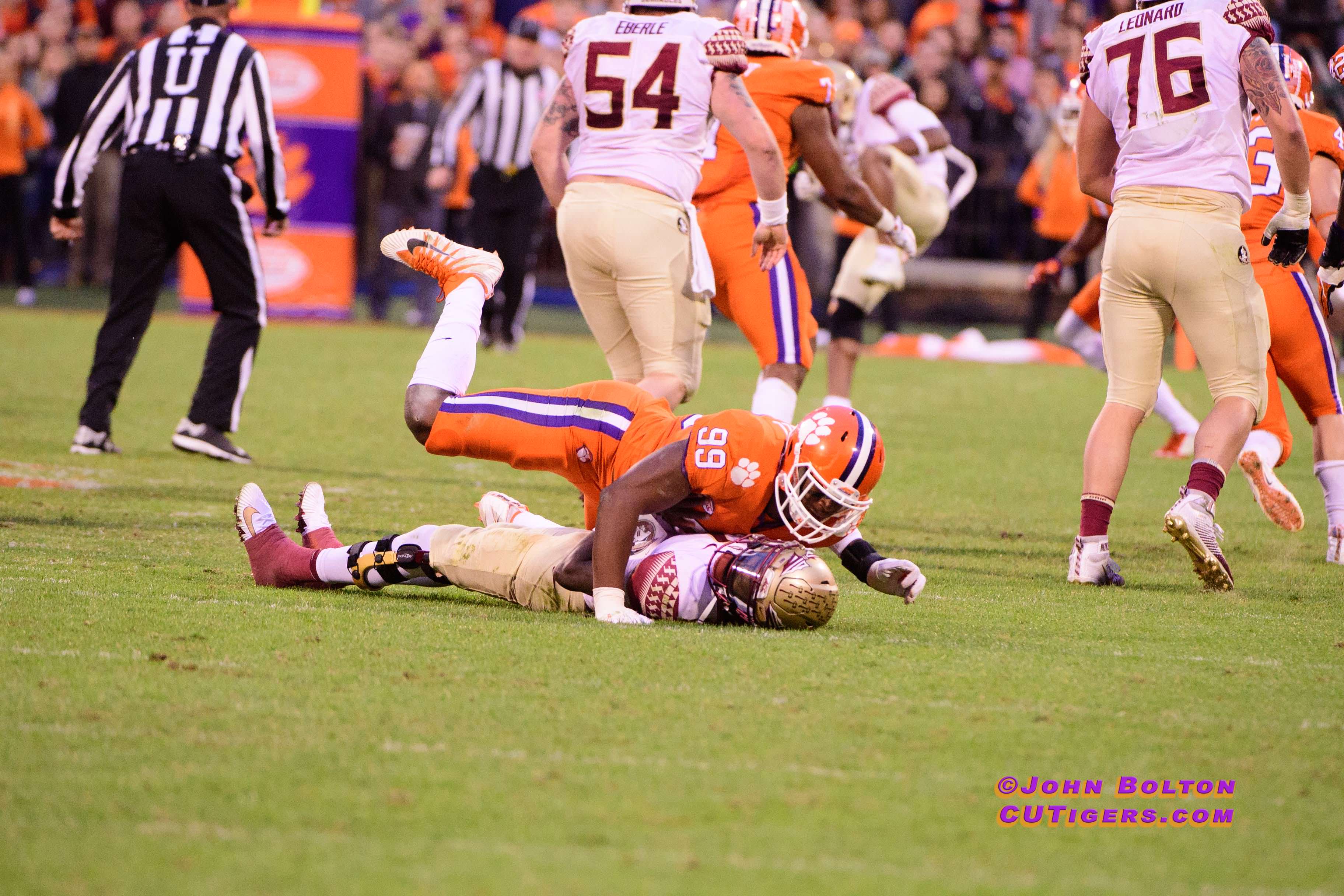 Offensively, the ground game powered the Tigers, as all four of Clemson’s touchdowns were via a run, one each from Kelly Bryant and Adam Choice and two by Travis Etienne. Bryant finished the game with 60 yards on 19 carries, and Etienne ended with 97 yards on 14 carries. On the defensive side of the ball, Van Smith led the way with an interception on what could have been the Seminoles’ go-ahead drive. Smith also had five tackles, and J.D. Davis and Christian Wilkins topped the Tigers with seven tackles apiece. 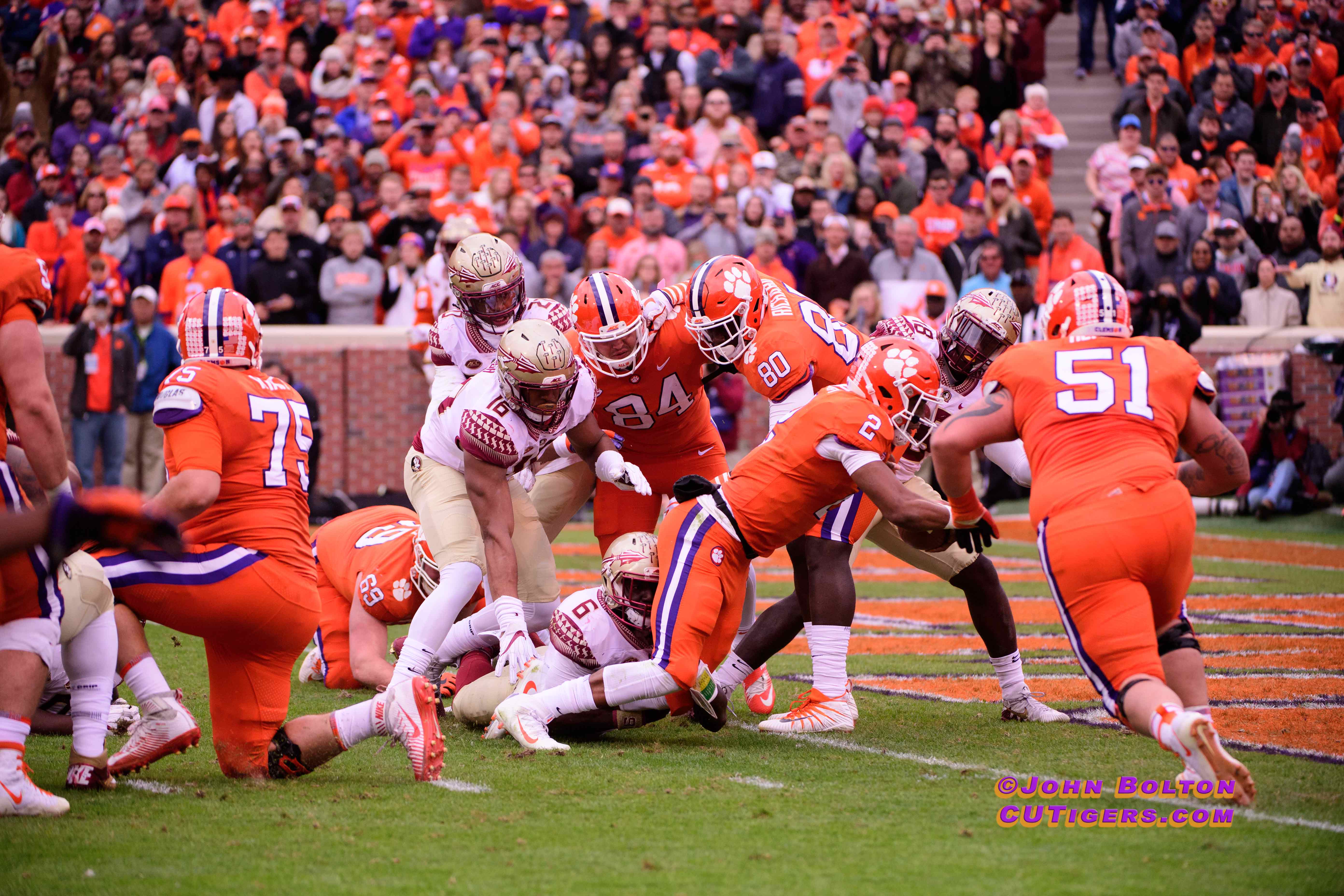 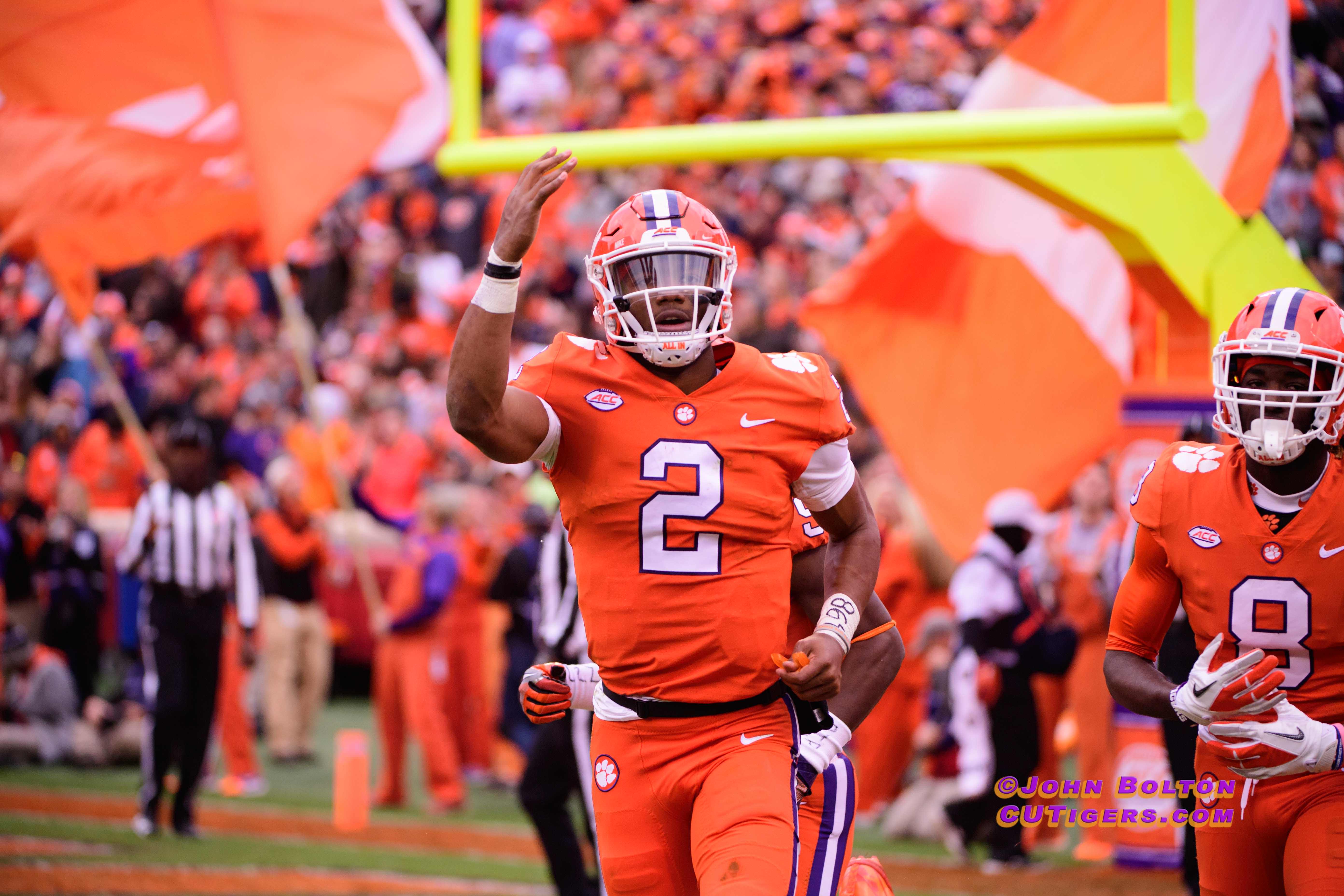 Clemson scored the only points of the first quarter with just under three minutes left in it when Bryant pushed two yards for his 10th rushing touchdown of the season.
Etienne found the endzone with six and a half minutes left in the second quarter, breaking through traffic and powering 28 yards to cap off a one-play drive, set up by a Ray-Ray McCloud 35-yard punt return. The Tigers finished the first half with a 26-yard Alex Spence field goal and took a 17-0 lead into halftime after limiting Florida State to just 46 yards in the first 30 minutes. 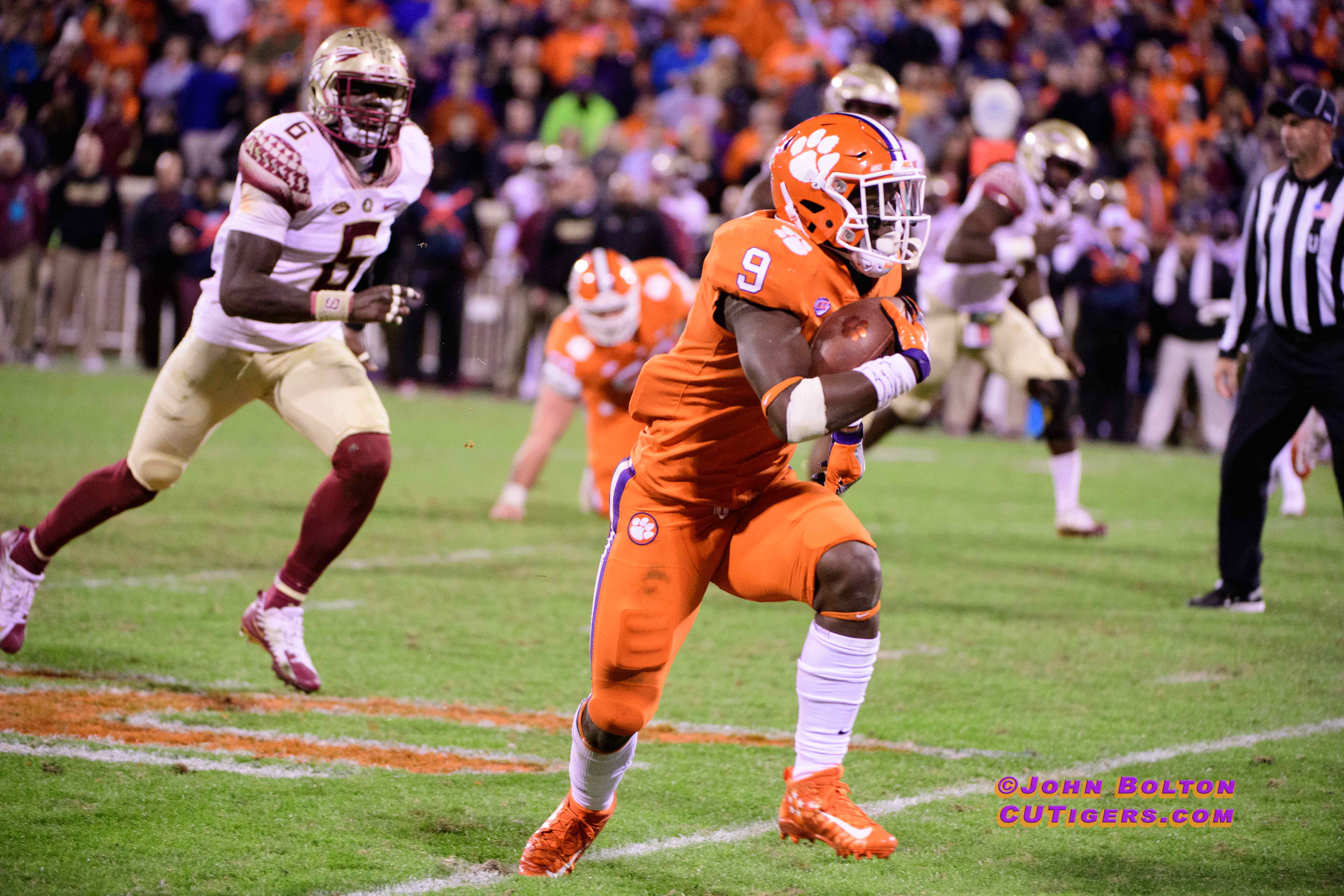 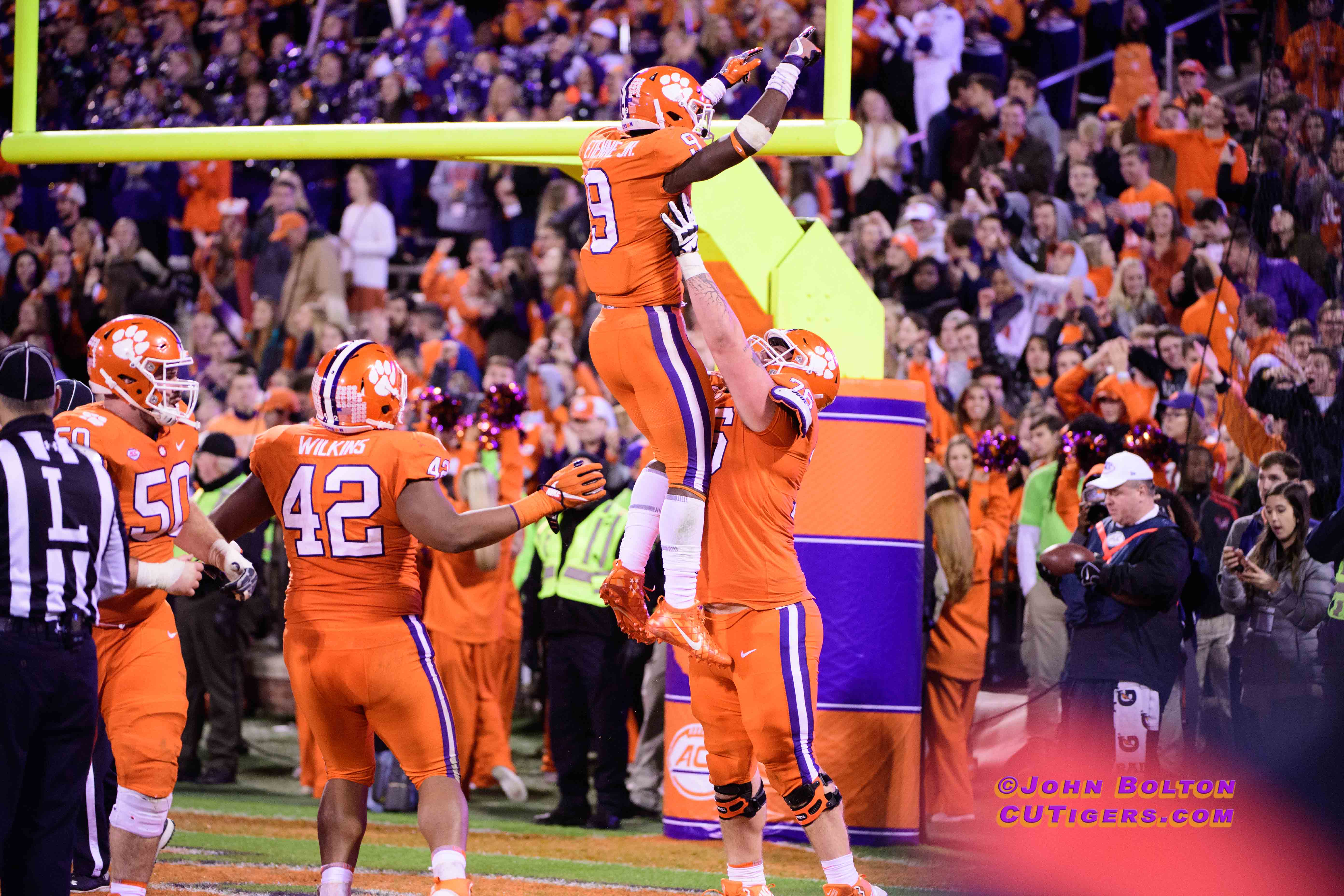 The Seminoles tallied their first points with just over a minute left in the third quarter when Jacques Patrick rushed three yards for a score that cut the Tigers’ lead to 17-7. Florida State then cut Clemson’s lead to just three points midway through the fourth quarter when James Blackman connected with Ryan Izzo for a 60-yard touchdown pass. 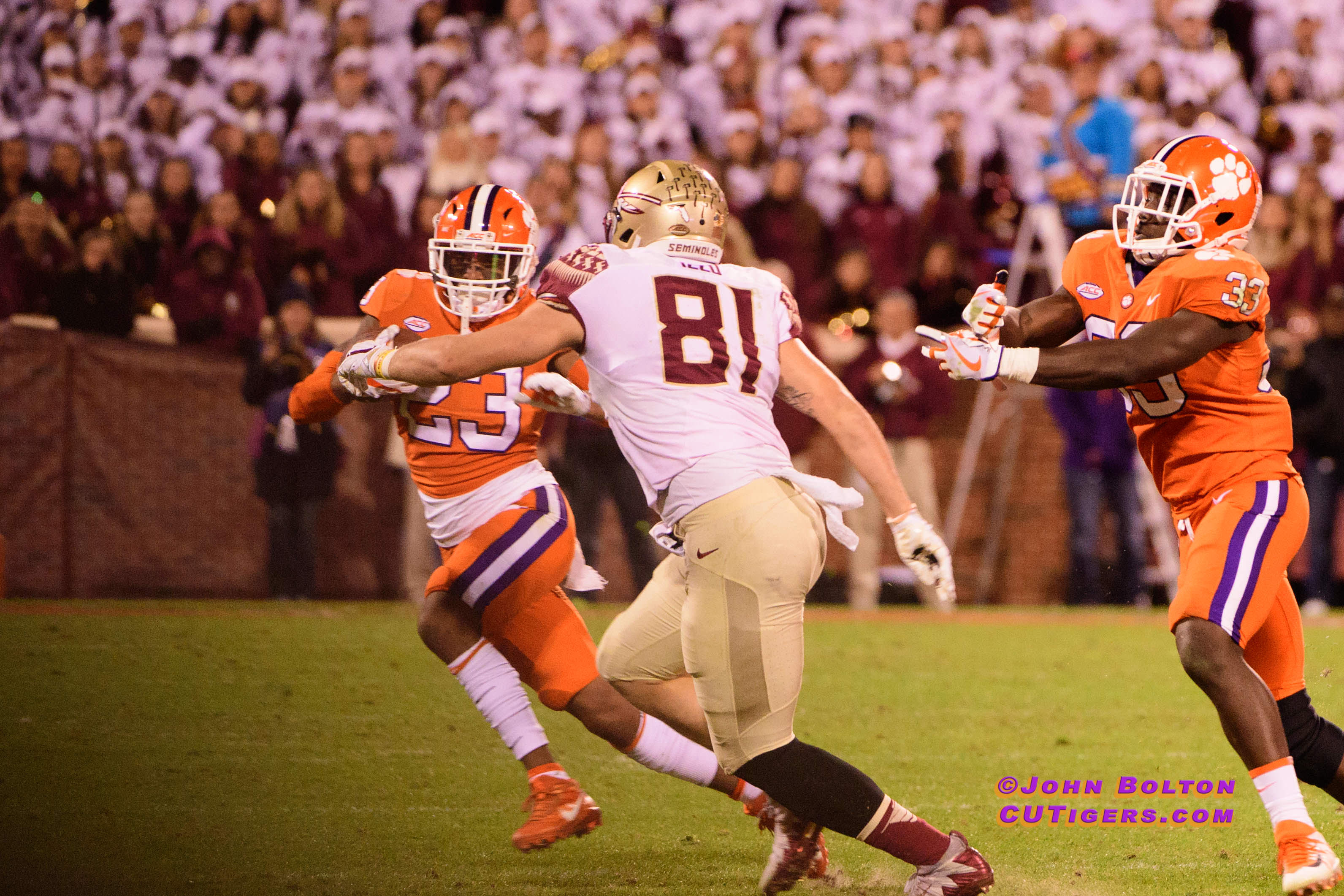 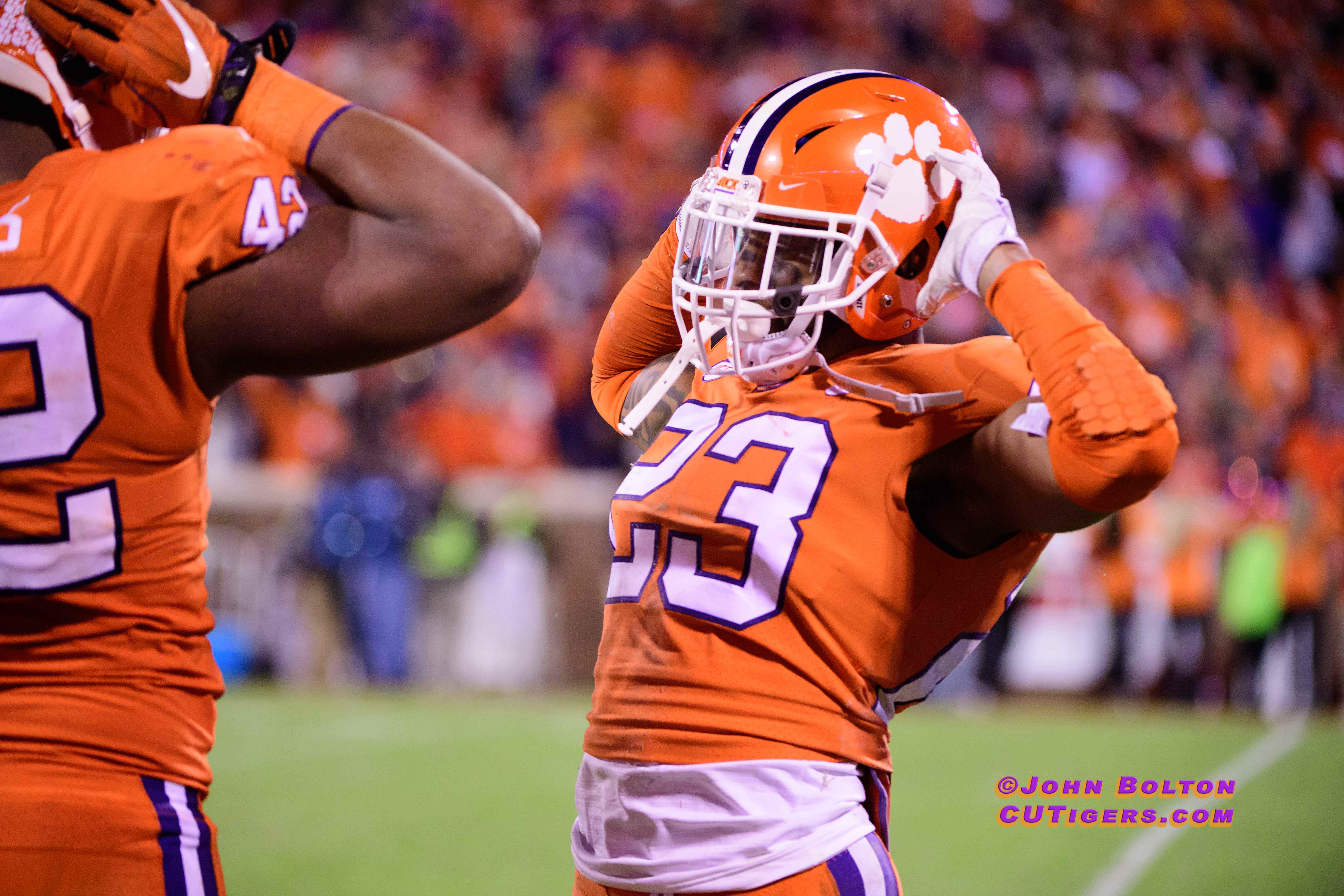 On the ensuing Clemson drive, the Seminoles forced and recovered a fumble, but Smith’s interception regained Clemson possession just one play later and paved the way for another Etienne rushing touchdown that put the Tigers up 24-14 with three minutes remaining in the game. Choice scored the Tigers’ final points of the matchup on a 10-yard touchdown run that ended a drive in which he amassed 28 of his 40 rushing yards on three carries.
Clemson will play its last home game of the season and Military Appreciation game next Saturday against the Citadel. Kickoff is slated for 12:20 p.m. 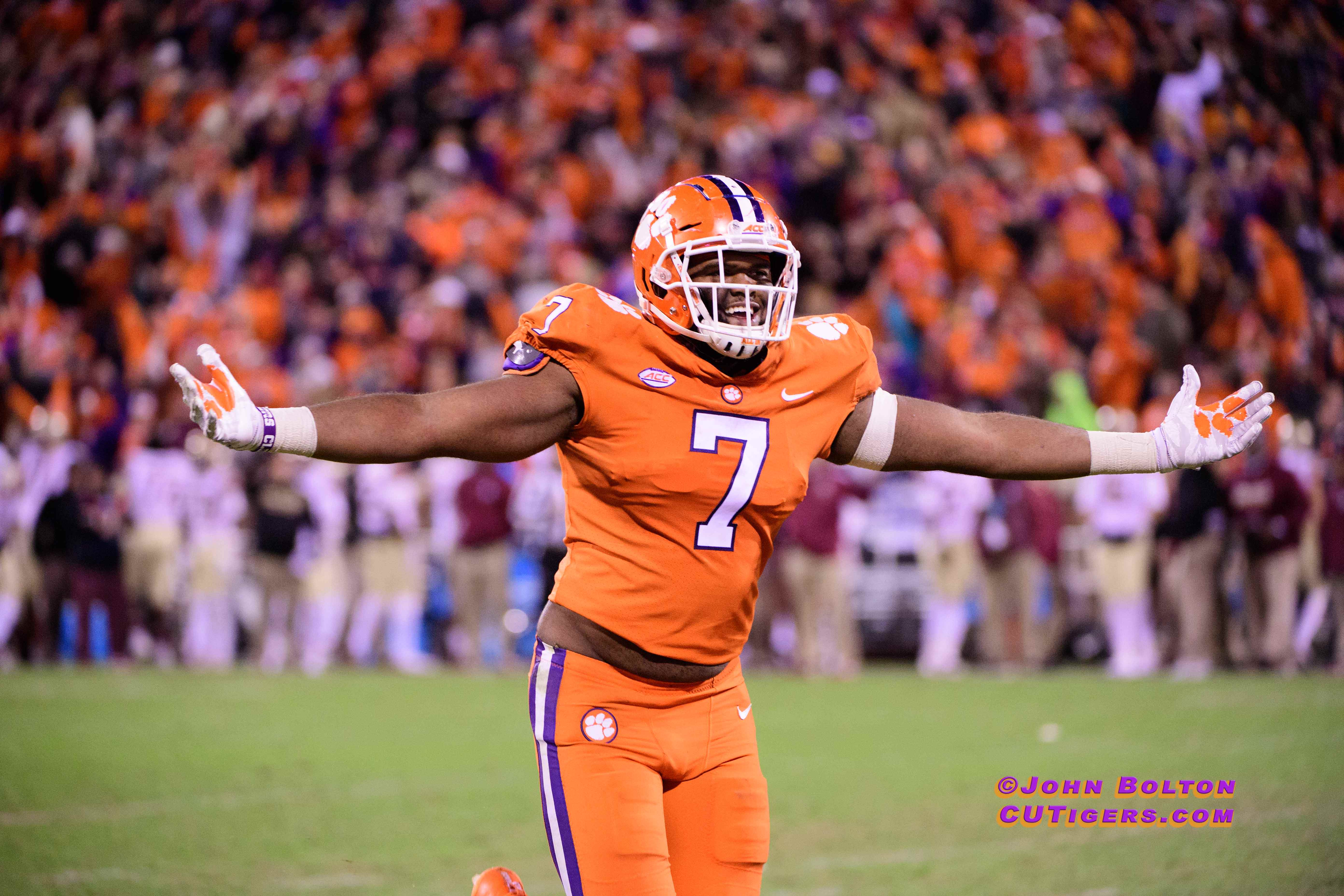 On Clemson winning the ACC Atlantic Division title:“That was the next goal for us. You can’t play for the conference title if you don’t win the division. I’m so proud of this team. Nobody really picked us to win the league this year, and not many picked us to win the division..so I’m glad my guys didn’t get that memo. They just went to work. We’ve had a lot of guys step up and earn it.”

On the victory over Florida State:“To be able to hold Florida State to 21 yards rushing was great. Of course, we had several opportunities to put them away that we missed out on. That’s really the biggest disappointment of the game. We left 11 points on the field in the first half. But, at the end of the day, I’m really proud of our defense. The turnover by Van Smith was huge. For him to get that interception and for us to score not long after that was big. On offense, our rushing game was good. Travis Etienne got loose several times, and Adam Choice had some critical carries toward the end.”

On young players making quality plays:“You saw A.J. Terrell in there. He almost had a pick. J.D. Davis got his first start and played a heck of a ballgame. Also, Chad Smith filled in for Tre Lamarafter he got injured and did a great job for us. K’von Wallace was out there filling in for Tanner Muse and played well. I’m just really proud of our team. All kinds of guys stepped up. We’ve committed to playing these young guys all season and giving ourselves the best path moving forward both this year and into next year, and they’ve played well.”

On the outlook for the Tigers moving forward:“Senior day is next week, which will be exciting. That’ll be the last game in the Valley for our seniors. Then, it’ll be on to the state championship, and then, a chance to play in the ACC title game. We’ll be ready to play. This is an exciting time. It’s playoff football. It really is. Every single week, we’re competing for something new, and that’s what makes it so much fun.”

FLORIDA STATE HEAD COACH JIMBO FISHER Opening statement:“Give credit to Clemson, they played a great game...that was a heck of a college football game. With five minutes to go, we were right there to have a chance, but we let it slip away from of us. Give them credit...they made the plays they needed to to win the game.

It was a great atmosphere, and our kids are learning, and we can continue to grow from this. They competed very hard, played very hard and made a heck of a run to come back and have a chance to be in it, but we need to relax and make the play when we have to. We had some opportunities in the game earlier... some different things, whether it was offense, defense or special teams. We just can't seem to make that play when we need to make it...whether it is picking up a fumble, drop a post, overthrow a couple balls. We had big plays, and we need to relax and make those plays. The heart, the soul and the drive is in those kids, we just have to get them to make those plays at the right time.

Once again, Clemson did a nice job in the game. They have a very good football team, obviously, with the way they are playing. We have to learn to make those plays in that game to give us a chance to be successful, especially on the road in a great environment here at Clemson. We will keep fighting. We have three more games, and we'll play our tails off for three more weeks and finish the season out the right way.”

On standing toe-to-toe with No. 4 team in the country:“Our team will fight, compete and play hard…we just have to learn to play better. Again, if we pick up that fumble, it could have been a 90-yard touchdown. We had two overthrows on two balls that were there, we had a dropped post in the first half, and at the end we just made a mistake...we have throw the ball to the outside.

We have to learn that we want things so bad, and we want to turn things so bad for the people and the fans and the right reasons...not to just have success, that you try too hard at times. You get in your own way. You have to go back in and [follow] the old adage real quick and don’t hurry. But that comes with confidence, that comes with playing well and being used to making those plays, and guys being there. You have to get that and be able to just do it.

On the first half credit to Clemson’s defense:“We didn’t execute, and they controlled us up front. We were pinned back in field position. The first drive we weren’t, but we had a couple things that we missed and didn’t get, and after that, we were pinned back, so you have to be careful. We got used to blocking them and got on things. We got used to the environment…a couple times what happened is the guy on the end of the line of scrimmage didn’t hear the snap count and didn’t hear the clap and got off a half second late, and the guy beats him, which happens on the road in loud environments. That’s part of it, and you have to go through it, but we got back and competed in the game.”

KELLY BRYANT, QuarterbackOn his attitude towards the game and future season:“I’m excited. We won tonight against a really good Florida State team. We won the division, and that’s one of goals in our team meeting room. We get to check that off, and we’re excited to finish out the season.”

On proving himself and the team this season:“Going into the season, not many picked us to be in the position. But we knew who we had in the offensive room...the team, and the type of guys we had that were coming back. All of them were ready to step up into the role and embrace it as well.”

On his mindset after the fumble:“I should have better ball security, and those are things I just need to go back and watch and learn from. It was a good check for us...it was great for the defense to come out and get a turnover right off and go out and finish the last two drives in the red zone.”

HUNTER RENFROW, Wide ReceiverOn leaning on past experiences:“Guys in the junior class...we’re spoiled. We have gone to three straight ACC Championships, and we just have that belief we are going to win.”

On the effort given from Florida State:“They have four and five star [players]...they didn’t just get bad all of a sudden. We knew they were very good defensively as well. They held NC State to its lowest scoring and yardage all year. We knew we were going to get a good defense, and they played well.”

AUSTIN BRYANT, Defensive EndOn how it feels to be going to the ACC Championship game:“It feels awesome to come out here against a really good team with really good skill players and dominate. It is special to win it the way we did. We’re looking forward to our next challenge which is the Citadel, then we will look forward to South Carolina, and then the ACC Championship game.”

On the consistent pressure defense put on Florida State's quarterback:“We were all dialed in. Coach Venables really gave us a chance to get after them. We knew they struggle on the offensive front, so we knew we would be able to get a lot of pressure on them.”

On the Van Smith interception:“That was awesome. It was a critical play in the game. It took away all hope, because our offense got it so deep in their territory and were able to score. It was a big game changer.”

CHRISTIAN WILKINS, Defensive TackleOn the success against Florida State:“We stuck to the game plan and stopped the run game. We did a good job keeping them to short gains and made them two-dimensional. Our guys played with great effort and energy.”

On going to his third straight ACC Championship:“It feels pretty good. It is pretty remarkable. Not every team gets to experience that...winning three divisions. It’s not a right. It’s good to see the work we have put over these past three years I’ve been here pay off. The moments and memories you create with your brothers never get old.”

On having the offense’s back after critical fumbles:“Anytime they have a bad drive or a turnover, the defense makes sure to let the offense know we’ve got their backs. When I’m running on the field, I give them that look to let them know defense is ready. It’s a mistake, but we are on to the next play.”