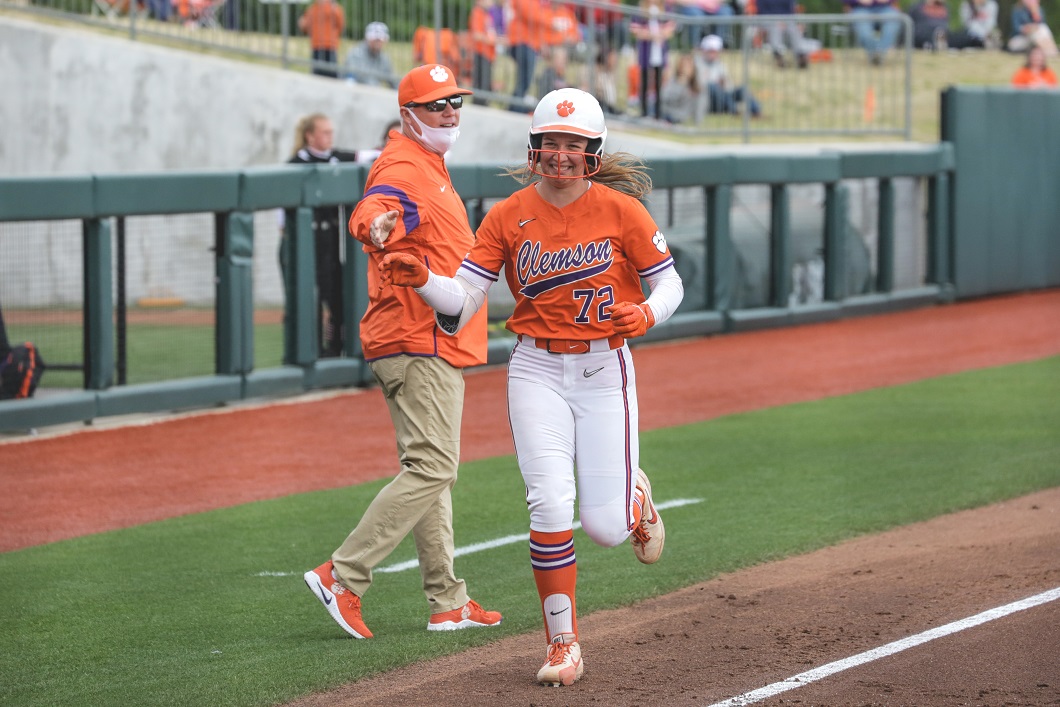 CLEMSON, SC - What a wild finish to the doubleheader with NC State on Friday, and a great way to open the Tigers' last regular season home series! The Tigers dominated the first game, winning 9-3, and they won game 2 in dramatic fashion, on a walk-off double by Guimbarda in the bottom of the 7th. 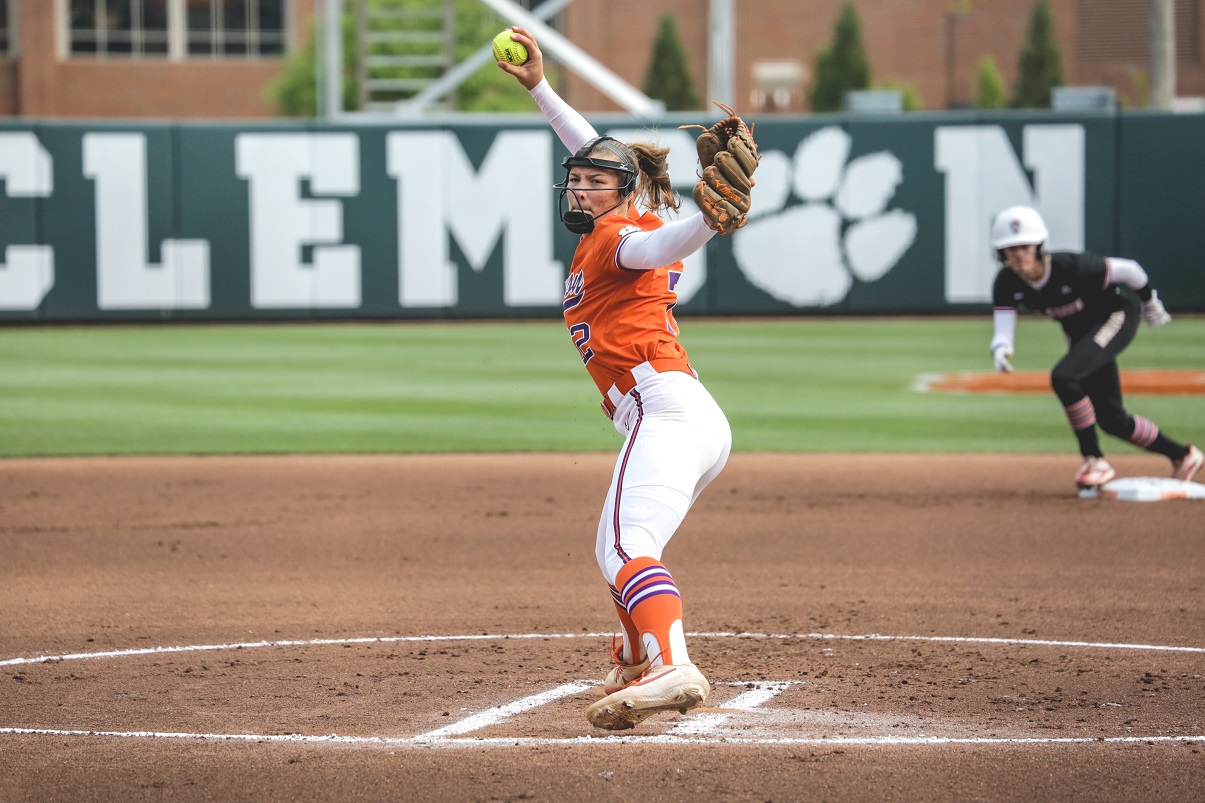 It was a fantastic atmosphere, as the Tigers increased the attendance to allow more fans than previously under the COVID restrictions. The Clemson faithful got to see National Player of the Year candidate Valerie Cagle put on another show, pitching a complete game and hitting a HR en route to the 9-3 win. It was the second-year freshman's 6th game this season hitting a homer while pitching. She hit another homer in the 1st inning of game 2, and true freshman McKenzie Clark hit a 2-out, 2-run HR in the 2nd to put the Tigers up 3-0. Cagle and Clark have each homered in the last 3 games, and Cagle leads the team with 12. After scoring 12 runs in the first 8 innings on Friday, however, the bats went cold for the next 4 innings, and State would tie the game 3-3. In the bottom of the 7th, State made the fatal decision to intentionally walk the red-hot Cagle with one out, and Marissa Guimbarda, who also homered in the first game on Friday, hit a walk-off double to score Cagle from 1st and win the game. 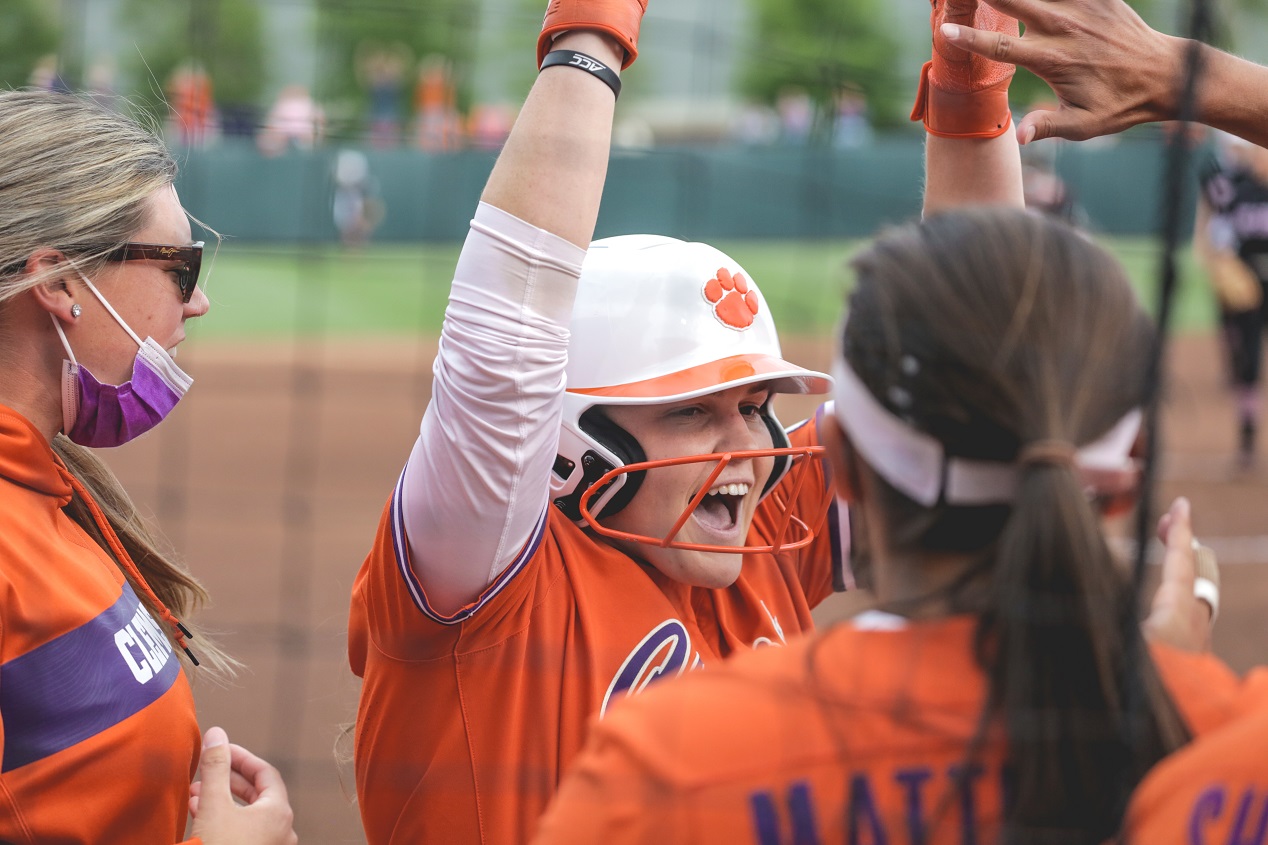 The Tigers have won 15 straight and 32 of their last 34. I asked Coach John Rittman after the game if he had ever gone on a run like this in his years at Stanford, and he said no, calling this a magical team. I also asked him if Valerie Cagle belongs in the conversation for National Player of the Year, and he said she does without question. Rittman coached a National Player of the Year at Stanford, so he knows one when he sees one! Cagle is batting .408, and there are only 20 hitters in the Power Five with more HR's. Add that to the fact that she is 4th in the Power Five in ERA at 0.86, and she is without a doubt the most special and valuable player in the nation. Cagle is like the softball version of Roy Hobbs, and she's only a second-year freshman! It's truly remarkable what she's been doing and what this Clemson team has been doing in just its second year of existence. I can't wait to see what they do in the ACC Tournament and beyond!
The Tigers will finish out the home regular season slate in a doubleheader against NC State on Sunday, and I'll be at McWhorter Stadium to bring you live coverage. My post-game interview with Rittman is below!
MORE CLEMSON BASEBALL, SOFTBALL, SOCCER AND FOOTBALL COVERAGE HERE