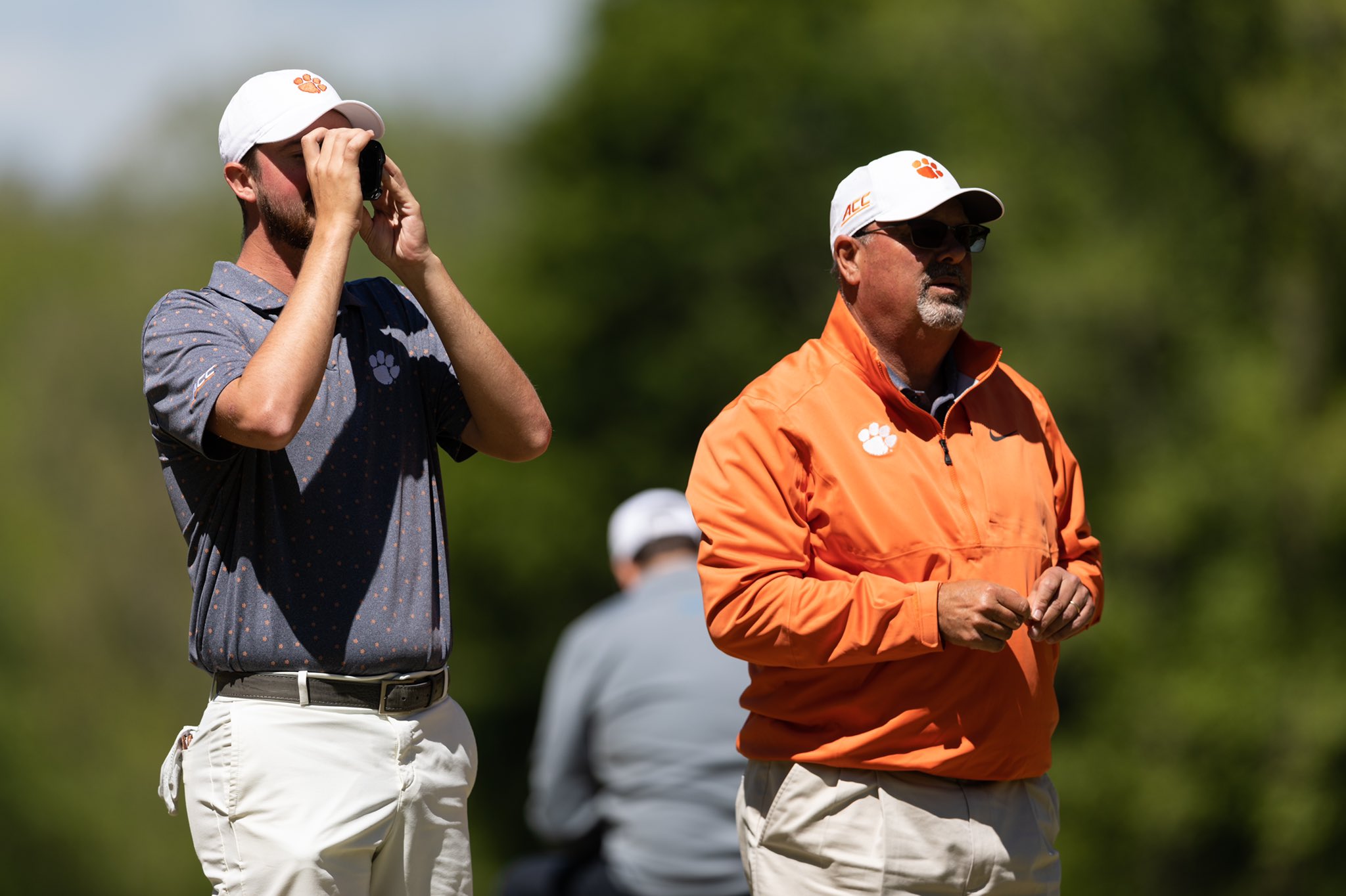 
IN PENLEY'S FINAL SEASON, NO.4 CLEMSON GOLF ADVANCES TO ACC CHAMPIONSHIP ROUND vs. NO.2 FSU

Atlanta, GA—Colby Patton made a four-foot putt birdie putt on the second playoff hole to win his match and give Clemson a 3-1-1 victory over NC State in the semifinals of the ACC Men’s Golf Championship at the Capital City Crabapple Course in Atlanta, Ga. The Tigers will face Florida State in the championship match on Monday at the same facility. The first match will begin at 9:00 a.m.

The Seminoles defeated North Carolina in the other semifinal, 4-1. The Tar Heels had won the 54-hole stroke play qualifier by 15 strokes over Clemson, and 31 shots over Florida State. Clemson and Florida State are the two highest ranked teams in the ACC according to Golfstat. The Tigers are fourth and Florida State is second.

Just five minutes  after that match ended, Maximilian Steinlechner won final hole to beat Clemson’s Zach Gordon 1-up.  Gordon, Clemson’s number-five player, stayed with the nation’s 47th ranked player the entire match and even had a 2-up lead at one point.

Clemson took a 2-1 lead when Jacob Bridgeman closed out NC State’s best player 24th ranked Benjamin Shipp with a birdie on the 17th hole of the match to win 2 & 1.  Bridgeman had taken a 4-up lead on the opening nine, but Shipp battled back to cut the margin to 1-up with two to play. But, Bridgeman made a 22-foot birdie putt on the eighth hole to win.

Patton and Carter Graf were in a tight match all day. They were tied after 12 of the 20 holes they played.  With the match tied, Graf made an incredible up and down from 80 yards out left of the hole. He had hit his second shot in the middle of the eighth fairway. But he made a 10 foot par putt, forcing Patton to make a five footer to force extra holes.

The reverse happened on the first playoff hole, the 10th hole on the course, when Patton hit a wayward second shot.  But, he got up and down by making a 12-foot par putt that had a foot of break in it.

Patton put the match away with a birdie on the 11th hole, the 20th hole of the match. “I knew if I could just made a birdie I could win this match,” said Patton, son of former Clemson All-American and US Amateur Champion Chris Patton. “ But I just couldn’t put him (Graf) away. “Finally, I hit it down the middle on 11 and had 116 yards to the pin.  I hit a good wedge shot to within four feet and made the putt to win.”

“That was some performance by Colby,” said Penley. “He hit a great shot on 11 to have a short birdie putt, but the par on the first playoff hole was amazing. What an up and down.”

Clemson and Florida State have played in the same tournament four times this year with each team coming out ahead twice. The stroke difference is just 16 shots in favor of Clemson.

This is Clemson Legend Larry Penley's final season, as he announced his retirement earlier this spring. Click on the link below for live updates during Monday morning's Championship Round!