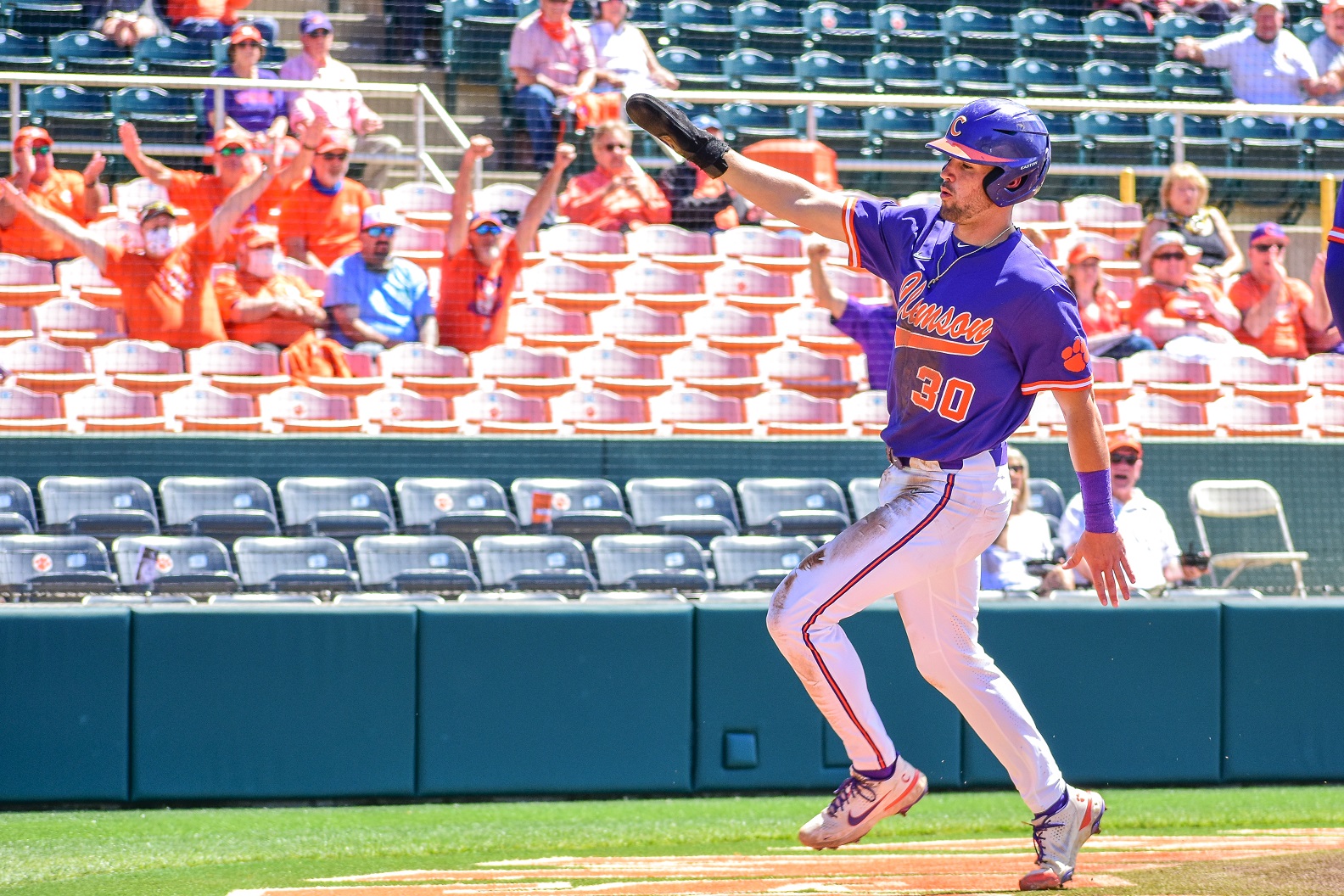 CLEMSON, SC - As I was in the press box at McWhorter Stadium covering the softball series, I had the baseball doubleheader on my computer and could hear the roars from near by Doug Kingsmore during a doubleheader that was just about as exciting as the one I was witnessing from the ladies! With the score tied 4-4 in the bottom of the 9th, Davis Sharpe hit a 2-run, walk-off bomb over the grand stands in left to win the first half of the doubleheader 6-4. It was Sharpe's first hit of the series after going 0-7!
The Tigers took an early 3-0 lead in the 1st thanks to a 2-run HR by Grice and a 2-out score by Sharpe on a wild pitch, but Wake tied it in the 4th on a 2-out, 3-run HR after Askew issued his only walk of the game and 4th of the season on full count. The Tigers went back ahead 4-3 in the bottom of the 4th on a double by French, and Askew went 5.1 innings, allowing 5 hits with 6 K's. Hughes and Gilbert each pitched scoreless innings, but Clayton gave up a game-tying HR with one out in the 9th, stealing the win from Askew. Meredith continued his hot hitting from Friday, going 2-5, and Grice was 2-5 as well. French was 2-3 with a walk and the RBI double.
In the second half of the doubleheader, the Tigers trailed 2-0 until the 5th when Teo was able to score thanks to back-to-back errors by Wake. They added 2 more to take a 3-2 lead in the 6th thanks to a sac fly by Sharpe and solo HR by Brewer. Parker had probably his worst series of the season at the plate, going just 1-11, but his one hit was a big double that enabled him to score on the Sharpe sac fly. In his first start in 3 weeks, senior Mat Clark did a great job on the mound, going 5.2 innings with one earned run and no walks in the no-decision. The Tigers took the lead just after Clark came out of the game, so freshman Nick Hoffmann, who closed the game on Friday night, earned the win, going 3.1 hitless innings with no walks.
What a weekend to be a Tiger! The baseball and softball teams went 7-0, AND the No.4 golf team advanced to the ACC Championship round in Atlanta! The baseball team desperately needed a sweep this weekend, and they got it. Hopefully, that will give them some confidence and momentum when a top-5 Louisville team comes to town next weekend. The Tigers' NCAA hopes are still on the ropes, but they have plenty of opportunities to build their resume with series against Louisville, Georgia Tech and FSU still on the schedule before the ACC Tournament.
Post-game interviews are below!
MORE CLEMSON BASEBALL, SOFTBALL, SOCCER, GOLF AND FOOTBALL COVERAGE HERE