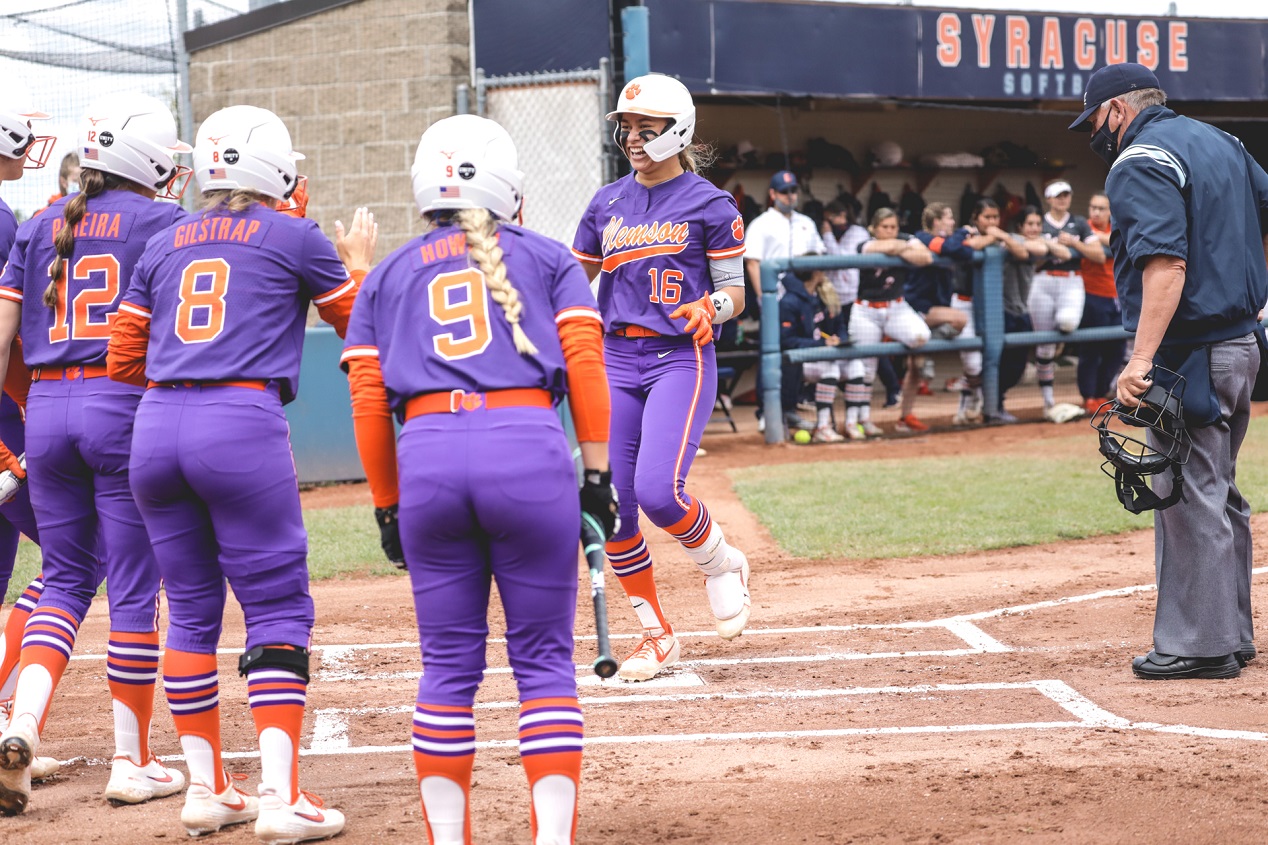 SYRACUSE, N.Y. — The Clemson Softball team’s 19-game winning streak came to an end on Saturday afternoon at the hands of the Syracuse Orange (20-22, 12-19 ACC), who took the second game of Saturday’s doubleheader in walk-off fashion by a score of 7-6. The loss marked the first time the Tigers, now 39-5 overall and 28-5 in ACC play, have ever lost when scoring five or more runs, and dropped them to 41-1 all-time in such games. Game 1 Recap

Despite going 3-for-4 at the plate with two home runs and five RBI, starting pitcher Valerie Cagle (25-4) suffered just her fourth loss of the season. Syracuse pitcher Alexa Romero earned the win and moved to 8-9 on the campaign.

Clemson’s Marissa Guimbarda carried her momentum from game one into the first inning of game two, when her sacrifice fly plated McKenzie Clark for the first run of the game. Syracuse responded with a four-run second inning, but Cagle erased the Tigers’ deficit with one swing of the bat, a three-run shot to right field, which knotted the game at four apiece in the top of the third.

In the bottom of the frame, Syracuse regained the lead after a wild pitch allowed the Syracuse runner on third to score. However, Cagle once again refused to let the Orange lead stand, as she hit yet another homer, her 14th of the season, in the top of the fifth on a line drive over the left-center field wall.

After a scoreless sixth inning, two one-out singles set the stage for Cagle yet again, who yet again came through for the Tigers. Cagle sliced an RBI-single down the left-field line to score Clark and give Clemson a 6-5 lead.

Capitalizing on an infield hit, an error, and a fielder’s choice that did not result in a single out, the Orange loaded the bases in the bottom of the seventh inning. Cagle struck out the following batter, but Geana Torres’ single up the middle scored both the tying and winning runs as the Tigers lost their first game since March 26 against Duke.

SYRACUSE, N.Y. — In the program’s first opportunity to do so, the Clemson Softball team won the ACC regular-season title after defeating Syracuse 19-2 in Sunday’s season finale at Skytop Softball Stadium. As a result of Sunday’s victory, the Tigers became the first team in Clemson history to secure a conference regular-season title in its first year of having the opportunity to do so. Clemson’s ACC-clinching win on Sunday was highlighted by a spectacular offensive performance by second-year freshman Alia Logoleo. The Tigers’ infielder/outfielder hit three home runs: a grand-slam, three-run and two-run shots, as well as an RBI-double. The offensive outburst resulted in a program record ten RBI’s, most by a player in a single game in the NCAA this season.
The momentous accomplishment comes in the team’s second season, and first that projects to be played to its planned conclusion. After a promising start to the 2020 season halted by the COVID-19 pandemic, Clemson Softball picked up where it left off and then some, thus far culminating in the ACC regular-season title. The Tigers are the first ACC team to win the regular-season crown in its first full season.
The success was spearheaded by the brilliance of second-year freshman Valerie Cagle, who is third in the ACC in ERA (1.15), tied for the ACC-lead in home runs (16) and second in batting average (.437). The standout’s striking performance has landed her amongst the finalists for USA Softball Collegiate Player of the Year.
In addition to Cagle’s dominant pitching all year long was true freshman pitchers Millie Thompson (9-1) and Regan Spencer (6-0), as well as a near-perfect defense all season, which boasted a .973 fielding percentage entering Sunday’s contest, good for second in the ACC. Complementing Cagle, the Tigers reaped the benefits of leadoff hitter McKenzie Clark and clean-up hitter Marissa Guimbarda. Clark entered Sunday’s game second on the team in batting average (.361) and led the ACC in runs scored (43) and triples (6). She added two more runs on Sunday. Despite missing four games on the year, Guimbarda entered the day with 13 long balls on the season, good for fifth in the conference.
The Tigers wasted no time getting on the board as a passed ball allowed the first run in Clark to cross the plate. The next batter, Logoleo, rocketed a ball deep to left field for a three run home run that gave Clemson a 4-0 lead in the first inning.
Following two more Clemson runs, Logoleo kept her foot on the gas and hit a second-inning grand slam that pushed the advantage to 10-0. Her career day was not finished as she blasted her third home run of the game, this time a two-run shot, to extend the lead to 13-0 in the third inning. Her third home run plated her then-ninth RBI of the contest, besting Cagle’s program record of eight set on Feb. 15, 2020 against Maryland.
Logoleo stepped to the plate in the fifth inning with the opportunity to hit a fourth home run, but instead settled for an RBI-double that gave the Tigers a 14-2 lead and set the NCAA Division I season-high mark for RBI in a game. Five more Tigers scored in the fifth and Regan Spencer came in to close out Millie Thompson’s ninth win of the season in the circle, and the Tigers streamed out of the dugout to celebrate their unprecedented achievement.
Up next, the top-seeded Tigers will face the winner of the winner of the No. 8 and 9 matchup of the 2021 ACC Softball Championship on Thursday at 11 a.m. ET at Ulmer Stadium in Louisville, Kentucky. All 2021 ACC Softball Championship games will broadcast on ACC Network with the exception of Saturday’s title game, which will air on ESPN2 at noon. 2021 ACC Tournament Bracket
For complete coverage of the Clemson Softball team, follow @ClemsonSoftball on Twitter, Instagram and Facebook.
MORE CLEMSON SOFTBALL, BASEBALL AND FOOTBALL COVERAGE HERE