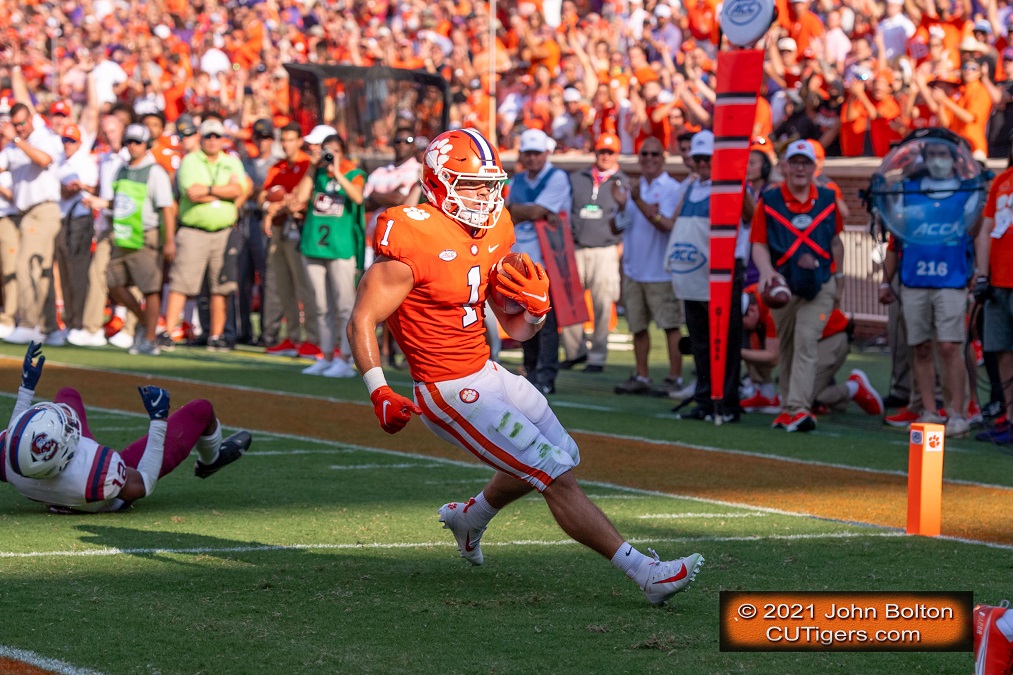 Photo by John Bolton
CLEMSON, SC - Well, I nailed my score prediction this week! My 52-6 prediction was just 3 points off for each team, and the Tigers missed a long field goal at the end of the first half.
Like I said on Tuesday, it was a total travesty that the Tigers dropped out of the top 5. Ohio State lost at home to Oregon, Oklahoma barely beat Tulane at home and A&M trailed unranked Colorado late in the 4th quarter with only 3 points scored! And the Buffs' defense is nowhere near Georgia's defense. Not to mention that it wasn't an opener for A&M like it was for the Tigers last week. We'll see if the Aggies take the same criticism that the Tigers did after the Georgia game. The Tigers will be back in the top 5 on Sunday, and as far as I'm concerned, their top-5 streak is still alive, and they will break Bama's all-time record at the end of the season. We'll just add an asterisk: "Week one AP Poll was absolute garbage."
As for the Tigers' performance on Saturday, it couldn't have been much better on all fronts. The start for the offense was just what the doctor ordered after a week of hearing from the national media and even many Clemson fans that the offense stunk last week. I kept saying that it had more to do with Georgia having a great defense than the Tigers' offense being weak. And of course, there were some opening-game bugs to work out as well, as there invariably are. Look at how Georgia lit up the scoreboard on Saturday as well after the Tigers held their offense to just 3 points last week. And that was with their backup quarterback! 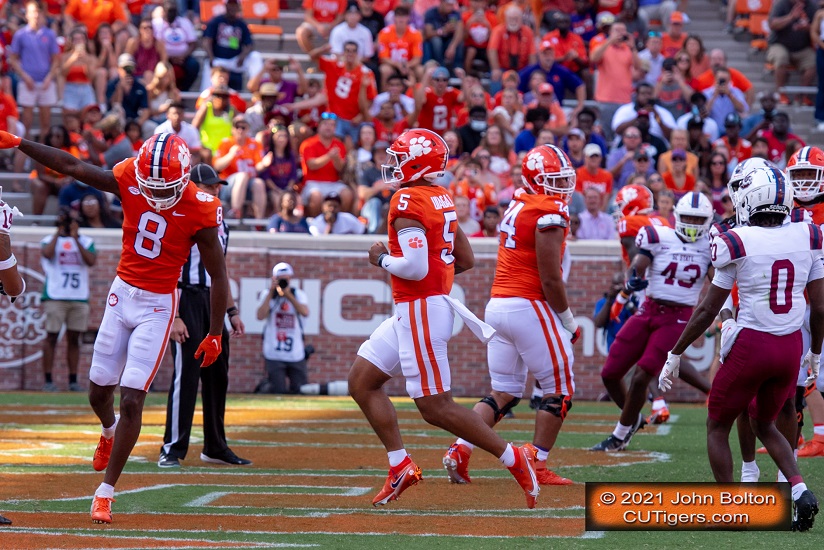 The Tigers were on offense to start the game, thanks to SC State winning the toss and deferring, and that's probably just what Dabo wanted. DJ and the offense marched down the field on the opening drive, beginning with Dixon ripping off a 16-yard run on the first play from scrimmage. That was also a welcome sight for Clemson fans after the backs combined for just 24 yards on 9 carries (DJ had -22 net rush yards thanks to the 7 sacks). With a couple completions to Ross and Ladson mixed it, Pace added a couple runs for 20 yards and Shipley ran twice for 12, so all three backs featured prominently on the very first possession. That set up a 4-yard touchdown by DJ on a designed quarterback run, something that was also severely lacking last week. So congratulations to those of you who predicted that the Tigers' first TD of the season would be scored on a run by DJ! The Tigers would score touchdowns on their first 4 possessions and were 7-7 in the red zone, so they looked like a well-oiled machine on Saturday. What a difference a week makes! The Tigers scored 5 rushing touchdowns: 2 by DJ, 2 by Shipley and one by Pace. After a lackluster return last week, Ross scored his first TD since 2019 and should have had another one. He was wide open in the end zone, but DJ threw it high, and Ross mistimed his jump a little bit. Still, DJ could have made it an easy score with a better throw. I think he rushed it because Ross was so open. Ngata followed up his career performance last week with another good game, catching 3 passes for 51 yards. More importantly, it was another injury-free game for him! 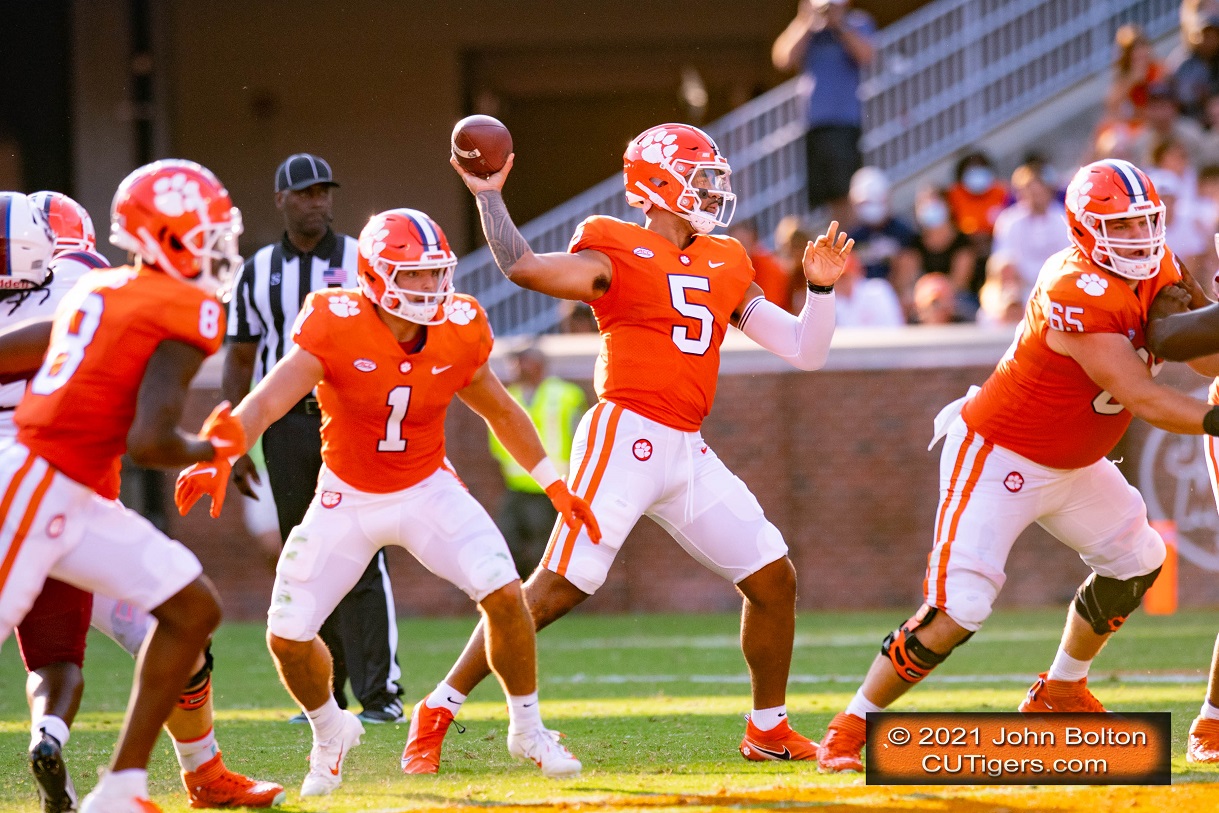 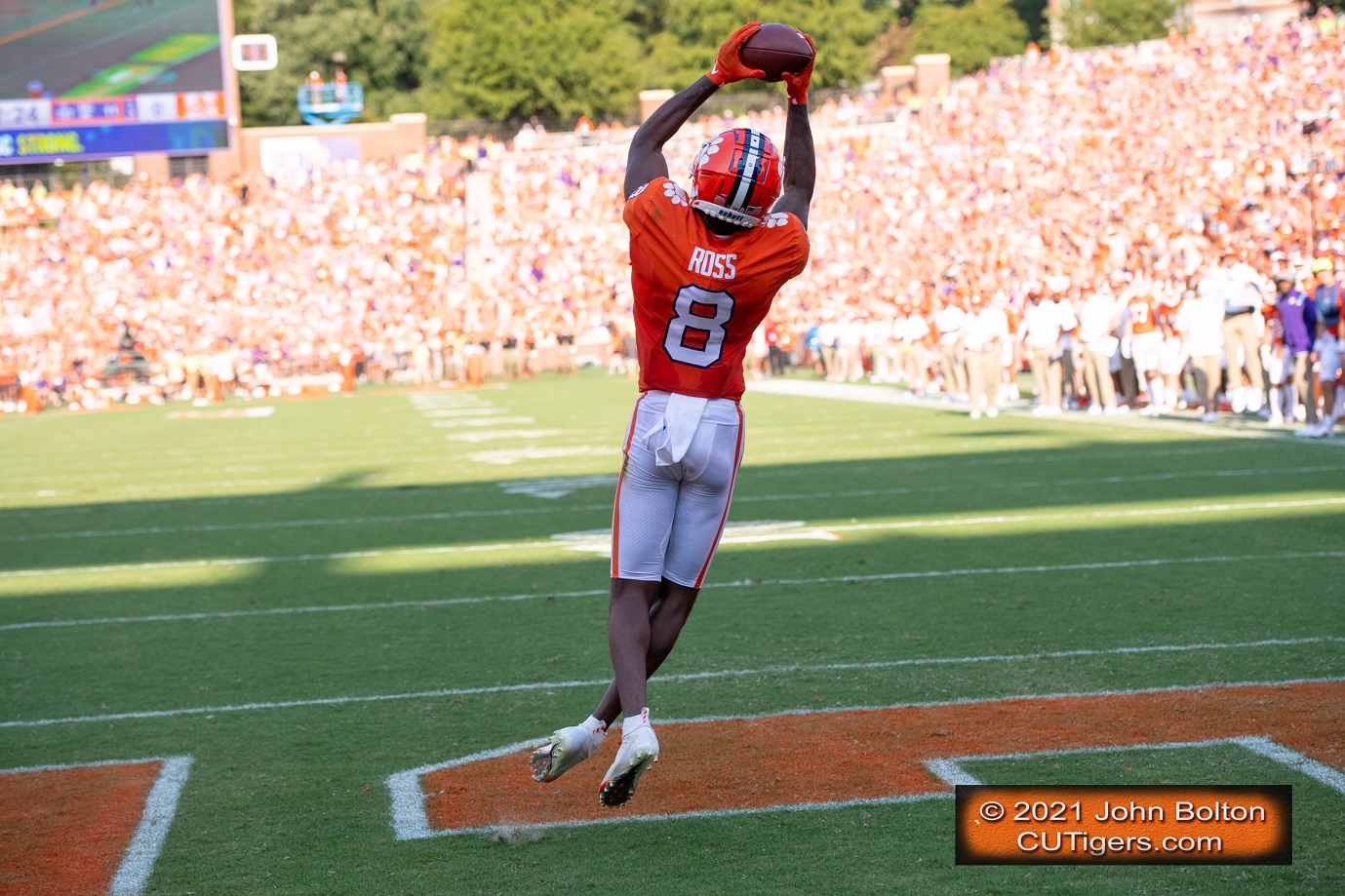 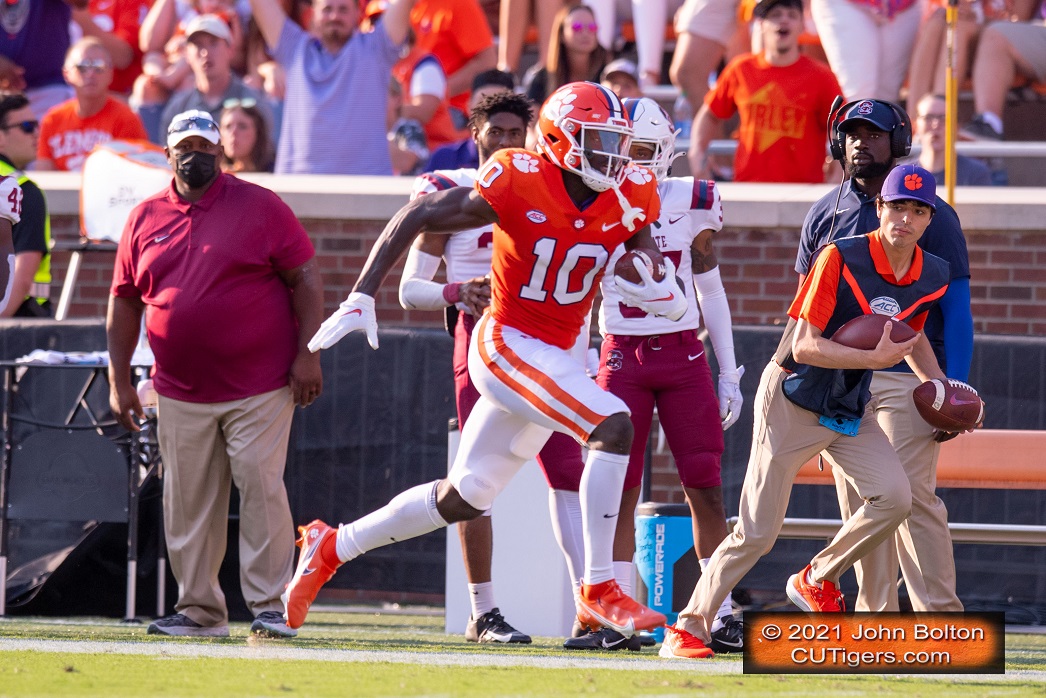 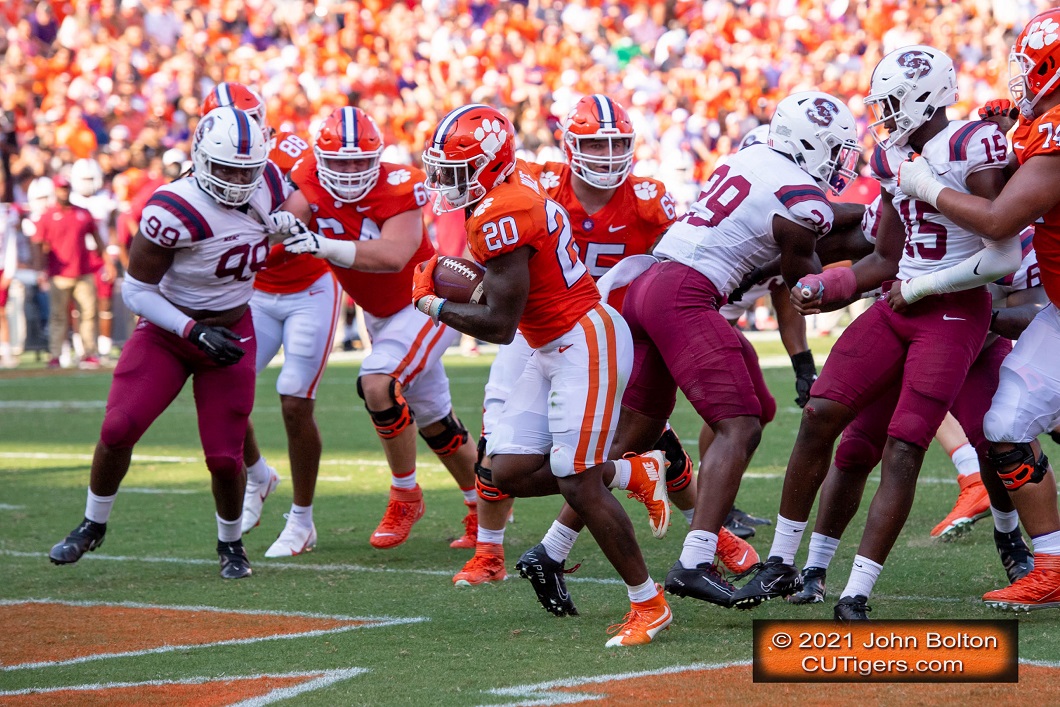 As for the defense, they didn't need any redemption. All they did was follow up their magnificent performance last week with another one on Saturday, allowing just 3 points for the second straight game. It's the first time since 2017 that the defense has kept the opponent out of the end zone in consecutive games. Amazingly, the great 2018 defense didn't even accomplish that feat! It was great to see Tyler Davis back after missing last week's game due to COVID. On the back end, Lannden Zanders is out for the season, and Nolan Turner should be returning next week, but the secondary was tremendous again. Safety RJ Mickens, who had a nice interception in the spring game, came up with his first career INT.  And even when the backups came in, there was very little drop off. LB Keith Maguire came up with a big PBU in the end zone to keep the Bulldogs out of the end zone. I was a little surprised that they only came up with one sack for the second straight game, but it's pretty cool that it was recorded by true freshman linebacker Jeremiah Trotter, who was one of the Tigers' biggest recruits of the 2021 class. 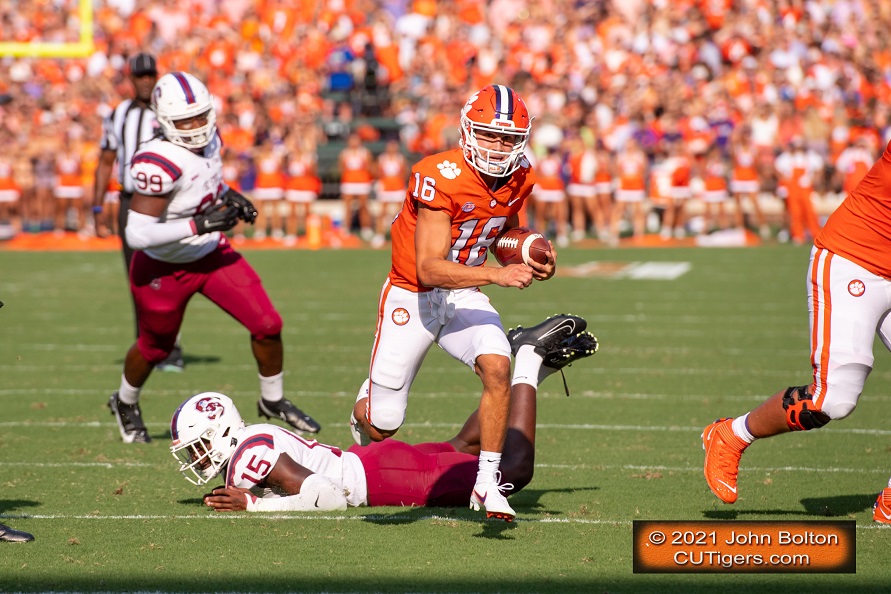 Special teams did not disappoint either. Potter missed his only field goal attempt from 58 yards just before halftime, but Will Taylor had a 51-yard punt return, and Will Shipley had a 28-yard kickoff return. The two freshman Will's were electrifying on Saturday! Dabo also inserted Taylor at quarterback in the 1st quarter, and it's plain to see that he will be a regular fixture on offense as well as the return game. Taylor had a nice touchdown run called back for a block in the back, but he finished with 5 runs for 20 yards. Will Shipley rushed for 80 yards and his first 2 career touchdowns. 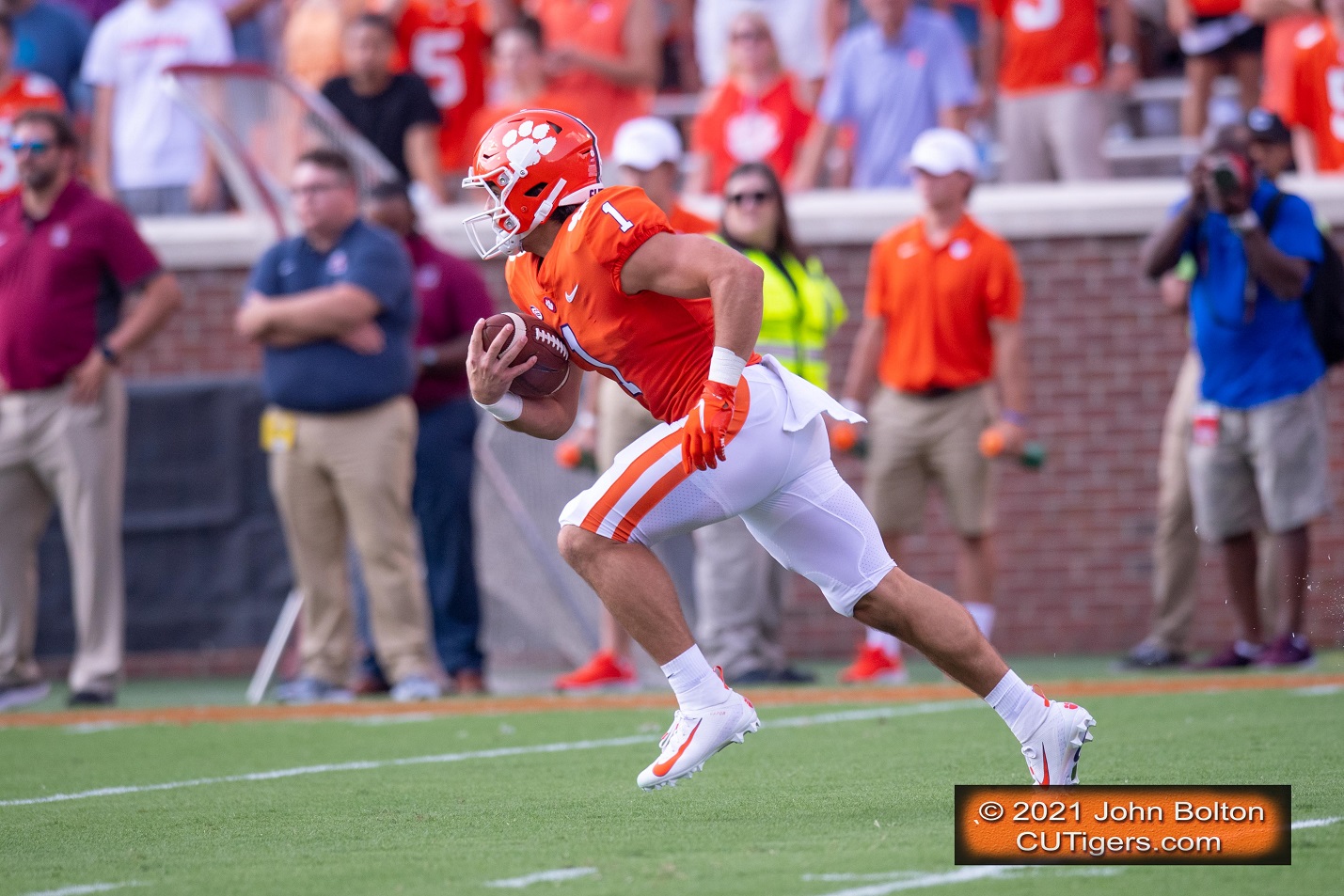 One of the highlights of the day, of course, was the tribute to CJ Spiller at halftime. He received a plague from the National Football Foundation, which will induct him into the College Football Hall of Fame in December in Las Vegas, and I'll be there to bring you coverage of it. CJ received a wonderful standing ovation from the Death Valley crowd 15 years after he played his first game on Frank Howard Field. It brought back a lot of memories! For video of the halftime tribute, click HERE. For the story we published on CJ a few days ago, click HERE. It was also the 20th anniversary of 9/11, of course, and there were several moving moments throughout the game in remembrance. Go to the game thread in The Valley forum or click the first link above to see the fly-by before kickoff! 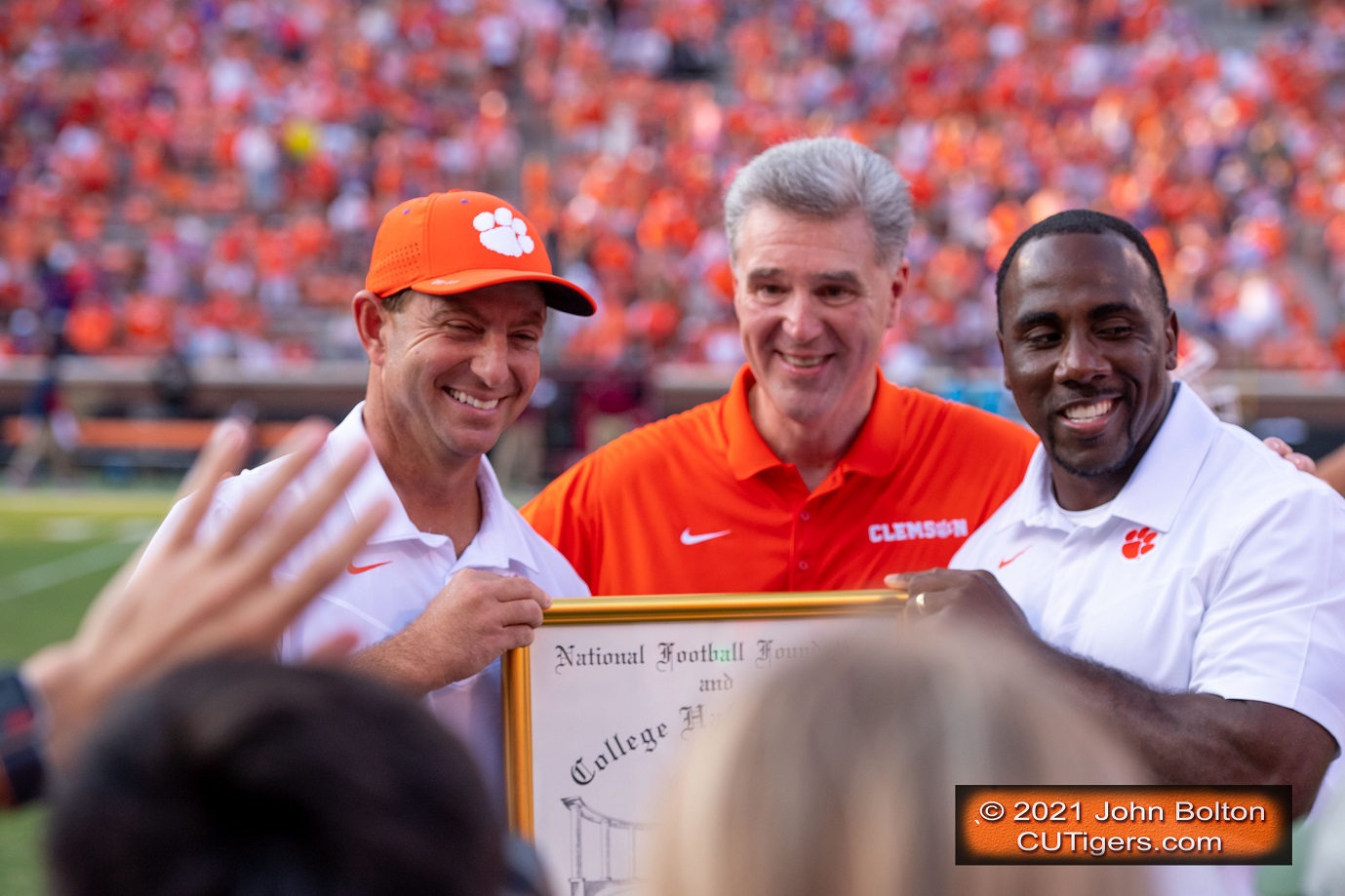 I'll have more in a bit. In the meantime, Dabo's post-game press conference, coach/player interviews and game notes are below!