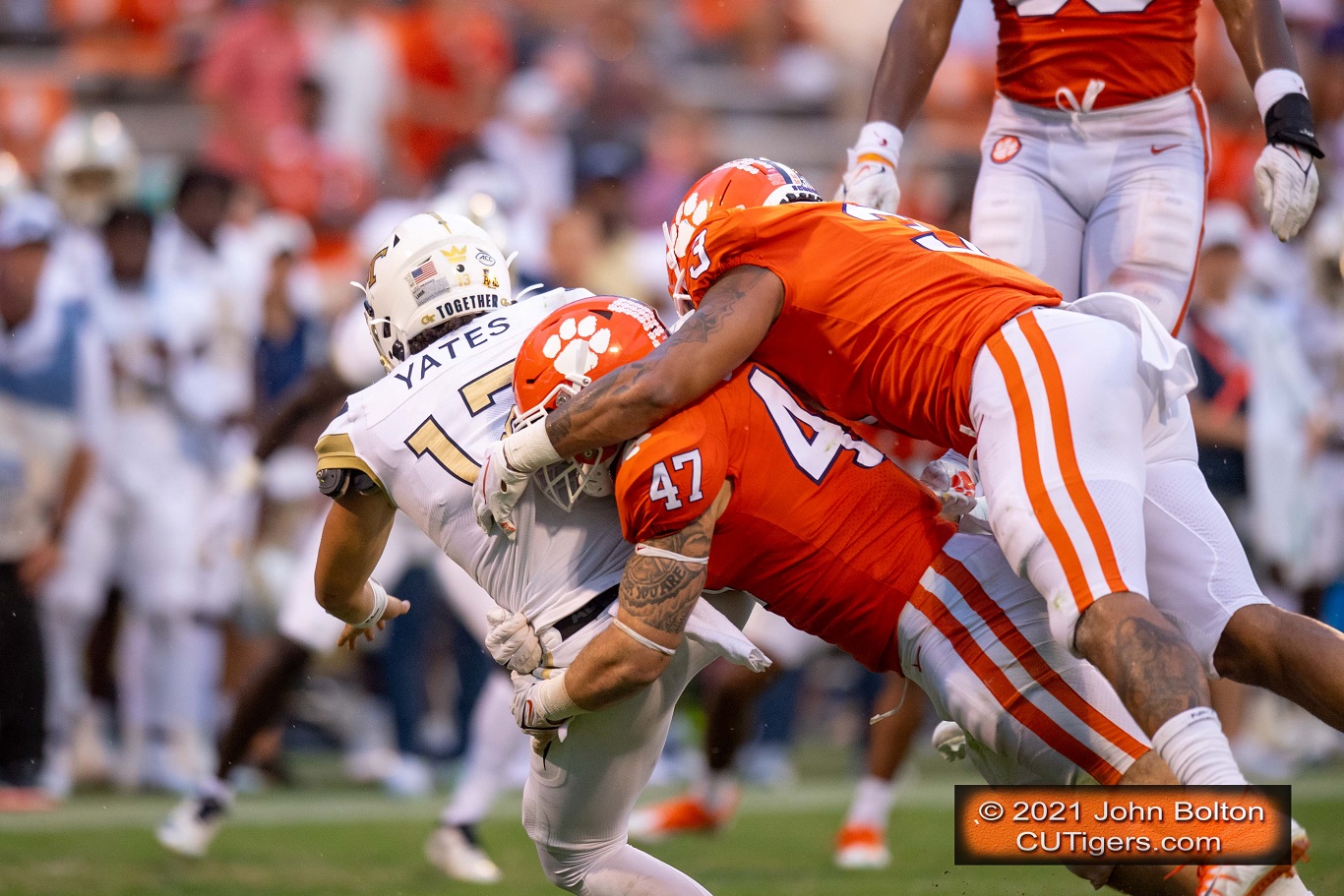 CLEMSON, SC - What a game! It was a weird day in Death Valley, beginning with the sudden downpour just before kickoff with the sun shining. When the two-hour lightning delay (during which I didn't see a drop of rain or hear one crack of thunder) hit with 32 seconds left in the first half, you knew it was going to be one of those games where crazy things happen, and you just hope the Tigers can overcome and survive it. They did just that, hanging on for the 14-8 win to extend the nation's longest active home win streak to 30 games. It was a sellout crowd and loud in the first half, but after the delay, only about 25,000 fans returned, so it almost felt like 2020 all over again. The fans who returned did their best to make their presence felt, but it felt like a big break for Tech, especially with a 3rd and 2 on the Tigers' 17 yard line with 32 seconds left in the first half to resume play. However, the defense was still able to get the stop and hold Tech to just a field goal, giving the Tigers a 7-3 lead at the half.
For the second time in three games, the offense struggled to score, but the defense was absolutely remarkable once again. For the third consecutive game, the Tigers did not allow a touchdown and gave up just 6 points. They are averaging 4 points allowed per game a quarter through the regular season! The defense came up with stop after stop after stop when they had to have it, including a goal-line stand with under 30 seconds left and another stop after the offense committed a safety. It all fittingly culminated with super senior Skalski playing with his hair on fire and making three season-saving tackles on the goal-line stand. He showed his speed and relentlessness in tackling the speedy receiver McGowan on the sideline for no gain at the 3-yard line. Then he was in on a tackle with Tyler Davis to stop Tech's run at the 2-yard line. Finally, on 4th and goal from the 2-yard line, Skalski single-handedly blew up the run at the line of scrimmage to force the turnover on downs and seemingly end the game with 15 seconds left. Of course, on this bizarre day, the game wouldn't end there. Will Shipley fumbled on the goal line, and it was ruled that he recovered it in the end zone, forcing a safety and giving Tech 2 points with the ball. It looked to me on replay that he was across the goal line plane, but the officials said otherwise. On one hand, the Tigers were fortunate that Tech didn't recover for a touchdown, which would allow them to tie with a 2-point conversion. On the other hand, the safety made it 14-8 and meant that Tech would have a chance to win the game, perhaps on a Hail Mary! However, the defense once again answered the bell and made two final plays to end the game and preserve the Tigers' playoff hopes.
Dabo's press conference, post-game interviews, notes and highlights are below. I'll have more in a bit!