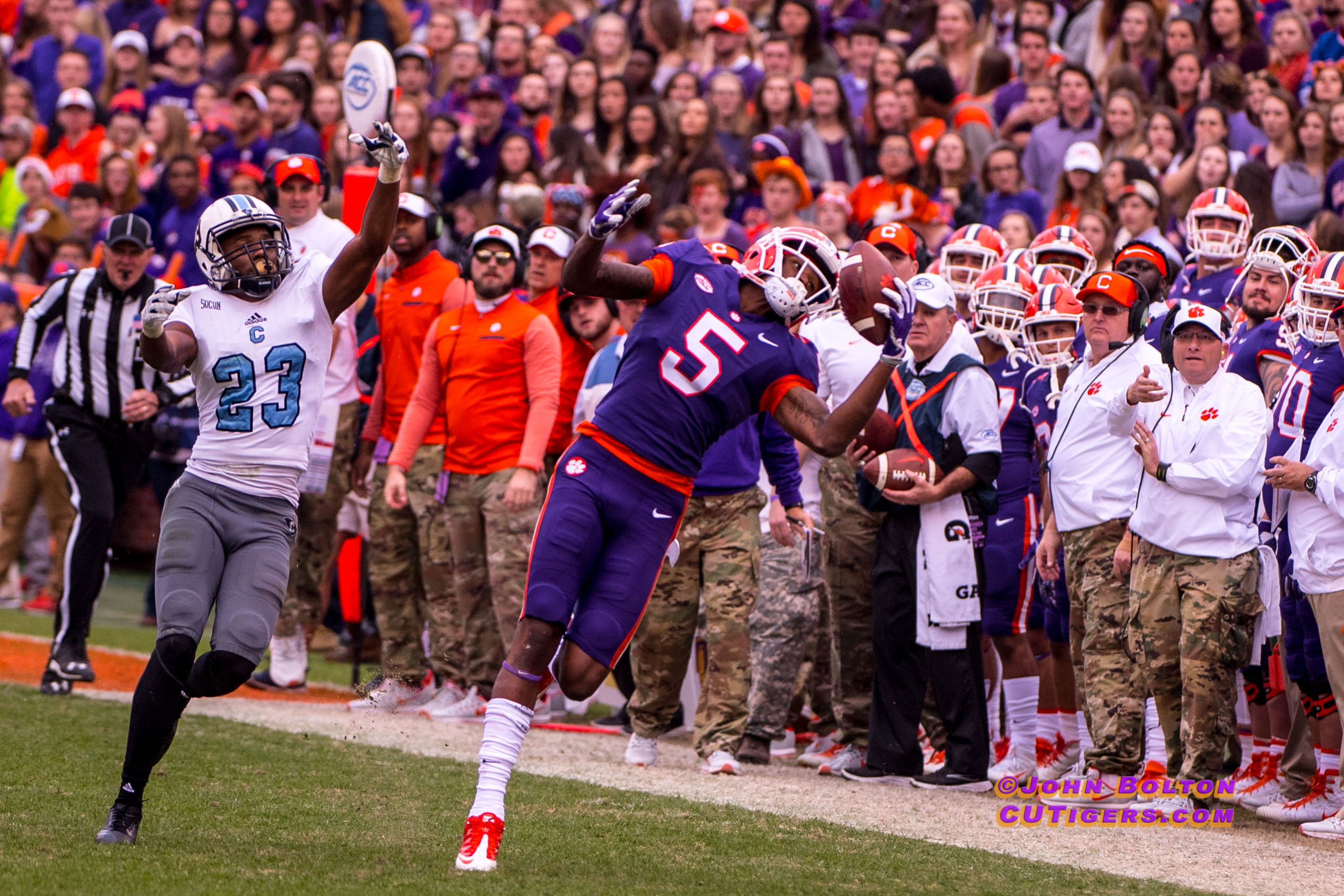 CLEMSON, S.C. – The No. 2 Clemson football team finished its 2017 slate of home games undefeated on Saturday, defeating The Citadel 61-3 on Saturday in Death Valley. With the win, Clemson improves to 10-1 overall, while The Citadel moves to 5-6.

The Clemson defense held The Citadel to just 216 yards compared to the Tigers’ 662. The Tiger offense was led by Travis Etienne and Tee Higgins, who accounted for four of Clemson’s touchdowns. Higgins amassed 178 yards on six catches, while Etienne rushed for 62 yards on eight carries. Kelly Bryant was 17-22 for 230 yards and three touchdowns. 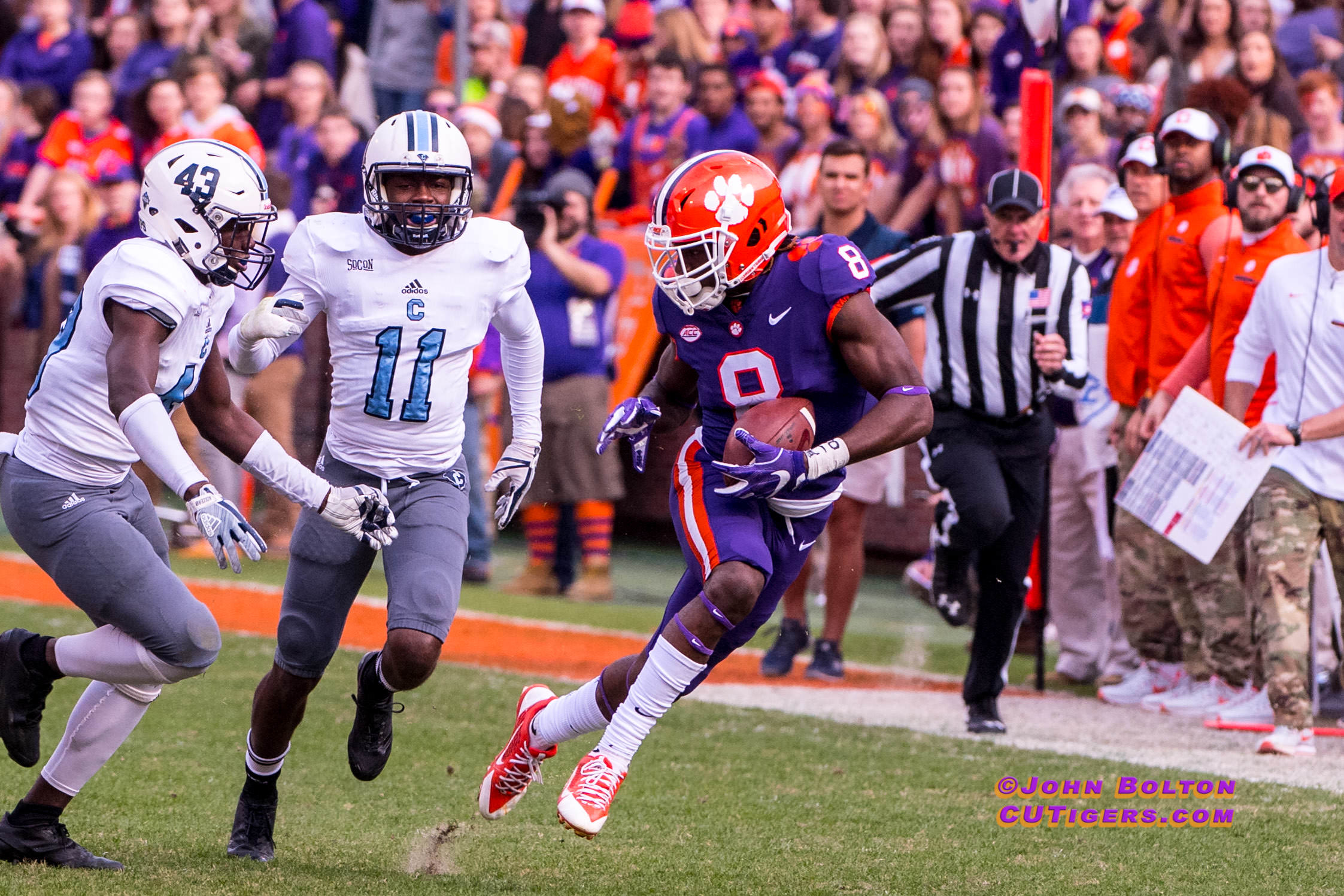 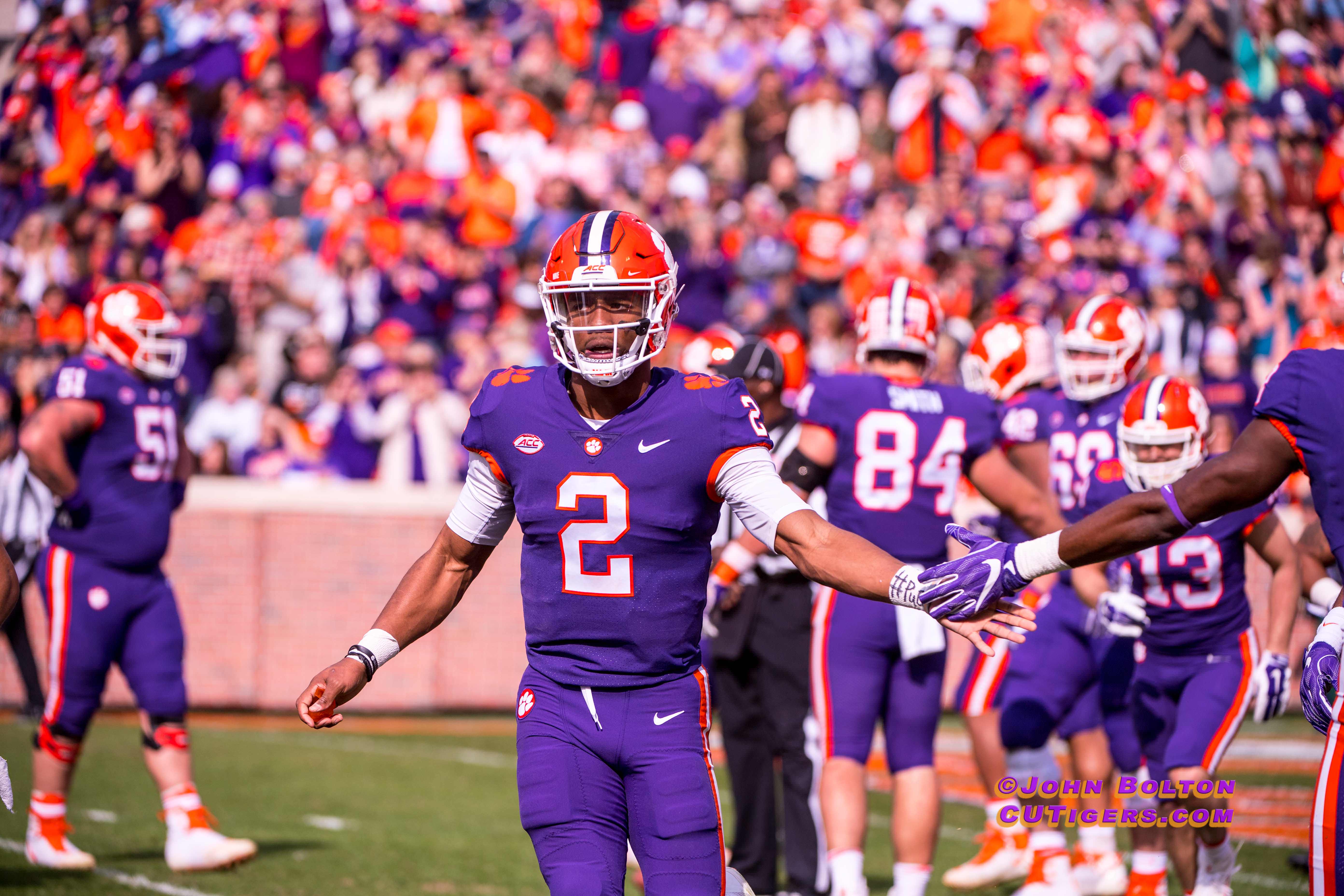 Bryant connected with Deon Cain for a 53-yard touchdown to open the scoring with just over eight minutes left in the first quarter. A Trayvon Mullen acrobatic interception at midfield on The Citadel’s next drive set up Clemson’s second touchdown of the day, an Etienne six-yard rush. The Tigers took a 21-0 lead with less than a minute remaining in the first quarter when Bryant found Hunter Renfrow for a 12-yard score. 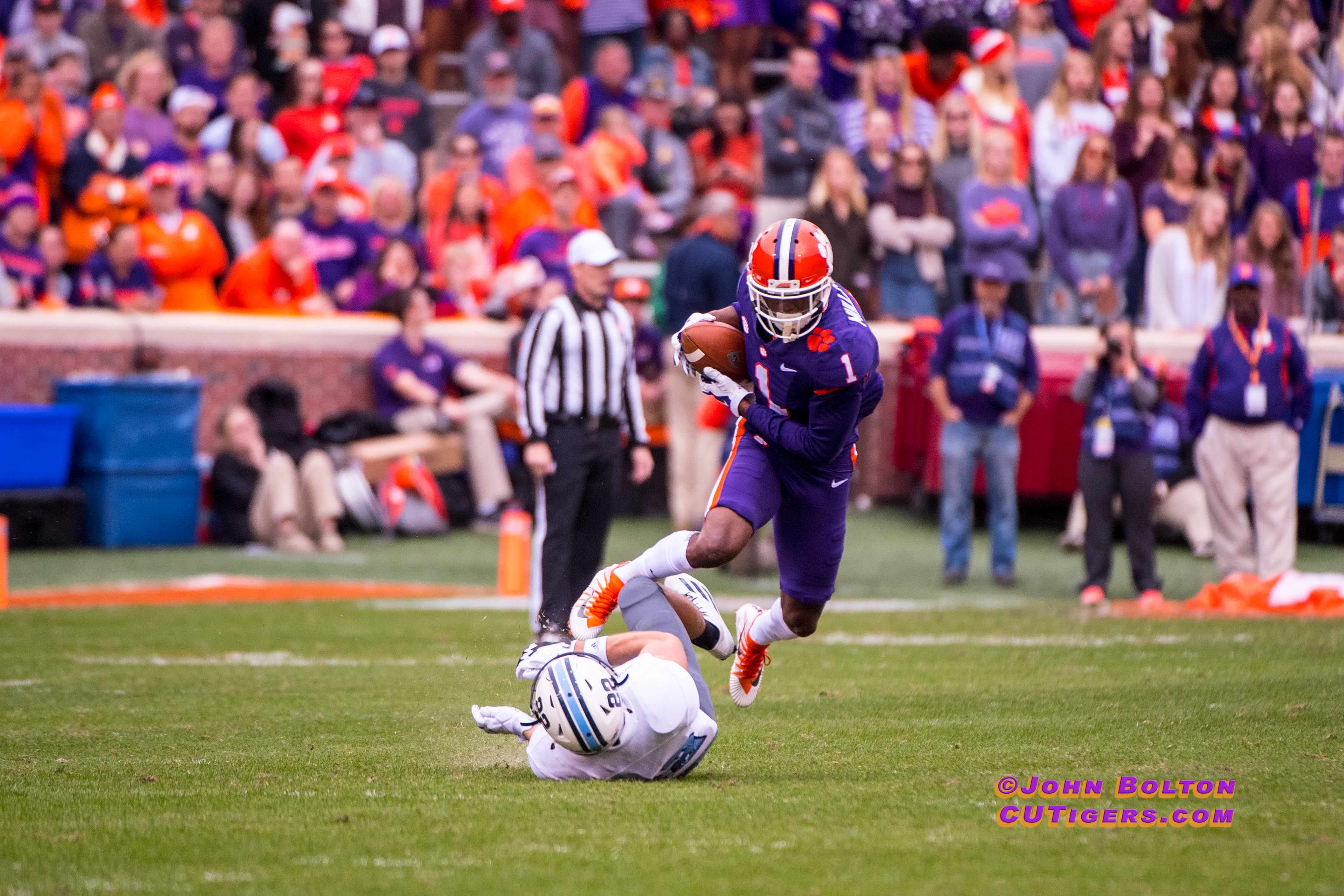 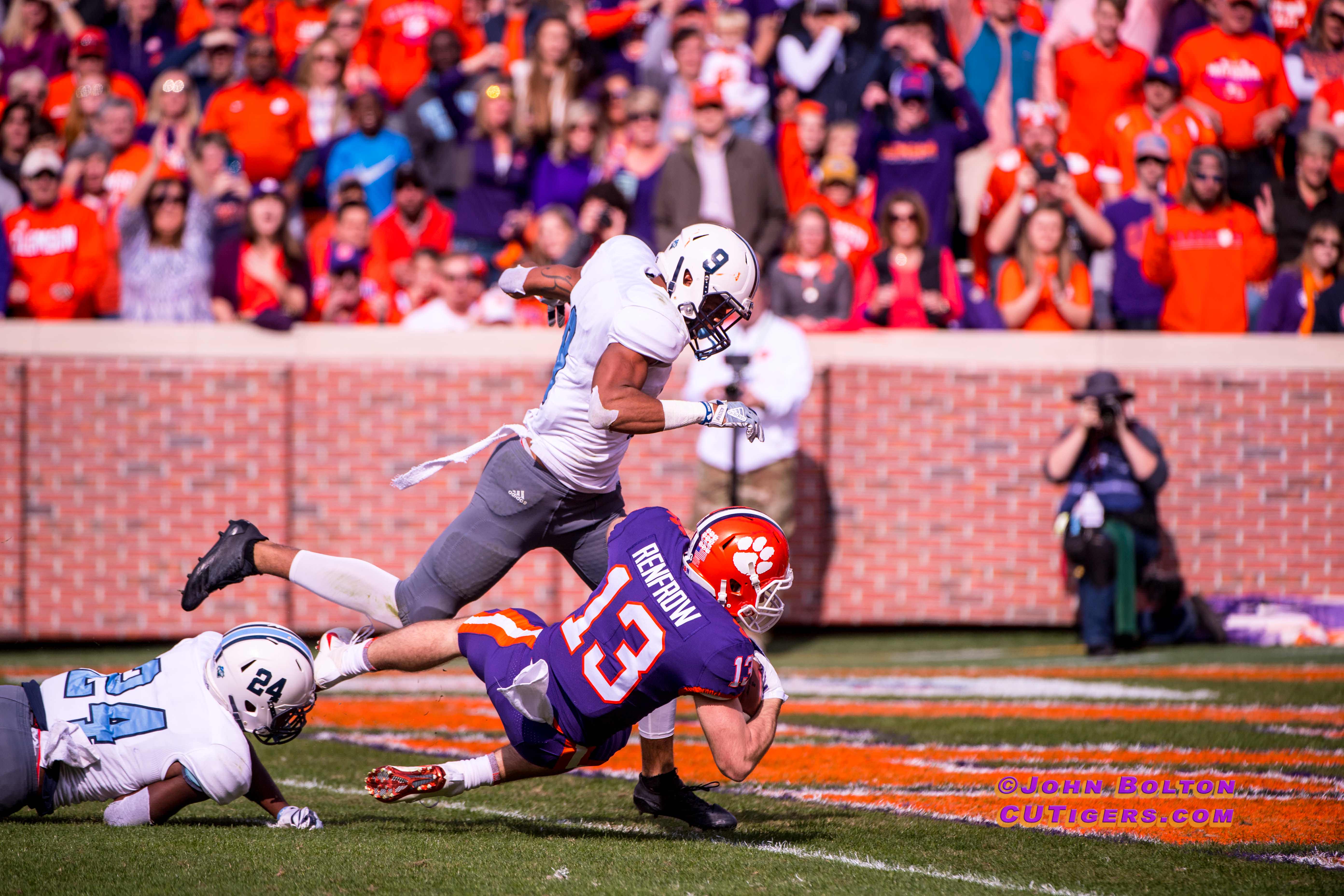 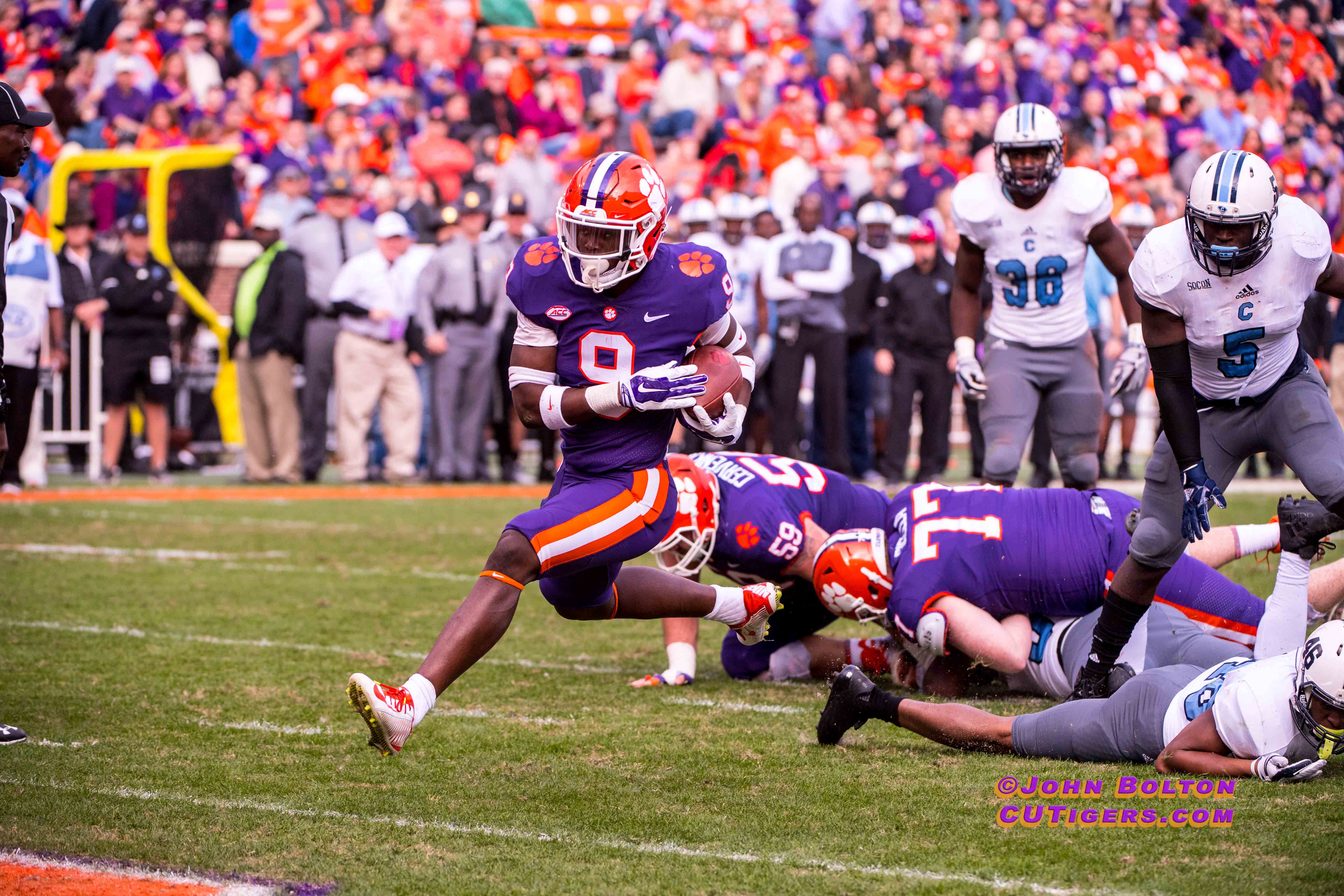 T.J. Chase hauled in the Tigers’ first touchdown of the second quarter, a 13-yard pass from Bryant with 12 minutes remaining in the half. Six minutes later, an Alex Spence 26-yard field goal brought the score to 31-0, and Higgins caught a 32-yard touchdown pass from Zerrick Cooper through traffic as time was expiring to bring the halftime score to 38-0. 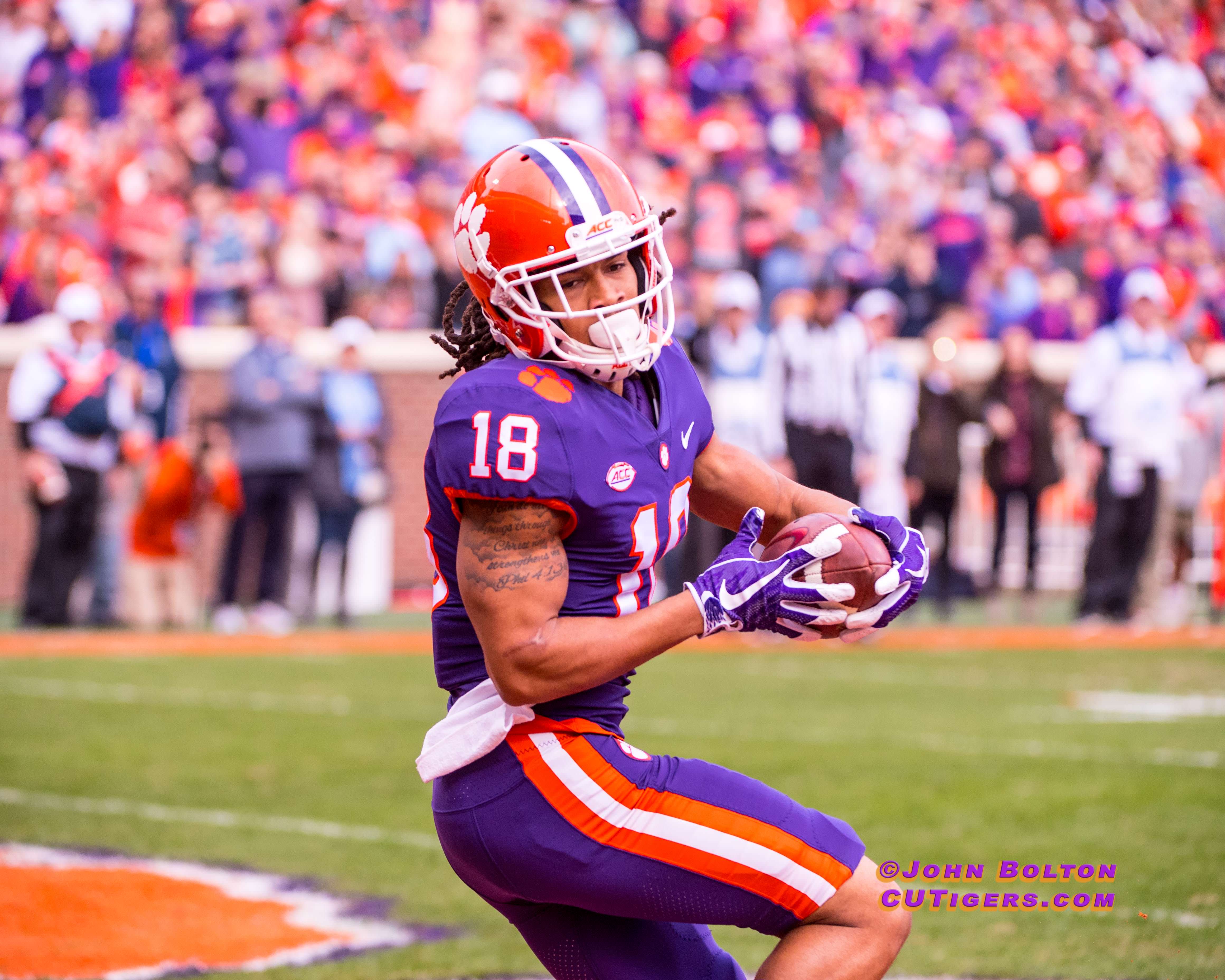 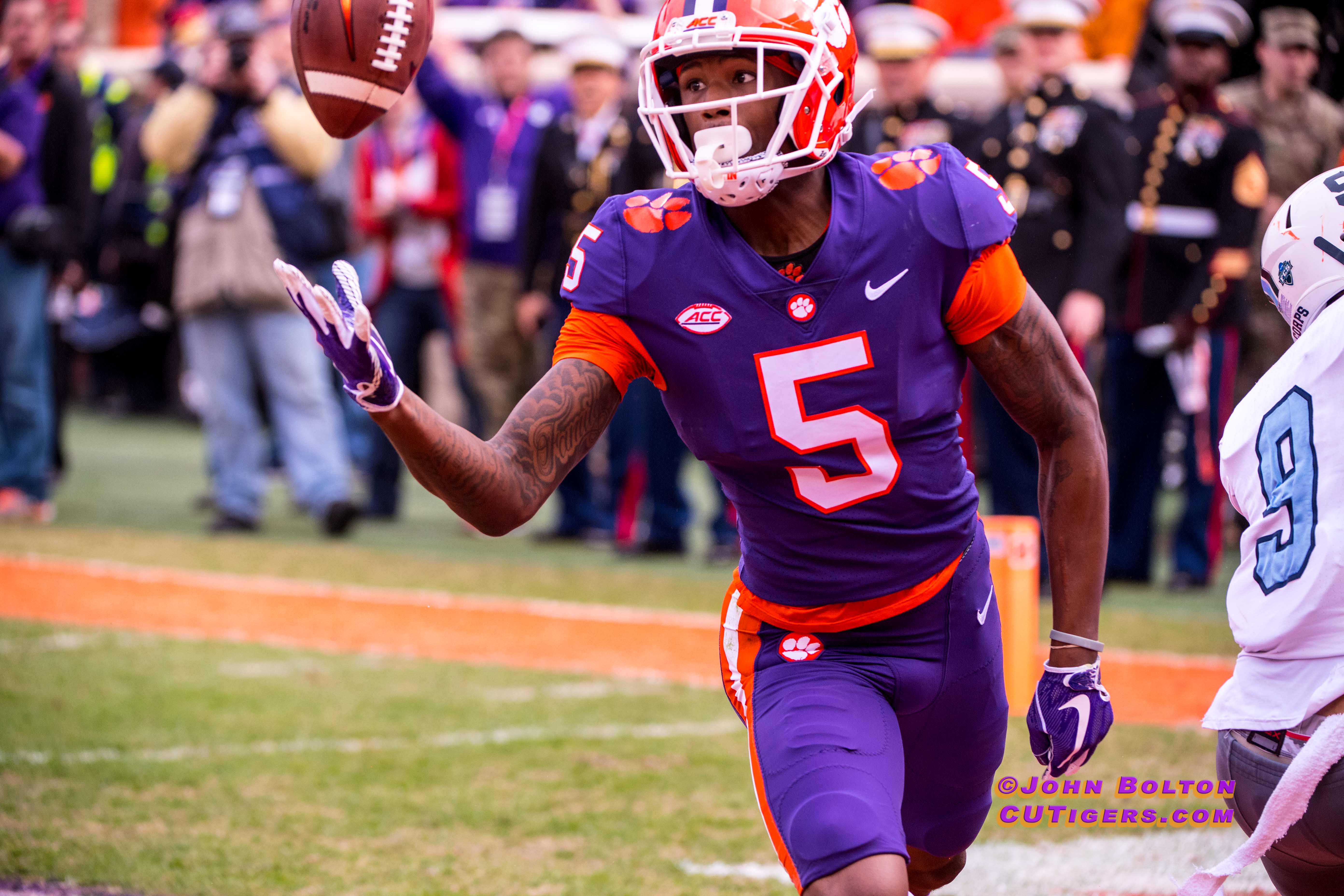 Tavien Feaster gave Clemson a 45-point advantage on the very first play of the second half, rushing 61 yards from scrimmage for a score. Etienne then rushed seven yards for his second score of the day, and Hunter Johnson found Higgins for a 78-yard touchdown to complete the third quarter scoring with Clemson leading 58-0. 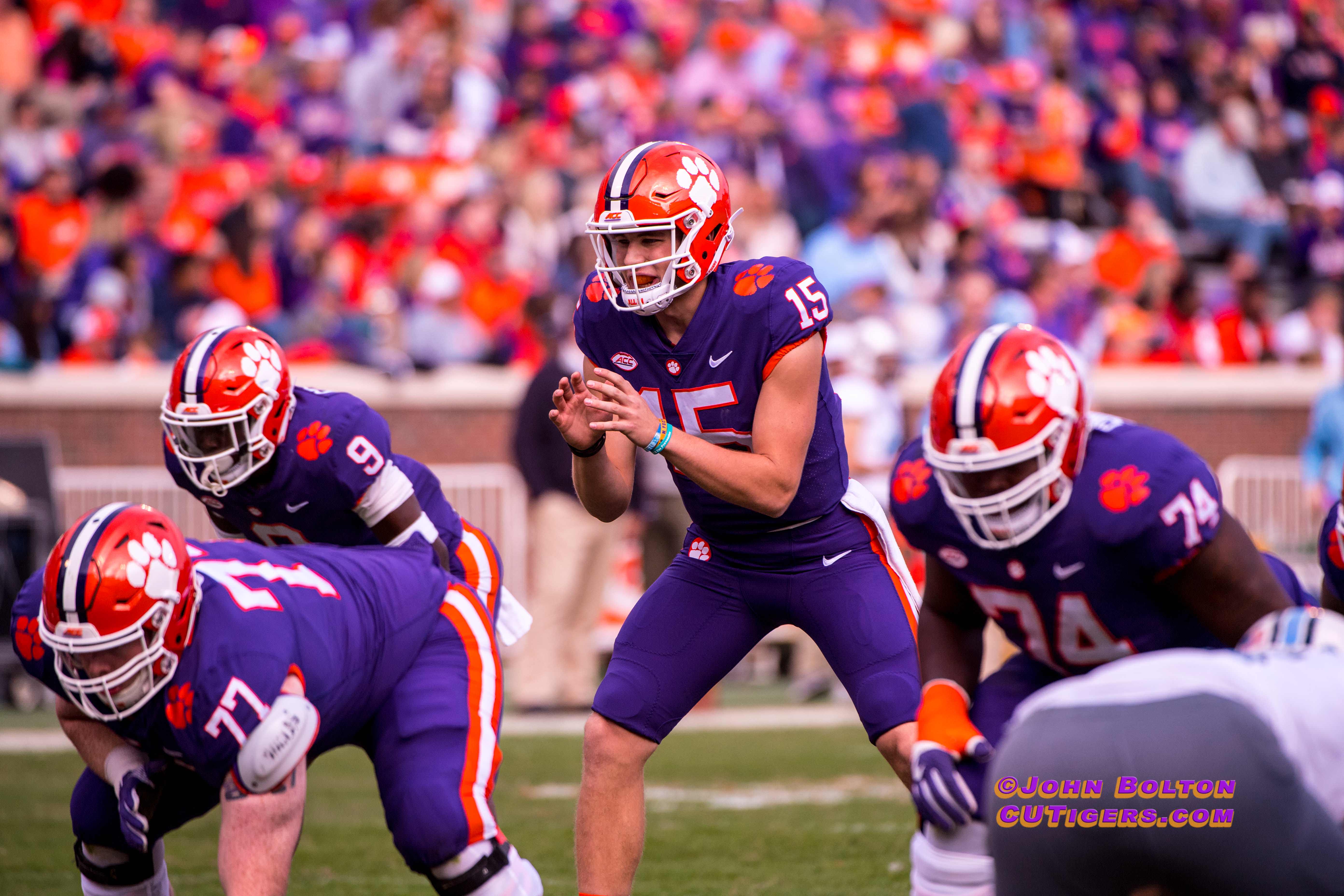 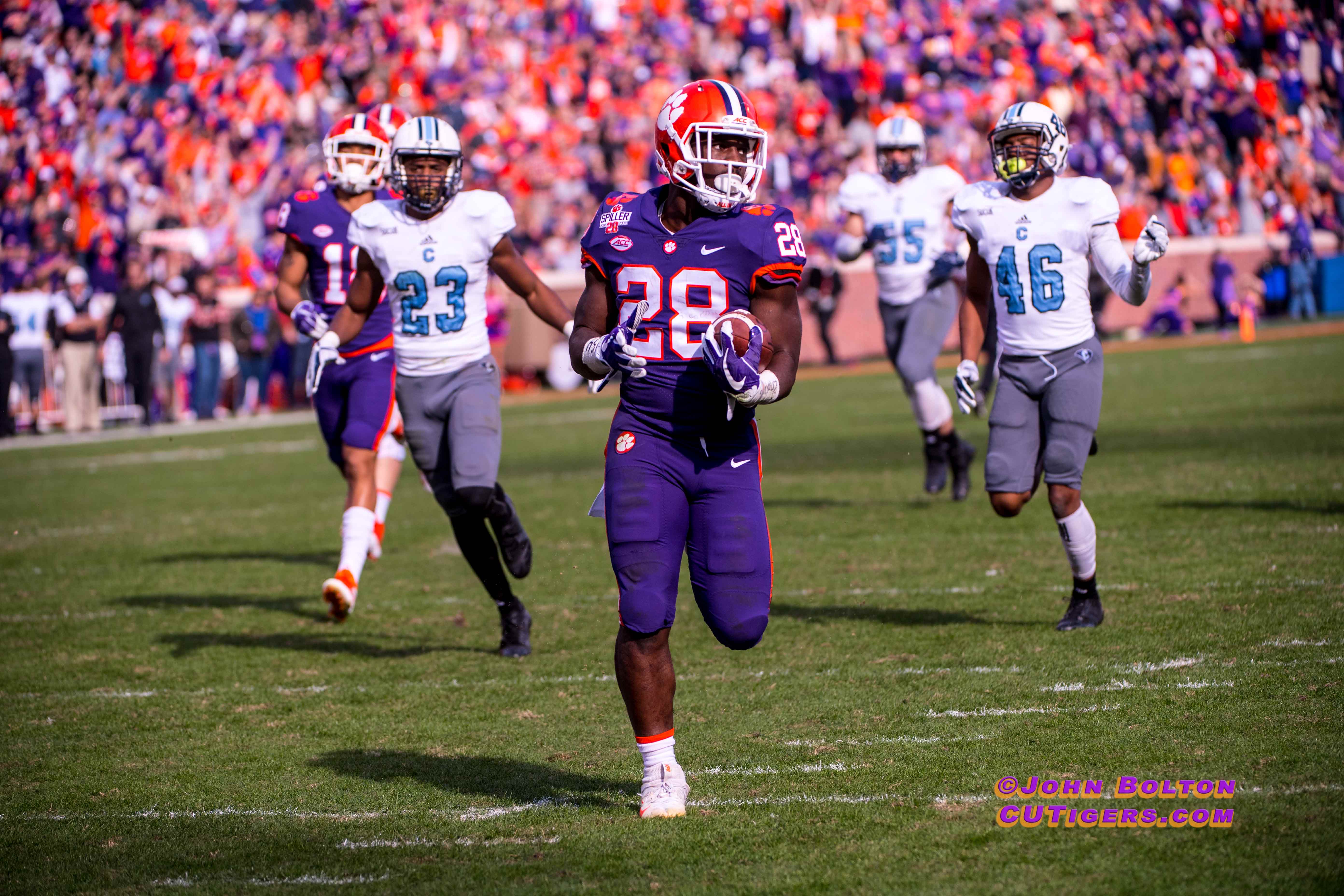 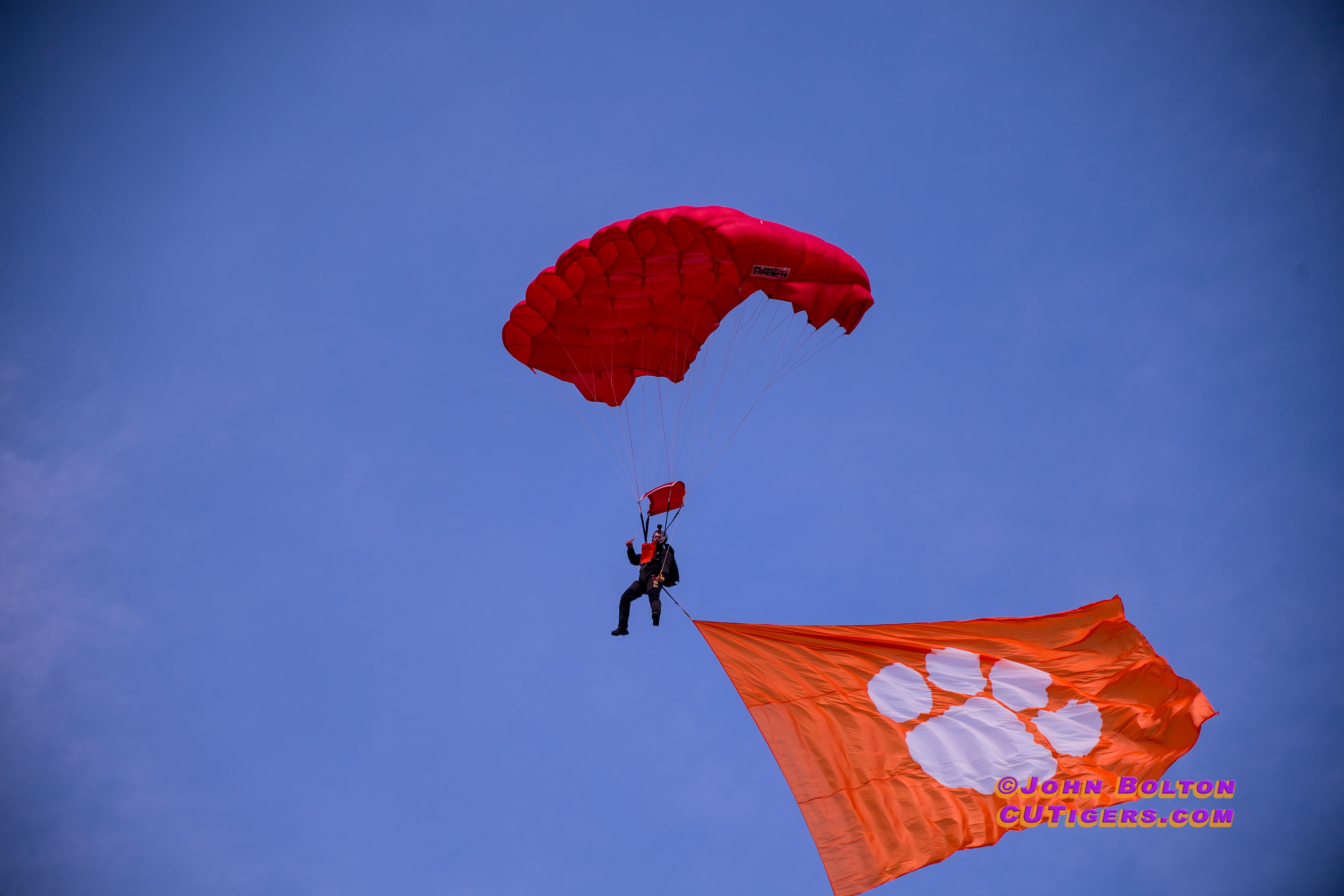 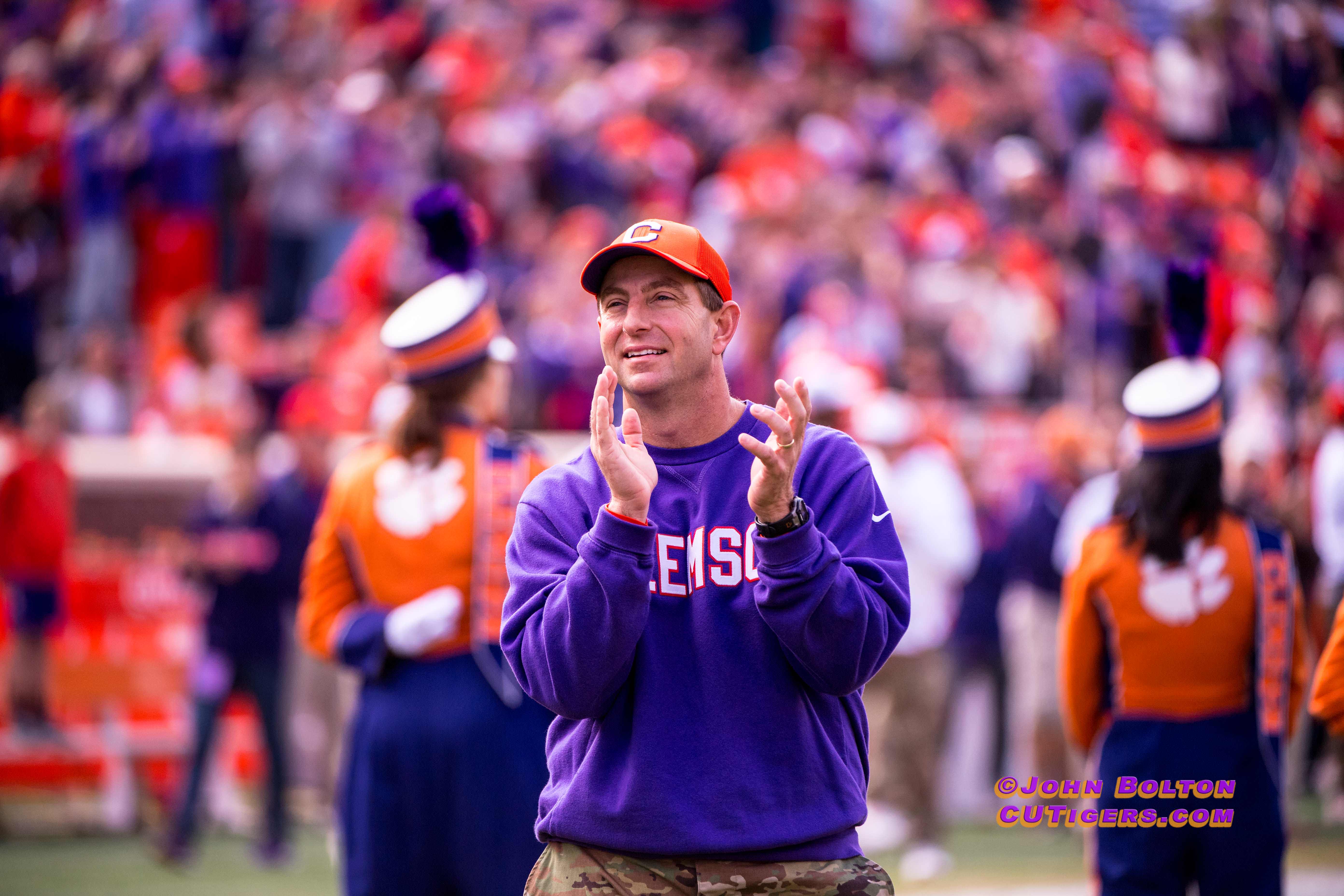 The Tigers go on the road to face their rival South Carolina next Saturday. Kickoff is scheduled for 7:30 p.m. in Williams-Brice Stadium.

On the Senior Day victory:“Congratulations to the seniors. Senior Day is always an emotional game. Today, we showed some maturity as a team…to get control of the game and get other guys some opportunities and hold The Citadel to three points was awesome.”

On the well-rounded performance of his team:“We played so many guys. We also had three quarterbacks throw for over 100 yards, and I don’t know if that’s ever happened before. It was great to see Deon Cain get back on track. How about Tee Higgins? What a performance he had. Also, Travis Etienne broke C.J. Spiller’s freshman touchdown record. James Skalski got first start and played well. Again, so many guys made critical plays at critical times. This was just a fun day to see these guys have a great time playing well and seeing other guy play well and get excited about that, too.”

On the success of the senior class:“We’ve now gotten at least 10 wins seven years in a row. The class of 2011 got it started, and it’s carried forward to this year’s senior class. It’s really hard to do that, and for them to go 27-1 at home is mind-boggling. I’m just really proud of the standard that these guys have bought into during their time here.”

HUNTER RENFROW, Wide ReceiverOn execution of the offense:“We wanted to get some rhythm in the passing game. We got Tee [Higgins], Deon [Cain] and Ray Ray [McCloud] all going on deep balls today, and that’s what we needed. We’re excited about finishing strong.”

On South Carolina next week:“They’re definitely talented...they are good enough to beat us. They’re a good team, and that’s something that growing up in South Carolina, I’ve always looked forward to. They had our numbers when I was in high school, and hearing a lot of smack talk from Carolina fans certainly keeps me motivated.”

On the South Carolina game his freshman year:“I remember it being a lot closer than maybe it should have been. It was close...it came down to an onside kick, and so for the guys that went down there and played, that is definitely in our minds, and we’re ready to go take care of business.”

ZERRICK COOPER, QuarterbackOn his personal performance:“I found my rhythm, and I’ve been working on all aspects of my game. It’s nice to go out and prove all of the hard work you put in is doing something.”

On things he’s improved on since getting the Syracuse experience:“I think I’ve tried to improve my confidence and self esteem the most, along with my moves. I can always work on some things. Anything I work on, I put my best effort into it.”

On the fumble-turned-touchdown pass:“I knew I had one-on-one with Tee Higgins...I knew he was going all the way. There was a little bad fall, but in that moment, it was my redeeming shot. I looked downfield, and let it fly, and he executed it perfectly.”

JUSTIN FOSTER, Defensive EndOn confidence going forward from today:“Confidence-wise, I think the biggest thing is being confident in myself being out there, and getting out there and being able to play 15-20 snaps gives me confidence that next time I’ll go out there.”

On the transition of the fall and getting thrown into the action:"Being throw in is rough...just learning the system and everything. You just have to take it day by day. That’s what I did. I learned the defense and everything, and it’s just gotten better each day.”

The hardest part about the transition from high school to college:“In high school, I didn’t spend as much time in football. [Here], you’re with football 24/7... it’s your life. I thought it’s just the hardest thing...it’s your life.”

MARCUS EDMOND, CornerbackOn being back on the field for the first time since September 7th:“It felt great to get back on the field, playing with my brothers again...and the last time being in the Valley too.”

On his rust level on the field:“I feel like I knocked all the rust off at practice.”

On being at the top of the Hill for the final time:“I was just thinking about how fast it went...five years went by so fast. The only years I remember are my redshirt year and last year and this year. Every other year was like a blur.”

THE CITADEL HEAD COACH BRENT THOMPSONOn moving the ball on offense:“It was all we could do to try to get first downs and move the ball on each drive. I was happy with that last drive we had. We threw the ball real well and got in position to at least put three points on the board.”

On the overall season they had:“It has definitely been an up and down season for us. There is no doubt about it. The games that we lost were to some pretty good football teams...five 7-1 teams, and these guys right here [Clemson]. So I don’t think it is as bad as we made it out out be. We definitely had opportunities to win...it’s just our expectations were a lot higher. We have our work cut out for us. We just have to find a couple of more guys to fill in some of the spots that we missed.”