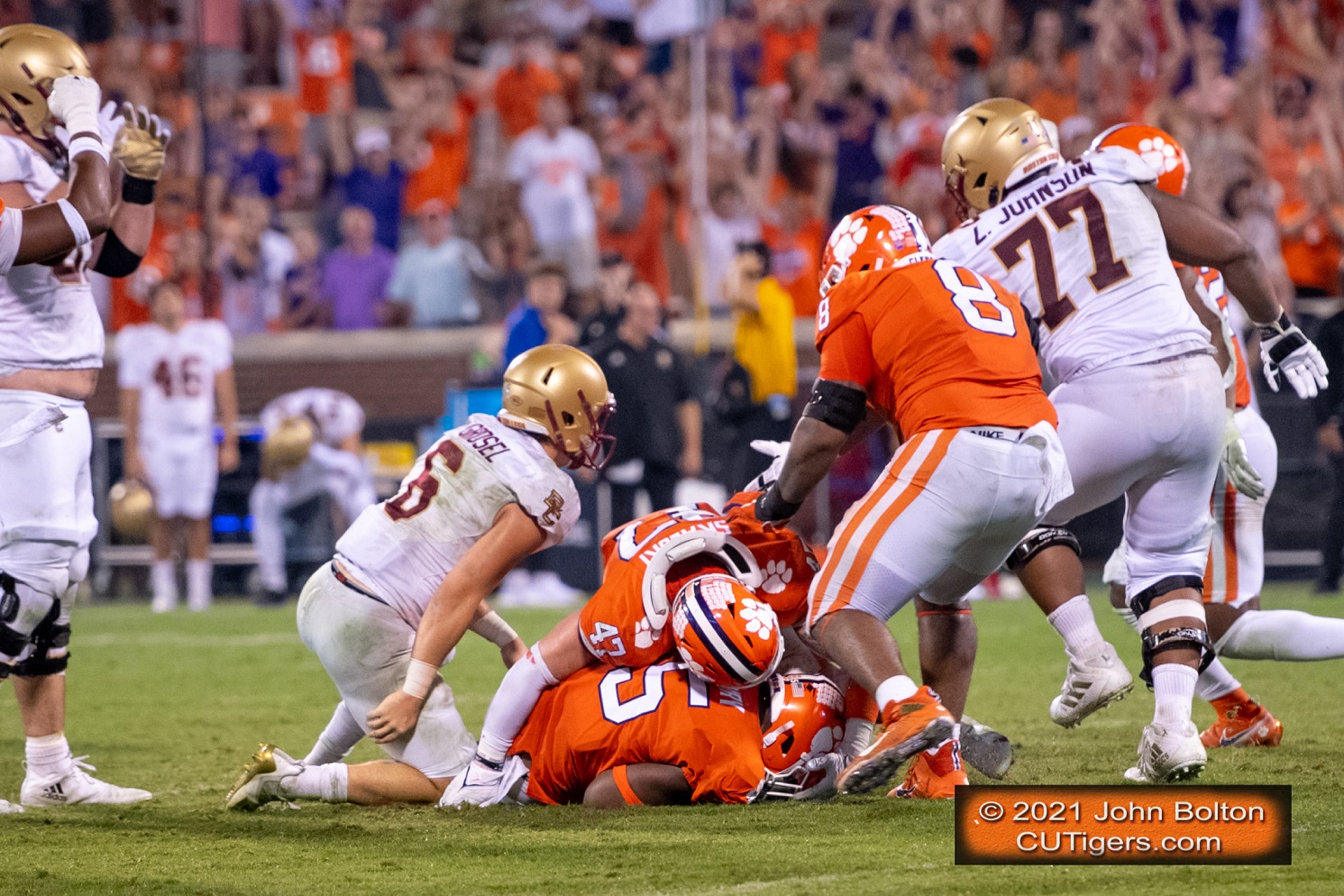 
NO.19 CLEMSON WINS ON THE BACK OF ITS DEFENSE AGAIN, BEATING BC 19-13 ON HOMECOMING

Photo by John Bolton
CLEMSON, SC - Another thriller! Four of the Tigers' first five games have been of the one-score variety, but the defense was able to save the day once again and extend the nation's longest active home win streak to 31 games with a 19-13 win over Boston College. The Tigers are 2-2 in one-score games this season, including last week's double-overtime loss at NC State, but they are 29-7 since 2011, which is by far the best percentage in the nation over the last 10 years. I can't even count the number of times that the defense has been put in that position, where it must prevent a touchdown or a two-point conversion to win the game. It seems like Venables and his guys almost always prevail against the odds. Last week was one of those rare occasions when they didn't, and I attribute that to the fact that they were on the field for 40 of the 60 minutes in regulation and had lost Skalski and Bresee. But over the years, from the Tech game a couple weeks ago to the BC game last year, the Ohio State Fiesta Bowl, the two-point conversion at UNC, the two-point conversions at A&M in 2018 and against Notre Dame in 2015, the 2016 Auburn, Louisville and NC State games and on and on, the defense has come up with the big game-winning stop it had to have.
This time, it was 3 turnovers, culminating with KJ Henry's fumble recovery, that did the trick against Boston College. Nolan Turner came up with his first interception of the season, and sophomore RJ Mickens recorded his second. It looked like the defense had possibly iced the game with a stop on 4th and 9 with 2 minutes left, but the offense went three-and-out to give the Eagles one more chance for the win. The Eagles moved the ball all the way to the Tigers' 10-yard line with a minute left when a pass deflected by Skalski sailed in and out of the hands of Tyler Venables in the end zone. the entire 80,000 in Death Valley thought the game had ended and then groaned as they realized the talented safety and younger son of Defensive Coordinator Brent Venables had dropped the game-winning interception. That meant BC would still have 3 more chances to go 10 yards for the game-winning score, but facing The Hill and the loudest end of Death Valley, a bad snap on the very next play sent QB Dennis Grosel scrambling backwards, fumbling the ball right into the waiting arms of defensive end KJ Henry and sending Death Valley into a frenzy! I've heard some loud roars in Memorial Stadium, going all the way back to the sack by Charles Bennett against Miami in 2005, and this was right up there with the loudest.
Xavier Thomas, who I reported back in August had transformed into the best version of himself, was the best player on the field according to Dabo after the game. XT was all over the field all night long. On the interior, Ruke Orhorhoro and Tre Williams stepped up in a big way with starting defensive tackles Bryan Bresee and Tyler Davis both out. Reuben Etinosa ("ET," as Dabo calls him) and freshman Payton Page also answered the call. They went against a rugged and experienced offensive line and held BC to just 1.4 yards per rush! 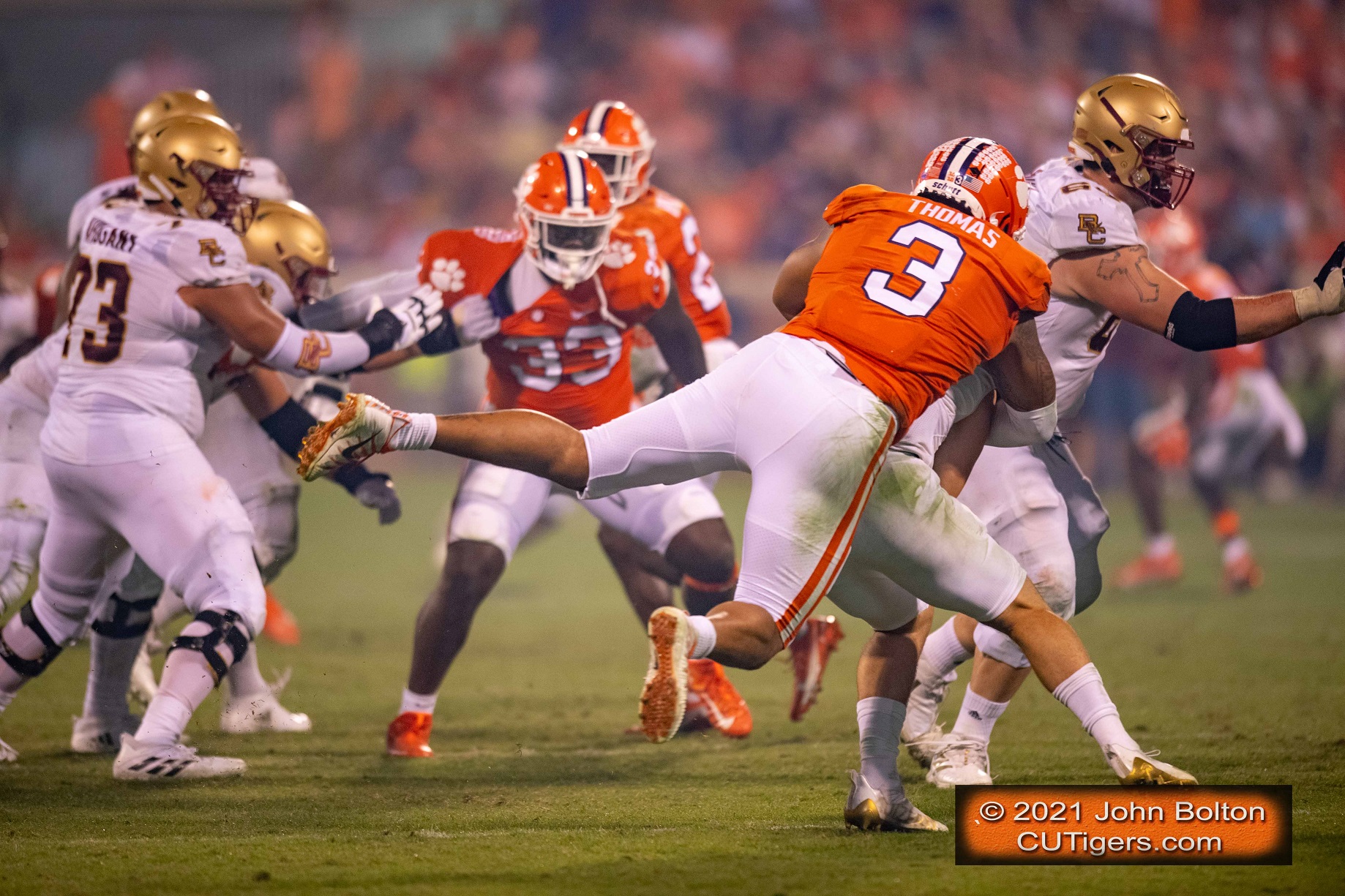 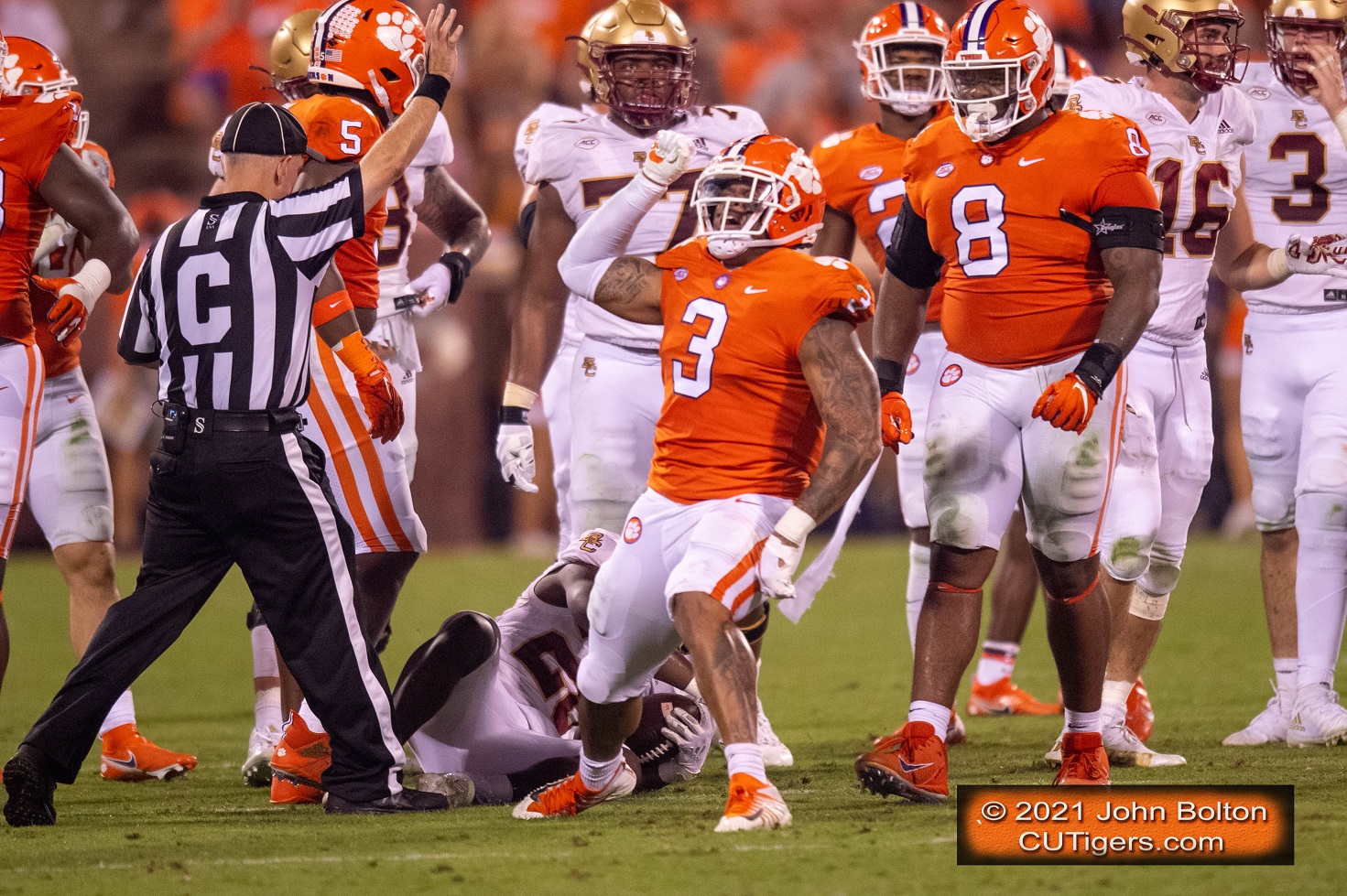 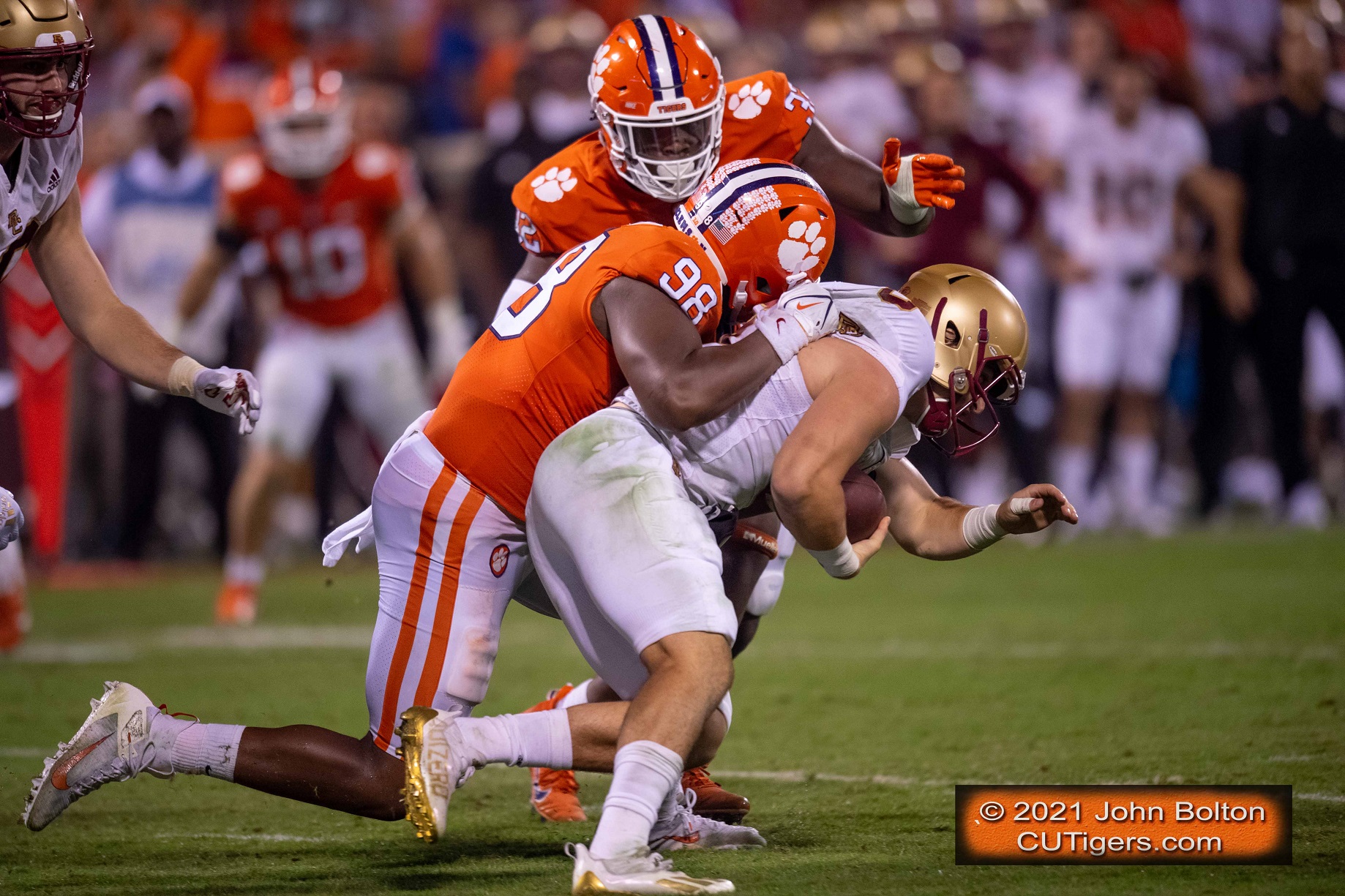 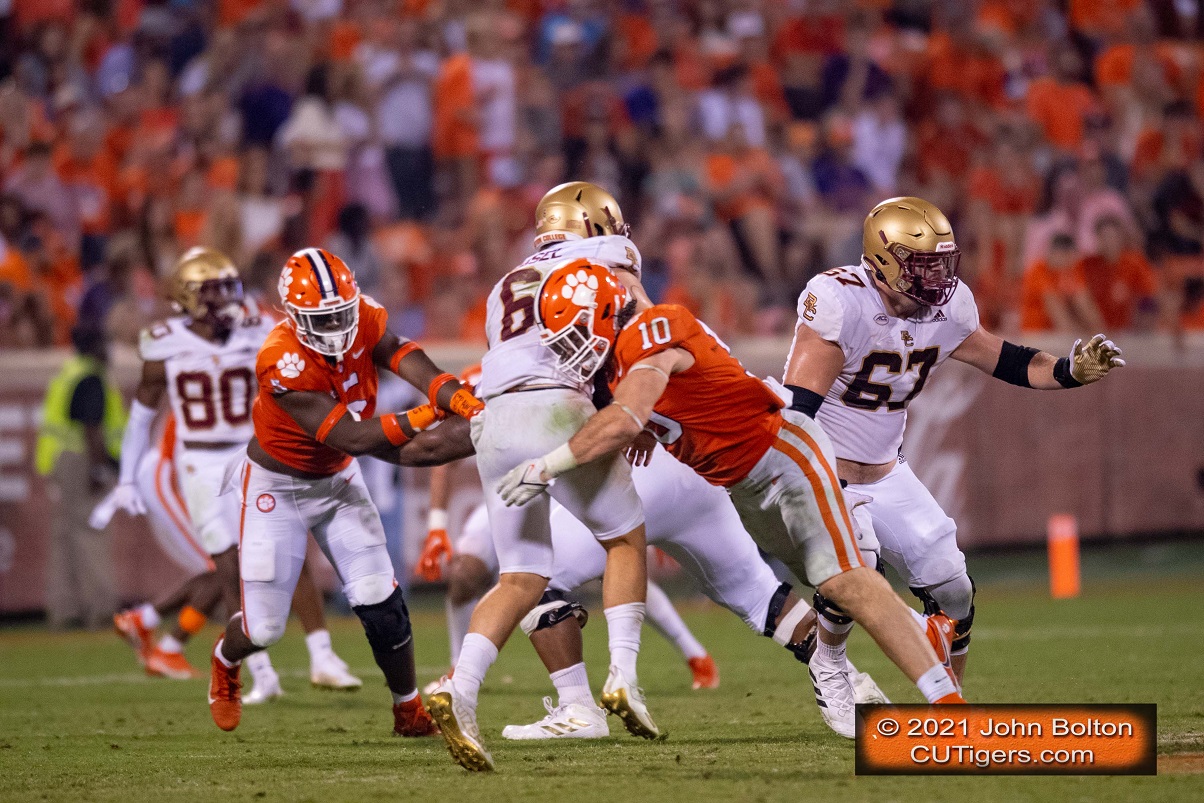 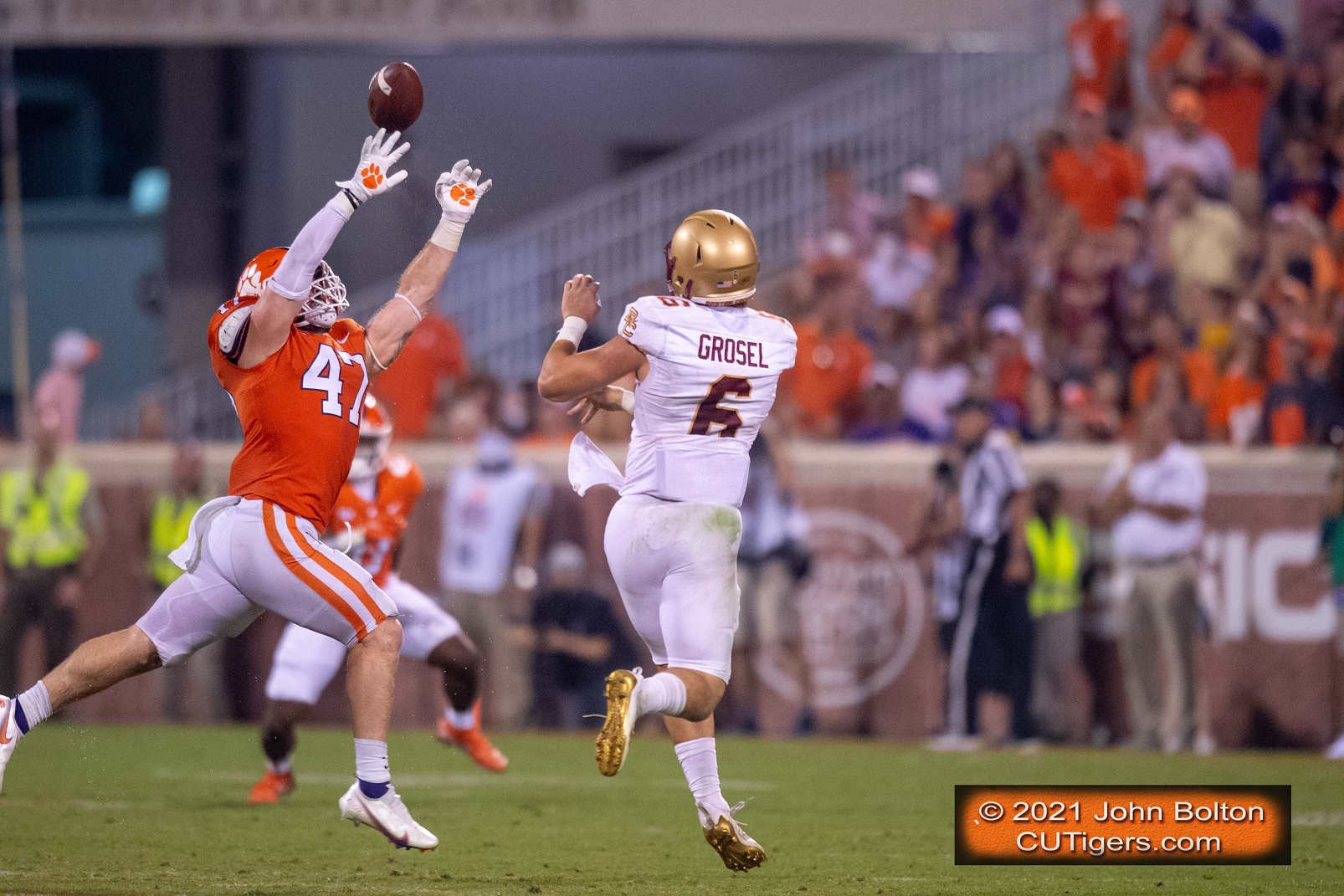 The offense, once again, left plenty to be desired, although the performances by sophomore Kobe Pace and freshman Phil Mafah were admirable with starter Will Shipley out. For the fourth straight Power Five game, it was a litany of mistakes, penalties and gaffs by the offense across the board. Many fans want to put it all on DJ and replace him, but he cannot catch his own perfectly thrown pass to Ngata on the goal line. If Ngata catches that, the Tigers lead by two scores, and BC doesn't even have a chance at the end. DJ has been far from great, but he has made as many good plays as bad, and simply replacing him is not the answer. The offense as a whole has to stop making mistakes and execute. 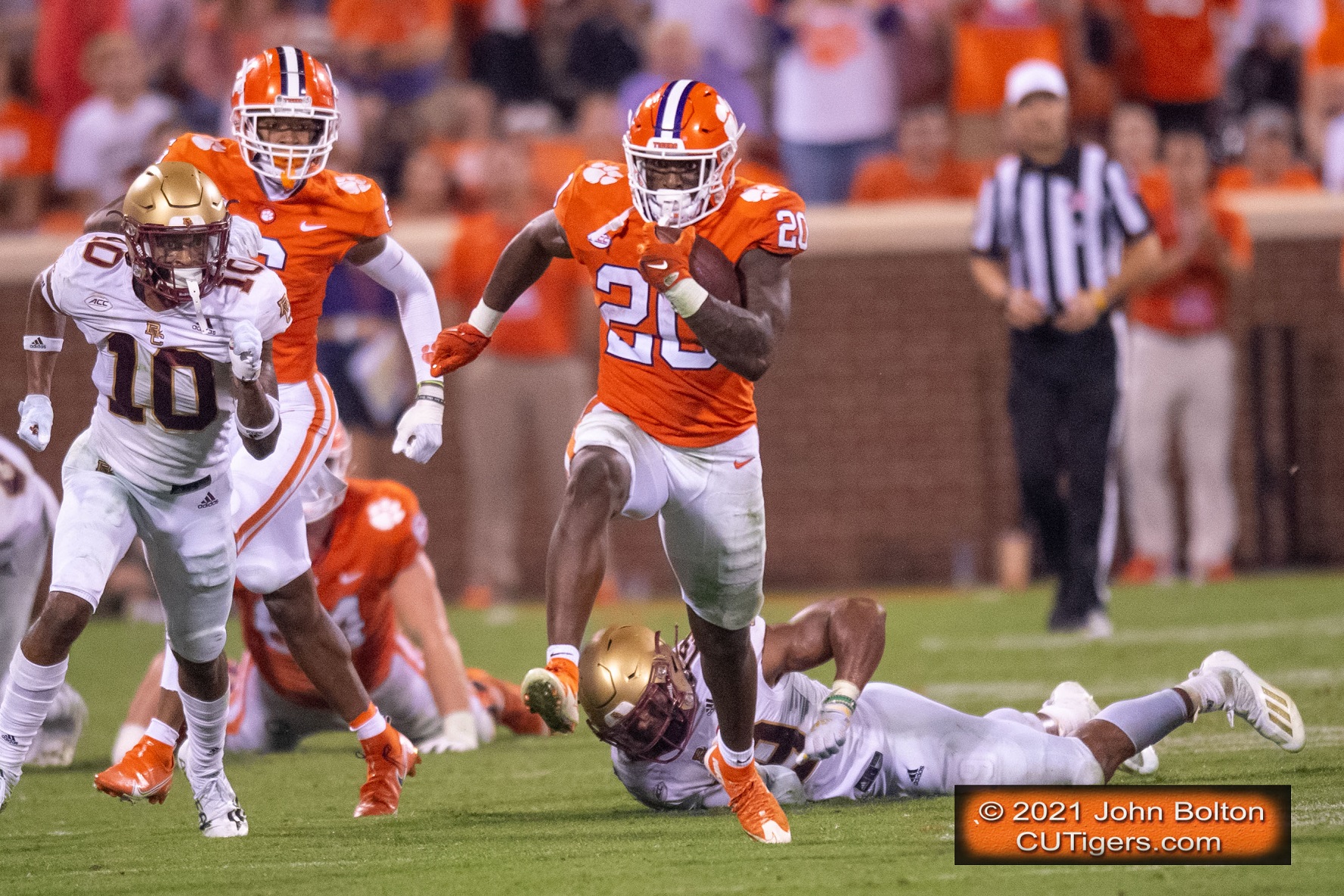 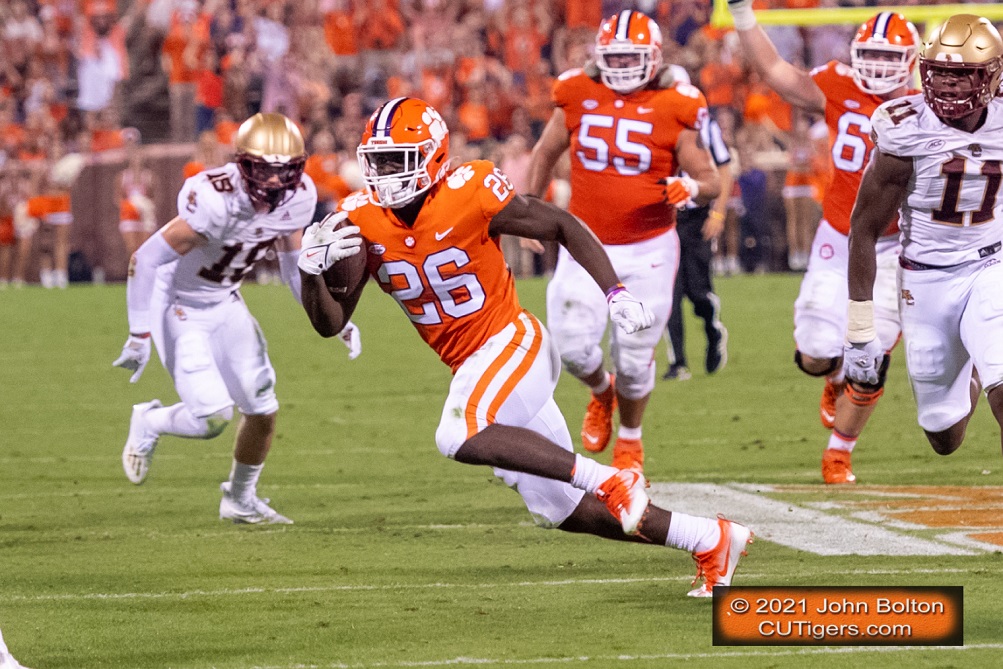 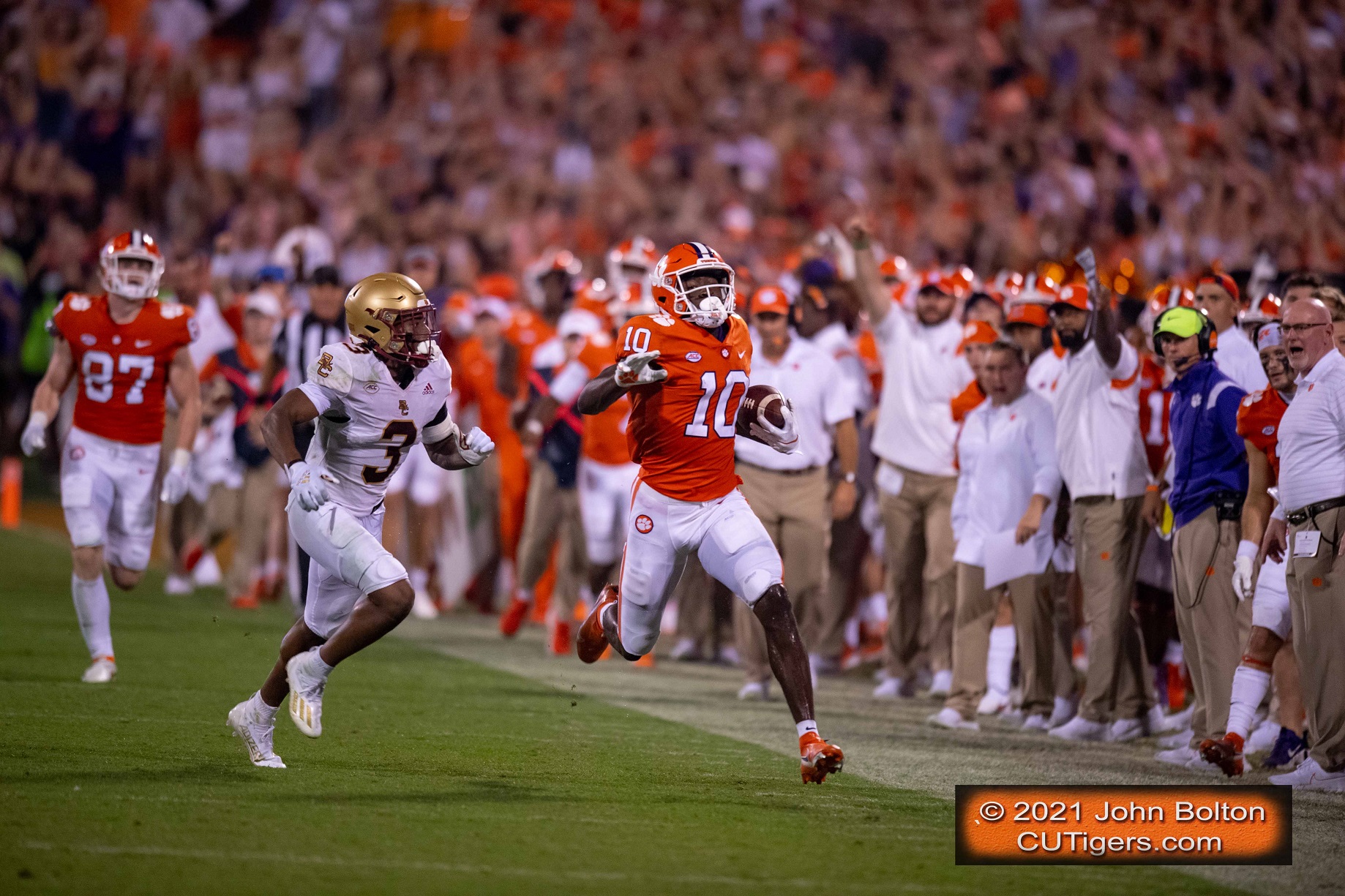 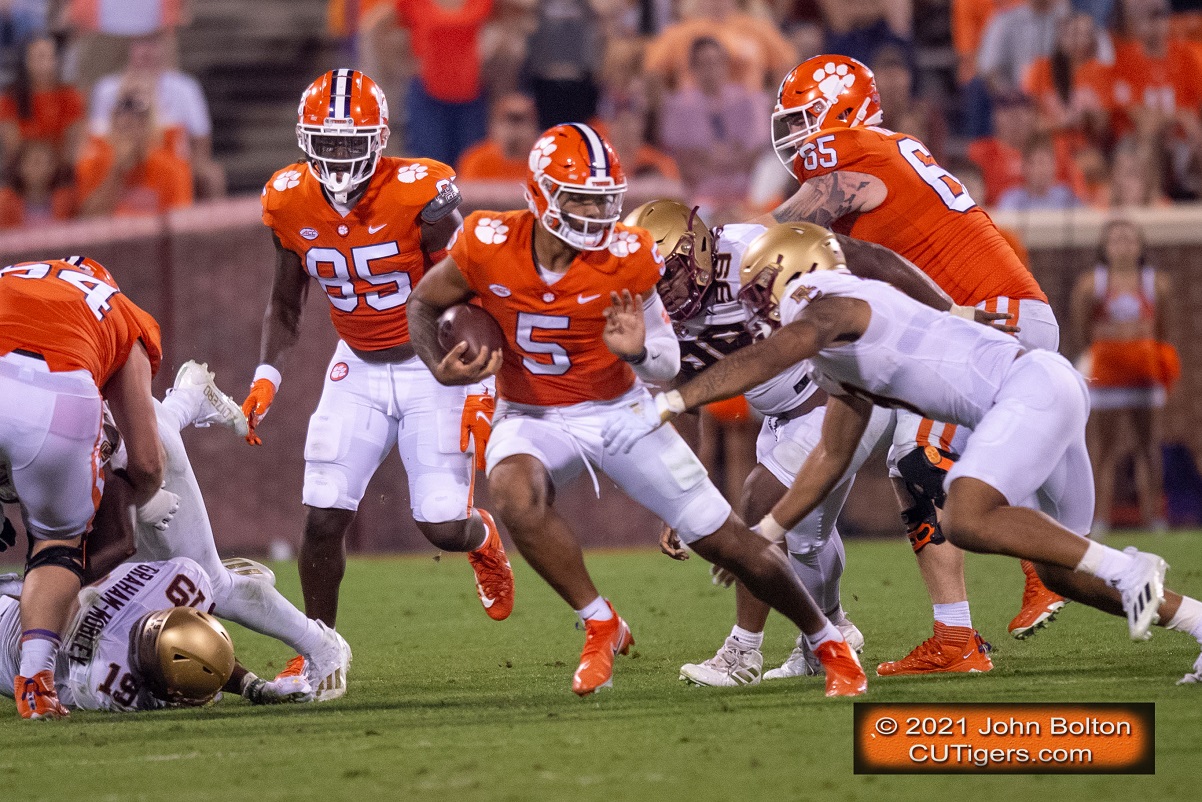 My score prediction this week was 27-13, so I nailed the score for BC, but had I known that the Tigers would be without Will Putnam the whole game as well as Justyn Ross, Davis Allen, Braden Galloway and Will Taylor in the second half, I would have been even closer on the other side. It's insane how many injuries to starters and key players the Tigers have already sustained in the first five weeks of the season. By my count, 11 starters have missed either entire games or substantial portions of games this season. They've been without starting safety Lannden Zanders all season, starting DT Tyler Davis has only played two games and will miss the next 4 or 5, the other starting DT, Bryan Bresee, is out for the season and Will Shipley will be out another couple games. As if the offense didn't have enough problems with youth, inexperience and mistakes, now they are starting to lose players left and right. Dabo told me after the game that Ross, who scored two touchdowns last week and left the game at the end of the second quarter, had a head injury, so at least it's nothing long-term. Will Taylor, however, injured his knee, and it didn't look good. We'll have to await the result of his MRI and find out from Dabo on our Monday evening Zoom call what the diagnosis is. Braden Galloway also suffered a head injury, and the other starting tight end, Davis Allen, was ejected on a targeting call on special teams. It occurred in the first quarter, so he will be able to start at Syracuse in two weeks. The open date next week comes at a perfect time with all of these injuries, and thank goodness the Tigers are going into it on a positive note with a win rather than back-to-back heartbreaking losses! With tough road games at Syracuse and Pitt coming up, let's hope the offense will use the time off to work on the fundamentals and get out of the funk it's been in. 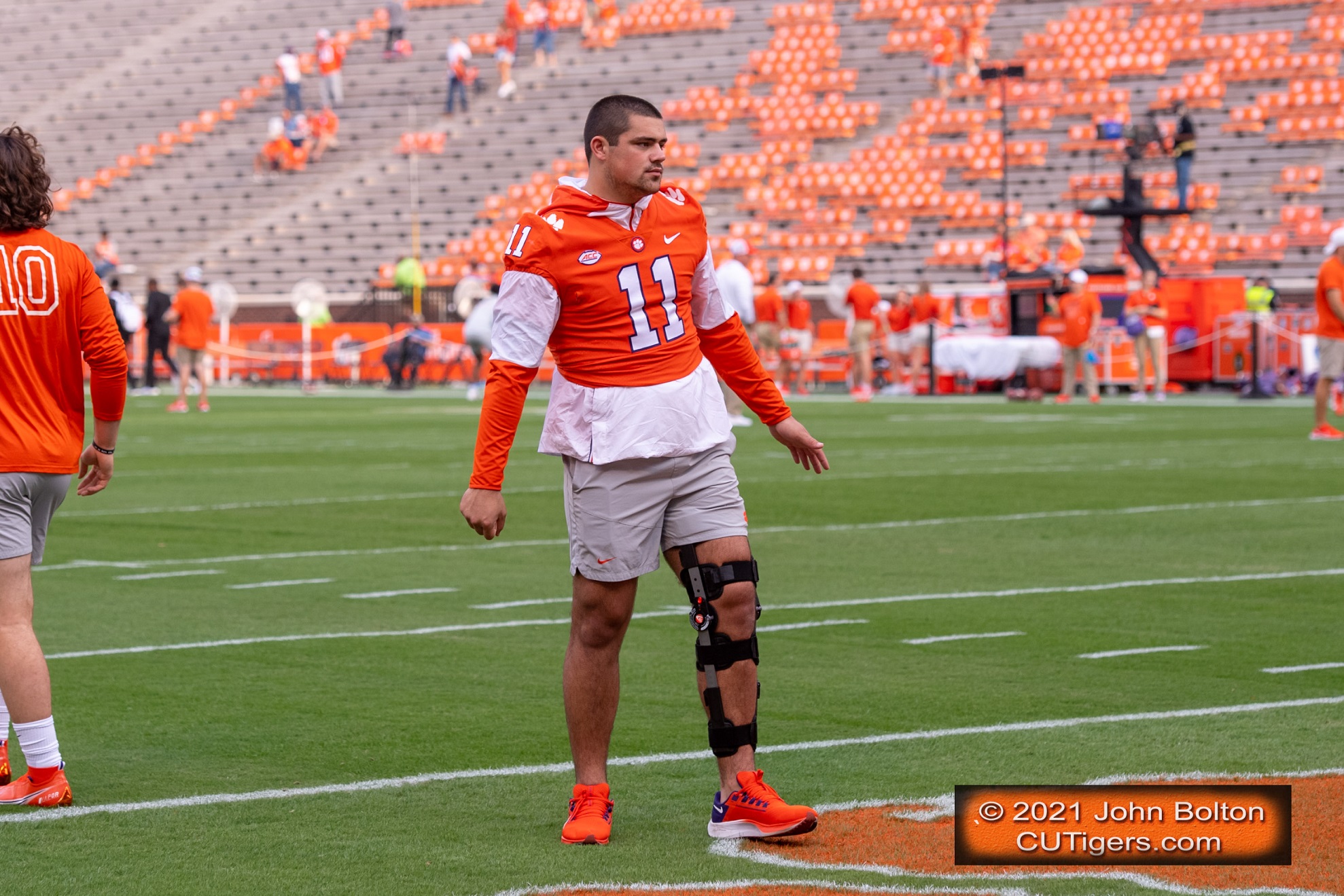 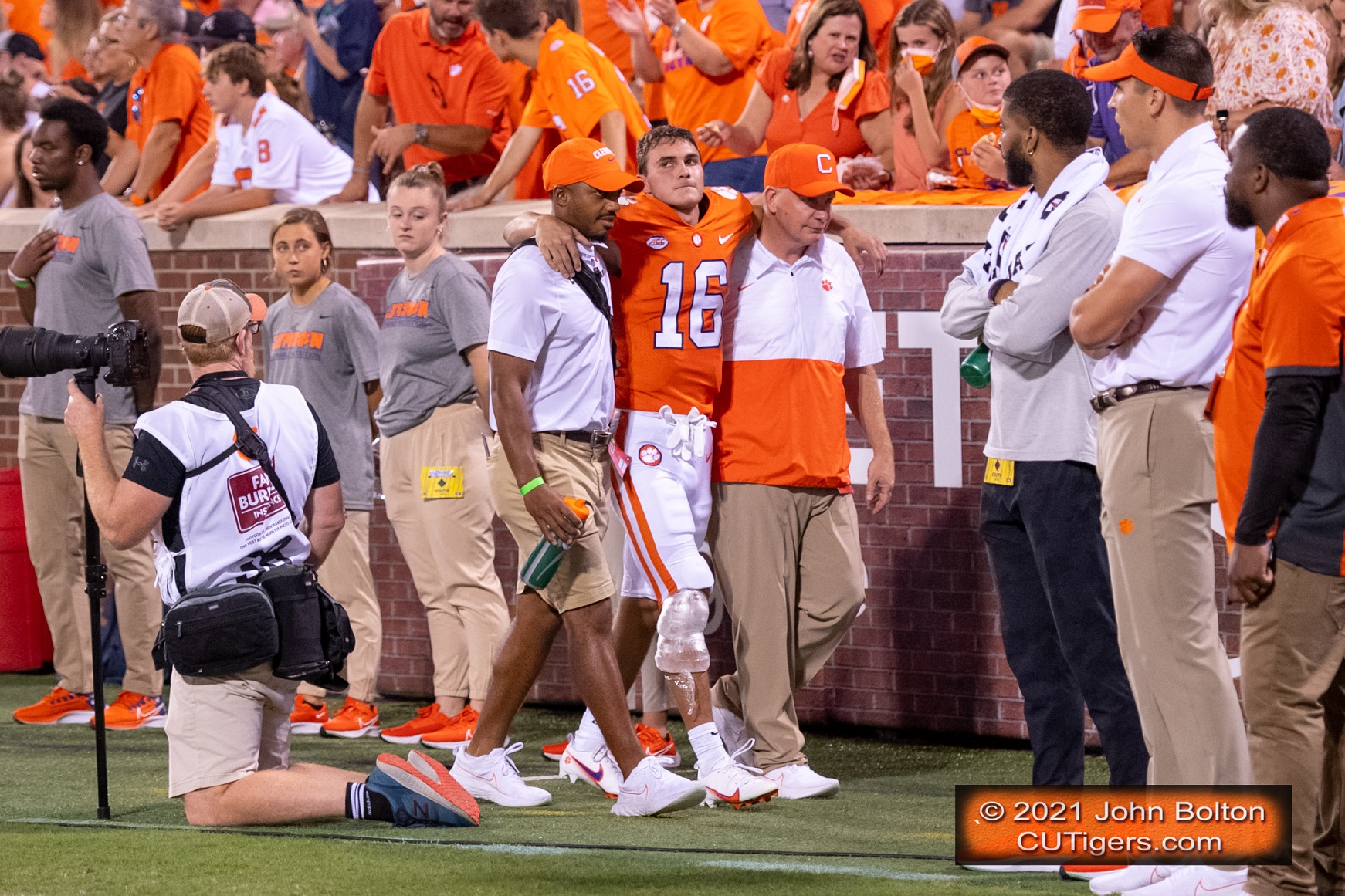 How about BT Potter? He had just 2 field goal attempts in the first 4 games with none last week, and he just calmly went 4-4 against BC when the Tigers needed every one of them! Dabo said after the game that he considered letting him attempt a 55-yarder in the second half but thought better of it with the way the defense was playing and decided to punt and try to pin BC deep. The special teams were outstanding with the exception of the blocked punt, and that was due to Davis Allen's targeting ejection in the first quarter. Ordinarily, he would be blocking that player, but his backup missed it and allowed the punt to be blocked. Fortunately, the defense came through as usual in the sudden-change situation and didn't even allow BC a field goal on the exchange. 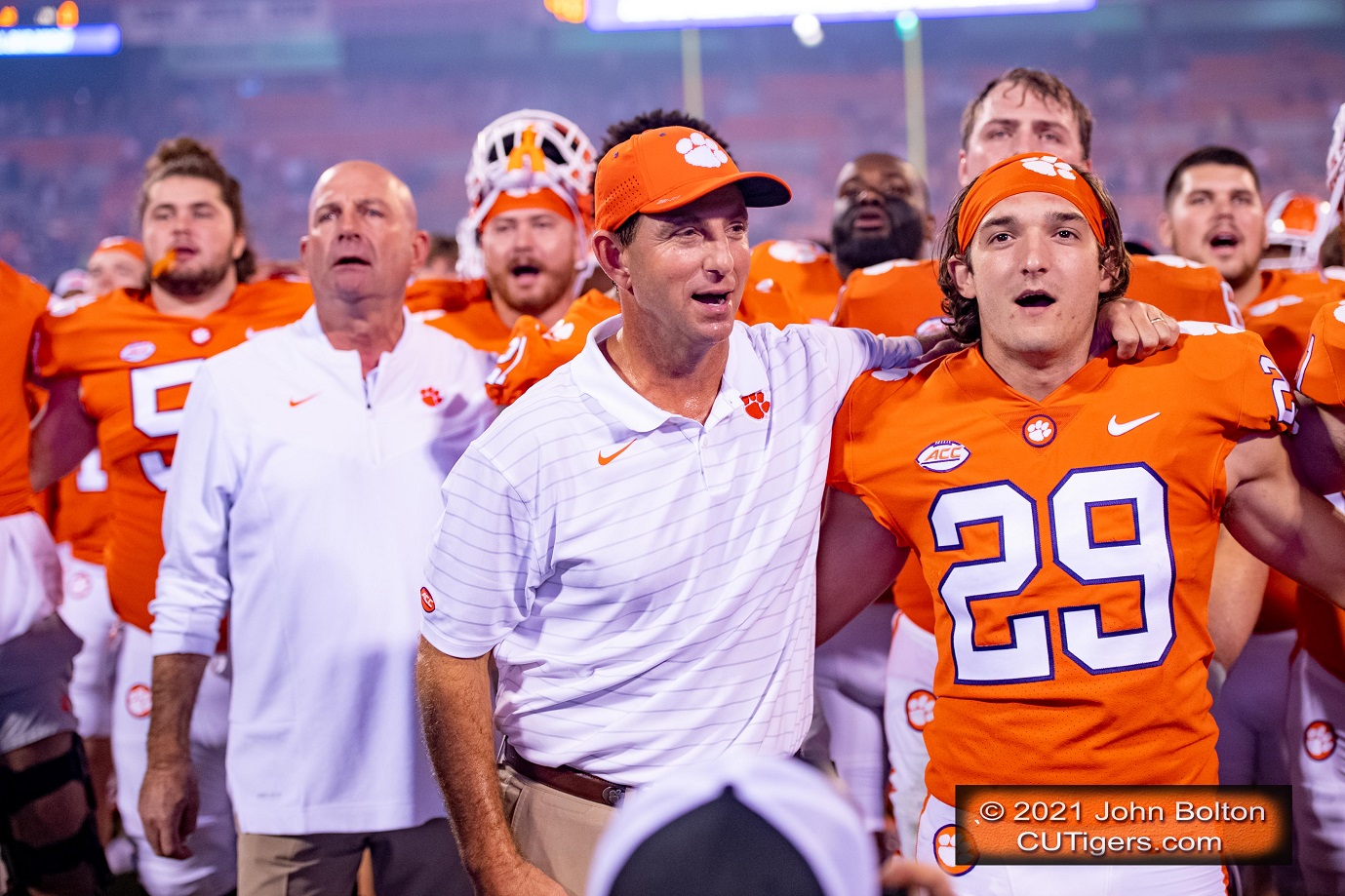 The Tigers' 31-game home win streak is not only the longest active streak in the nation but the longest in program history. It is tied with Yale and Texas A&M for the 14th-longest ever. The record is 58 by Miami, followed by 57 for Alabama under Bear Bryant. It was a fantastic Homecoming night in the Valley, and the 1981 National Champions celebrated their 40-year anniversary with Danny Ford (see below).
I'll have more analysis in a bit. In the meantime, Dabo's press conference, coach/player interviews, notes and highlights are below!