Whew! Are we getting used to this yet? The Tigers have played 5 FBS opponents, and all 5 have been one-score games. The Tigers survived, thanks to their defense once again, for their first road win of the season, 17-14 at Syracuse. Wide left has been a common theme in the Tigers' last two road games. At NC State, the Pack's all-time leading punter missed wide left twice, including the would-be game-winner. This time, it was Syracuse's all-time record holder, Andre Szmyt, who won the Groza Award as a freshman in 2018, to miss the game-tying field goal with less than a minute left. The attempt was from 47 yards, and his season-long was 48. The Tigers are a remarkable 30-7 in one-score games since 2011, the best win percentage in the nation over that span.
Offensively, it was more of what we've seen all season, and the bye week didn't seem to solve any of the chronic issues we've seen. Dropped passes on 3rd down, poor throws, penalties, inability to get push and convert on short yardage. It's like the same game is being replayed over and over again, with stellar defense and sputtering, mistake-riddled offense.
Fortunately, special teams have been a bright spot for the most part, and they made the difference for the Tigers for the second straight game. BT Potter made a clutch 40-yard field goal in the 4th quarter, which was the difference in the game, and Will Spiers made the play of the game on a fake punt call by Dabo in the 2nd quarter. On 4th and 5 from the 41, Spiers completed a pass for 17 yards to Davis Allen, and that led to a Kobe Pace touchdown with 9 seconds left in the half, giving the Tigers a 14-7 lead going into the locker room. And the Tigers have now won 54 straight games when leading at halftime! Incidentally, Dabo tried a similar fake punt pass by Spiers in the Carrier Dome back in 2017. Spiers, a former high school quarterback, made a good throw that time as well, but the play was unsuccessful. Then they ran the play against Syracuse again last year in Death Valley, and it worked. I'll bet the TV commentators didn't recall either of those plays from the past!
Another recurring theme this season has been injuries. I truly cannot remember the Tigers ever having this many starters and key contributors miss games or large portions of games due to injuries in a season, let alone in the first half of the season! Tonight, it was future NFL first-rounder Andrew Booth, who was a pre-game scratch due to a hamstring, as Dabo explained to me after the game. Tight end Braden Galloway was still out due to his head injury against BC almost 2 weeks ago. Starting WR EJ Williams, starting center Hunter Rayburn, CB Fred Davis and safety Joseph Charleston were all also out tonight!
I'll have more analysis and thoughts on the game in the morning as I travel back down south. In the meantime, our post-game interviews with Dabo, coordinators and players are below, along with notes and highlights! 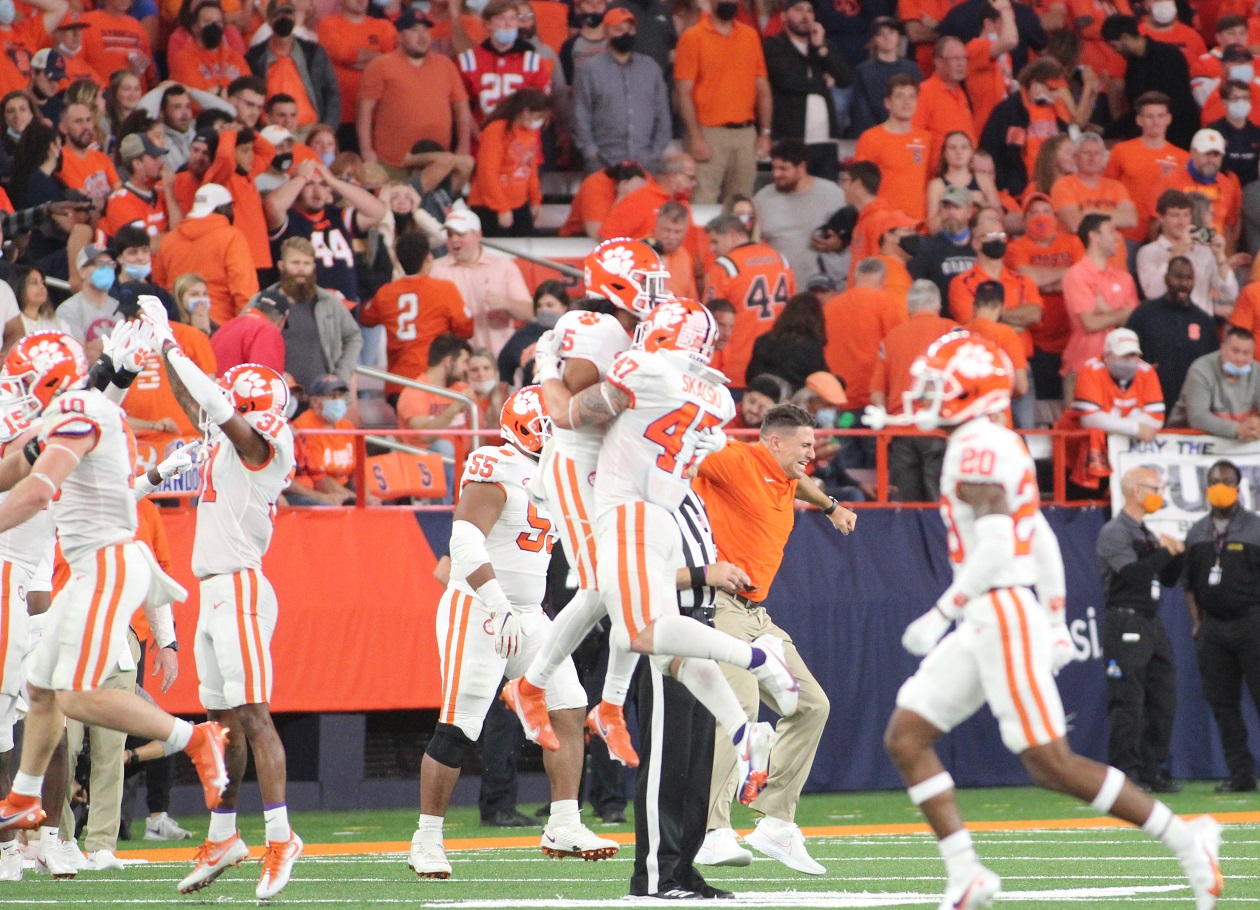