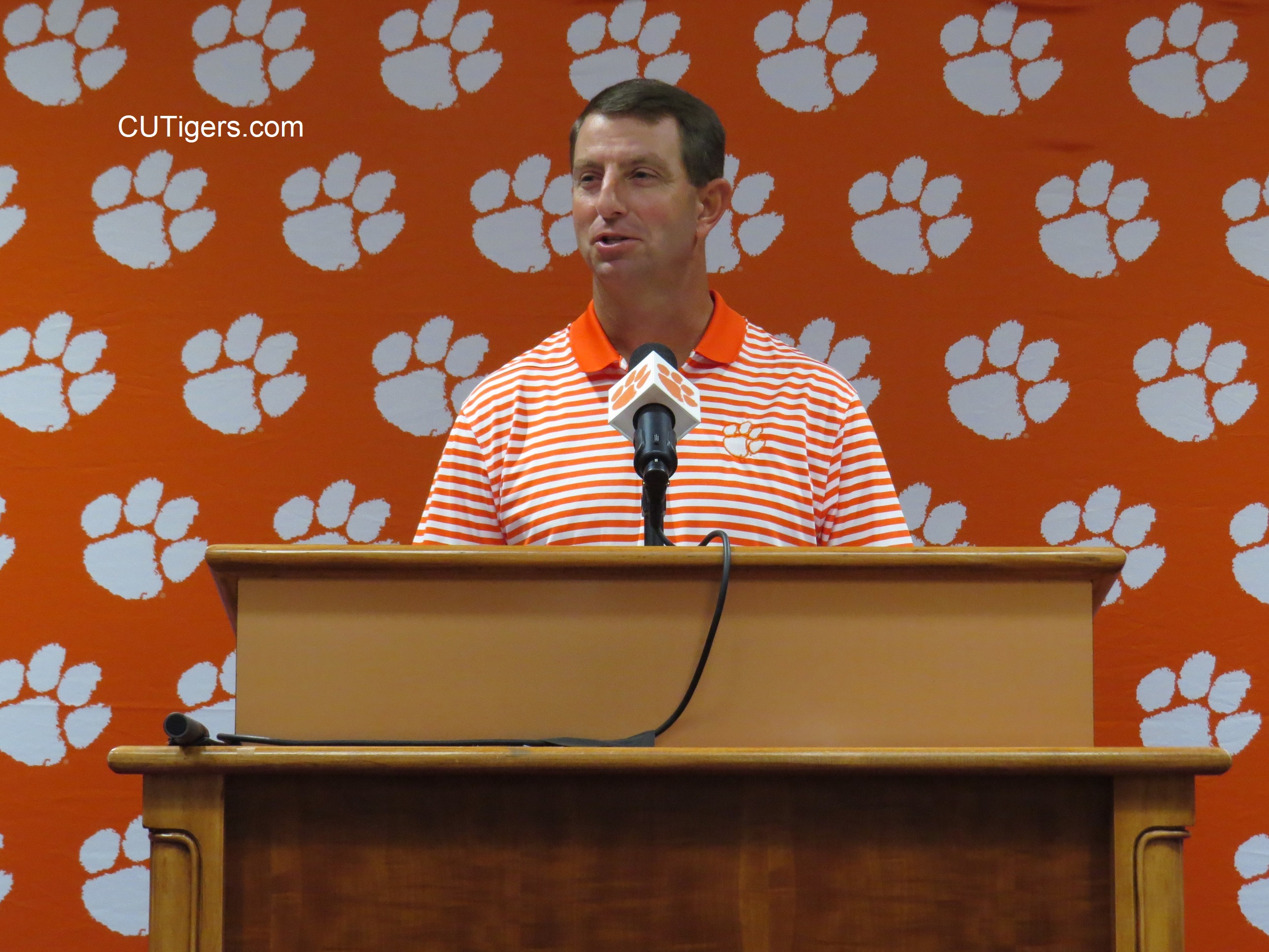 At our weekly press conference with Dabo this morning, I asked him how Kelly Bryant looked at practice yesterday, and he said he looked good. Dabo told us Sunday that Kelly would be in a green jersey on Monday, which doesn't mean much since the quarterbacks are no-contact all the time. We spoke with Kelly this afternoon following the press conference, and he said he feels 100%. In fact, he said, "I'm ready to play today!" You can tell he can't wait to get back on the field, and I'm sure watching Trevor Lawrence run the offense as well as he did on Saturday makes him all the more anxious to get back in action.
I also asked Dabo about losing Dorian O'Daniel and whether Isaiah Simmons had the tool kit to enable him to step up against the Tech offense in O'Daniel's absence. Dorian really shown against Tech over the last 3 seasons because of his unique athleticism at the linebacker position. Simmons is similarly gifted and even longer and stronger than O'Daniel was. This will be a good test for him in that nickel spot to see if he has the eye discipline to read and defend Paul Johnson's triple-option.
We also spoke with Austin Bryant, who recorded his first two sacks on Saturday, and Milan Richard, who caught his first two passes. Austin talked in depth about defending the Tech triple-option and how much discipline it requires. I asked him how good it felt to record his first two sacks of the season on Saturday and whether he and his friend, roommate and fellow bookend, Clelin Ferrell, had a friendly competition going on for sacks. Surprisingly, he said they never talked about personal sack numbers with each other. They sure like to race each other to the quarterback, thought!
Milan Richard caught a touchdown against Georgia Tech last season in the rain. Being a Georgia native, he talked about how special this game will be for him, playing in front of family and friends. I asked him if he was competing with Trevor Lawrence for tickets from teammates, and he laughed, saying that his mom handles all of the tickets for him so he can focus on what he needs to. Coincidentally, just after the conclusion of our interview, Milan showed me his phone, and his mom had texted him with a ticket update while we were talking!
You can watch Dabo's PC and our interviews in full below, and don't forget to check back on Wednesday for our post-practice interview with Dabo! I will also have my weekly game preview and prediction, What We Are Hearing published by Friday morning, so stay tuned!
MONDAY COACH AND PLAYER INTERVIEWS
WEDNESDAY ACC COACHES TELECONFERENCE (DABO AND PAUL JOHNSON)